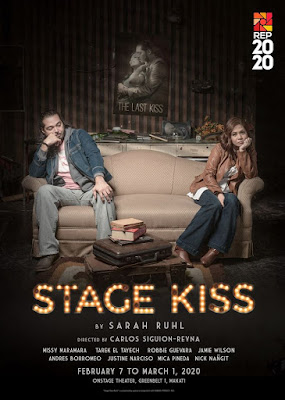 The unnamed female protagonist was coming back to stage after a long hiatus because she decided to concentrate on her family. On the first day of rehearsals, it turned out that her leading man was her ex-lover (also unnamed), and their roles (uncannily also about an unexpected reunion of two ex-lovers) required them to be lovers on stage. She was already dedicated to her finance specialist husband and feisty daughter Angela. He was already in a relationship with a pre-school teacher Laurie. Will all those stage kisses they share in this new play actually rekindle the old flame they had together all those years ago?

As She, Missy Maramara was such a natural at improvisations. I felt a lot of those wacky overly theatrical "acting" style of this female lead character was all spontaneously done in the moment, and these showed off her athleticism and her grace in stage movement, possibly acquired from doing yoga or Pilates. Her comic timing was also so faultless. The humor can get quite dark at times, especially in that scene when her character was "roughed up," but Maramara never missed a beat. 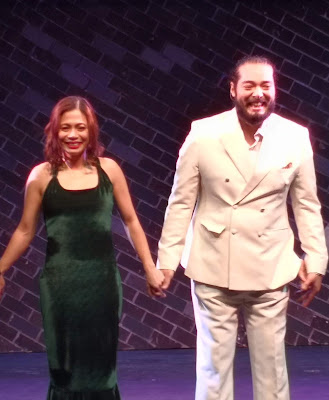 She (Missy Maramara) and He (Tarek El Tayech)

As He, Tarek El Tayech had the leading man stage presence, especially with his height, brawn and facial hair. He had  that roguish bravado and overconfidence about him that his character required. He was able to match Maramara in the improvisation department, as well as the proficiency in various accents. This resulted in very palpable chemistry when they are sharing a scene together, . This was especially true in those titular stage kisses they exchanged, which had heat and passion needed to make them realistically affecting.

Jamie Wilson was his reliable best as the play's director Schwabach, so dedicated to his craft, yet so corny in his taste and vision. Andres Borromeo was a riot as Kevin, the gay understudy who could not stand the kissing scenes. Mica Pineda played his girlfriend Laurie (in real life) and her girlfriend Millicent (in the play).  Justine Narciso played the daughter in real life (Angela) and in the play (Millie), as well as the maid (also Millicent, unnecessarily). Veteran actor Robbie Guevara played her husband whose story arc would turn out to be longer than anybody initially thought. 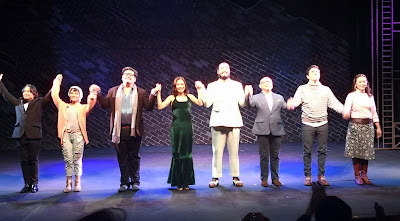 It seemed that based on the central characters' backgrounds, the actors playing them needed to be a bit older, maybe middle aged at least. However, casting younger attractive actors in the lead resulted in tangible romantic thrill the way the story played out  How that set design of His apartment (by Ohm David) served a double purpose later on was a stroke of writing genius. The play within the play, entitled "The Last Kiss," was set in the 1930s, so that gave Bonsai Cielo a chance to design some stylish vintage formal outfits, best of which was Her emerald long gown.

I enjoyed all the inside jokes Ruhl shared about actors and acting which made this show practically a satire about the theater industry. The flow of the story was not exactly smooth though. Just when you thought it was winding up, a totally new angle came up. What seemed to be a light comic romp in Act 1 transformed into a darker The whole concluding scene felt like it came from out of the blue. However, director Carlos Siguion-Reyna and his game cast managed to rise above these drawbacks in Ruhl's script and work wonders.