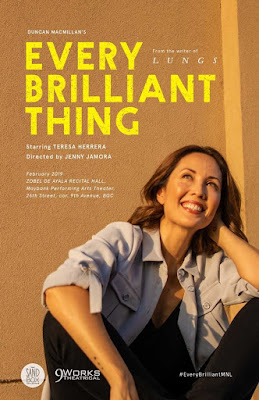 When Angela was seven years old, her mother attempted to kill herself (but survived). To cope with the devastating psychological torture of this unforunate event, she decided to list down every little thing that made life worth living for. She would regularly let her mom read her list of her favorite things to distract her (both of them actually) out from her depression.

Her list began simply at number 1 with ice cream, written in a sparkly pink notebook. But with time, as Angela grew up, went to college, met her boyfriend Sam and got married, the list grew and grew in number, from 200, to 1000, later well into six digits, with the items becoming increasingly specific and abstract. There had been a number of plays recently about the very serious topic of suicide. In 2016, Twin Bill came out with Andrew Hindraker's "Suicide Incorporated" (MY REVIEW). Last year, PETA staged Ian Lomongo's Filipino adaptation of Marsha Norman's "'Night, Mother" (MY REVIEW). Both plays were deadly serious, with humor just sprinkled in occasionally to break the intense tension of the scenes.

This newest production of the Sandbox Collective (on its fifth anniversary) in cooperation with 9 Works Theatrical (on its 10th anniversary) takes on the topic of suicide again, but this time  in a particularly unique style. "Every Brilliant Thing" was written by playwright Duncan McMillan (who also wrote "Lungs") and comedian Jonny Donohoe as a monologue for one actor (either male or female), and involved the audience seated around the stage to engage in various interactions with the actor. The surprise sponteneity of this set-up assured that every single show will have a different charm and humor from the last. 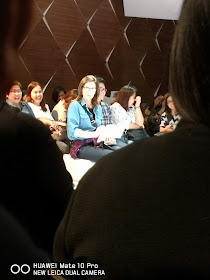 Angela tries to catch
Sam's attention at the library

For this show, the producers of Sandbox Collective had chosen to feature a female central character. I thought this was a wise decision because a female lead can connect better with a Filipino audience given the emotional nature of the script.

Angela was played by film and stage actress, TV host, and fashion model Teresa Herrera. The last time Ms. Herrera acted on the local stage had been way back 2011, and I had not seen any of ther past performances until this, her comeback project. Wow, she was so natural and carefree in her performance, as if she were not acting at all. The international dimension of her career (in New York, Hollywood, UK, South Africa, aside from Southeast Asia) reflected in the well-enunciated delivery of her lines. 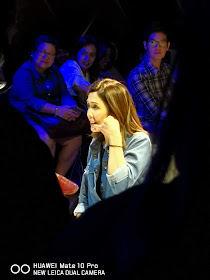 Ms. Herrera had to be a good judge of who among those seated around him would be able to deliver extemporaneous lines effectively. It is certainly not easy to tell a person's personality or the quality of his voice merely by looking at his or her face, so this choice was really just a matter of luck. Her audience picks for these supporting characters greatly influence the fun and flavor of the rest of the show.

On the show I watched, Herrera's choices for her favorite school teacher, her favorite college lecturer, her boyfriend Sam and her father all seemed so calm when they were called, and some were even able to come up with zingers or pithy lines off the cuff, which I  thought was truly amazing. (I imagine that I would have been shaking like crazy and stammering on every word if ever I was the one were called!) 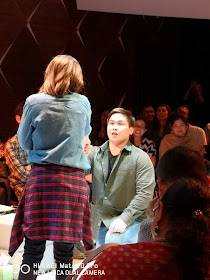 Before the show, almost everyone else in the audience was given a sheet of paper where an item on Angela's list was written. Throughout the play, Angela would call out different numbers, and that member of the audience should read his or her card out loud. Some cards contained a single word, while some were entire sentences.

Now this was a hit or miss part of the play because not everyone can read clearly or project their voices well without a microphone. There were several instances when I could not understand what was said, which was a real pity because I feel that I was missing out on some of McMillan's witty thoughts. Since I entered the theater late, I did not have a card to read so I missed out on this interaction. 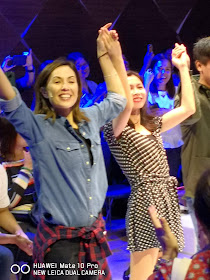 Herrera takes a bow with her co-players from the audience.


Kakki Teodoro will get to play Angela in at least two Saturday matinee performances (Feb. 9 and 23). She will reportedly use Filipino pop culture references in her version of this show, which makes it very interesting to catch. Ms. Teodoro is also an associate producer of this show.

Leading the creative team is director Jenny Jamora who had also lent a lot of her personality on how this play was presented. John Batalla designed the lighting effects. Arvy Dimaculangan's sound design included a lot of eclectic music choices, from Ray Charles to Chicago to Gustav Mahler, on vinyl. Marta Lovina's production design borrowed from the Sandbox production of "Himala the Musical" last year where props (this time Angela's numerous books and boxes) were scattered even in the audience areas in the round, so further draw the audience in the action.

Suicide had and will always be a touchy and morbid subject matter. "Every Brilliant Thing" manages to present it to in a lighter manner to engage the audience more. However, there were serious reminders about how to deal with the tragedy, particularly directed to practioners of mass and social media about how to cover suicide cases. There was also a talkback session after the show to discuss concerns about suicide with guest psychiatrists and mental health specialists. Suicide is certainly a negative event, but a play about it need not be without positivity. 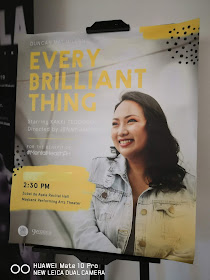 The original run of this interactive one-woman show was supposed to have been last week. It was certainly good news that they extended one more weekend because of enthusiastic audience response. I purposely chose to watch the 3 pm show today March 3, 2019 in order to catch only the third and last performance of Kakki Teodoro as the central character (I did not hear Teodoro refer to herself by a first name).

In contrast to Herrera's very all-American perspective, Teodoro decided to attack the role as a Filipino. She had her childhood in Manila, vacationed in Baguio, had her honeymoon in Pangasinan. Hence, there were a number of Filipino expressions and side-comments which caused us to identify with her more, sympathize with her more. She made us feel like she was our very own chubby little sister. Her 7-year old girl felt more childlike. Her happy moments felt more effusively joyful, delightfully mirthful. Her mood-swings felt more radical and drastic, which made you worry for her more.

Since this was supposed to have been Teodoro's final performance, she had a quite a number of theater friends in the audience for that show. Phi Palmos was called to volunteer as the veterinarian. Dennis Marasigan was called to volunteer as the father. Cathy Azanza-Dy was delightful as Ms. Patterson, with her sock dog puppet Daphne. Cris Villonco was funny as the strict College Lecturer who was stymied when asked to summarize the book she was holding. Elsewhere in the audience were Jon Santos (and his ready pencil), Robbie Guevara, Nonie and Shamaine Buencamino, Jennifer dela Cruz and Sen. Risa Hontiveros (who was part of the mental health panel during the talkback session after the show). 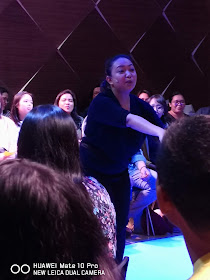 Kakki Teodoro engages her audience to participate in the action.

This is the second time I watched this show. Unfortunately (or not), I still I was not given a slip of paper with one of the "brilliant things" to be read during the show when the main character called out the number. Unlike the first show, they now gave patrons a microphone when it was their turn to talk so it would be more clearly heard all around the venue. One of my observations in my first review was that there were certain "brilliant things" that I could not understand because they were not read or projected clearly by some readers.

Since this is theater in the round, it really matters where you were seated during the show. From where I was sitting yesterday, I had obstructed views which sort of hampered my enjoyment of the whole experience. I could not see "Ms. Patterson's" face clearly because I was seated in the same section two rows behind her.  I could not see very well those scenes between the girl and her boyfriend Sam in the library because the guy who played "Sam" was on the same side of the round as me on the other end of the row. These were my favorite parts the first time I watched when my seat had a better view of these scenes.

So overall, both alternate actors Teresa Herrera and Kakki Teodoro gave heartfelt and affective performances as the central character. They were both very good actresses, but they managed to generate different feelings from me as a member of the audience, even if they were mouthing basically the same lines. That was how deeply and intensely they had both submerged themselves into this fragile character, each in her own unique way. Fascinating stuff.


Because of the positive response and demand, "Every Brilliant Thing" will have another extension for another weekend soon. Watch out for updates!