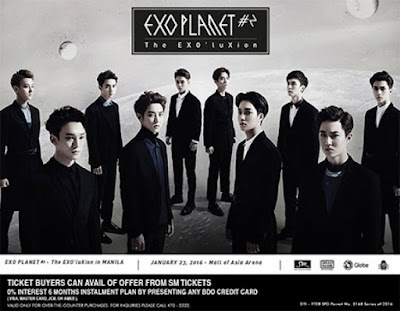 Thanks to my daughter, I have seen my third K-Pop concert within the last 10 months! First it was "Best of Best" (with Super Junior and Girls Generation) last April, then Infinite last November, and now this one. I thought the start of the promotion of this concert was so good. Flyers announcing it were distributed to still giddy fans coming out of the Infinite concert at the MOA Arena.

The excitement was so high such that seats quickly ran out during the pre-sale for Globe subscribers the day before the actual public sale! Consequently, I was only able to get front row Gen Ad tickets at the extreme side (Section 517). Due to public clamor, a second concert day was opened to accommodate thousands of disappointed fans (much like that of One Direction and Madonna).

I had to take a leave from work that whole Saturday in order to do my chaperone duties. That morning, my daughter had a volleyball match in a school in Manila with her varsity team. From there, after a quick takeout lunch, we went directly to SM MOA area already, together with my son who was going to experience his first KPop concert. Traffic was not as bad as we were afraid of, so we got there in less than an hour. 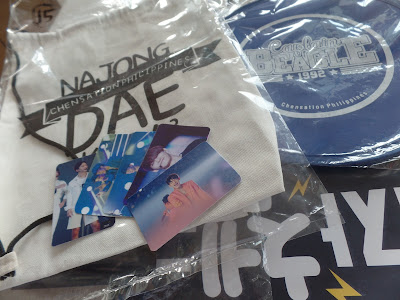 There were already so many girls also walking around wearing their EXO shirts, proudly displaying their EXO stuff. It turns out that my daughter had prizes to pick up from various fan group raffles she joined on Twitter. These giveaways were scattered all around the MOA from the E-Com Center to the main mall to the Arena itself. It felt like we joined an scavenger hunt walking around looking for these meetups -- exhausting for the senior chaperone, haha!

We ate an early dinner by 5:30 pm before heading off to the Arena. Of course, there were already so many people there. It was only past 7 pm before they allowed fans to enter the concert venue proper. The last fans allowed to enter were the ones in the standing room VIP sections around the large stage set up on the floor. The fans were really very very high with anticipation. They were cheering every video that was shown on the screens -- from S.M. Production ads as well as MOA Arena concert rules VTR. 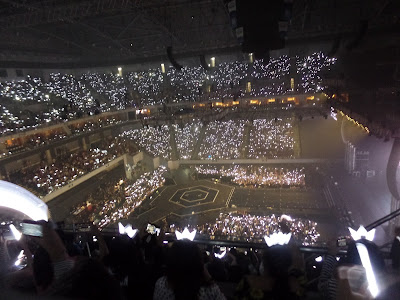 By 8 pm, the house lights dimmed and the venue became a shining ocean of silver lights. The official elaborate space-themed concert intro video began to play accompanied by the fangirls' screaming pandemonium reverberating all over.

The boys entered the stage wearing gold coats over white shirts and black pants. The opening salvo was a trio of big hits "Overdose," "History" and their new hit from 2015 "El Dorado." From the get-go, we already got a dose of the problems which we will plague our concert experience for the rest of the night.


One, the sound quality in our section was terrible. I barely hear anything from the boys at all. I can only recognize songs when the audience was singing the words along. The loud singing of the crowd also made the boys' singing practically inaudible in our area.

Second, the fans in the back row of the Upper Box in front of us were very inconsiderate. Instead of staying on their seats, these girls ran over to the stairwell in front of them and covered our only view of the projection screen. No amount of shouting at them by the entire Gen Ad section behind me would make them budge until most of them sat down much later in the show. A particularly stubborn and shameless girl with a brown backpack and iPad NEVER sat down. Not a few people around me were taunting her to jump. A few wanted to throw her water bottles to hit her, but no one actually dared.

The first time the boys lined up onstage to talk to the audience, the sound problem and our inability to see them close up on the big screen continued to plague our enjoyment of the show. We barely heard them speak. To make matters worse, the female English interpreter had a thin squeaky (think Mickey Mouse) which was unintelligible as well. I personally did not understand anything said in these spiels, and there were four of them throughout the show. I only saw their faces in the last one, just before the show ended, only because by then those pesky girls in front of us had already sat down. 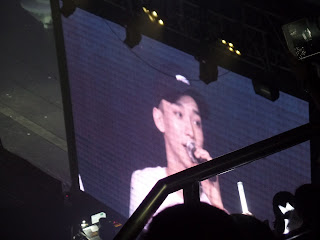 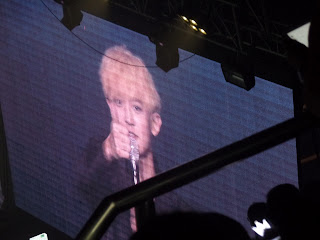 The following numbers (like "Don't Go" and the set following it) were danced in the hexagonal stage at the end of the long catwalk from the main stage. The audience was enthralled by the elevating sections of that stage and the colorful lights show further enhancing those songs. The boys paired off by twos in various parts of the stage and had spot dance routines with each other.

The dancing, the stage design and the lights were amazing, but unfortunately the singing could not be heard clearly from where we were. Ending this section in a unique fashion was the gentle ballad "My Answer," sung by D.O. and Suho with Baekhyun playing the piano on a small stage that moved around the main stage. 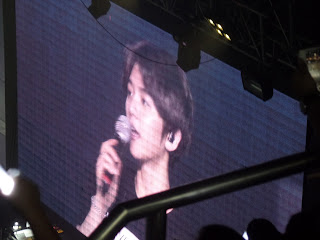 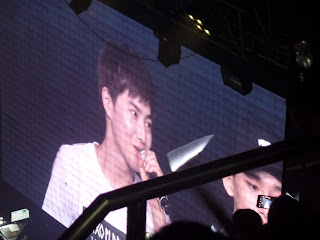 During the break, the boys changed into dark red coats and black shirts underneath. Unfortunately for us, we hardly saw this next set of songs (like "The Star" and "Exodus") because they were being performed on a tiered metal frame located deep on the main stage. The tickets of these seats beside the stage with partially obstructed views should really be sold at a lower price that the other seats in that level. It is not definitely not the same concert experience here on the fringes.


For the next set, the boys came out wearing funny-looking red Mickey Mouse-like ears, singing songs like "XOXO".  Of course, the girls in the audience found it all very cute. I was chuckling to myself as I wonder what the boys themselves really feel like during this section of the show. After this, there was slight break when the boys teased their female fans by changing their brown shirts into white t-shirts behind a white screen on center stage. They then charged out of the screen in a rain of golden confetti, and sang a couple more songs. Then went to sing some Christmas-themed songs, like "Miracles of December." 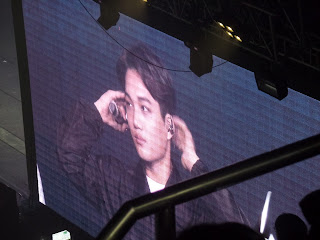 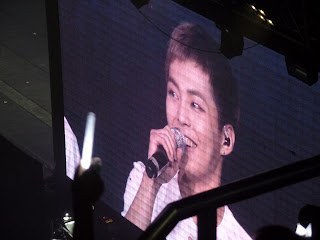 The next segment of the show was the most visually spectacular. There was this diamond-like metallic pod that Chen entered in the middle of the hexagonal stage. Then he DJ'ed renditions of high energy remixes of hits like "Drop That" and "Let Out the Beast" among others that had the audience jumping. The lighting of the stage during that part was psychadelic and exciting. Too bad the sound quality of the audio never improved.


In the next segment of the show, the boys changed into grey-striped coats over a white t-shirt and black pants or shorts. The next three big hit songs "Call Me Baby", "Growl" (VIDEO) and  "Love Me Right" (VIDEO) were accompanied with some very nifty dance moves. This was my personal favorite part of the concert. 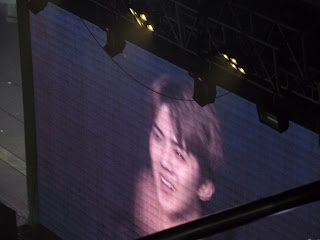 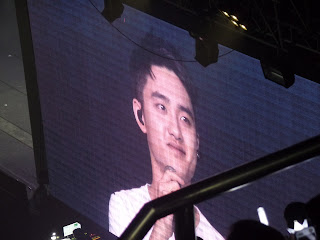 The boys came back on stage to say more messages to their fans. Mercifully, we can now see their faces on the big screen because those inconsiderate girls in front of us (except the brown backpack girl) sat down on the floor. It was only now that I can see their faces more clearly and take photographs of them.

They sang "Sing for You" and a couple more ballads and suddenly, without warning, it was already the end of the show. You will see what obstruction I mean when you watch the video. It was really very annoying. However, I did not realize this part was already the encore part of the show. The final song "Angel" was the final song of the whole show. There was a big shower of confetti all over the theater to mark the end of another extravagant and very successful Kpop show. 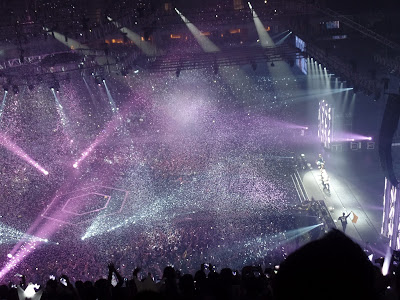 As this show ended, I was impressed with the boys' skill in dancing and the elaborate production value. Too bad though that I was not actually able to hear them sing. I was disappointed how this show turned out for us up there in Section 517. Actually we had the same bad experience when we watched the NKOTBSB show in approximately the same place, and barely heard the music nor the singing.

Therefore we conclude that we should never again watch a show in those nether-sections presumably behind the speakers of the SM-MOA Arena. I wonder if the Arena technicians are aware of this sound issue which apparently never addressed all these years. The price of those seats are the same as the other seats in Gen Ad and so people there should hear the same thing everyone hears around the whole Arena. 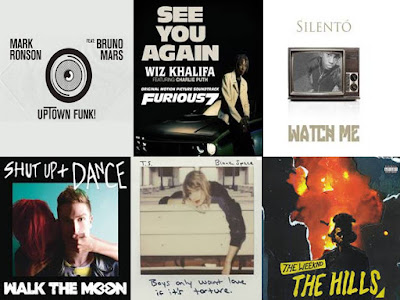 Here are the Hot 100 Singles of 2015 as ranked by Billboard Magazine. This year-end recap is based on Billboard Hot 100 chart performance during between the Dec. 6, 2014 and Nov. 28, 2015-dated charts. This is a list of last year's most popular songs across all genres, ranked by radio airplay audience impressions and sales data as measured and compiled by Nielsen Music, and streaming activity data provided by online music sources.