Recap of JASON DERULO Live in Manila: Energy and Exuberance 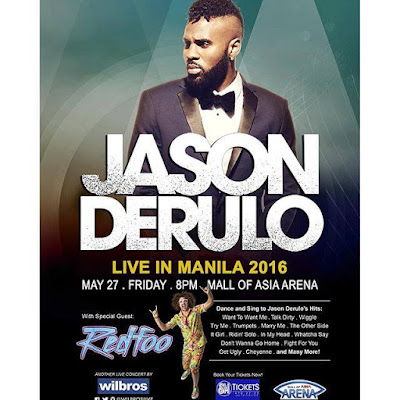 Unusual for a concert of an artist at the prime of his career, the MOA Arena was not a full house last night at the Jason Derulo concert. Ticket sales must have been bad, since General Admission was closed down and ticket holders were upgraded to Upper Box.

When the crew of front act took the stage by about 8:30 pm, there were still a lot of vacant seats all over the venue. Red Foo (of LMFAO) and his gang really tried his best to pump up the energy of the audience and it worked. People were up and dancing most of his hour-long set of mixes of his catchy, hi-energy original material. Most were not really familiar to me, except for his #1 hit "Party Rock Anthem" (VIDEO). 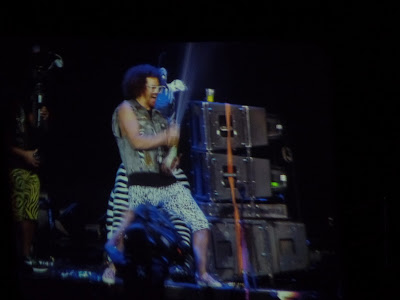 They really had a lot of gimmicks to engage the audience frenzy. They had smoke effects, numerous confetti showers, champagne spraying, blow-up animal toys (including two giant zebra dolls) which they threw out into the VIP audience to their delight. Red Foo even invited a number of girls from the audience to dance with him on the stage. I was surprised at the daring of these initially shy-looking girls when got into the groove of the beat and started their twerking! (VIDEO)

After the Red Foo set, they needed about 20 minutes or so to clean up all the confetti off the stage. Then Jason's official DJ Jae took the stage and started to re-energize the audience with his mixes of popular chart hits of other artists from Rihanna to Silento to Bieber which got the crowd singing and dancing along. It was already about 10:30 pm when finally, Jason Derulo himself got on stage.

He opened with his 2013 #14 hit "Trumpets". "Wiggle" (#5, 2014) and "Get Ugly" (2015) followed with Jason showing off his def dance moves with his crew. After a short break featuring his female dancers, Jason returned with a gentler beat with "Marry Me" (2013) sung with colorful stained glass windows in the background.

Then he did a throwback with his first ever chart hit in 2009, a song that went all the way to #1, "Whatcha Say" (VIDEO). A couple more of his older hits followed with "Ridin' Solo" (#9, 2010) and "In My Head" (#5, 2009), all very well received by the crowd. For the next song "It Girl," a girl from the audience was called to join Jason onstage. She was a big girl but very charming as she hugged Jason several times and even got to show off her dance moves. Too bad, Jason did not engage her in conversation, but she was visibly thrilled about getting close to her favorite singer.


When Jason came back onstage after a short musical interlude, he was shirtless, showing off his physique with the requisite abs. The song "Breathing" was performed in red light and had a really intense vibe with the choreography. Jason then sat on the edge of the stage and introduced this song which he called "a song currently #1 in the Philippines." It turned out to be his solo version of a Little Mix hit ballad called "Secret Love Song" (VIDEO) on which Jason was a featured artist. He ended this set with "If It Ain't Love" his latest Billboard chart hit in the US.

The next song "The Other Side" started with what seemed to be an empty stage with just a hooded figure in the shadows. By the time it reached the chorus though, the lights opened and Jason surprised everyone by performing at the back of the orchestra section! He returned up the stage to sing "Cheyenne". This was another well-choreographed number with excellent lighting effects and eerie accompanying video in the background. 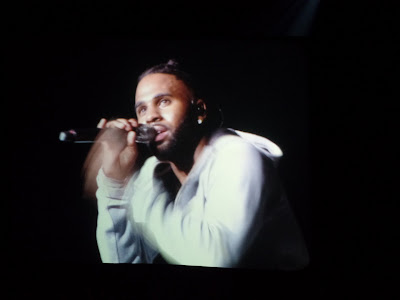 Jason Derulo chats with his fans

It was already past 11:30 when Jason got to sing his two biggest recent hits in succession "Talk Dirty" (#3, 2013) (VIDEO) and finally the very danceable "Want to Want Me" (#5, 2015). The show simply ended there after his thanks and goodbye, with no more encores.

I went to this concert primarily to accompany my two teenage boys, but I realized I also actually knew a lot of his songs myself (though I could not really sing along to them, haha!). It was a good energetic boost-me-up concert that left the audience on a natural high.