Recap of OSCAR SHOW 2014: Of Pizzas and Selfies 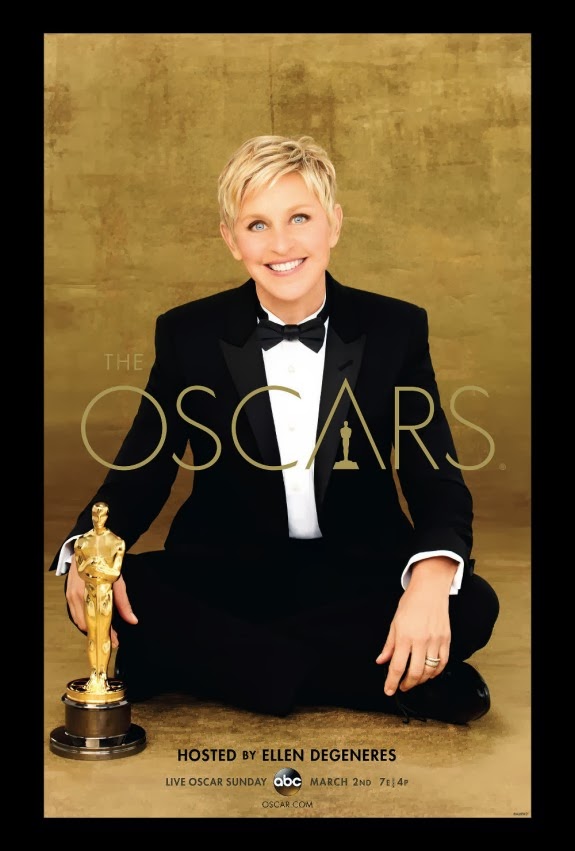 Ellen Degeneres is the Oscar host for a second time.  No big musical number to open the show, just a light-hearted funny monologue like only Ellen can deliver.  Her funniest line for me came at the end of her spiel:  "Jonah Hill.. You showed me something in that film I haven't seen for a very long time!" LOL!

Anne Hathaway presents Best Supporting Actor. Award goes to Jared Leto, as expected. Got it! Leto, whom Ellen called the "prettiest" of the night, was far and away the favorite among the four nominees. He dedicated his award to his mother, who was a single parent. It was all very touching. He also even thought of dedicating his award to Ukraine and Venezuela too.

Jim Carrey mimics Bruce Dern, not too funny. He introduces a tribute to animated movie heroes, from the Incredibles to Gru. Ellen noted there was no "Finding Nemo" in the montage.

The very pregnant Kerry Washington introduces Pharell Williams to sing "Happy" as the first Best Song nominee. He has his signature hat again this time. He was able to get everyone up on their feet and dance -- even the big superstars!  Earlier at the red carpet, Pharell wore shorts with his tux, causing a fashion ruckus.

Samuel L. Jackson and Naomi Watts present Costume, Hair and Makeup. Costume goes to The Great Gatsby (Got it wrong. Too bad I changed my first guess!) Oh, the winner is Baz Luhrmann's wife! She got her speech out from her bra. Hair and Makeup goes to Dallas Buyers Club, as expected. Got that right. No way the award is going to a "Jackass" film.  Too bad "American Hustle" was not nominated.

Emma Watson and Joseph Gordon Levitt for Visual Effects. Oscar goes to "Gravity"! I got it.

Zac Efron introduces Karen O singing the "Moon Song" from "Her" (VIDEO). She was in a scarlet ball gown.  She was singing while sitting on the steps of the stage beside an acoustic guitarist. What an enchanting voice she has!

Kate Hudson and Jason Sudekis present awards for Short Films. Live Action goes to "Helium". Documentary Short Subject award goes to "The Lady in Number 6: Music Saved My Life." It was touching to know that the subject of the film just recently died at age 110. Lucky guess on "Helium", and images shown make me want to watch it. Got the second one wrong, though I would have picked it had I known it was about a Holocaust survivor.

Bradley Cooper for Documentary Feature. Winner is "20 Feet from Stardom". Have to watch that now. Documentary subject Darlene Love belted out her thanks via song on behalf of backup singers!

Ewan Mc Gregor and Viola Davis for Foreign Language Film. Oscar goes to "The Great Beauty" This is the 11th Oscar for Italy, first since Life is Beautiful. Got this one correct.

Ellen comes out in a white tux. Introduces a man who needs no introduction -- Brad Pitt. Pitt introduces U2 who will perform next. Bono and the guys come up with an electrifying live rendition of "Ordinary Love"! 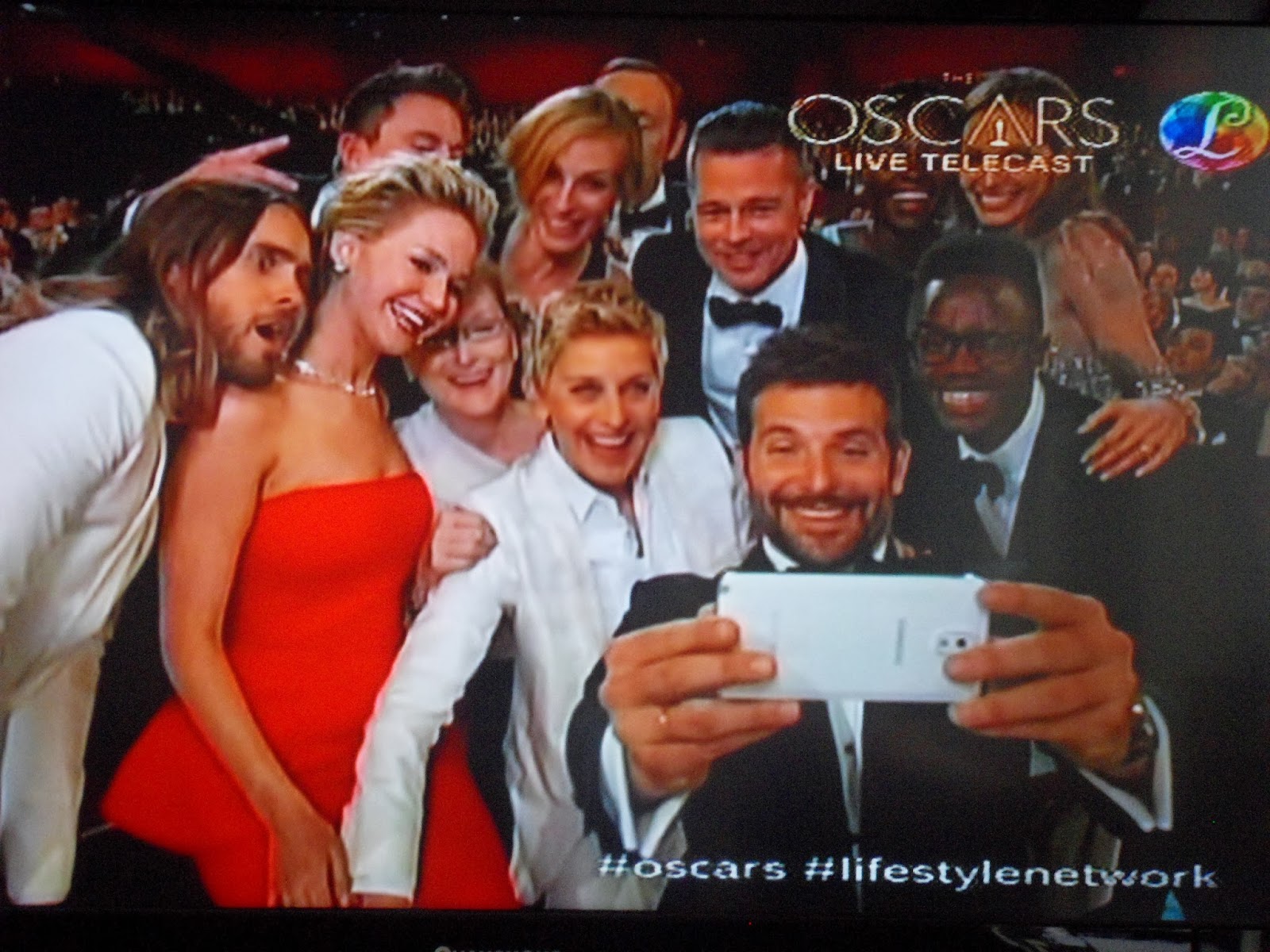 The Selfie of all Selfies

Ellen takes a selfie with Meryl Streep and other star nominees get into the photo too. Very nice moment. She wants it to be the most retweeted photo and succeeds. This post supposedly tied up Twitter for ten minutes.  I am wondering who on earth is that daring black guy on the right of Bradley Cooper?  He is no one I know, that is for sure.

Kristen Bell and Michael B. Jordan present the Science and Technology special awards.

Christoph Waltz presents Supporting Actress award. Oscar goes to Lupita Nyong'o! Got it right, though I wanted JLaw to win. Lupita gives a very touching speech, "No matter where you are from, your dreams are valid!"

Ellen brings a pizza guy in and distributes them among the superstars in the front rows! Another unprecedented stunt by Ellen.  Good thing the stars are game!  Including Harrison Ford and Meryl Streep.  Brad Pitt was up distributing plates. Leonardo di Caprio though declines when offered.

The Academy president gives her address.

Amy Adams and Bill Murray for Cinematography. Murray sneaks in attribute to Harold Ramis. Award goes to "Gravity"! Got that right.

Anna Kendrick ("The Cup Song" played in the background as she entered) and Gabourey Sidibe for Film Editing. Winner is "Gravity"! Got it! Cuaron's first Oscar but he failed to speak as his partner used up all the time.  I guess they somehow knew Cuaron had another award coming. 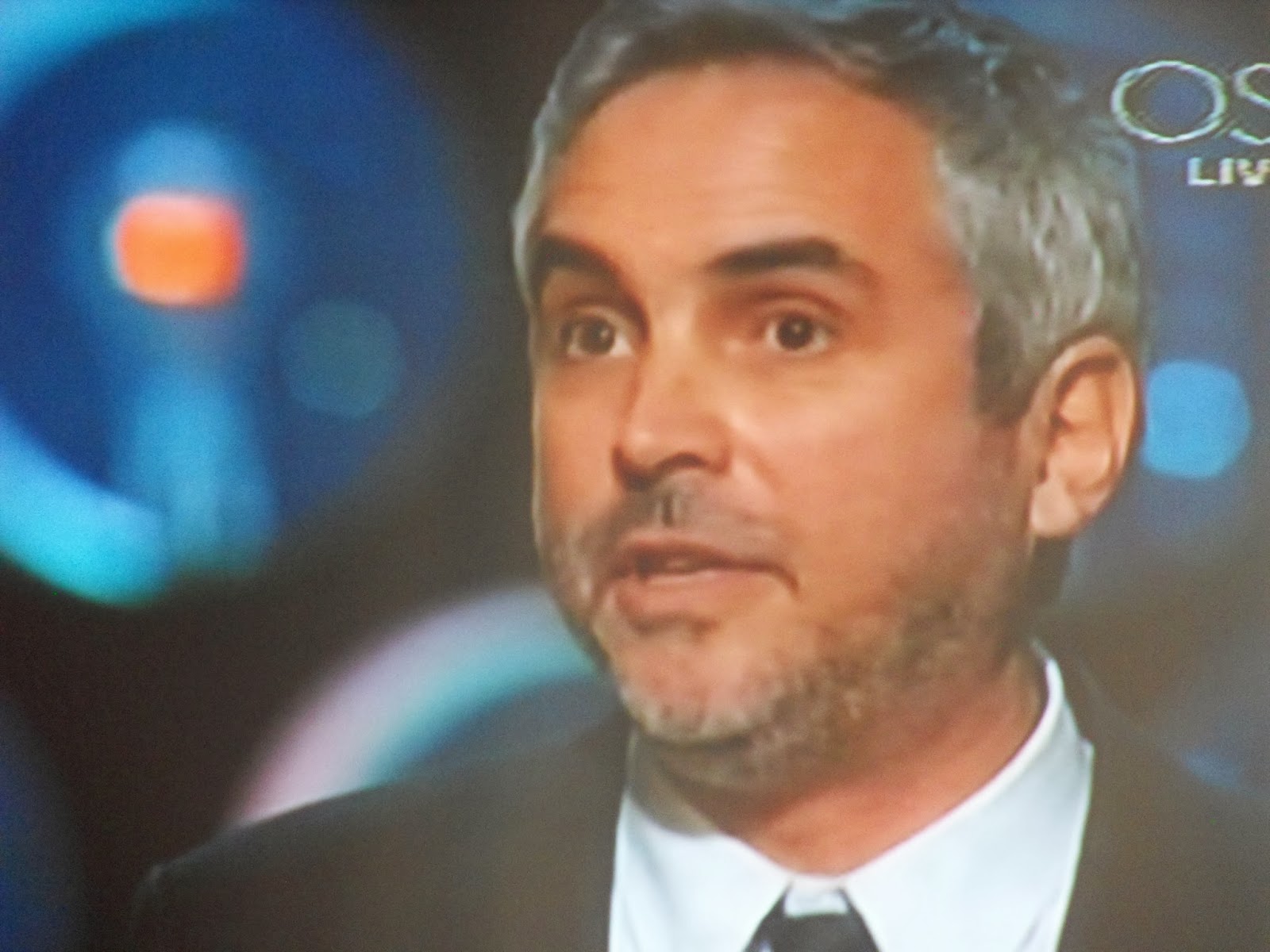 Whoopi Goldberg pays tribute to the 1939 classic "Wizard of Oz." She shows off her ruby slippers (and striped socks). Judy Garland daughter Liza Minneli and her siblings stand to be recognized. Introduced Pink to sing "Over the Rainbow" (VIDEO). Though it was not perfect in breath control, that was quite a passionate rendition she had.

Ellen comes out in a pink fairy costume. Now that was corny!

Jennifer Garner and Benjamin Cumberbatch for Production Design. Winner is "The Great Gatsby" again! Got this one. Double win for Catherine Martin, who also won for Costume earlier. She is the first woman to win two awards in one Oscar night on two different years. She first won a double before for "Moulin Rouge".

Bette Midler comes out to sing "Wind Beneath My Wings" (VIDEO). She looks and sounds very good despite a long absence in the public eye. Standing ovation. Bette in tears.

John Travolta says a totally different name (massive fail!) when he introduces Idina Menzel to sing "Let It Go"! She was really straining in that last high note. She did not seem too pleased with her performance. But the audience gives her a standing ovation anyway for her valiant effort to sing that impossibly difficult song.

Jamie Foxx and Jessica Biel for Original Score. Oscar goes to "Gravity"! Got that correct! That film had incredible music really!

For Original Song, the winner is "Let It Go"! Fil-Am composer Robert Lopez is now an EGOT! He delivered a very sprightly speech with his wife and co-winner Kristen. I thought U2 would pull a surprise as they are super popular, and their song was also very good.

Ellen passes Pharell's hat around to get money for the pizza. Harvey Weinstein gives $200. Brad Pitt grudgingly gave three $20 bills.  Lupita Nyong'o donated a bottle of her makeup, which Ellen puts in her pocket.

Angelina Jolie and Sidney Poitier come on stage. Standing ovation! It has been 50 years since Poitier won his Oscar. Best Director goes to Alfonso Cuaron for "Gravity", as expected. Now finally he gets to deliver his acceptance speech.

Daniel Day Lewis presents Best Actress to Cate Blanchette. Standing ovation. Gave tributes to all co-nominees one by one, which was nice. Calling Julia Roberts, she said "Hashtag suck it! You know what that means!" Whatever that meant, it got a good laugh. 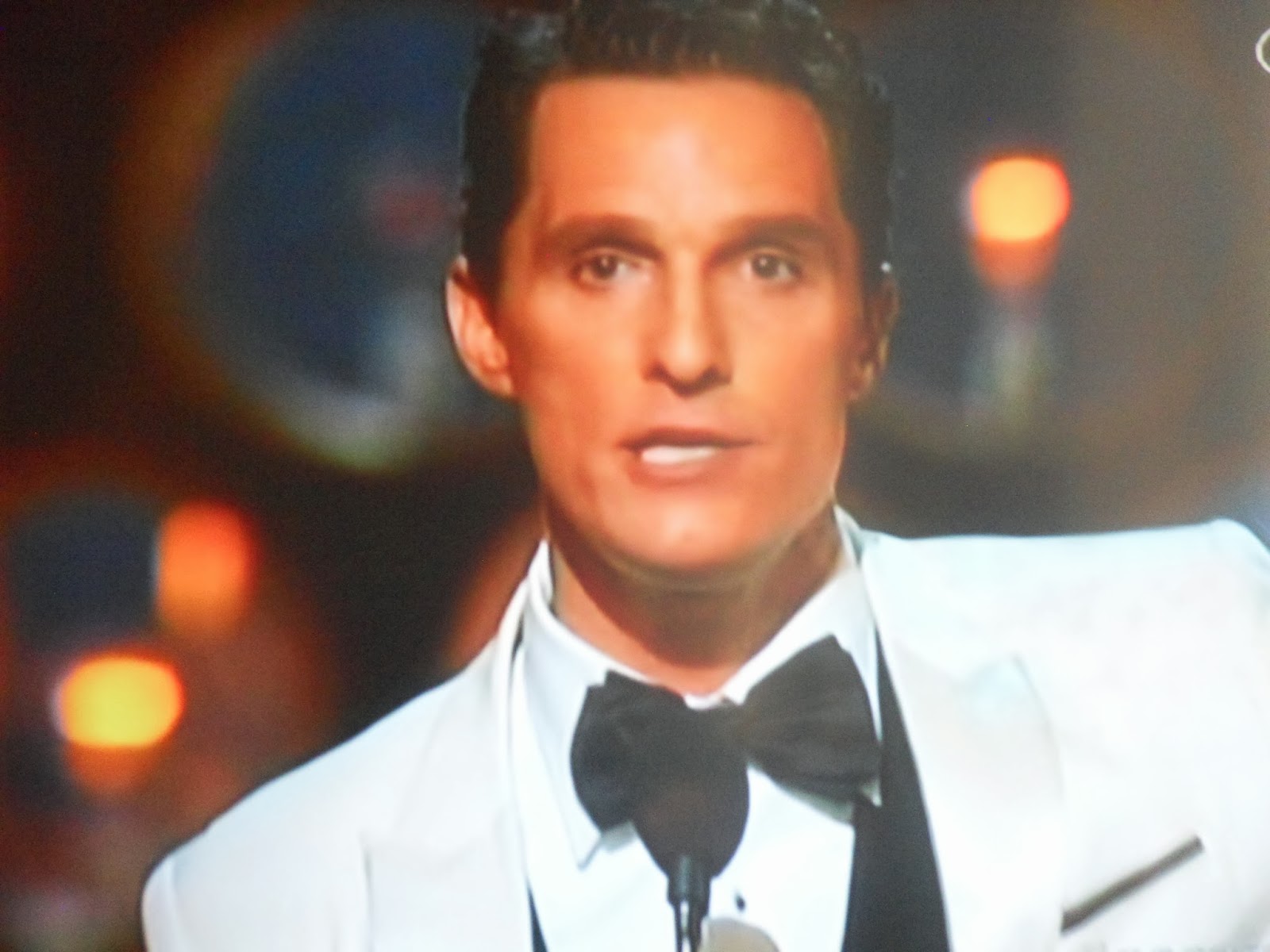 America's "other sweetheart" (according to Ellen) Jennifer Lawrence gives the Best Actor Oscar to Matthew Mc Conaughey! Never thought that would ever happen. But I got it correct, though I would have liked Leonardo di Caprio to win. McConaughey seemed ready for his win, having a great acceptance speech about someone to look up to (God), and someone to chase (him in 10 years), capping it with his signature "alright, alright, alright."

Will Smith presents Best Picture. The Oscar goes to "12 Years a Slave"! Now that was unexpected given the six other Oscars "Gravity" won today. I did not like "12 Years" very much.  I did not think it really added anything new to how slavery film had been done before.  This so unlike the cinematic frontiers that a film like "Gravity" crossed. This was a downer for me as the ceremony wound up. Totally shut out of awards were "American Hustle", "Nebraska" and "Captain Phillips", despite multiple nominations.