Recap of The Music of REY VALERA: Nourishing Nostalgia 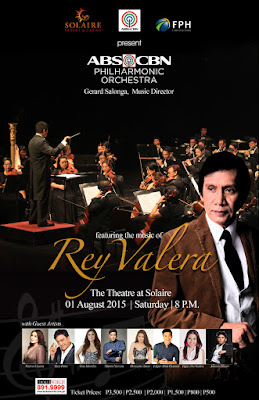 Rey Valera is really a big name in OPM when I was growing up. It really seems like all his songs from the late 70s all the way through the 80s and early 90s were big hits, either for himself or for other singers. Many of those songs became theme songs for major movies and telenovelas. There was a lot of excitement when this tribute concert was announced. And true to the buzz, the concert was actually sold out several days before concert day. 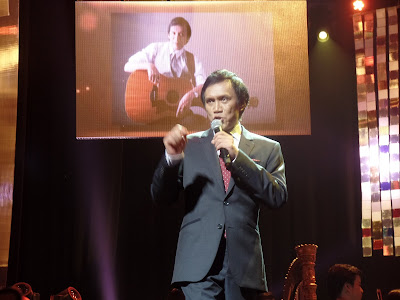 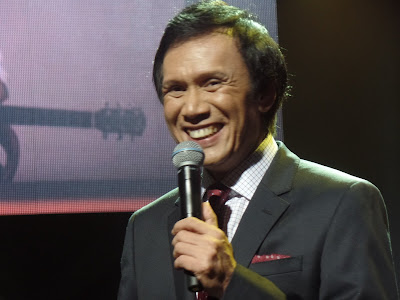 The man of the hour - Mr. Rey Valera

The concert proper began with an overture of Rey Valera tunes by the ABS-CBN Philharmonic Orchestra led by Maestro Gerard Salonga. Then most unexpectedly, they immediately introduced the man of the hour -- Mr. Rey Valera. He went on stage to sing "Kamusta Ka". The clear voice is still there, effortlessly reaching those deceptively easy, but really very high notes. After the song and a few words showing his incredible humility, Mr. Valera was escorted down the stage and brought to his special seat in the audience with his wife. 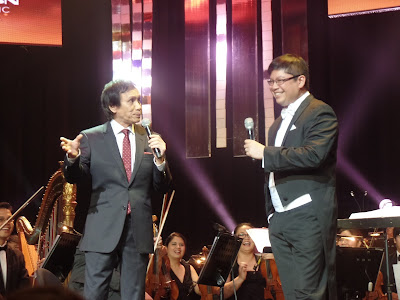 Mr. Valera, Maestro Gerard Salonga and some of the orchestra 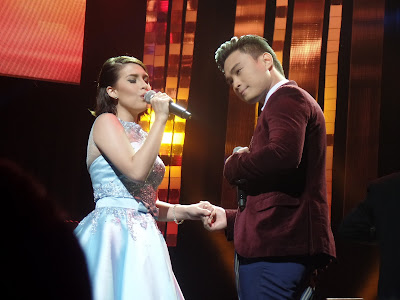 The first guest artist was Edgar Allan Guzman, who looked dapper in a burgundy suit with his suspenders hanging down. He sang two obscure (for me) English songs which I have heard only for the first time tonight: "Don't Let Your Woman Cry" and "Hello". He then made way for Tippy Dos Santos who sang an upbeat Filipino song I also did not know, called "Manghuhula". Their set was ended by both of them singing "Naaalala Ka" as a duet. Now finally, that's a song I can sing along to! 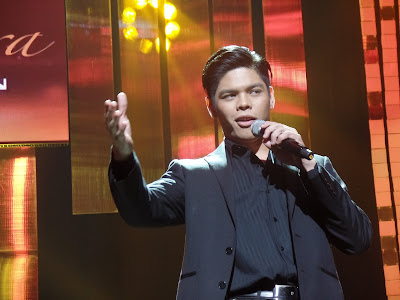 Maestro Salonga commented that Valera also had rare break-up songs in his discography. The orchestra then played a sublime instrumental version of "Kung Tayo'y Magkakalayo" with only a piano and two cellos playing. Amazing arrangement.

After that, a female dancer came out to dance a flamenco-style number. Surprisingly, tenor Antonio Ferrer came out to sing an operatic, Spanish-flavored version of Valera's novelty hit "Ayoko Na Sa Yo". That well-applauded, out-of-the-box rendition was a creative brainchild of Mr. Mickey Munoz, the managing director of the ABS-CBN Orchestra. 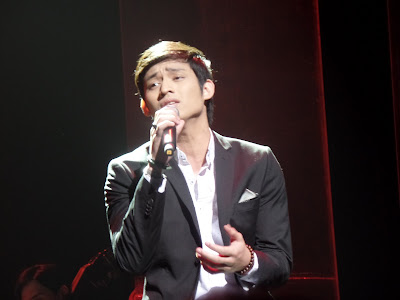 The next were two spot numbers from two young upcoming singers with very different singing styles. Michael Pangilinan sang a quiet version of "Walang Kapalit", accompanied only with an acoustic guitar. This was followed by a bravura version of a crowd favorite "Sinasamba Kita" by belter Morissette Amon. 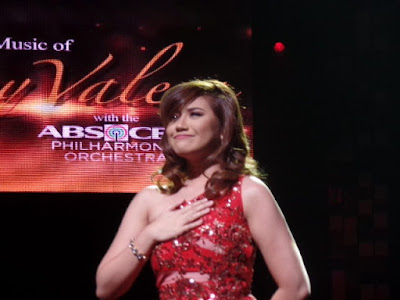 
The orchestra played an instrumental version of "Kahit Maputi Na Ang Buhok Ko." The next singer is Ms. Vina Morales, who came out decked in a glittering blue gown with a deeply plunging neck line. First, she sang "Malayo Pa Ang Umaga", a very beautiful song I forgot was from the Valera songbook. It was the theme song from the telenovela "Agua Bendita" which starred Morales. Her next song was the theme song from one of the most successful telenovelas of all time, revived again just recently "Pangako Sa Yo". Ms. Morales brought the house down with her impassioned delivery of that famous song. 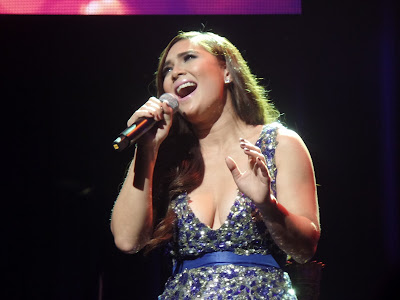 The next singer was the the inimitable Rico J. Puno. His appearance tonight was most unexpected because he just underwent a 7-hour heart surgery last April. But this did not deter the veteran singer from performer his heart out with songs Rey Valera wrote for him.

First number was "Ako Si Superman", a song which Puno rejected before, and became a hit by Valera himself instead. His second song was "Sa Daigdig ng Alaala," a challenging ballad which he still pulled off quite well, despite some obvious difficulty. Finally he sang "Sorry Pwede Ba?" sitting down on the edge of the stage. This prompted a couple of ladies seated in the front row to approach him to take photos. Ever the irreverent joker, Puno did not shirk from making naughty (and even macabre) potshots at tonight's honoree, but we know it was all in the name of good fun. 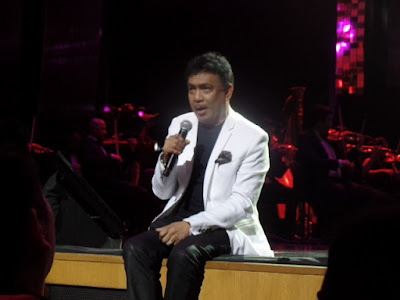 The next singer was someone I did not really associate with Rey Valera -- Martin Nievera. However, he sang his own excellent versions of two of Valera's most famous songs: "Kung Kailangan Mo Ako" and "Maging Sino Ka Man." 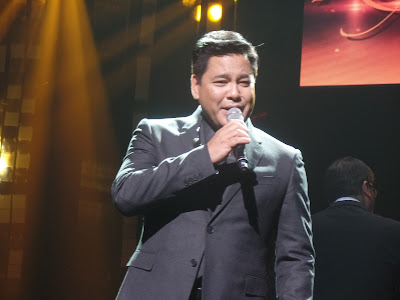 The final singer was Ms. Sharon Cuneta. She sang a lot of Rey Valera's songs as theme songs for many of her hit films. She even had a best-selling album containing her versions of Valera songs only. It was Rey Valera who gave Ms. Cuneta her massive breakout hit, "Mr. DJ". She sang a beautiful version of that iconic song as her first number of the night. She would also sing "Kahit Maputi na ang Buhok Ko" and "Tayong Dalawa" (a song she allegedly sang live for the first time).

It was so heartwarming to hear Sharon sing again. We could not help but sing along with her. Barring that bizarre moment when she called a female doctor up on stage to assure everyone that her healthy breasts were real, Sharon delighted us by effusively sharing a lot of personal stories about Rey Valera. These truly showed the value of their storied professional relationship and the depth of the personal friendship. 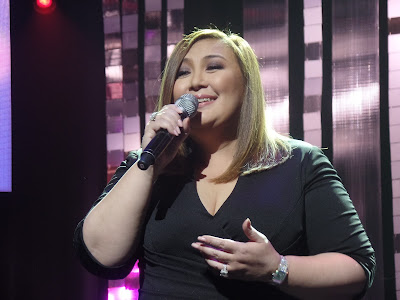 Rey Valera was then called back up onstage and all the singers joined him. Valera acknowledged Sharon's role in making him well-known by constantly thanking him every time she sang "Mr. DJ" on TV. There was a lot of fun banter between him and his closest friends there, Rico J and Sharon. Given a guitar to play, he started to sing "Kahit Maputi na ang Buhok Ko". Later the rest of the ensemble joined him in the singing.

The concert ended with a shower of golden confetti. Everyone in the audience I am sure left the theater well-nourished with a sense of fond heartwarming nostalgia, definitely with one of Rey Valera's timeless sentimental songs playing in their mind. 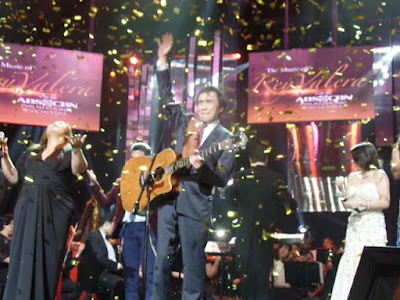