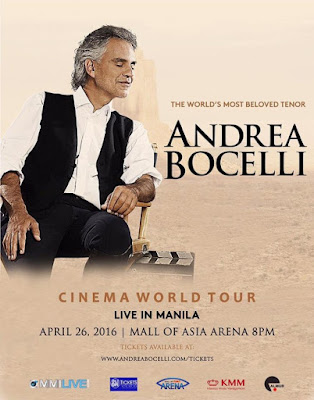 I can't believe that it had already been 12 years since we saw his elegant first concert in the Philippines held in the fully-packed Araneta Coliseum. Andrea Bocelli was at the height of his popularity back then. I am a big fan of his music, having bought cassettes of all his albums back in the 1990s. His beautiful "Sogno" album (1999) was one of my favorite albums of all time. His duet with Celine Dion "The Prayer" was of immense and enduring popularity even up to now.

This time around, I am not really familiar anymore with Bocelli's new material in the past five years. However when news came out that he was returning for a concert at the MOA Arena, I wanted to recapture the magic experience of being in that first concert. Since it was already our second time, I thought front row General Admission tickets were good enough for us.

When we arrived at the Arena last night however, we were surprised to see that the people who bought Gen Ad tickets were being upgraded to occupy the last three rows of the Upper Box! This was on a first come-first served basis, so luckily we went there early to get good seats near the center section. After a video about Bocelli's foundation for the disabled, the show began at around 9 pm. The Arena was not really full yet even when conductor Carlo Bernini led the ABS-CBN Philharmonic Orchestra through the opening overture. 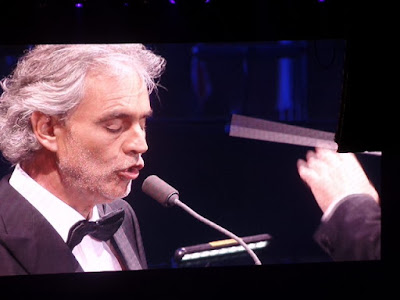 Bocelli looked much older now with much of his hair a dignified silver, but the full vocal quality and range that made him popular was still very much there. The set list of first half of the show was composed of Italian arias only. Frankly, I was only familiar with "La Dona e Mobile" (from "Rigoletto") which was the second song he sang and the most popular song in that whole set.  His guest artist in the first half was Mexican soprano Maria Katzarava whose voice was so powerful yet silky smooth as she reached those high notes. The Ateneo Chamber Singers provided the background vocals.

After the 20 minute break, the second half immediately opened with a very familiar tune -- "Maria" (from "West Side Story"). I was enlivened by this song because I felt this already signalled the main course of the show -- music from his latest album called "Cinema" featuring songs from motion picture soundtracks.

The next tune was "Brucia la Terra" featuring guest flutist Andrea Griminelli, which Bocelli sang while beautiful images from its source movie "The Godfather" were being shown on  the video wall behind him. Griminelli stayed on stage to play a flute instrumental solo on the Ennio Morricone tune "Gabriel's Oboe" from "The Mission." This tune may be more familiar to some as "Nella Fantasia" done originally by Sarah Brightman in 1998. 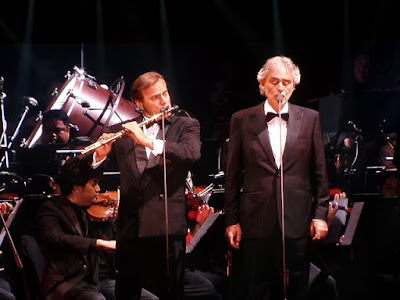 
Bocelli came back to sing a couple more songs from the album -- the very popular "The Music of the Night" (from "The Phantom of the Opera") and Mario Lanza's "Be My Love" (from "The Toast of New Orleans").

When Bocelli and Bernini left the stage for a break, Gerard Salonga came on to conduct the orchestra. Up and coming Filipina pop singer Christine Allado took the stage. She was a statuesque young lady who gave a memorable fiery performance, matching her fiery red gown. Her showstopping solo renditions of "As If We Never Said Goodbye" (from "Sunset Boulevard") and "Fly Away" (from "Moulin Rouge") were smashing highlights of the whole show. People who had not heard her sing before (like me) will definitely know her now. She practically stole the show right there and then. (Watch the VIDEO!)

Salonga and Allado left the stage as Bocelli and Bernini took their places and performed "Por una cabeza" (from "Scent of a Woman").  To the delight of audience, Allado came back out again to sing "Cheek to Cheek" (from "Top Hat") with Bocelli while scenes of Fred Astaire dancing were playing in the screen behind them. The maestro even showed his funa and frisky side in his interaction with Allado. Bocelli and Allado then went on to sing one of my favorite songs from the "Sogno" album -- "Canto della Terra." This song would have me on LSS all the way to my parking slot, and even up to now as I am typing this recap. 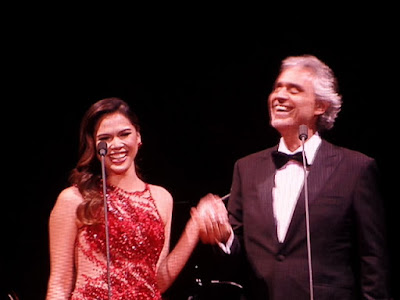 Bocelli then sang "Nelle tue mani (Now We Are Free)" (from "Gladiator") accompanied by an elegant video showing Bocelli (now 57 years old) riding a black stallion playing in the background. Ms. Katzarava came back on stage to sing with Bocelli their final song together "Con Te Partiro (Time to Say Goodbye)."  To satisfy the audience who was on their feet then clamoring for more, Bocelli returned to the microphone to sing "Nessun Dorma" ("Turandot") which was already the very last song of the concert.

It was a very moving concert. Bocelli's voice had that enchanting effect on his fans. There was always that last note which never seemed to lose strength even as it lingered for a long time -- that really gets me all the time, and still does. Of course, I was disappointed not to hear "Romanza," "Vivo Per Lei" or "Sogno", more of my old favorites. We did not hear "The Prayer", which I am sure everyone was waiting for but did not get. Nevertheless, we all went home filled with much joy and spiritual upliftment which the Bocelli voice inspires.