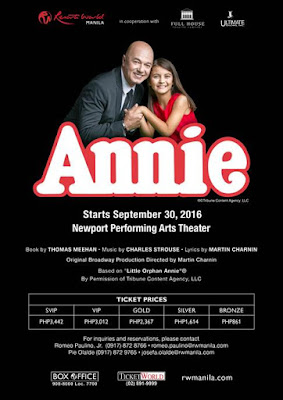 I had long known about the musical "Annie" because it was well-known that Ms. Lea Salonga broke through local mainstream show business by her precocious portrayal of the title role in the Repertory Philippines production back in 1980. I was not watching plays yet back then.

This current production by Full House at the Resorts World Manila Newport Performing Center is the first major local staging in thirty six years. So this is the first time that I am actually seeing the complete play as written by Thomas Meehan, with music by Charles Strouse and lyrics by Martin Charnin. I knew it had several faithful film adaptations, but I had not seen any version until the modernized remake in 2014 with Quevenzhane Wallis and Jamie Foxx, so I do not think that counts.

This show had been running September 30, 2016 and this week is already its last weekend. It just so happened that this week, we are also having the 60th Jubilee Annual Convention of our professional society (PSOHNS) at the Marriott Hotel and in place of having a Gala Dinner, we were informed that we are all going to watch a special performance of "Annie" instead -- an unprecedented treat for me during a convention.

The year was 1933 in New York City during the Great Depression. Annie was an optimistic 11-year old girl left by her parents in the New York Municipal Orphanage as an infant, under the irresponsible care of the ever-drunk Miss Hannigan. She constantly held on to the belief that they will come back for her, with a broken locket around her neck as their promise. That holiday season, Annie was chosen to spend two weeks with the billionaire Oliver Warbucks, two weeks that will profoundly change Annie's life.

I realized that, aside from the ubiquitous "Tomorrow" and "Hard-Knock Life", I did not really know most of other songs in the show. A few sounded familiar like "Maybe" and "You're Never Fully Dressed Without a Smile", but the others were new to me. The first act felt a bit long and slow. However with Act 2, the plot picked up and is sustained up to the end. I did not expect Act 2 to have that delightfully executed White House scene that I totally, totally loved. James Paolelli as President FDR was so sweet, as if Steve Martin played him.

As with other RWM productions I had seen in the past, sometimes the stage may seem too big for the small number of actors onstage. To make up for that, they create excellent sets and backdrops further enhanced by graphic projections to achieve a realistic 3-dimensional effect. We see the revolving stage in action on the very first scene. The first time we see the interior of the opulent Warbucks mansion, I can almost hear a collective gasp of awe from the audience. When the glittering giant Christmas tree was wheeled in, it was breathtaking. My personal favorite set was the one in the conference room at the White House. Outside the window, we even see the lawn with an American flag proudly waving.

Child actress Krystal Brimner is only 9 years old but she went beyond my expectations with her earnest and touching performance in the title role. I recognize her name as the girl who played John Lloyd Cruz's traumatized daughter in the acclaimed indie film "Honor Thy Father" (2015), which actually won her an award that year. As Annie, there was a danger of her optimism coming across too sassy and annoying, but the winsome Brimner hit the right balance and never crossed that line. Her singing voice was full and strong in its high pitch, especially in her iconic song "Tomorrow". (Isabeli Elizalde alternates as Annie.)

Michael de Mesa was smart and elegant as Daddy Warbucks. He was noted to be straining in some of his tough belting songs in Act 2. Nevertheless, his sincere warmth shone through his gruff exterior. That little waltz he did with Annie was heartwarming to witness. Menchu Lauchengco-Yulo was so funny and nasty in the thankless role of the comically hateful role Miss Hannigan. Her rendition of her featured song "Little Girls" was such a strong show-stopping star moment. Such depth!

Jill Pena was a classy and kind Grace Farrell, while Justine Pena was trashy and unscrupulous Lily St. Regis. But both Pena girls have such beautiful soaring sopranos that pierce the ensemble songs they're singing in. Mako Alonzo was so slimy playing the conniving brother of Miss Hannigan, Rooster. (Red Concepcion alternates as Rooster.) Again, I am going to say that I enjoyed the performances of the actors in the White House scene. Aside from Paolelli as FDR, also outstanding were James Perez and Chino Veguillas as his aides. 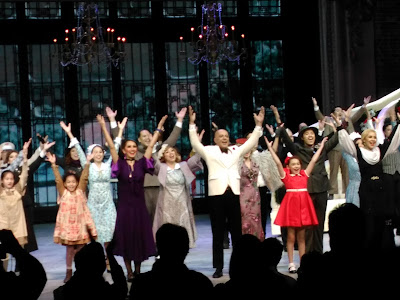 Congratulations to director Michael Williams for this difficult achievement of successfully directing children and dogs. (I never knew that Sandy only had two scenes!) Aside from the set design, the costume design by Gino Gonzales also contributed to taking us back to the 1930s New York. The lighting design of Jonjon Villareal was effective in creating drama in various scenes, The live orchestra under the baton of Maestro Rodel Colmenar was a joy to listen to as they accompanied the play. You will go out of the theater singing "Tomorrow" as the Christmas spirit of the play envelops you with cheer.

"Annie" has just won Best Musical Production (Foreign Material) from the 29th Aliw Awards announced last November 30, 2016, while the two girls who played Annie, Brimner and Elizalde, both got cited as Discovery of the Year.