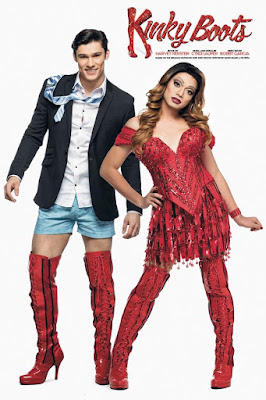 Drag queens and musical theater seem to be a natural fit. The colorful costumes, the elaborate song and dance numbers, the human drama behind the make up all make these shows fun and evocative. They just need a gimmick to make it stand out. "La Cage aux Folles" had a wedding. "Priscilla Queen of the Desert" had a bus. "The Producers" had Hitler! The title of this new show clearly tells us what its unlikely gimmick is -- SHOES!.

The plot of "Kinky Boots" the musical was based on a 2005 British film with the same title, that starred actors Joel Edgerton (as Charlie) and Chiwetel Ejiofor (as Lola). Producer Daryl Roth acquired the rights to turn the film into a musical. He got Harvey Fienstein (who also wrote other shows about drag queens like "La Cage" and "Torch Song Trilogy") to write the book, and 1980s pop star Cyndi Lauper to write the music and songs.

The show was a hit on Broadway in 2013. It earned 13 Tony nominations, and won 6 including Best Musical, Best Score for Cyndi Lauper (the first win ever for a solo woman), and Best Actor for Billy Porter (as Lola). Jerry Mitchell lost his bid for Best Director, but won for Best Choreography. The West End production in 2016 won 4 Olivier Awards, including Best New Musical, Best Actor in a Musical (Matt Henry as Lola) and Best Costume Design.

Price & Son has been making shoes in Northampton for four generations. Charlie Price was not interested, but he inherited the business anyway. But unfortunately by then the whole shoe industry was on a down trend. After meeting Lola, a flamboyant drag queen nightclub entertainer in London who needed stronger stiletto heels for her outrageous boots, Charlie came up with a bright idea of a unique niche market their company can focus on in order to save the family business. 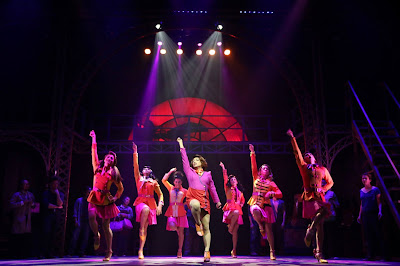 Nyoy Volante never fails in all the lead roles given to him by Atlantis in the past. He was amazing in "In the Heights" and absolutely fantastic in "Jersey Boys." Volante hits it out of the park again as the fabulous Lola. For every show-stopping production number like "Land of Lola" and "Sex is in the Heel," he also shows his mellow side in ballads like "Not My Father's Son" and "Hold Me in Your Heart." I felt Volante was a bit hoarse last night but he still gave it all his soul in this challenging role.

Fil-Kiwi singer-actor Laurence Mossman, who made his local stage debut playing multiple small roles in "Fun Home" also from Atlantis last year, makes the big jump this year to play the co-lead character Charlie Price. Lauper made Charlie some pretty tough belting songs to sing (like "Soul of a Man"), with high notes to sustain at the end.  Notes may not have been perfectly hit all the time, but Mossman definitely had the wide vocal range for the role. Mossman had the winning aww-shucks charm to make his Charlie work.

I first recognized Yanah Laurel as a solid singer as Sue Snell in "Carrie" back in 2013. Her vocal power was fully affirmed in her performance last year as Whatsername in "American Idiot." As Lauren here in "Kinky Boots," she had a most delightful role as the factory employee who was thrilled to be working closely with her handsome new boss Charlie. She was so disarming and cute in her one featured song "The History of Wrong Guys."

Tricia Canilao plays Charlie's self-centered fiancee Nicola. Too bad we only get to hear a hint of her strong "Ms. Saigon" singing pipes in the very end.  Nel Gomez plays Charlie's friend Harry, gets to sing a solo "Take What You Got." Jaime Wilson plays chauvinistic bearish factory worker Don, sang mainly in the chorus but he stunned us with a solid rock wail at the end.

Playing as Lola's troupe, the Angels are Ritz Beltan, Jorge Jahnke, Michael Jahnke, Jazztin Cacayan, Mark Pineda, and Gerhard Krysstopher. These "ladies" blew the audience away with daring fashion sense, and even more daring acrobatic dance moves all done on stiletto heels! They steal the scene whenever they are onstage. Splits, cartwheels, and moving conveyor belts do not faze them at all.

The choreography by Cecile Martinez is funky and athletic. The set design of the Price and Son factory by Faust Peneyra is huge and impressive. Lola and the Angels were outrageously dressed in wild finery designed by Raven Ong, while their wigs and makeup design are by Johann dela Fuente. Musical director Molinder Cadiz led the live band. Putting it all together is Bobby Garcia, whose name is already a brand of excellence in terms of quality of show production, and he certainly lives up to that reputation with "Kinky Boots." Everybody will definitely say Yeah!