Aside from "The Sound of Music," another movie that was constantly played and replayed in our house during my childhood was "Chitty Chitty Bang Bang" (1968) We also had the original soundtrack LP record which we also had on repeat on our turntable, so I knew all those classic songs by Richard M. Sherman and Robert B. Sherman by heart. I would find out later that the movie (directed by Ken Hughes and co-written by Roald Dahl) was not exactly critically acclaimed or that well-known by many, but nevertheless this movie had a nostalgic hold on me.

When I heard that Full House was going to mount the Jeremy Sams stage adaptation of  "Chitty Chitty Bang Bang" in Resorts World Manila, I was both excited and apprehensive because I knew the movie and songs inside and out and I cannot wait to see it come to life, but at the same time I had high expectations which may not be met. I knew that this was going to be a technological challenge how they were going to make Chitty float or fly.

Caractacus Potts was an eccentric British inventor, a widower with two sweet children, Jeremy and Jemima. The playful children wanted their father to buy the remains of a classic race car so Potts needed to raise 30 shillings whatever it took. When he did, he transformed the car into one with special abilities, as only Ian Fleming can endow it. The covetous Baron of Vulgaria (a country which outlawed children) ordered his minions to steal the fantastic car because he wanted it for his own.

While it was hard to get Dick Van Dyke out of Caractacus Potts, Gian Magdangal was able to give him a charming personality of his own. As he reminded us in 9Works/Globe Live production of "Disney's Newsies" earlier this year, Magdangal possesses a strong singing voice perfect for musical theater. Whether the song is whimsical (like "You Two") or sad (like "Hushabye Mountain"), Magdangal sang them so well. He can also deliver in the dance department, as he showed in the dynamic "Me Ol' Bamboo" number. (Lorenz Martinez understudies this role.)

With her short hairdo and masculine costume, Yanah Laurel looked nothing like the immaculately ultra-feminine Truly Scrumptious of Sally Anne Howes. While it took a while for me to get used to it, Laurel's beautiful voice in her self-titled song "Truly Scrumptious"  eventually won me over, and cemented later in "Lovely Lonely Man" and "Doll on a Music Box" . Her Truly was spunky and feisty, a thoroughly modern woman of that era. (Arya Herrera understudies this role.) 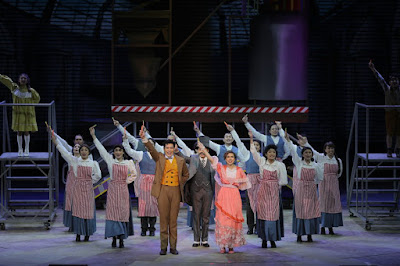 
Albert Silos and Isabeli Araneta Elizalde were an energetic and chirpy Jeremy and Jemima Potts. (Noel Comia Jr. and Zoey Alvarado alternate in these roles.) I just saw Silos as lead in PETA's children's show "Tagu-taguan" last August. This is the first time I had seen Elizalde in action, since I caught her alternate in "Annie." I was happy to see James Paoelli, a delightful FDR in "Annie," back in a longer, but similarly lovable role as Grandpa Potts. He even had his own solo song "Posh" and comedy number with the old rickety inventors in "Roses of Success." (Michael Williams understudies this role.)

The colorful characters of the Vulgarian Baron and Baroness were played by Raymund Concepcion and Menchu Lauchengco-Yulo with naughty pizzazz, especially in their featured song "Chu-Chi Face." Yulo had her own "Bombie Samba" dance routine which was a rather oddly-placed, off-tangent Brazilian-flavored number. (Juliene Mendoza and Christine Flores understudy these roles.) Mako Alonzo and Reb Atadero played bumbling spies Boris and Goran, who livened things up with their ad-libs and slapstick comedy sideshows as the show momentum would occasionally sag. (Chino Veguillas and Raul Montesa understudy these role.)

There was one seriously evil villain in the show and that was the scary Childcatcher as played by Lorenz Martinez. His make-up and costume looked like it was inspired by Danny DeVito's look as the Penguin in Tim Burton's "Batman Returns" (1992). This character gave me the creeps as a child as he was played in the old film by Robert Helpmann. Martinez's characterization was similarly sinister and dark. (Stephen Vinas understudies this role.) 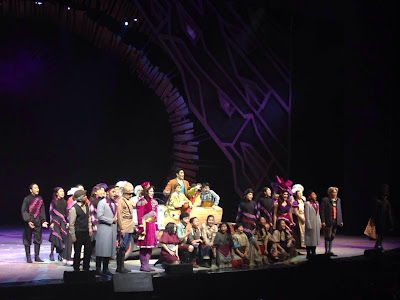 Chitty Chitty Bang Bang itself is the central prop of the show everyone is waiting for. It does not actually move, so the production makes things move around it to give the car a sense of motion. These "tricks" may or may not work, depending on from where you are looking at it. The much-awaited flying scene was a cleverly executed illusion against a dark starry sky to end the first half. The lighting was not too good from my viewpoint when the floater or the wings came out from the car's underchassis so the sense of wonder in those scenes was rather muted.

Mio Infante's sets were wonderful when they are expansive and used up the whole stage, like the Pott's residence with its imposing windmill, the Scrumptious Candy Factory, or the Fun Fair. That beautifully hypnotic White Cliffs of Dover backdrop which turned from idyllic to menacing was executed perfectly. Aside from Chitty, they also had to come up with convincing machines for making breakfast, sweets and cutting hair.

Director Jaime del Mundo came up with another cheerful and fun show, featuring some imaginative ways to circumvent the technical limitations. As usual, the amazing talent of Filipino artists both on stage and off stage (particularly musical director Maestro Rodel Colmenar, choreographer Nancy Crowe, costume designer Bonsai Cielo) carried and lifted this production creditably. As an old fan of the movie, I could not say I was completely satisfied with all the scenes, but hearing the songs again and singing along to them made me very happy.

The show is best seen in the center sections of the theater. The visual illusions on the stage do not work consistently when you are seated in the peripheral sections, and you will tend to look at the giant video screens placed on either side of the stage.