Review of BINONDO: A TSINOY MUSICAL: Celebrating the Chinese-Filipino Connection 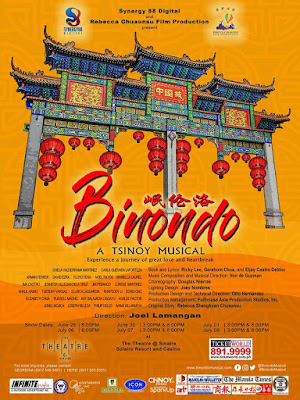 In 1986, a Chinese professor related to Ms. Rebecca Shangkuan Chuaunsu his personal love story. The poignant drama of his story stuck with her from that time on. More than 30 years afterwards, Ms. Chuaunsu boldly took on the reins of creative producer, to spark the creation of an original Filipino musical to share that same haunting story with the everyone. This year, her major labor of love finally reached its fruition as "Binondo: A Tsinoy Musical" makes its world premiere on the stage of The Theater at Solaire last weekend.

The year was 1972, on the occasion of the Moon Festival. A Chinese scholar named Ah Tiong, then on a 2-week vacation, dropped into the Lotus Club in Manila. There, he was mesmerized with the beauty of Lily, the featured singer on stage that night. When Lily fumbles on the lyrics of a Chinese song, Ah Tiong gamely went on stage to sing it with her. From that moment was born a resolute love that would face insurmountable adversity. 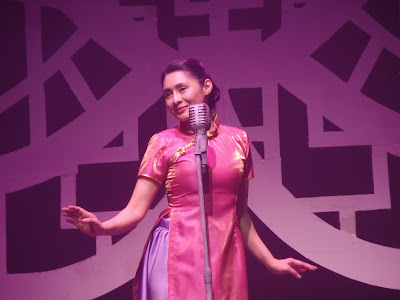 "The Moon Represents My Heart"
with Carla Guevara-Laforteza (as Lily)

The role of Lily was played by two of the most-sought after leading ladies in the local theater scene -- Shiela Valderrama-Martinez and Carla Guevara-Laforteza. I had been able to see both of them become Lily in separate shows, and I saw that they imbued the character with distinct personalities. Shiela's Lily was sweeter and demure. Carla's Lily was more spirited and feisty. In either case, it was not difficult to see why both Ah Tiong fell head over heels in love with her. As excellent singers, both ladies had no trouble navigating the challenging songs Lily had to sing, like "Dito sa Binondo" and "Paghihintay." 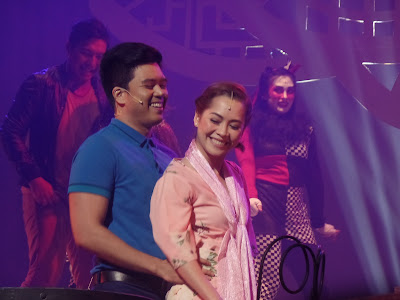 Ah Tiong was played by David Ezra. This award-winning singer-actor had his stage debut only in 2015, but is now a most in-demand leading man in several shows since then. The role of Ah Tiong was given a lot of difficult songs with soaring notes to sing, like "Kung Sino Nga Bang Una ay Siya Ring Huli". In the upbeat number, "Ang Pag-ibig ay Disco", he had to show off his dancing skills while singing, always a big challange to pull off for any performer. Ezra's voice never faltered, always strong and passionate, in his solos, his duets (with Lily, Jasmine or Carlos), and with whole company.

(Ezra's alternate in this role is Arman Ferrer, whose career had grown together with Ezra since they had been sharing the stage or alternating in shows like "La Estrella", "Mabining Mandirigma" and coming soon later this year, "Side Show." There is no doubt that Ferrer can likewise pull off the challenge of playing Ah Tiong.) 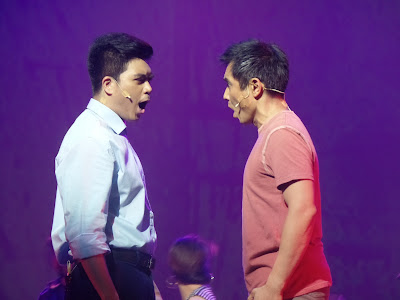 The character Carlos is a Manila-born Chinese-Filipino who had been Lily's friend since childhood. He was played by Noel Rayos, a stage veteran with nearly 100 shows under his belt playing a whole gamut of diverse roles. As Carlos, he gets to show off his comic timing, as well as his dramatic chops. The role of Carlos also gets to sing some punishing songs only the best singers can deliver with confidence, like "Dayuhan sa Puso" and "Ako Ay Pilipino". I consider the latter song as one of the most significant songs in the whole show as it declared that Chinese-Filipinos are indeed true Filipinos, whose loyalty lay with the Philippines, not China -- a sentiment that rings true up to the present time.

(Rayos' alternate in this role is Floyd Tena. I had only seen in him on stage twice before, in "Maynila Sa Kuko ng Liwanag" and "Himala" in smaller roles. Too bad I missed his biggest role to date as Carlos which would really push his vocal and acting skills to the max.) 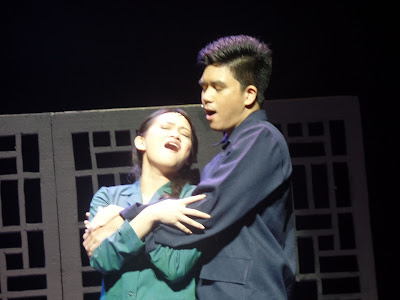 "Minamahal, Iniibig"
with Mariella Laurel and David Ezra (as Jasmine and Ah Tiong)

Jasmine is Ah Tiong's childhood friend back in Beijing and the girl he had long been betrothed to marry by their parents. She was played by Mariella Laurel. This is the first time I had seen her onstage before and I thought she stood her ground solidly within all the brimming singing talent on that stage. Her best song for me was "May Tiwala Ako" -- a long-distance duet between her in Beijing and Lily in Manila as they profess their trust in the man they both love, Ah Tiong.

Mrs. dela Rosa, Lily's mother, was played and sung so powerfully by Ima Castro. Every time she dug into her deepest soul as she sang songs like "Tila Kandila", we are all drawn into her inner pain borne out of sincere concern for her daughter's well being. Lourdes, Lily's cousin and confidante, was ably played and sung by Jennifer Villegas-de la Cruz. 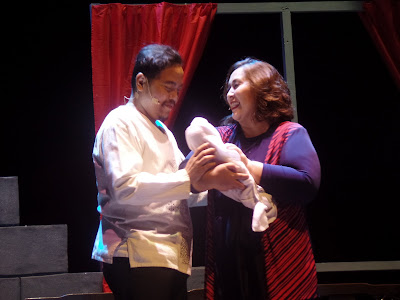 Dondi Ong and Kay Balajadia-Linggayu (as Mr. and Mrs. Chua)

Mr. and Mrs. Chua, Carlos' parents, were played by noted operatic tenor Dondi Ong and soprano Kay Balajadia-Linggayu (with Carla Guevara-Laforteza alternating). It was a shame that we only get to hear them sing very short verses in the song "Hindi na Magbabago" which they sing with their son Carlos. Russell Magno and Elizabeth Chua played Mr. and Mrs. Zhang, Ah-Tiong's parents. They get to act and sing in heavier dramatic scenes of persecution in the numbers "Ang Bagong Tsina" and "Kalimutan na ang Lumang Pag-ibig". 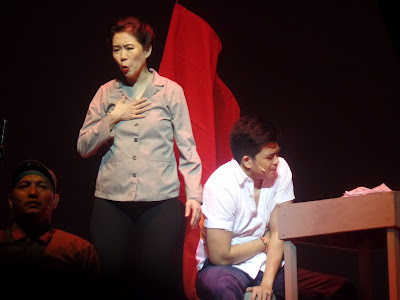 The key character of 14 year-old schoolgirl Ruby was played very sweetly by Ashlee Factor. Even if she only comes out in a few scenes in Act 2, she got to deliver heartwarming lines and sing one of my favorite songs in the entire show, entitled "Patawad". Her voice possessed a childlike quality which made her perfect for her small yet important role. 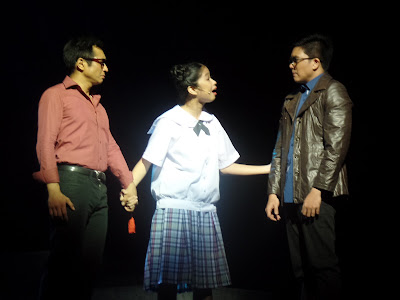 "Patawad"
with Rayos, Ashlee Factor (as Ruby), and Ezra

This play employed the device of a Greek chorus to narrate the goings-on between scenes. They were set apart from the rest of the ensemble by their more ornate costumes and make-up. They also served as conscience to various characters -- needling them, goading them, teasing them. They also got to play a number of other minor characters, either Filipino or Chinese, in the lives of our protagonists. The actors in the Chorus were Jim Pebanco, Lorenz Martinez, Khalil Kaimo, Ellrica Laguardia, Rhapsody Li and the irrepressible Tuesday Vargas with her scene-stealing antics. 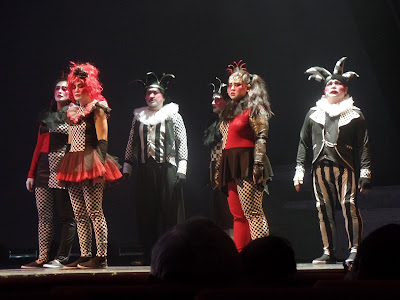 The script is in Filipino, written by acclaimed veteran Ricky Lee, along with two younger co-writers Gershom Chua and Eljay Castro Deldoc. It eloquently wove the Fil-Chi love story tightly in the face of historical events in both Manila (Martial Law) and Beijing (Cultural Revolution). The length of the play can intimidating at three hours plus long (with a 15-minute interval in between), but thankfully Director Joel Lamangan made the flow of the scenes easy to follow, so the play was quite engaging and highly entertaining. I do think that the script can still be tweaked (especially in certain clichéd melodramatic scenes) so future stagings can be more streamlined.

Last year, I was introduced to the music of Von de Guzman when I watched "Maynila sa Mga Kuko ng Liwanag." His songs here in "Binondo" follow generally the same grand flowing style of musical composition. His songs were easy on the ears with their lilting melodies and smooth steady progressions which can reach stratospheric heights as they climaxed. Because of its high difficulty level, it takes a special singer to be able sing and give justice to a Von de Guzman song. Meanwhile, the vibrant choreography by Douglas Nierras certainly gave the huge production numbers involving the whole ensemble (imagine 50+ people dancing in unison) infectious verve and energy. 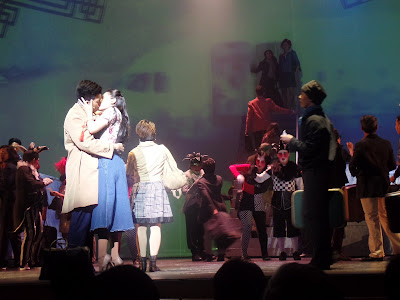 The big stage of the Theater at Solaire is a challenge for any production designer to fill. Otto Hernandez came up with very impressively huge set pieces which had to be easily moved in and out of stage as the scenes called for them. The concluding scene of Act 1 was a very imaginatively conceived and exectued stage illusion which involved passengers climbing up stairs to board an airplane.The opening scene of Act 2 with an enormous portrait of Chairman Mao overlooking a troop of soldiers waving red flags also had a very haunting effect as the scene depicted unjust violence. The lighting design of Joey Nombres enhanced the grandeur of the sets, as well as emotions of the scenes being depicted. 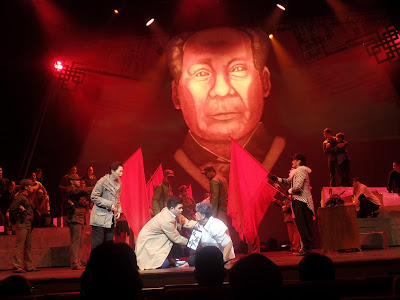 For several years, Ms. Rebecca Chuaunsu had the audacious vision of creating a bridge which would foster the positive values and heritage between the Philippines and China. With "Binondo," her most cherished dream had been realized in a most spectacular fashion, and I extend my hearty congratulations to her! 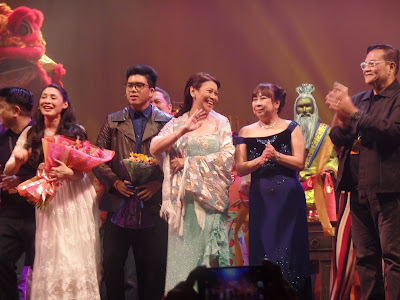 Ms. Rebecca Chuaunsu (third from left)
joins her cast and crew at the curtain call

As a final note, I commend the Mandarin language coach for making the Filipino actors sound realistic in the delivery of their Chinese lines and the singing of a famous Chinese song like "The Moon Represents My Heart". However, I look forward to the day when actual Chinoy actor-singers can also get to play the roles of Ah Tiong and Carlos. While the portrayals of Ezra and Rayos of their characters in the present production are effective, I sincerely feel that it would make a significant positive difference in the overall impact of the story when the casting could somehow be more authentic.