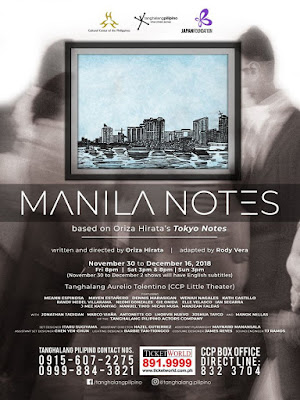 It was the year 2034. There was a major war raging in Europe. The artwork of Dutch artist Johannes Vermeer were being exhibited in a museum in Manila.  The play is set in the waiting area in the lobby of that museum. We listen in on the random conversations of various guests and staff gathered in the waiting area talking about their lives -- nothing special really, just regular lives.

The central characters would be the five siblings of the Tenorio family.Evelyn, the second sibling, a spinster taking care of their parents in the province, is in Manila, so they planned a get-together in the museum that afternoon. There was Alberto, their eldest brother, and his wife Jeannie: Ramoncito, the middle son, and his shy wife Tessie; Myra, the funny younger sister; and Roberto, their youngest.

Meanwhile, various other people were going in and out of the waiting area, Joy Goquingco was a young woman who was donating the paintings bequeathed to her by her father, was with her boyfriend Manuel Araos, who was planning to join the peacekeepers in Europe. We also meet the two curators of the museum, the stylish Emily Gorospe (who was entertaining Atty. Ross Miranda) and the gregarious Jerome Henares (the expert on Dutch art).

There were two college students doing research, Sonia Toralba and Aliyah Go. There were couples on dates: Bart de la Torre and his fiancee Nicole Magpayo; pilot Eric Bernardo and his girlfriend Helen Davide; and Joaquin Soler with his girlfriend Pamela Quizon. There would be some unexpected connections between some of these people which we discover when they see each other while resting on the benches.

This play was a literal slice of lives of these various characters that one afternoon, caught inside a metaphorical "camera obscura" (hence the Vermeer reference). There was no particular plot to follow at all. It was like listening in to one major flight of consciousness session with unrelated topics ranging from mundane personal problems to  issues of a bigger scale and interest, like art and war.

You will feel like you were just sitting on those benches yourself and was just practically eavesdropping, like it or not, on the conversations of these strangers around you. There may be two or more conversations going on at a time, just like it would in real life. We catch snippets of what they were saying about themselves and other people you do not know anything about, yet we can somehow complete their story on our own, and probably make our judgments about them (deserved or not).

As in our daily dealings within  crowds of people, there are characters who are naturally magnetic, while some just blend into the background. There are characters whose stories interest you, while there are those whose stories you don't really care about. Many times it was not even their words that catch your attention, but even just mere fleeting facial expressions, be it of joy, of longing, of annoyance, or of disgust.

The cast worked as a fluid ensemble, very zen. No one really grandstands, except maybe occasionally Gie Onida, whose character Jerome had a tendency to be flamboyant. Meann Espinosa (as Evelyn) and Mayen Estanero (as Tessie) drew us in with their kindness and sincerity. Kathlyn Castillo (as Myra) stood out because of her corny jokes. Elle Velasco (as Emily) and Manuel Tinio (as Eric) have winsome personalities that attract attention effortlessly. Randy Villarama (as Joaquin) had an air of sinister about him that set off all sorts of red flags. Micah Muna (as Sonia) scared me as she flirted with danger.

Completing the cast were: Dennis Marasigan (as Alberto), Wenah Nagales (as Jeannie), Jonathan Tadioan (as Ramoncito), Joshua Tayco (as Roberto), Antonette Go (as Joy), Manjean Faldas (as Manuel), Marco Viana (as Ross), Neomi Gonzales (as Pamela), Ian Segarra (as Bart), J-mee Katanyag (as Nicole), Lhorvie Nuevo (as Helen) and Manok Nellas (as Aliyah). Their characters may have been less flashy, but the actors all made them real people, unique with their personal quirks. 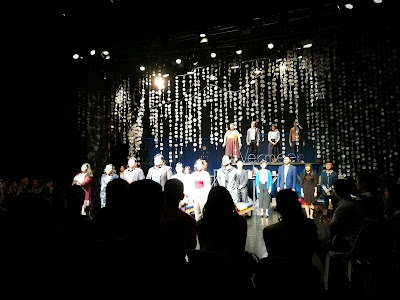 "Manila Notes" is the Filipino adaptation of "Tokyo Notes" (1994) by playwright - director Oriza Hirata, who also served as director for this TP production. The Filipino translation used for this staging was written by Rody Vera. The museum lobby waiting room set was designed by a Japanese, Itaru Sugiyama. It was enhanced by the lighting design of Barbara Tan-Tiongco. Costume designer James Reyes and sound engineer TJ Ramos round out list of the main technical crew.

There had already been adaptations in various cities, like "Seoul Notes," "Taipei Notes" and "Bangkok Notes," and there are plans to stage a "Tokyo Notes International Version" with an international cast and a more varied variety of juicy (or maybe not) conversations we can overhear on purpose. Set for the 2019 Theater Olympics in Japan, this is promises to be a most fascinating theater event to look forward to.

"Manila Notes" runs from November 30 to December 16, 2018 at the Little Theater of the Cultural Center of the Philippines. Showtimes: Fridays, 8pm, Saturdays, 3pm and 8pm and Sundays, 3pm. Tickets sold at P1000 and P800. Show runs for 1 hour and 40 minutes with no intermission.