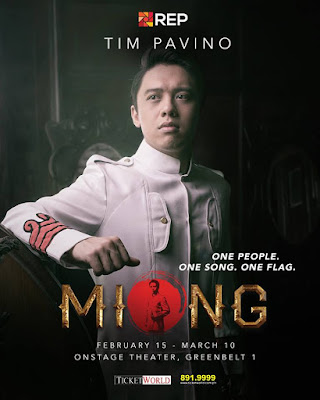 In 1998, during their 56th season, in a major departure from their usual offerings of Broadway and West End plays and musicals, Repertory Philippines staged an original musical in English entitled "Miong" about the life of President Emilio Aguinaldo, with book and lyrics by Joy Virata and music by Ian Monsod. The late Zeneida Amador directed the show, with Rem Zamora and Robert Sena alternating to play the title role. It was received with general acclaim.

However, the public's present appreciation of Emilio Aguinaldo is not the same as it was in 1998. If you had watched the recent high-profile local historical films "Heneral Luna" and "Goyo," you now have a certain impression about President Emilio Aguinaldo in your head already, and most probably it won't be a good one. This bad impression will be even worse when you've seen other movies and plays about contemporary revolutionary heroes Bonifacio or Mabini, where Aguinaldo is invariably the main antagonist of the story.

After all these negative stories about Aguinaldo, it should be interesting to hear the history of the Philippine Revolution told from his point of view. He is after all the first President of the Philippine Republic, known to be the first Constitutional Republic in Asia. (Playwright Ms. Virata based her script and lyrics on basically four books, namely: "The Young Aguinaldo" by Carlos Quirino, "Saga" and "Triumph and Roots of the Filipino Nation" both by Onofre Corpus, and "Emilio Aguinaldo" by Alfredo B. Saulo, as well as pamphlets and articles written by various historians.)

This year, 20 years later, on its 82nd season, and Aguinaldo's 150th birth anniversary, Rep brings "Miong" back on stage again, this time with Tim Pavino in the title role. Director Joy Virata revealed that for this restaging, she had streamlined the previous 3-hour long running time to a more compact 1 hour and 50 minutes, as well as trimmed the cast from 50 to 30. Ian Monsod's musical score is largely intact, with fresh interpretations by new musical director Ejay Yatco. 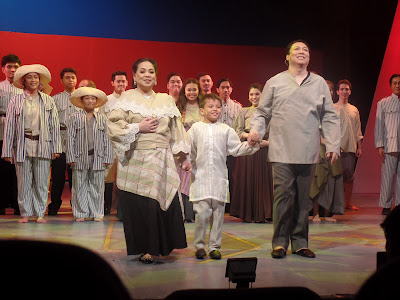 The musical followed Miong's life from his birth in 1869 ("Under the Bells") to the declaration of Philippine independence in Kawit in 1898 ("How Beautiful is Our Flag"). We will see scenes depicting his father's death at age 8 ("An Educated Gentleman"), his education in Manila from age 12 ("Someone Else's Dream"), his initiation into public service at age 17 ("Cabeza de Barangay"), his induction into the Katipunan at age 26 ("One Step at a Time"), and his marriage to Hilaria "Yayang" del Rosario at age 27 ("Rigodon de Amor").

The story then went into the more contentious chapters of revolution history following the rift between the Magdalo (pro-Aguinaldo) and Magdiwang (pro-Bonifacio) groups of the Katipunan. ("Magdiwang-Magdalo," "Where is the Battle") Miong was shown trying repeatedly to unite these two groups but was unsuccessful.

Aguinaldo was shown fighting in Pasong Santol, so he was absent at the Tejeros Convention where Bonifacio was shamed. (This disputed episode in history was told by way of gossiping womenfolk.) Bonfacio's death was shown to be against Aguinaldo's orders ("They Say," "Who Said"). Aguinaldo sang a song of tribute to Bonifacio's role in the revolution ("This Man"). 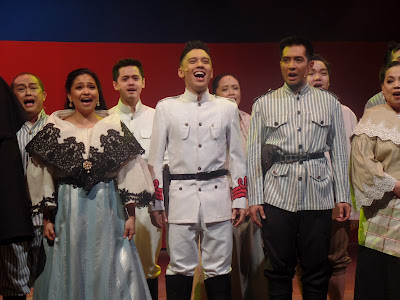 Tim Pavino provides Miong with a soaring tenor which got challenged for range with his every song, all of which he hit perfectly every time. Pavino looked very young and boyish with his physique. So while he fit the bill to a T in the introductory parts of Act I, he seemed not convincing enough as a victorious soldier and leader during the battle scenes of Act II. His mild manner and kind face made his Miong a sympathetic figure who just got caught up in the intensely cruel web of political intrigues of his time.

Cara Barredo was a beautiful vivacious Yayang. Her Disney-esque singing voice fit perfectly with Pavino's tenor in their sweet romantic duets like " Is He Looking at Me?" sung when they first met, and "Suddenly Love" sung on their wedding night. She also had an upbeat song of support for her husband's revolutionary activities "Side by Side." (In 1998, Cara's older sister Maya played Yayang, alternating with Liesl Batucan.)

Lani Ligot gave Aguinaldo's mother Kapitana Teneng a very strong character with her stern face and demeanor. Her rich full-bodied soprano was highlighted in her solo spot number "Never Enough," which tells of her concern for her son joining the fight for freedom. This portrayal gives a different impression of her compared to how slyly manipulative she was portrayed in "Heneral Luna" or in Nick Joaquin's "El Camino Royal." (In 1998, Joy Glorioso played the Kapitana.)

Elver Esquivel played Miong's father Don Carlos, the same role he originated in 1998. The cute Sean Kevin Inocencio played the Young Miong at age 8, and he also gets to wow us with his crystal clear singing voice. Noel Rayos (who played Bonifacio in 1998) played Miong's cousin Berong, who also served as our narrator. While he sang in a lot of songs, his strongest song was "Ninety Days" about the successful campaign of Cavite against the Spaniards with "bolo, knife and sword". (JM Rodriguez played Berong in the 1998 show.)

The towering Meynard Penalosa gave his Spanish friar Father Blas a most imposing presence, especially in his sinister song "Divide et Impera." In the latter parts, Penalosa would also play a comical Uncle Sam character. Kuya Manzano was again cast as a slimy Spanish oppressor here, as he was in "Guadalupe." Arion Sanchez painted a different, potentially controversial, picture of the Supremo, Andres Bonifacio. 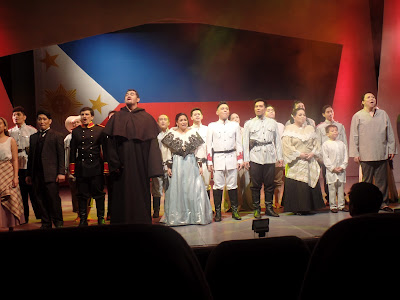 The Whole Ensemble at the Curtain Call

Dennis Marasigan designed a simple set, basically enclosing the empty stage with a white geometric frame, with the scenes were happening within that area, with movable stages and set pieces to establish the setting, enhanced by video projections at the back wall. Bonsai Cielo designed some elegant Filipiniana ensembles for the Aguinaldos and the illustrados. Dexter M. Santos and Stephen Vinas (choreography), John Batalla (lights), Winter David (video), Adul Lassin (scenic art) and Arvy Dimaculangan (sound) complete the production and artistic team under director Joy Virata.

We realize now, more than ever, that history is based on who was writing it, and who the target audience it was written for. We are aware that playwright Joy Virata is the wife of former Prime Minister Cesar Enrique Aguinaldo Virata, who is a grandnephew of Miong himself. Given that there may have been familial loyalty in this version, and that it was written in English, there was no doubting the patriotic fervor in Ms. Virata's book and lyrics. This was particularly true in her flag-waving finale, which emphasized how Aguinaldo chose to "declare this land as our own."

Beside bloodier or grittier musicals sung in Filipino (like "Supremo Redux" by the Philippine Stagers) which had such strong impact with its powerful arguments against Aguinaldo, "Miong" came across as more refined, less provocative and conciliatory in approach. Polished and genteel as it may be, "Miong" reminds us that Emilio Aguinaldo's role in our history should not be dismissed. He always had the unity and independence of our country in mind, and he proudly declared it on the historic date of June 12, 1898 in Kawit, Cavite for the whole world to see and for our country to celebrate to this day.