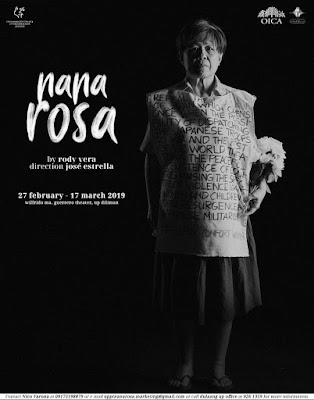 Maria Rosa Henson became a household name back in the 1990s when she came forward to the press about her tortured experience as a comfort woman during the Japanese occupation of our country. She was the first Filipina brave enough to break her silence over woeful episode of her life, nine gruelling months of forced sex slavery. Now more than 25 years after her nationwide confession, the UP Playwrights Theatre brings back her story back to fore on stage (as written by Rody Vera and directed by Jose Estrella), before it gets swallowed up by time.

Act I took us back to World War II when 14-year old Rosa was abducted by Japanese soldiers and corralled with five other young women in an old hospital to serve as "comfort women" -- a deceptive euphemism for a sex slave. Rape had always been a most difficult, most heinous crime to see on TV or in films, but performed live on stage, the effect was even more painful to witness. These lascivious rape scenes were graphically executed, a tad protracted maybe, but all done to make sure we also go through Rosa's pure hell. 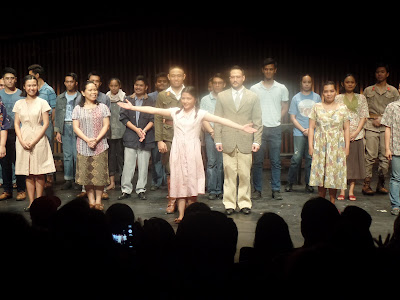 Act II brought us forward to 1995 when Rosa, now a 67-year old grandmother, agreed to make her story public. Instead of united outrage and sympathy, Rosa's action stirred up divisive controversy. Why did it take her almost fifty years before she came out with her story? Was she telling the truth or was she just after the money? Was it worth it for the Philippine government to take up the cudgels on Rosa's behalf, especially when it could throw a wrench in the good relations between the two countries at present?

Young Rosa was played by Ingrid Villamarin. Seeing Villamarin, she of delicate beauty and frame, sustain the brunt of the brutal and beastial lust of innumerable Japanese soldiers can definitely cause the audience to be collectively revolted and incensed. Despite the dehumanizing atrocities committed against her, Rosa never lost her resolve and her defiance against her abusers. Villamarin had the fire in her eyes for that. (Krystle Valentino alternates in this role.) 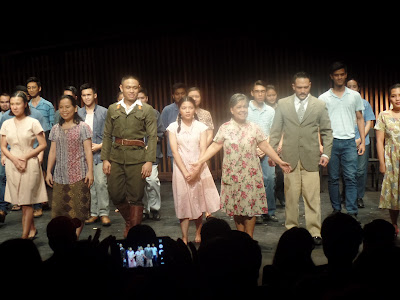 Nana Rosa was played by Peewee O'Hara. Her Rosa was surprisingly calm and level-headed. There was no big dramatic emotional breakdown moment for her. Her anguish was more internal, and O'Hara's acting was restrained to match that approach. Nana Rosa was a character who faced several difficult decisions in her life, and she always made her own mind up by herself. O'Hara had the strength of character for that. (Upeng Galang Fernandez alternates in this role.

Lei Quinquilleria (as Indai Sajor), Sarina Sasaki (as Lidy Nacpil), Bea Racoma (as former beauty queen Nelia Sancho) and Karlo Erfe (as Jimi Castillano) played the four activists who spurred the search for comfort women when no one even believed that they existed. Their delivery of lines can somehow sound too earnest and occasionally even tactless, but you know their heart is in the right place. Jeremy Cabansag, Camille Abaya, double duty actress Iris Monstesclaros, assistant director Issa Manalo Lopez and lead dramaturg Ina Azarcon-Bolivar all figure in one surprise heart-rending scene which was the main dramatic highlight of Act 2. 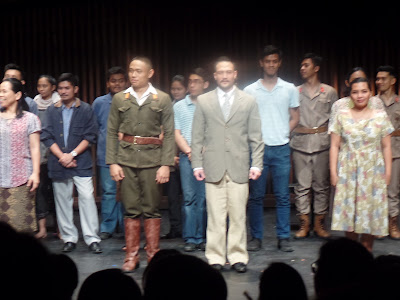 The technical aspects of the play, especially the sound by Jon Lazam and Marie Angelica Dayao, successfully set us in the proper mood. The sets of Charles Yee had those movable screens that give a voyeuristic vibe and worked very well with the lights by Barbie Tan-Tiongco and the dramatic graphics and videos of Joyce Garcia. The costumes of the 1940s Pampanga folk and of the Japanese military (with those remarkable brown high boots for the officers) were designed by Carlo Pagunaling. 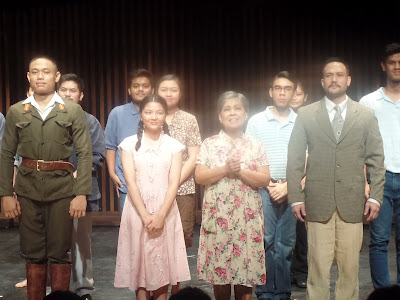 Rivera, Villamarin, O'Hara and Sy during the curtain call.

The run of this play comes right at the heels of a resurgent feminist movement, with the viral #metoo, presidential misogyny, International Women's Day, and similar female-centered advocacies being hot topics of the day. As of now, despite the 25 years that passed after Nana Rosa's public disclosure, there had still been no formal acknowledgement nor apology. It is high time to revive interest in the case of the comfort women still alive today. Justice still deserves to be accorded to them while they are still living, even if Nana Rosa herself is already not. However, in a time when even a statue made in their honor was ordered to be removed, will they ever get their elusive, long-overdue retribution?

NANA ROSA opened last February 27, 2019 and will run up to March 17, 2019. There are 7 pm shows on Wednesdays, Thursdays and Fridays, while there will be a 3 pm matinee aside from a 7 pm show on the final Sunday. No more Saturday shows next week. Venue of the play is at the Wilfrido Ma. Guerrero Theater in the second floor of Palma Hall in UP Diliman. Tickets are at P500 each.