This final week is the only week I was able to catch of the Philippine Stagers Foundation yearly Theater Festival. This festival had been held every summer since 2009 as the culminating activity of their month-long free theater workshop. Like previous years, the Stagers are expected to take daring risks and push boundaries in their experimental plays.

The first play this afternoon was JP Lopez's "I Didith Show" (PSF Theater Festival first prize 2014) as performed by the all-student cast. The second play performed was Chin Ortega's  "Ang Babaeng Naka-itum" (PSF Theater Festival first prize 2018) still featuring star turns by Cindy Liper and Arian Golondrina. I appreciated the story of "Babae" so much better this second time around.

There were three plays in competition played this day. All three plays were directed by Atty. Vincent Tanada himself, as always. In their tradition to be become all-around theater artists, Stagers also took charge of backstage matters even if they were also performing on stage -- namely, stage manager Johnrey Rivas and production manager OJ Bacor. The lights were handled by John Paul Santos, while the sounds were mixed by Ean Flores. The set designs were by Atty. Vince Tanada and Johnrey Rivas. 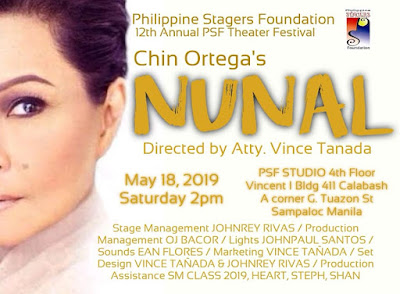 The first play in competition staged this day was Chin Ortega's NUNAL. This play told about a make-believe situation when Superstar Ms. Nora Aunor had passed away because of a self-inflicted accident. During her public wake, loyal Nora fanatics Flor (an OFW from Singapore) and Elsa (short for Eliseo, Flor's trans eldest brother) meet after being estranged for several years. Aside from their tense reunion, they were also vying for a chance to win a gold necklace bearing an important relic from the superstar -- her mole. 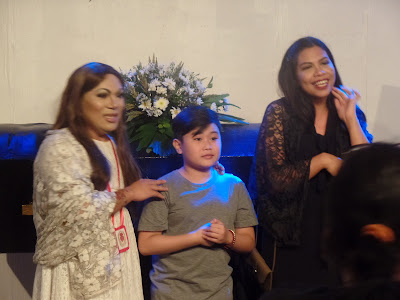 This was certainly a hilarious play especially for the fans of Nora Aunor, as this is a play about their religious-level veneration of their screen idol. Attentive viewers can surely identify all the references to La Aunor's extensive filmography, as her film titles, character names, hit songs and memorable lines were mentioned within the deliciously witty lines of dialogue. Significant people in Nora's family and career were also woven in, with arch-rival Vilma Santos getting very special citations. 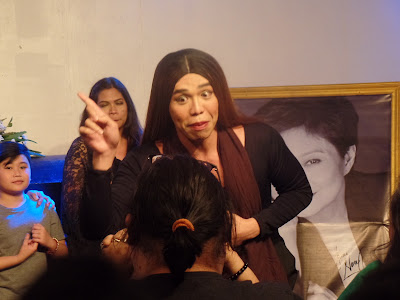 Magallanes in one of his wacky characters in this play

Actors Glory Ann Nacional (as Flor, as in "Flor Contemplacion") and Art Gabrentina (as Elsa, as in the visionary in "Himala") went to town with their over-the-top interpretations of Nora's signature line delivery, complete with stifled crying and emotional eyes acting. Gerald Magallanes also went all out with his multiple characters, from a TV reporter to a vivacious lawyer, but mainly an over-eager housegirl named Nelia (from her character in "Atsay"). Child actor Dean Rafols completes the cast as the Flor's son Ian (of course from the name of Kristoffer Ian de Leon, Nora's real life son.) 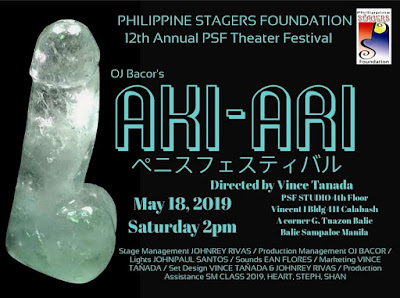 The second play in competition was OJ Bacor's AKI-ARI. The story was about the intertwined sexual relationships among three neighbors, namely Aki (an unselfish transgender), Haruki (with a prostate fetish) and Zenki (a brazen exhibitionist), as narrated by Aki's male member. The plot may have been a simple love triangle among three men, but the way the story was told went way beyond the ordinary. 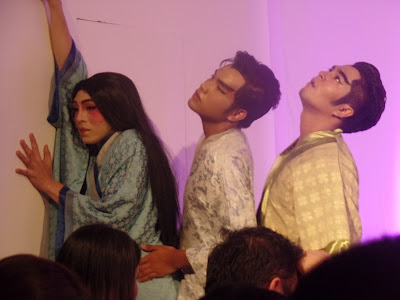 This play was given a Japanese Noh drama treatment, elevating the stage artistry of the sensitive, potentially scandalous, subject matter.  The narrative was mainly fueled by the philosophical musings of Aki's member detailing how his master went along with his sexual affairs. The proverbial envelope for stage decency was pushed to the ultimate limits here, as it already straddled the borderline between high art and pornography, but never exceeding. 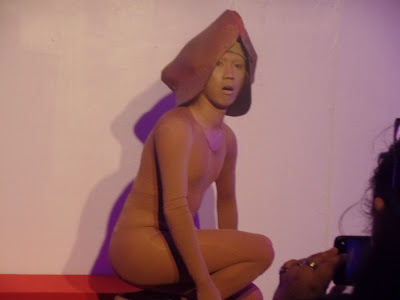 Being bold in subject and treatment, the audience was enraptured into silence during the play. The three actors who played Aki (OJ Bacor), Haruki (Gian Daquioag) and Zenki (Peter Galut) were all very courageous to literally bare their vulnerabilities, trusting only translucent white curtains and skillful lighting design to protect their modesty. In the middle of the stage the whole time was this figure in brown wearing an oversized helmet on his head (Brent Martinez). This phallic character could have been silly or comic, yet the writing and direction saved it from being so. 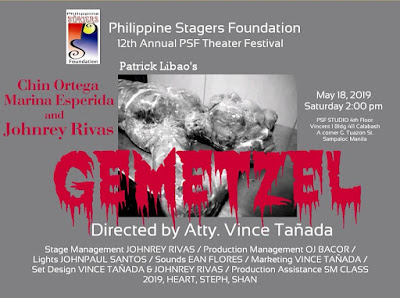 The third play in competition was Patrick Libao's GEMETZEL. I had to look up what this title meant, and it turned out to be a German word for " butchery, massacre, bloodbath, carnage, slaughter." In his introduction, Libao called his piece shock theater, and warned that it was going to be ugly and gory. The people seated in the front row were even given a long piece of black cloth to protect their clothing from fluids that may gush out at them during the course of the play. 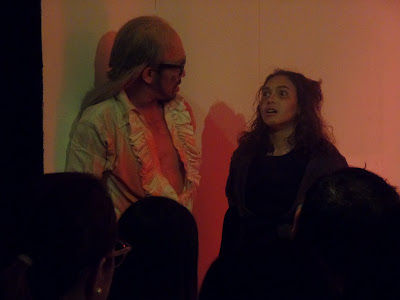 The Butcher (Ortega) and Agatha (Esperida)

It was after World War II in a remote village in Germany. The former inn called Otel Muller was now better known as an abattoir. It was being managed by an elderly Jewish butcher and his ward, a girl named Agatha, who served as his maidservant. One day, Otek, a young gentleman from Berlin, came in to check into the inn. Meanwhile, Agatha saw him as a chance to escape her wretched existence. 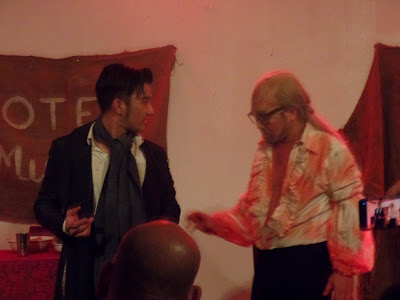 Otek (Rivas) and the Butcher (Ortega)

The pacing of this play started out very slow as it described the melancholy and hunger that enveloped that time period, with the bitter butcher (Chin Ortega) and his miserable maid (Marina Esperida) on the brink of insanity because of their intense suffering under the Nazi Third Reich. However, the action picked up when the dashing guest (Johnrey Rivas) arrived at their doorstep. The breathtaking climax was a grisly, gut-wrenching, action-packed Grand Guignol affair which had the whole audience screaming with excitement.