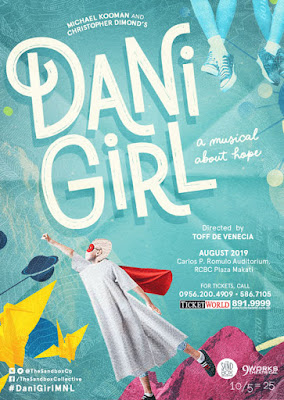 Cancer is a devastating disease to have. At any age, when you hear this diagnosis from your doctor, your world just crumbles down around you.  When a child gets cancer, the sense of tragedy is doubled. This little one had just begun his life and now he has to fight so hard and endure a lot of pain just to keep alive. As parents of a child with cancer, you'd want to do anything just to make your baby recover, even if it meant trading places with him.

Americans Michael Kooman and Christopher Dimond wrote a music, book and lyrics of this musical about a child Dani Lyons who had a relapse of her leukemia after a remission of three years. Much to the chagrin of her harried mother Katherine, Dani used her fertile imagination a lot to keep her spirits up during her hospitalization for chemotherapy. At first, she only had her stuffed toys and guardian angel Raph to play games with. Later, she would have a boy roommate, a fellow cancer patient named Marty to play even more games with.

The play is a very vivid peek into the inner workings of a child cancer patient's mind -- asking all the troubling questions that are bothering her. Foremost of these questions was "Why is Cancer?" -- a question no one seemed to have the answer for. This was the impossible question that triggered Dani to go on her odyssey to reach Heaven in order for God Himself to give her pressing answers she sought.

The performance of 21 year-old Rebecca Coates as 9 year-old Dani was fascinating to watch. She really seemed like a child, scared, lost and confused over what was happening to her. Her singing was pure and crystalline in songs like "Invocation," "My Hair" and "Requiem for a Bear" (my personal favorite song of the show). Coates already played this role five years ago when Sandbox first staged this show to much acclaim (which I missed). This time, she still owned this challenging role, shifting from frenetically energetic one scene to sickly weak the next.

Luigi Quesada played Marty, the boy who shared Dani's adventures of discovery. His best song was "Why I Loved the Movies" which talked about his obsession about his movie heroes Indiana Jones and Clark Kent, and how they don't live in fear. His chemistry with Coates was best seen in "Going to Heaven," a spectacular number with all its fun Star Wars references, complete with a light saber battle.

Their alternates as Dani and Marty are actual child singer-actors Felicity Kyle Napuli (debuted 2016 Rep's "A Little Princess", played lead 2017 in Atlantis' "Matilda", then went international 2018 in "The Lion King") and Daniel Drilon (debuted 2014 as lead in Rep's "Pinocchio"). Their shows promise a totally different, probably more heartbreaking viewing experience given the proximity of their ages to the characters they play. 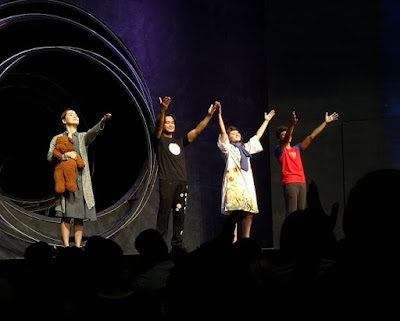 
Lorenz Martinez played multiple characters like Raph the guardian angel, Cancer the bad guy, Dani's father, God, and a slew of others, challenging him to give each character a distinct personality. Others worked, others did not. These overlapping roles are not always easy to figure out which, may be confusing for viewers, especially the younger ones. (Julienne Mendoza alternates in this role, and given his known versatility, it should be interesting to see how he attacks the various roles.)

Shiela Valderrama-Martinez plays Katherine, Dani's steadfast but loving mother. Martinez is celebrating her 25th anniversary this year, and she has several shows lined up this second half of 2019 ("Binondo," "Dani Girl," "Passion" and "Adarna"). Her vocal highlight here was a ballad that conveyed a mother's pain -- "The Sun Still Rose." (Pam Imperial alternates in this role.)

Director Toff de Venecia led his talented technical crew to bring this play to life. The story may have just been set inside a hospital room, but the set (by Faust Peneyra) and video projections (Joee Mejias) brought us to other areas of action, from the inner organs of a teddy bear, to outer space, and all the way to heaven. Peneyra's backdrop with the central black hole given three-dimensional depth by concentric lights was a triumph of innovative stage design.

Lighting director Miggy Panganiban's highlight was that final scene of Dani seemingly floating in a dark abyss with twinkling lights -- beautiful.  It was too bad that I could not see a clear beam of colored light emanating from the ends of the light sabers during that fight scene between the kids and Cancer. This detracted somewhat from what could have been an exciting, visually arresting scene, especially with the nifty sci-fi sound effects by Glendfford Malimban.

Stephen Vinas did the choreography. Myrene Santos designed the hair and makeup. Ejay Yatco is the musical director, leading a spare ensemble of three musicians on keyboard, cello and percussions.

This show talked some seriously mature subject matter, disguised in the form of children "games". Dani would play several morbid games, like pretending her stuffed animals were dying of various forms of cancer as she sung their requiems. Later, she would even let her beloved teddy bear Mr. Fritz "die" of ovarian cancer so that she can follow his soul to heaven. Precocious as Dani was, can a 9-year old kid really think about death this way?

The songs were talking about very macabre, hidden in sweet lilting tunes. The main antagonist Cancer were singing songs with titles like "God is Dead" and "Comaland." This Cancer guy was the same actor playing Raph the guardian angel, which was disorienting even for me. The most disturbing part for me was the eerie song "Side by Suicide" sung by the two kids in a sort of mutual death pact. This song was preceded by a scene of the kids buying the "strong stuff" from a Mexican drug pusher.  Can young audiences understand this the right way?

Because of these dark unsettling aspects, I cannot say I truly "enjoyed" the play. This musical was marketed for children, but I felt the topics discussed seemed way beyond their maturity. While I grant that children with cancer may be forced to mature faster than normal children, I still feel this material may be tough even for them.

This play is not fun and games. This is as much as show about mental health as it was about cancer. It billed itself as "a musical about hope," but this hope was not easily seen in the show. This definitely requires a heart-to-heart family debriefing session after the show for the kids to process what they just watched -- especially if that kid has cancer himself.