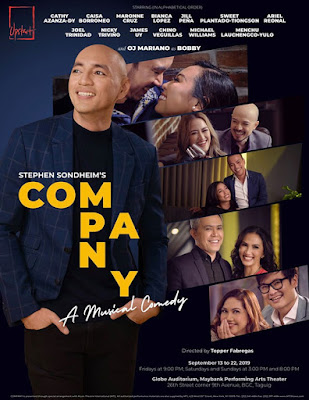 There are three Stephen Sondheim musicals in the local theater scene now. There is his 1994 musical "Passion" presented by the Philippine Opera Company, and coming up in October is his 1979 dark masterpiece "Sweeney Todd" to be presented by Atlantis. In contrast to those two period pieces, this show "Company" staged by Upstart is Sondheim's 1970 musical about the social mores of New Yorkers contemporary to that time.

Bobby is celebrating his 35th birthday. His friends, all couples either married or living in, throw a party for him. From that framing device, the show would go into vignettes of Bobby visiting each of these couples (Harry and Sarah, Peter and Susan, David and Jenny, Paul and Amy and Joanne and Larry) and getting insights from them about marriage. We will also meet the three ladies with whom Bobby had romantic affairs.

OJ Mariano held his ground as the central character of the show Bobby, a man in his mid-thirties who still grappled with commitment issues as all his friends were all already married or engaged. His male friends all envied his freedom, as he looked for that perfect girl who had the best qualities of his female friends, Mariano was able to project that smooth bachelor vibe and spirit. Bobby's final anthem "Being Alive" is one of my favorite songs of all time, and the main reason why I went to watch this show. Seeing it sung by Mariano in its proper context made the hefty ticket price worth it. 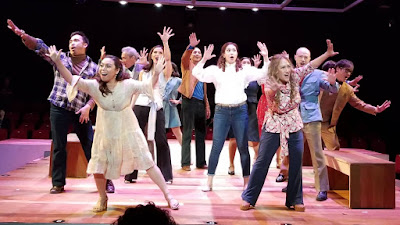 Joel Trinidad and Sweet Plantado-Tiongson played Harry and Sarah, who could not discipline themselves from their addictions. Ariel Reonal and Nicki Trivino played Peter and Susan, who seemed to have it all but with surprising plans. Chino Veguillas and Bianca Lopez played David and Jenny, seemingly mismatched but fit perfectly. James Uy and Cathy Azanza-Uy played Paul and Amy, long engaged but still with wedding jitters. Menchu Lauchengco-Yulo and Michael Williams played Joanne and Larry, all jaded with their wealth and age. Of Bobby's three girlfriends, Maronne Cruz played the kittenish April, Jill Pena played the reserved Kathy and Caisa Borromeo played the bohemian Marta.

There were three particularly memorable performances from this all-star ensemble. Menchu Lauchengco-Yulo got to sing that acerbic and judgmental song "Ladies Who Lunch" and infused it with explosive drunken angst. Cathy Azanza-Dy was cheerful and bubbly even as she plowed through the tongue-twisting monster of a song "(Not) Getting Married Today" which also featured the soaring soprano of Bianca Lopez (of the Phil. Madrigal Singers). Maronne Cruz also stood out as the dim-witted stewardess April as her slinky and sexy voice and moves to seduce Bobby surely made temperatures rise in that auditorium. 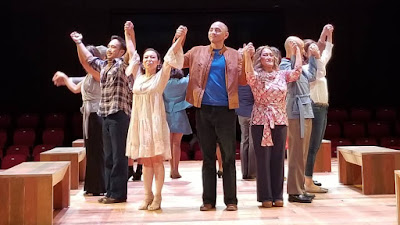 The cast at the curtain call
(photo credit: Phil Fernando)

Director Topper Fabregas decided to strip everything down to basics, so the audience can just focus on the actors and the material. The presentation area of the Maybank Performing Arts Theater was rearranged so that there is a central elevated stage (designed by Joey Mendoza) and the audience are seated all around it. This meant there were actors who may have their backs to you in certain scenes, not always easy to follow. There were no furniture on the stage except benches which the actors pushed around to fit the scene. Musical director Rony Fortich led the musicians to play the score live, which is always a good thing, especially for a Sondheim musical.

Based on my personal experience here, I think where you are seated will affect how well you hear the words. The Tony award-winning witty dialogue (by George Furth) and song lyrics (by Sondheim) are the prime meat of this show, so it felt bad that I could not grasp all of them properly from where I was seated in seat 1 of row D in the balcony. (I just walked in to buy a ticket just before the show began and I guess that was the best they could give me in that section at that time.) I can see the show pretty well which was fine, but unfortunately I cannot hear everything that well the whole time.