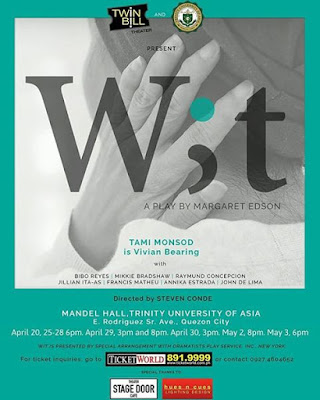 I thought it was an astute decision of Twin Bill Theater to stage this particular play in the Mandel Hall on the second floor of their Main Library building in the Trinity University of Asia campus. The flagship course of TUA is Nursing, and this 1999 Pulitzer Prize-winning play by Margaret Edson could not have been staged in a more appropriate venue.

Having no family nor friends, she did not have any visitors at the hospital except for the callow Dr. Jason Posner, the fellow who coldly treated Vivian as simply a subject of his research. Fortunately, her nurse Susie Monahan still showed Vivian the compassion she so longed for. This made Vivian realize her own faults as she faced mortality. 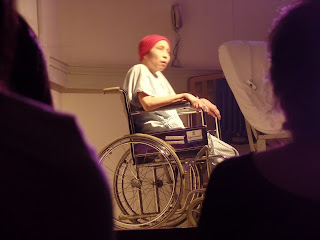 As a medical professional myself, I was totally riveted to the subject matter of the play --cancer. In my field, I encounter cancer patients frequently, and the years that pass do not make it any easier to deal with them as individuals. It is always difficult to break the news of their dire diagnosis to them.  I always take my time when I speak with a cancer patient on their initial consult, every follow up thereafter, sometimes up to their death bed. I have to find the balance between explaining the gravity of the condition but at the same time still be encouraging and positive. I hope I never come across the way Jason did to Vivian.

This play gives me a view from the cancer patient's side -- what the patient thinks as we attend on him, as we discussed his case during Grand Rounds. While I always strive to establish rapport with my patients, but it can't be helped to keep a certain distance for the sake of professional objectivity. In clinical practice, most patients simply do not open up as much as Vivian does in this play, so her frank and incisive commentary about her illness, her doctors and her therapy are important to me as a cancer surgeon.

Secondarily, as a lover of the English language, I enjoyed this play's wit as Vivian related her present state with her opinions about English vocabulary, poetry, syntax and grammar. That scene where college-age Vivian and her mentor Prof. Ashford argued about the difference of punctuation marks in a famous John Donne poem and that scene where the five-year old Vivian discovered the word "soporific" from reading a Beatrix Potter book with her father were both fascinatingly executed. 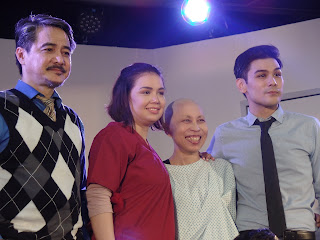 Bald and gaunt, Tami Monsod played Vivian Bearing very realistically -- so realistically that it was disturbing and astounding at the same time. Her complex lines all delivered perfectly -- at first with the prideful confident elocution of a university English professor who lived and breathed John Donne, progressively fading into the weak halting phrasing of a dying terminal patient. She literally deteriorated in front of our eyes, it was chilling. She was so committed to her role, it was as if she was not acting. I witnessed method-acting live right there on that stage, and it is unforgettable.

With his facial hair and deep voice, Raymund Concepcion projected authority in the three characters he played: as Vivian's attending Dr. Kelekian, as Vivian's logophile father, and as Vivian's only friend Prof. Ashford (a role originally played by a female). Bibo Reyes, all bright-eyed and preppy, effectively played the callous Jason to be a model of how a doctor should NOT act or speak in front of a patient. Mikkie Bradshaw, with her sweet face and voice, played Nurse Susie, Vivian's sole ray of sunshine in her confinement.

I extend my sincere congratulations to the director Steve Conde and his whole Twin Bill Theater crew for choosing yet another well-written, topically significant play to produce. Like "Suicide Incorporated" and "My Name is Asher Lev" before it, this new play "W;t" is again so ideally cast and so inventively staged with the minimum of props. Bravo! 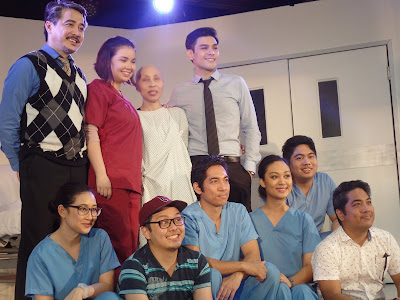 I wholeheartedly recommend this play as required viewing for medical students, residents and especially Oncology fellows and even consultants.  Watching how insensitively the doctors were portrayed in this play is very eye-opening. Doctors should honestly reflect upon themselves if the behavior they see onstage mirrored their own. All the medical knowledge and skill we possess cannot make up for atrocious bedside manner. Kindness is a key virtue for doctors, as it is for everyone.

Trinity University is very accessible to public transport as several jeepneys pass through E. Rodriguez Ave. The venue proper is Mandel Hall, about 100m walk from the gate. Bring an ID to show the guard as per university rules.