Review of PETA's A GAME OF TROLLS: Awakening from Apathy 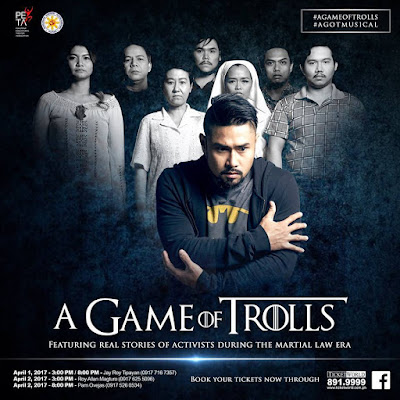 Because of the resurgence of a certain family back into the political limelight, there had been a slew of plays about Martial Law and its atrocities that had been staged by various local theater groups in an effort to educate millennials about that turbulent time in recent Philippine history. These theater artists have been showing vigilant passion for stemming the unsettling tide of historical revisionism that seems to be steadily being foisted on the new online generation.

The PhilStagers led by Atty. Vince Tanada first had a daring musical called "Katips" (MY REVIEW). In response to a certain controversial burial, a festival of nine one-act plays about Martial Law called "Never Again" (MY REVIEW). Even Ballet Philippines had a unexpected go at it in "Awitin Mo, Isasayaw Ko" (MY REVIEW). Sugid restaged "Buwan at Baril sa E♭ Major" (MY REVIEW) just earlier this year. PETA, presently on its 50th year of cutting-edge Filipino theater, certainly did not pass on the chance to make its own statement.

Hector is an internet troll whose job was to heckle netizens who were posting against Martial Law. It turns out that he had abandonment issues against his mother Tere who was a deeply-involved activist during the Martial Law days. One night, he gets vivid nightmarish visits from several Martial Law victims. Their stories of torture and injustice shakes Hector up from his political and personal apathy.

Myke Salomon, who has long proven his mettle in both acting and singing, proficiently takes on the lead role of Hector. He does look more mature than the other guys in the troll center and those in his apartment, making him stand out. I was really drawn to the character of Nanay Tere, played by senior PETA artist Upeng Galang Fernandez. It was difficult not to be moved by her simple yet absorbing performance, especially in that moving confessional monologue about her painful past.

As the main antagonist, Vince Lim was really annoying and slimy as Bimbam, the chief troll and Apo loyalist employer of Hector. His wife in real life, Gold Villar plays Cons, friend-zoned flatmate of Hector and front man of her band the Bugambilyas. This girl can really sing so well, I wished her solo song number lasted longer than it did during the show. Kiki Baento, Jose Lemuel Silvestre, Jason Barcial, Daniel Cabrera and Justin Castillo play the other millennial characters in the ensemble. 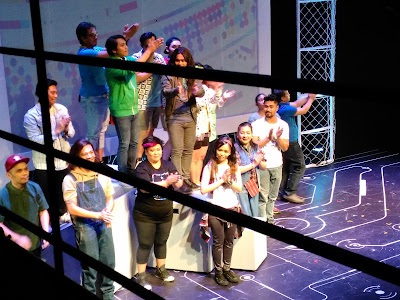 The cast takes their curtain call
"A Game of Trolls" is created by the same two ladies behind the PETA megahit "Rak of Aegis" -- writer Liza Magtoto and director Maribel Legarda. Instead of being a jukebox musical, this new show brought to fore its serious socio-political issues with original songs written by Vincent de Jesus. As before, they told their story with just the right balance between drama and humor, with a bit of romance to spice things up for audiences, especially for the younger ones.

Using the "A Christmas Carol" device of visiting ghosts was an ingenious way to incorporate the disturbing stories of Bobby de la Paz, Eman Lacaba, Edgar Jopson, Macli-ing Dulag, Sr. Mariani and other unnamed Martial Law victims. That "game show" device for depicting forms of torture employed by the authorities back then was innovative, and the resulting presentation was no less horrifying, as they should. Also a key feature of this play is the interplay of video (by Ellen Ramos and Joee Mejias) with the live action.

That this show is presented in cooperation with the National Historical Commission of the Philippines says a lot about its authenticity as a drama about actual events in history. Meant to tour in colleges and universities around the country, "A Game of Trolls" works not only as a tool of historical instruction, but more so as an impetus for discussion and enlightenment. 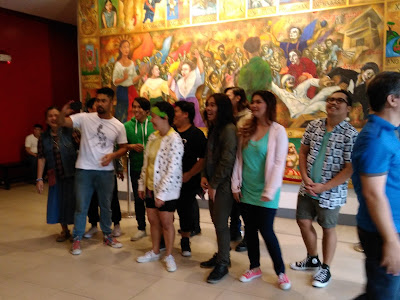 The cast members meet their fans in the lobby after the show.

"A Game of Trolls" is currently on a limited sneak preview run of four shows this weekend of April 1 and 2, 2017, with two shows on each day at 3 pm and 8 pm. Its main run will be during the whole month of September 2017. Venue is at the PETA-Phinma Theater in Quezon City.

This show is available for mobile performances around the country from May to August and October to December 2017. Interested schools can call Yesh Burce at 0977-8425525.