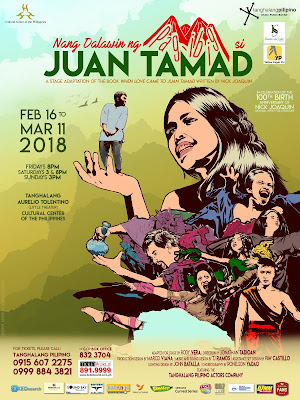 Before this play began, the audience was addressed by Ms. Cecille Joaquin Yasay, a niece of National Artist for Literature Nick Joaquin. She welcomed the audience to this play which was adapted from one of her uncle's children's stories entitled "How Love Came to Juan Tamad" from his "Pop Stories for Groovy Kids" series (1979). I only knew Nick Joaquin for his serious works, like "Portrait of the Artist as Filipino," "May Day Eve" and "The Woman with Two Navels." I did not expect him to have written anything for children at all, so this was a pleasant surprise for me.

The ever-angry god of war Monte Banahaw is smitten with the ever-alluring goddess of love Mariang Makiling. After his advances were rejected, Monte wanted to punish Maria. So he asked his alchemist brother Ba'i, the fairy of Laguna Lake, to whip up a love potion so that Maria would fall hopelessly in love with the ugliest, stupidest and laziest boy in town. Who else would that poor lout be, but Juan Tamad? 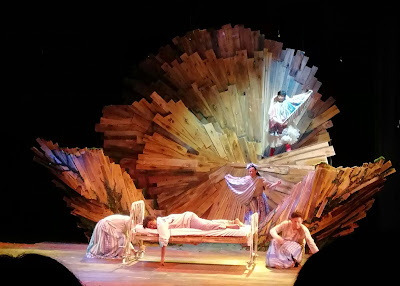 The prolific Rody Vera came up with a very engaging Filipino adaptation for theater of Joaquin's short story originally written in English. It was full of current local pop culture references so the lines never sounded old or stuffy at all. As delivered by the in-house TP actors with their usual verve and energy, with funky choreography by Ronelson Yadao and direction by Jonathan Tadioan, Vera's lines had audiences in stitches with all the ridiculous situations in this farce.

Technically, the stage design by Marco Viana was very memorable. That huge multi-tiered sunburst of wooden planks made for a riveting stage centerpiece that really commanded attention. The lights of John Batalla enhanced the dramatic look of this beautiful main set piece. Even though singing is not exactly the forte of most of these actors, the songs by TJ Ramos were a delight to hear.

Aldo Vencilao was a perfect fit as Monte Banahaw. You know how it is about short guys and their tendency to overcompensate. Monique "Manok" Nellas played an earthy and sexy Mariang Makiling, very proud of her long legs and feminine wiles. Lhorvie Nuevo was very cute as the Kerubing Ulap, a friendly cloud who could break the fourth wall and be our narrator. Antonette Go was on point with her Kris Aquino impersonation as Maria's sarcastic lawyer. JV Ibesate effectively mined the absent-mindedness of his character Ba'i for laughs. 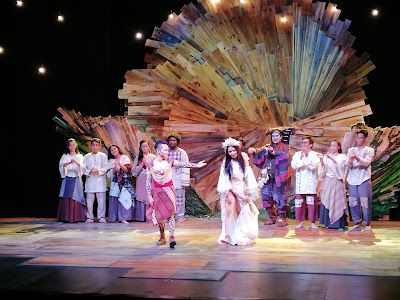 I am not so sure that Ybes Bagadiong was the best choice to be Juan Tamad. I am not referring to his acting talent, but his particular look. I felt it was an unfortunate decision that the only dark-skinned actor in the cast was made to play the "ugliest, stupidest and laziest boy in town." There was even a line that taunted him how Juan looked like a monkey ("Mukha siyang matsing!"), which called to mind that ill-conceived H&M "coolest monkey in the jungle" ad photo. I am worried how this may feed children's ideas about stereotypes against their dark-skinned schoolmates.

There were overtly sexual double entendre in so many of the lines exchanged between Mariang Makiling and the men who fall for her charms.  These naughty lines were very hilarious for sure, but at the same time, I could not help but worry about the children in the audience. I was seated beside a child less than five years old, and there were plenty more kids in the audience last night. I just hope these lines just sail above their innocent heads.

The lesson of the play at the end was not clear. We see Juan Tamad get to become very rich, however we do not see him change his lazy ways at all.  Juan Tamad never got his comeuppance for being lazy. The twist at the end about the love potion sort of sent a confusing message, as if it was saying that Juan's laziness was somehow an aphrodisiac in itself.  For me, the end the play came rather too abruptly, without exactly making very clear its message against this capital sin of sloth. 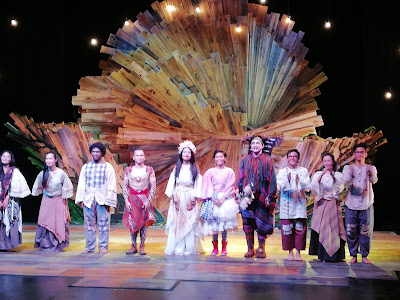 I do not want to be a wet blanket about this because overall I found this colorful show to be quite entertaining for all ages. There were scenes which were really laugh out loud funny. However, because of the reasons for concern I cited above, I would advise strict Parental Guidance for young kids who will be watching this play. Do take your kids to watch this light-hearted fun show, but do discuss and clarify its lessons with them afterwards.

"Nang Dalawin ng Pag-ibig si Juan Tamad" runs from February 16 to March 11, 2018 at the Tanghalang Aurelio Tolentino, CCP Little Theater. Showtimes are: 8 pm Fridays, 3 pm and 8 pm on Saturdays and 3 pm on Sundays. Ticket prices are at P 1,030 and P 824 each, depending on the price zone, free seating basis.