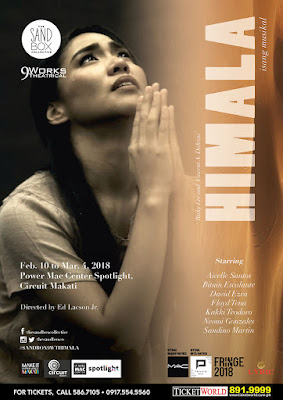 I first heard about "Himala" the musical play in 2013, when a 10th anniversary concert (MY REVIEW) of the 2003 Tanghalang Pilipino production was staged at the PETA Theater. Before then, I only knew "Himala" to be the iconic 1982 film, directed by Ishmael Bernal, written by Ricky Lee and starring Ms. Nora Aunor, which told the story of a simple girl named Elsa who developed the ability to heal diseases after having apparitions of the Blessed Virgin Mary on a nearby hill in Barrio Cupang.

Composer Vincent de Jesus had crafted deeply dramatic songs with some pretty punishing high notes, which only the best singers can sing. The original cast included such vocal powerhouses like May Bayot (as Elsa),Cynthia Culig-Guico (as Chayong), Isay Alvarez (as NImia) and Dulce (as Nanay Saling). Ricky Lee himself adapted his screenplay for the book of the play and co-wrote the lyrics.

The story of the musical follows the story of the film faithfully. Elsa has visions of the Virgin Mary on the hill, after which she can cure the sick of body and of spirit. This ability made Elsa a local celebrity. She seemed to enjoy the attention given by her coterie of pious friends and devotees. One day, an unspeakable crime happened on the miraculous hill that drove that led to escalating torment and tragedy. 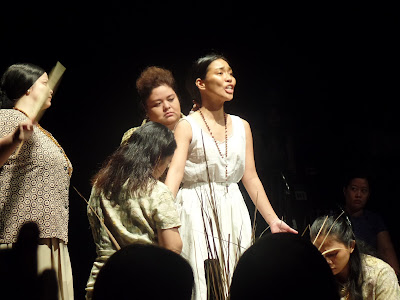 This year, on the occasion of its 15th anniversary, the Sandbox Collective and 9 Works Theatricals, decide to restage this play in full as part of its thrust to include Filipino works in its repertoire. An all-new generation of powerful singer-actors had been assembled to sing those same emotional songs for us once again.

Aicelle Santos was really pushed to go beyond all limits in the lead role of Elsa, and she positively nailed that challenging role down, both acting-wise and singing-wise.  Her two big highlight numbers came one after the other: one questioning the heavens for her misfortune and the final one addressing the crowd with a shocking confession. I've seen Santos before in "Rak of Aegis" and "Maynila sa mga Kuko ng Liwanag" and she had been excellent in both, but this Elsa of hers was in a class all its own. 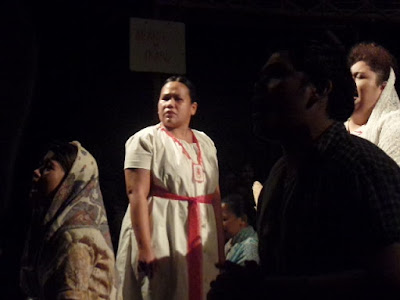 Portraying Elsa's childhood friends were Neomi Gonzales as the fragile and religious Chayong, and Kakki Teodoro as the bold and worldly Nimia. Both of them shone in their featured songs -- Gonzales in Chayong's duets with Elsa and suitor Pilo, and Teodoro in her raunchy cabaret scene and her duet with Elsa. Bituin Escalante was a notable vocal standout in her searing renditions of Nanay Saling's painful lamentations. There was a scene where was singing in one far corner, but the strength of her voice effortlessly filled up the entire room. Jenny Villegas dela Cruz played Mrs. Alba, who organized Elsa's "Seven Apostles." Her clear soprano voice floated sweetly out of the chorus as she sang harmony in that final group song.

David Ezra, looking very different from how I remembered him as "Aurelio Sedisyoso," played Orly, a dogged documentary film maker from Manila, whose humanity was also put to the test in Cupang. Sandino Martin, fresh from his two acclaimed musical films "Changing Partners" and "Ang Larawan" played Chayong's suitor, Pilo, whose pent-up frustrations were just waiting to explode. Floyd Tena, whom I only first knew from "Maynila" last year, played the cynical (and smoking!) parish priest. 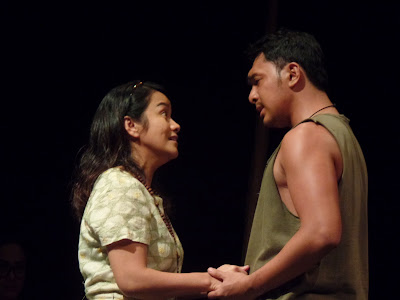 Neomi Gonzales and Sandino Martin as Chayong and Pilo

Under the visionary direction of Ed Lacson Jr., this present staging made those emotions as raw as possible. There was no orchestra, just a piano. There were no microphones used, just pure voice. There was not a single dance number, as may be expected from musicals. The whole room at PowerMac Center Spotlight was used as the performing area, with sections of the audience area also covered with thatch roofs to make us feel like we are curious onlooking residents of Cupang as well. Ads promised this show will be an immersive experience, and I completely see and felt what they mean. We felt the fanaticism. We felt the greed. We felt the tragic irony of it all.

The standing ovation that ensued after the haunting final scene was long and thunderous. The whole cast took their slow bows, many of them were wiping tears off their faces, fully taking in the moment and the appreciation of the crowd. It is just February, but as early as now, I think I had just watched a prime contender for Best Musical Production of 2018! 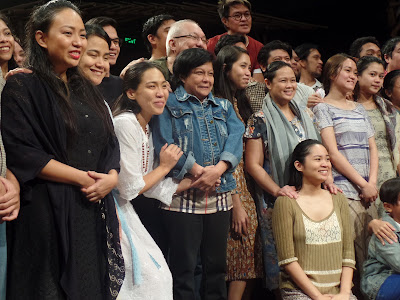 PS: Watching the press preview last night had the incomparable bonus treat of seeing the original Elsa herself, Ms. Nora Aunor. At the end of the show, after director Lacson gave his thank you speech, Ms. Aunor was called down to join the cast for photos. I felt the star-struck exhilaration of the cast as they were individually acknowledged by the Superstar. Later the original cast of the musical (Bayot, Alvarez and Dulce) all joined in to take photos with the new cast. These were really gratifying scenes to witness and remember.