The PSF Theater Festival is not only a forum for some very daring pieces of original Filipino one act plays. For me, I also get a valuable education about the theater process from the commentary given by the illustrious and learned panel of judges and theater professionals in attendance. Like for the third week shows today, I learned a lot about appreciating various aspects of theater from judges Frank Rivera and Rodel Mercado and guests Ronald Carballo, Jeffrey Ambrosio, Robert Encila, and Neil Tolentino. Their spontaneous, frank, passionate and precise comments, borne out of their years of theater experience, were very instructive and enlightening for a theater enthusiast like me, and moreso for the young theater artists in the house. 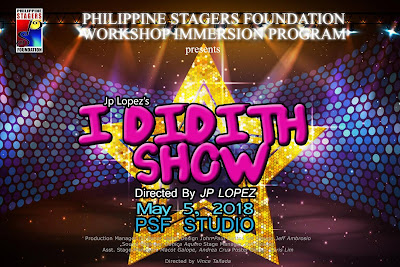 The workshop showcase this week was "I DIDITH SHOW", the first prize winning play in the 2014 PSF Theater Festival. It is written and directed by JP Lopez. Didith Lorenzo is a superstar singer who has had been hosting a long-running TV variety show, on air for the past 20 years. In this latest episode of her show, her special guest was a pretty and popular new singer named Love Moreno. The two singers vie to get the upper hand over the other during the whole show. While Love had her boyfriend Stephen (Michael Cabangon) and her manager Ferdie (Roznel Destajo), it seemed that all Didith had on her corner was her loyal gay PA Lilibeth. Or does she? 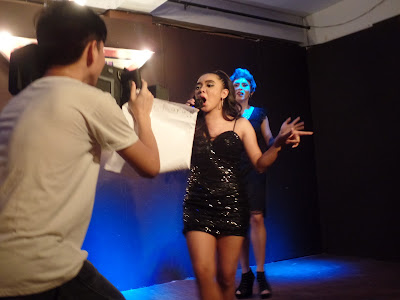 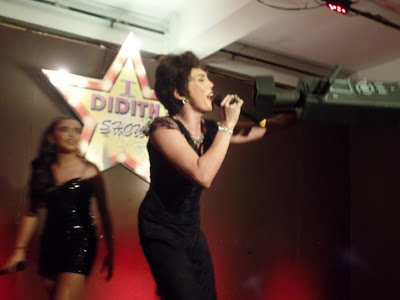 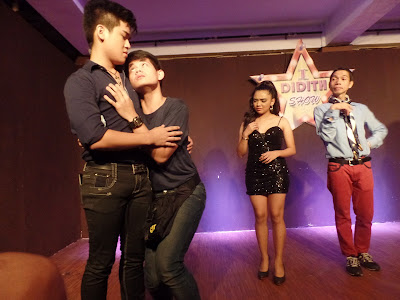 The play is very entertaining, frenetic and hilarious, roasting showbiz stereotypes. At the same time it also had some unexpectedly touching bittersweet moments. OJ Bacor delivered such a rousing bravura performance as Didith, you won't believe he only pitched in today. JP Lopez gave a wry portrayal of the show's cynical floor director Rick. Standing out among the workshoppers was Rachelle Mae Penaflor, a pretty petite girl who exuded Ariana Grande-like confidence and verve as Love; and Ado Tolentino, who gave a poignant performance as Lilibeth, Didith's big fan now her personal slave. 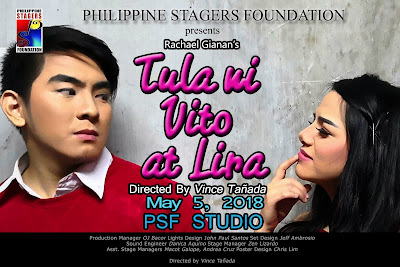 The revisited play of the week was "TULA NI VITO AT LIRA", which won the first prize during the 2016 PSF Theater Festival. The playwright is Rachael Gianan and directed by Vince Tanada. It was Valentine's Day at a Spoken Word Night in a bar, where two contestants tackle three given topics using extemporaneous poetry. The contestants that night were a shy newbie Lira and a confident veteran Vito. As the contest between the two ensue, their poetry revealed a painful past relationship that never had proper closure. 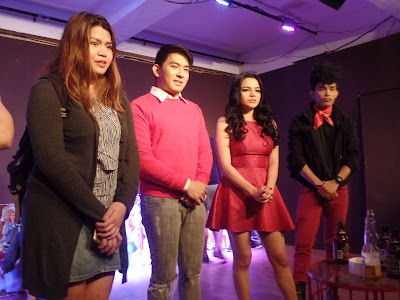 The poetic writing of Gianan in the Filipino language was gloriously eloquent. The delivery of those dueling lines by Vean Olmedo (as Lira) and Kenneth Sadsad (as Vito) was flawless, brimming with sharp emotions that just poured out so naturally from them. Those tears were flowing even when the tension was still on the rise, testifying how deeply in character these two actors were. Their chemistry together was undeniable and vital. Humor was provided by the flamboyant emcee Dindi (Jayjay Andres) to keep the play from going into full-on romantic melodrama mode. 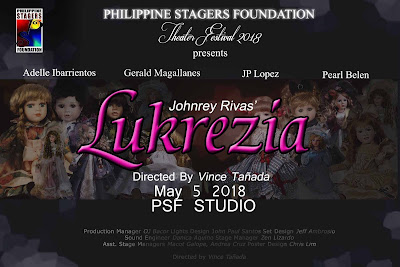 The first play in the main competition tonight was "LUKREZIA" written by first-time playwright Johnrey Rivas and directed by Vince Tanada. An exhausted set designer (JP Lopez) brought in the main prop for their play, a life-size porcelain doll. Going into the doll's history, this doll was created by a man named Vladimir with an obsession for his departed childhood friend Lukrezia. A widow named Olga, who rented a room in Vladimir's house, would soon realize why Lukrezia's face looked very familiar to her. 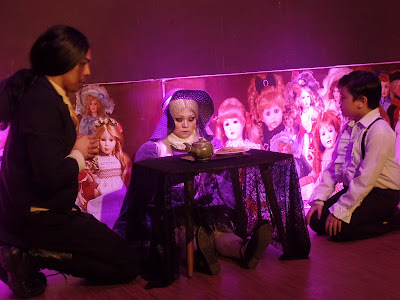 Rivas shared that his play was inspired by a minor news article with a story so bizarre that he felt it would make a perfect macabre play. Gerald Magallanes gave another one of his intense creepy performances as the disturbed doll maker Vladimir. Adelle Ibarrientos with her intentionally melodramatic acting as Olga provided some lightening balance to the dark story. The center of attention though was the riveting performance of Pearl Belen as the doll Lukrezia. With her bright open eyes and limp arms, she had no lines, but she dominated the stage the whole time with her mere chilling presence. 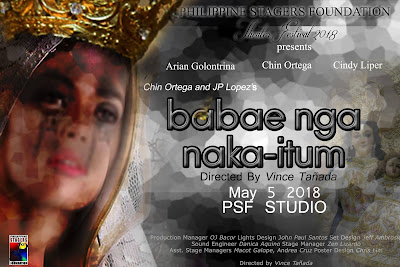 The second play in the main competition and final play of the night was "BABAE NGA NAKA-ITUM" written by Chin Ortega and JP Lopez. This was again directed by Vince Tanada. The story told about beautiful Jacinta (a boldly incandescent Cindy Liper) who was the town's celebrated prostitute, and her profound effect on the devoutly Catholic townspeople, in particular, the grotesquely deformed sculptor Ramon (Chin Ortega) and the spunky lesbian, Judit (Arian Golondrina). 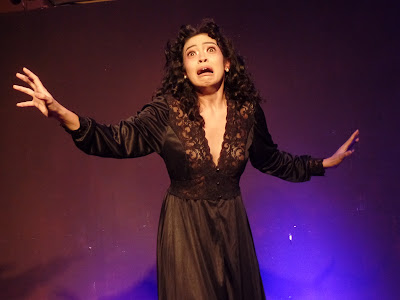 In his introduction, Lopez shared how the script, written in the Ilonggo language (with Filipino surtitles on a TV screen on the side), had been so difficult to write, barely completed four days prior to showtime. While watching the play in progress, you know you are watching something special. Even if you do not really comprehend at once every thing that was going on, this provocative material will make you ruminate about it and discuss it well after its final scene and lights out. 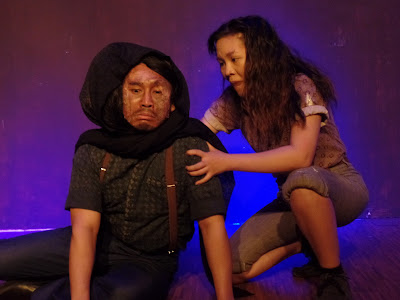 As the show was in progress, one can only stare in awe in how the director Tanada was able to achieve such a complexly artistic staging of such a philosophically-loaded, religiously-charged controversial material in so little time, with a bare stage, classically inspired choreography, with practically no props. This could only be a collaborative product of sheer genius.

The first play of the afternoon was already ongoing. This was an competing entry in the Inter--Collegiate category, "FELIPA" by senior high school students from the University of Batangas. The depressing play told the tale of the town prostitute Felipa (representing the Philippines) who was consecutively abused by a series of "customers" (representing the presidents, from Marcos to Duterte). 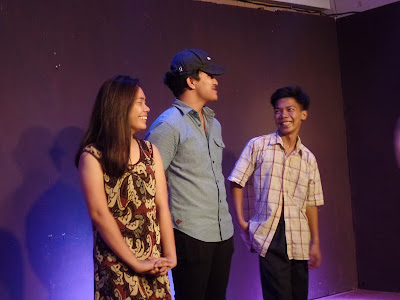 I cannot comment much because I came in towards the tail end already. A snooty "GMA" was doing a Cha-cha dance, a childish dolt "Noy" was stealing potted cactuses, then brusque "Rudy" came in for the final rape. The concept was daring, but the final execution was limited, maybe because of the very young actors. The episodes of presidential "abuses" could have been staged with better symbols. I was disturbed that Felipa was depicted as a resigned prostitute, especially when who she symbolized became apparent.