This year is the 12th year of Theater Festival by the Philippine Stagers Foundation. This is held for four consecutive Saturdays each summer, and yesterday was the second week Critics Night. Despite starting past 8 pm already because of technical problems, there were still seven original one-act plays presented -- three amateur (by participants of their FREE summer acting workshop), one competition piece by a guest collegiate theater organization, one revisted former winning play, and two new competition plays written by Stagers themselves. As before, this was held in PSF Studio in Sampaloc, Manila.

The judges for the competition this year include theater writer, director and actor Frank Rivera, artistic director of Frontline Theater Company Rodel Mercado, and award-winning young actor Christian Bables (of "Die Beautiful" fame). I look forward to listening and learning from their instructive comments about the plays being presented. Last night though, only judge Bables was present. However, actress Chai Fonacier (so awesome in "Respeto" "Pauwi Na" and "Patay na si Hesus") was also there with her insights. Also on hand that night with valuable comments was Prof. Gigi Velarde David, a choreographer, director and professor of humanities and theater. 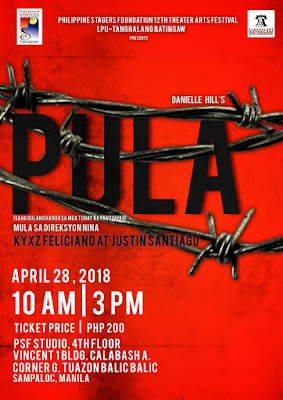 The first play in competition in the Inter-collegiate category was Danielle Hill's "PULA" presented by the Tanghalang Batingaw from Lyceum College, directed by Kyxz Feliciano and Justin Santiago. This was the same college company that won the big prize in this same category last year, and with their performance last night, they are certainly in the running for Best Collegiate Play again this year. 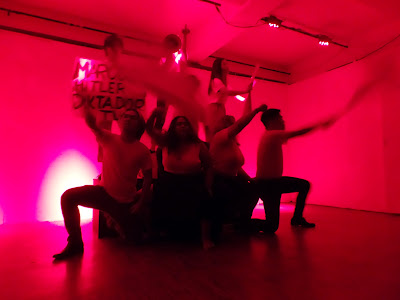 The Chorus of "Pula" 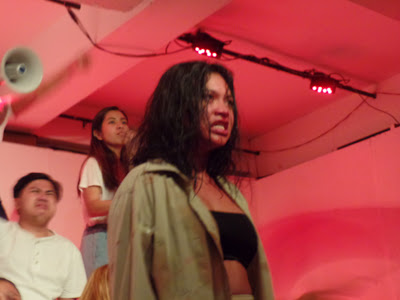 "Pula" is a play about Martial Law abuses, but this one goes for the jugular in portraying the horrible torture experienced by Lilli Hilao and Boyet Mijares. To say it is gory or explicit is an understatement. This is not a play you "enjoy." Rather, it is absorbing and disturbing, gut-wrenching and painful to watch. The staging with the dramatic red lights and pulsating music was very effective. However, the centerpiece of this intense play was the raw, bold and fearless multi-character performance of Sweet Hearty Puyong. One of the most heart-wrenching and realistically harrowing acting I had ever seen on a stage. 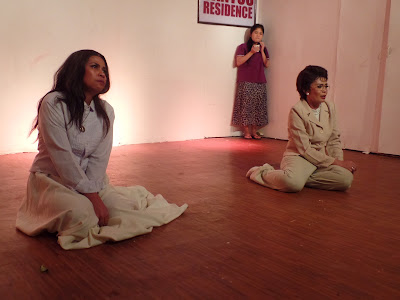 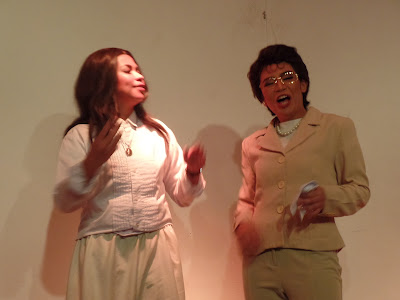 Next was a play which won the first prize in the PSF Theater Festival in 2012, "STARS" by JP Lopez, directed by Vincent Tanada. This was about Norma Aunor (Glory Ann Nacional) and Wilma Santos (2012 Best Actress Cindy Liper), two neighbors who used to be best friends, but are now bitter enemies. When they argue with each other, they use famous lines from the movies of their idols, Nora Aunor and Vilma Santos, a lot of fun for fans of local pop culture. Their maids, Jolens (Quincy Ramos) and Juday (Pearl Belen) also reflect the rivalry of their masters, but their sons Boyet (Kiel Najera) and Edward (Cedie Duller) seem to be getting along just fine. 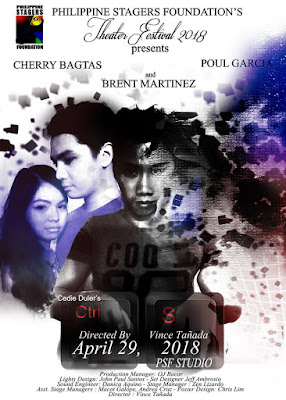 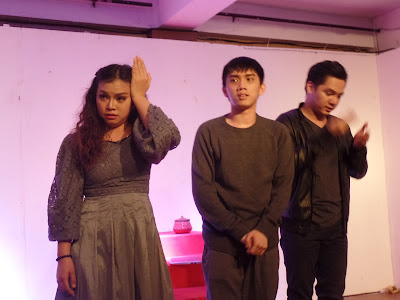 The first of the plays in the main competition this year followed, "CONTROL S" written by Cedie Duller, directed by Vincent Tanada. This was about a successful movie scriptwriter May-Akda (Brent Martinez) now devastated by the recent death of his partner Josh. The characters of the script he is working on Boy (Poul Garcia) and Girl (Cherry Bagtas) try to get him to start writing again. The concept of the play was very interesting, although I cannot say I completely understood what Boy and Girl were trying to do and why they were doing it. 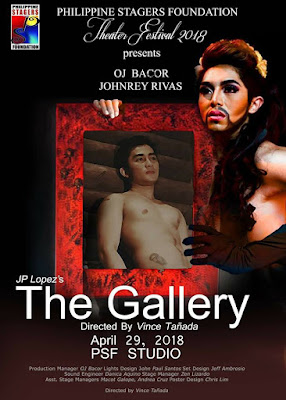 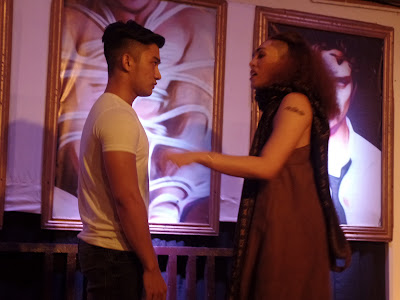 The final play of the night, which started almost 1 am already, is another play in the main competition, "THE GALLERY" written by three-time Best Play winner in the festivals past, JP Lopez, again directed by Vincent Tanada. His new play is an absurd, over-the-top play about a young drug addict gigolo Roy (Johnrey Rivas) who answered an ad by intersex artist Dion (OJ Bacor) for a model. This wild play went in all directions, with diverse elements of various genre -- comedy, sexy, horror and even politics -- all rolled into one campy, flamboyant and schizophrenic show. Its sense of the macabre simply went off the charts! I won't be surprised if this one will also win something come awards night.

Before these competition plays, three short one act plays by workshoppers by presented and critiqued by the judges and members of the audience. These were directed by Stagers who were participating in the ongoing Director's Workshop. 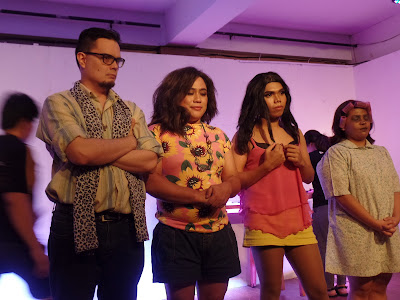 The cast of "Sa Parlor"

The first short one-act play was called "SA PARLOR" written by Atty. Vince Tanada in 2005, and performed many times over the years. This time, it was directed by Pearl Belen. This was about a pair of gay beauticians, the veteran Chit and the newcomer Chanda, who were arguing if their boss Carding was gay or not. The two actors playing the beauticians were very shrill, while the guy playing Carding was on the other end of the energy scale. There seemed to be a lot of lines missed by the nervous actors, which ended up with a puzzling plot that I did not really understand. 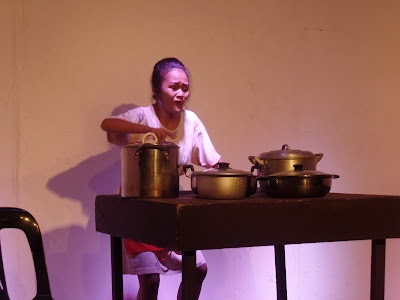 The second short one-act play was called "SA CARINDERIA" which Atty. Tanada says he wrote 30 years ago. This was directed by Chin Ortega. This was a one-woman show about a bored owner of a roadside eatery with no customers so she ends up talking to the flies and the food she cooked (and recooked). This was certainly very challenging, but this young aspiring actress named Geraldine took it on with a lot of cheeky nerve. She was not shy to make fun of her prominent chin to gain more laughs. There may have been some issues of comic timing last night (like reacting ahead of seeing what was in the pots), but this girl is a very promising comedienne. 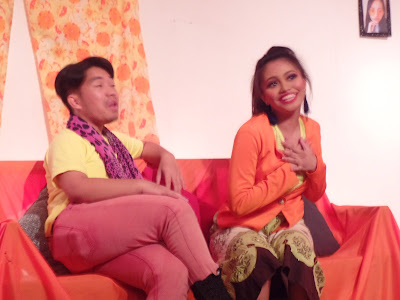 The third short one-act play was "BABAE PO AKO" written by Jordan Ladra. This was directed by Cherry Bagtas. It is about a young lady Yvonne, who had once been deceived by her first boyfriend Biboy, who turned out to be gay. Now, her new boyfriend Noel is planning to propose to her. How will she react? The pretty actress playing Yvonne was so over-the-top and loud, as was the style of actor playing Biboy. They had some funny slapstick moments together, but it was not always clear what they were talking about in all their hyper excitement.