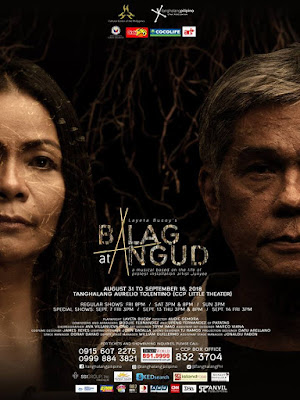 "Balag" was a bamboo formation adorned with activist sentiments set in front of the Oblation in UP Diliman in 1970 to protest against Martial Law. "Angud: A Forest Once" was an interconnected display of thousands of tree trunk remnants set on CCP grounds in 2007 to protest deforestation of mountains. Playwright Layeta Bucoy took these two pieces of outdoor installation art as her inspiration and came up with a biographical play about their creator -- artist Luis Yee, Jr. (or Junyee), and his quest for artistry against all odds.


Act 1 opened with Old Junyee falling off the stage during an art event, hitting his head and losing consciousness ("Kabaliwan"). This accident triggered a flashback of his memories back to his youth in Agusan del Norte. His traditionalist father Luis owned a motel ("Palace Hotel"), and insisted that his junior take up Commerce to help him run the family business. However, Teenage Junyee had met his artistic Muse even as a child ("Di Mapigilan") and would rather take up Fine Arts. This conflict made Junyee leave home to pursue his art.

Junyee's passion for his art eventually led him to UP Diliman as an apprentice of National Artist Napoleon Abueva. That was also where he channeled his passion into student activism activities against the Marcos dictatorship. It was during one poorly-attended rally when Junyee hit upon the idea of gathering bamboo poles and forming them into a barricade-like structure, encouraging students to hang their messages of protest against Martial Law ("Balag").

Act 2 opens with Old Junyee creating an installation artwork in front of the CCP about denuded forests using tree branches felled by Typhoon Millenio ("Baligtad na Kabundukan"). However, destruction of his work by vandals led Old Junyee to despair as he struggled to come up with another idea before the deadline. Tess, Junyee's wife of 30 years, reassured him of her loyalty and support ("Awit ng Kasal"). One day, Junyee saw villagers selling sawed off ends of tree trunks and was inspired to use them for his new artistic creation ("Angud"). 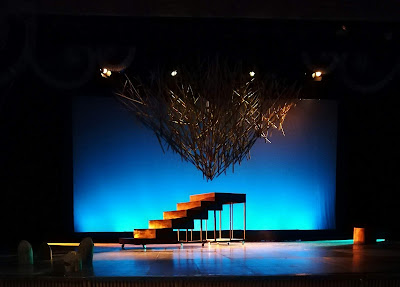 The Set Before Act 1 Began

Rody Vera was a force of artistic nature as Old Junyee. His rich and powerful voice was rousing and resplendent, especially in his solo "Kung Ako'y Iiwan Mo". Paw Castillo was very earnest and idealistic in his acting and singing as Teenage Junyee in songs like "Awit ng Tagumpay". This is his most important role to date. Bayang Barrios was ethereal as Musa -- her otherworldly vocals in "Huwag Titigil" is beyond words to describe.

Jonathan Tadioan was a haunting presence in his white coat as Tatay Luis, even long after his character passed on. Mia Bolanos was exquisite when she sang as Nanay Felisa in the song "Napagod Na" -- I wish she got to sing more. Astarte Abraham caught my attention even if she sang so little as Madre de Dios in "Kung Paano Ako Naging Leading Lady" -- I'm glad to hear her sing a lot more here.

Director Audie L Gemora was saying they had very limited time to perfect this show, but based on what we witnessed, it did not look as if they needed more rehearsals. Everything went like clockwork with the music by Dodjie Fernandez and Upeng Galang Fernandez and sound design of TJ Ramos. The choreography of Ava Maureen Villanueva Ong was full of dramatic movement to match the emotional music.

The costumes by James Reyes for Junyee were mainly black with denim, but his Musa was bedecked with bright tribal colors. As this musical was about an artist, the set design was expected to be inspired by the subject's art and this was certainly delivered by Toym Leon Imao. That upside-down peak made of bamboo hanging from the ceiling was one striking centerpiece, reflecting Junyee's adherence to all-natural materials and designs in his art. The lighting design by John Batalla and projection design by Datu Arellano complement and complete the dramatic illusions on stage. 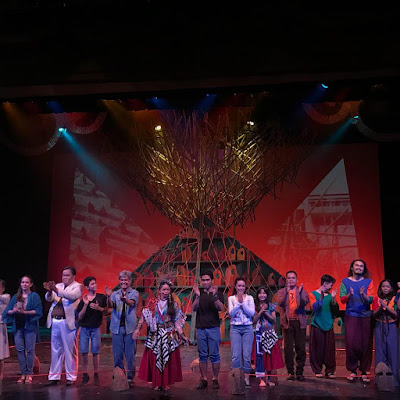 
Admittedly, it was not smooth sailing at first. It took time for me to gain my bearings in Act 1, with various diverse scenes going in and out of the stage, which may need some streamlining tweaks. There were scenes of sexy burlesque dancing in there, as well as scenes inside a funeral parlor owned by a Chinaman. Things securely got into the groove for me only during the scene in Abueva's atelier where the master shared wisdom to his ward. The two rousing protest song numbers came after that, ending Act 1 with a bang.

On the other hand, Act 2 was glorious from beginning to end. All the songs were anthemic -- melodically beautiful and thematically meaningful. As you hear one song after the other, it was impossible not to be moved by the pervading emotions in Fernandez's tunes and Bucoy's lyrics. The interplay of the music and the choreography was magical especially with the finale, which ended on a triumphant high in an uber-dramatic, Instagrammable tableau formation. You will want to give them a standing ovation right there and then.

I confess that I did not know who Junyee was before I watched this show. I was not aware that there is a kind of art called Installation Art that is only set up for a special event, but only to be to be taken down once the exhibition time is over. Beyond that, Junyee insisted on only using materials from nature as his materials. It takes an artist of rare passion and dedication to pursue this type of art with important messages, but no permanence. This show was an eye-opening and emotional journey into the genius of such an artist, both intimate and grand in its scope.

Balag is a Tagalog word that refers to a trellis or lattice work for vines. (Source: LINK)

Angud is the end part of tree trunks discarded during illegal logging operations. After a tree is felled, a hole is bored at one of its end so that the timber may be pulled with a rope (usually by carabao) out of the forest. The end part with the hole, called angud, is then sawn off and discarded for charcoal..." (Source: LINK)