Review of Sandbox and 9Works' LUNGS: Conversations of a Confused Couple 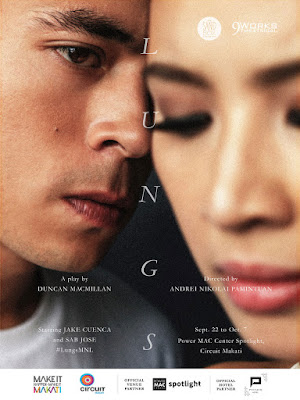 The Sandbox Collective, along with their partners 9 Works Theatrical, started the year with Vincent de Jesus' "Himala," an epic musical with a big cast of 40 actors. For their second offering for the year, they chose something on the other end of the theater spectrum, a intimate straight play with only two actors -- Duncan McMillan's "Lungs."

The stage (original design by Jodinand Aguillon) of "Lungs" is very simple yet mesmerizing -- a huge cube lined by white fluorescent lights set in the middle of the auditorium. (Before the show, Sandbox artistic director Toff de Venecia called the cube the "Ribcage" of their "Lungs".) There were no other props. There were only two actors performing within the cube upon whom all our attention is drawn. They wore regular daily clothes, nothing fancy. There were no costume changes even if their story spanned years. It was 90 minutes (no intermission) of just listening to a couple and their conversations about their relationship.

The play all started with one innocent yet loaded question - - Man asks Woman if she wanted to have a baby with him. This question triggered the Woman to launch into a whole flight of ideas about her worthiness (or not) to become a mother in a world they currently live in, and the Man assuring her that she was. They would go on and discuss (friendly to heated) about various child-related topics from practical (the color of the nursery) to theoretical (the environmental impact of a child's carbon imprint). 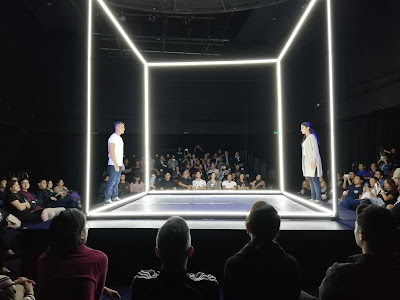 The Initial Faceoff in the Cube

The twists and turns of their conversation would make the couple laugh and cry together as they shared their thoughts and apprehensions about various fearful issues and possibilities, and such as smoking, marriage, miscarriage, or adoption, or the child growing up to hate them. This Woman (a grad student) was really very thorough in her reflection, very neurotically so, but the Man (a struggling musician) stood by her as patiently as he could bear her quirky idiosyncrasies.

It was not surprising that the role of the Woman was the wordier one and showier one. Despite being in her first straight play, Sab Jose grabbed the horns of this bull of a role and impressively stayed on track the whole way as she rode the Woman's dramatic roller coaster of physical stress and emotional upheavals. She was so funny (and never missed a beat) in her excitable breathless mile-a-minute tirades about anything and everything, gratuitously peppered with the F word. On the other end, she made us feel her deep pain during her darker moments of guilt and misery. 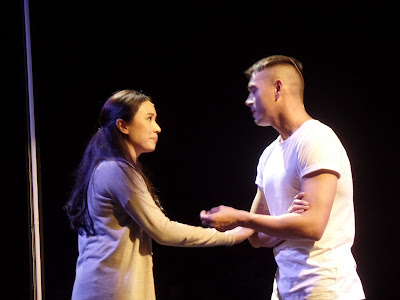 I'm sure the bigger pressure was on her co-actor Jake Cuenca. Because he is a big name movie and TV star, people will be coming to watch this show mainly to see him act in his theater debut. While the Man started the ball rolling with his innocuous question, his role for the rest of the play was mostly reacting to the Woman's insecurities and doldrums. He did get to drop a number of surprise zinger punchlines of his own. There were some obvious first-day jitters in the performance and some unclear delivery of his tongue-twisting lines, but on the whole, Cuenca more than proved his worth as an actor. He nailed it, and he knew it. His relief was evident from his jubilant curtain call bows and smiles.

There would be several scene changes as time passed between the couple. The way the script was written, along with imaginative subtle changes in the blocking or the lights (by Miguel Panganiban), you would realize that the scene was already being reset to events of another day. The way to transition these shifts of scenes seamlessly was a great challenge to the director of this material. Certainly in this production, director Andrei Nikolai Pamintuan (and assistant director Caisa Borromeo) pulled it off to make the potentially rambling nature of the script stay focused and engaging. 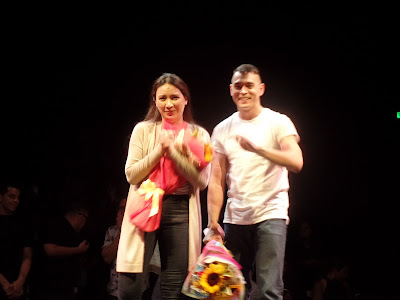 Jose and Cuenca at their Curtain Call