Review of ALL OUT OF LOVE THE MUSICAL: Binging on Ballads 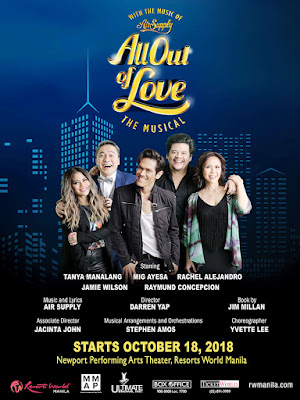 Air Supply is a band from Australia composed of Russell Hitchcock and Graham Russell, whose entire discography was a treasure trove of soft rock love songs.  With the trend successfully set by "Mamma Mia," it was inevitable that their songs would also be mined to create a jukebox musical of their own. Australian director Darren Yap merged the beloved songs with the book written by Jim Millan to come up with "All Out of Love, the Musical".

As romantics who love to sing, the Philippines as a whole was a big fan of Air Supply music. They had held many concerts in Manila and other Philippine cities several times over the years, the first of which was back in 1983 at the Folk Arts Theater. Therefore it was only logical that the world premiere of "All Out of Love, the Musical" would be held here in Manila, with an all-Filipino cast.

The setting was New York, sometime in the 1980s. Jamie Crimson was a pop star who was about to launch his second album under the label of his very strict manager Tommy King. However, Jaime was distraught about his breakup with his last girlfriend Rayne, so much that he wanted to abandon his career right there and then. King's Harvard-educated daughter Stacie decided to help salvage the disastrous business situation by helping Jamie get Rayne back.

Since the writer set the story in the pop music industry, it did not need too much innovative ideas on how to incorporate the Air Supply hits into the story. "Sweet Dreams" and "All Out of Love" were simply previous hits or new songs recorded by Jaime Crimson. "Lost in Love" was sung with an upbeat twist by Rayne as a singer at a nightclub. "Now and Forever" and "Even the Nights are Better" were also sung in a concert situation. The writer did not need to come up with some extraordinary scenario to fit these songs in.

Of course, there were also songs which had a neat contextual fit into the main love story narrative. "Lonely is the Night" was sung while riding a neon-lit yellow taxi into the city for a romantic quest. "Keeping the Love Alive" became a rousing bouncy serenade to try to get a lost love back. "The One that You Love" and "Two Less Lonely People in the World" were the songs sung while lovers were trying to sort out their differences and figuring out whether their love was worth fighting for.

Fil-Australian singer MiG Ayesa had certainly gone a long way since I first knew him as a contestant in a televised search for a new lead vocalist for the band INXS. He did not win that TV competition, but Ayesa went onto bigger things in the West End and Broadway as a theater artist. I had previously seen him onstage locally as Stacee Jaxx in "Rock of Ages" and as Robert Kincaid in "Bridges of Madison County, " both musical produced by Atlantis. This role of pop rock singing idol Jaime Crimson was definitely right down Ayesa's comfort zone, and he could definitely knock those high notes out of the park. (His understudy is Carlos Canlas.)

Rachel Alejandro's character Rayne is a strong woman with pride in her talent as a musician. I've been a fan of her stage career since her memorable turn as Lucy Monster on "Avenue Q." As Rayne, Alejandro'voice had such a rich timbre with an irresistible smoky character that projected strength of character and maturity. (Her understudy is Gold Villar-Lim.)

Tanya Manalang played Stacie, the perky and plucky new graduate who sought to prove to her father that she belonged in the family business. Manalang is a rising star whose strong belting voice is way bigger than her petite stature. I had seen her standout performances as Susan in "Tick Tick Boom" and more recently, as Joy in "Ang Huling El Bimbo". (Her understudy is Helen Enriquez.)


The first song that actually grabbed my attention in the show (and the first number to earn a major ovation in Act 1) was "Here I Am". This song was sung with sincere paternal support and concern by Raymond Concepcion, as Tommy King. One of the best sung songs in the whole show, this was unfortunately Concepcion's only featured solo. (His understudy is Juliene Mendoza.)

Jaime Wilson played Tommy King's slimy rival Kurt Swinghammer. Based on his previous musicals, we know Wilson can wail a rock song, but too bad his character did not have any solo. Red Nuestro stood out from the rest of the talented 14-man ensemble by having a sweet solo part in the song "Chances" as the taxi driver. 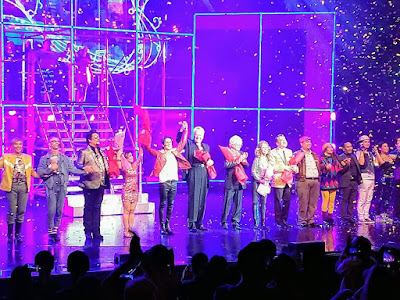 The triumphant curtain call graced by no less than Air Supply themselves!
(Photo credit: Toots Tolentino)

The story is admittedly unremarkable and unoriginal, even corny and cliche at several points. But overall, the show was still very entertaining because of the karaoke familiarity of the songs (you will have to stop yourself from singing along) and the show stopping performances of the triple-threat Filipino cast.

For an additional bonus for us opening night audiences, Russell Hitchcock and Graham Russell joined the cast during the curtain call, perfectly capping off this night of 80s nostalgia.