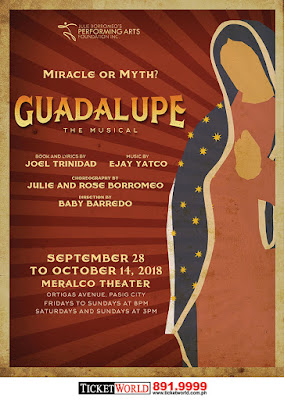 The image of Our Lady of Guadalupe is a rare miraculous reminder of one of the most famous Marian apparitions in history. The colors of this image which appeared on the apron of Aztec peasant Juan Diego never faded, remaining as brilliant as they were when Our Lady was first seen in the year 1531. It is an iconic picture that was produced by no means which was humanly possible back then, and even now.

The play began with a tour guide was narrating to her group about the history of Our Lady of Guadalupe. Then we were brought back to the year 1531 in Mexico, then called New Spain. It had only been ten years since the Spanish conquerors converted the native Aztecs into Catholicism. The middle-aged peasant Juan Diego reported to the Archbishop Juan de Zumarraga that he had seen Our Lady appear to him on the Hill of Tepeyac, and she had ordered him to build her a church on that site.

Meanwhile, the Archbishop had his own conflicts with the ruthless Governor Nuno Beltran de Guzman, who flagrantly used violent means to keep the Aztecs in check. Furthermore, the niece of the Archbishop Clara had fallen in love with his Aztec aide Luis, a forbidden love affair that needed to be kept secret. One night, Halley's comet crossed the sky, and everyone who saw it interpreted the celestial event in their own personal way.

I know how the image of Our Lady of Guadalupe looked like but I confess that I did not know much about its back story. While the main story of visionary Juan Diego was interesting, I guess it may have been too simple or bare to carry a whole two-act musical. Hence, there seemed to have been more time spent on telling the side stories -- namely, the rivalry story of the Archbishop and the Governor, and the love story of Clara and Luis -- and weaving them in to enrich the narrative.

The role of Juan Diego was played by a long-missed actor of Philippine theater, Cocoy Laurel. The last time I had seen him act in a musical play was when he portrayed the challenging role of Jean Valjean in Rep's "Les Miserables" back in the 1990s. To see him back on stage performing again was one of the biggest reasons why I wanted to watch this play.  Sir Cocoy may already be too old and infirm in stature for the role. However, he has not lost his sparkling and youthful speaking and singing voice that made him the ideal Pippin, Charlie Brown or Joseph in years past. His best song for me was "I am No One."

The lady tour guide was played by Shiela Valderrama-Martinez. Later she would also take on the role of Our Lady of Guadalupe herself. Her singing highlight was the song "Am I Not Here" in Act 2 where the tour guide was speaking on behalf of Our Lady, reassuring us that she will always be here with us. For me, this was the best song of the whole play. Later, seeing Shiela radiantly dressed in the icon's pink vestment and blue mantle made the audience gasp in awe.

The role of Archbishop Juan de Zumarraga was played by Lorenz Martinez. This character was made to sing very challenging songs  which Martinez breezed through, though he obviously had most difficulty with the song "Believe." His brave niece Clara was played by the very pretty Chaye Mogg, while her Aztec consort was played by Arman Ferrer. Their love duet "Hush" showcased their rich vocals. The role of Juan Diego's ill old uncle Juan Bernardino was played by Onyl Torres, unrecognizable with his white disheveled wig.

The antagonist role of Gov. Nuno de Guzman was played by a true-blue Spaniard Kuya Manzano. He clearly played this evil role with relish. Tagging along with the Governor was his equally vicious "lapdog" Vargas, played by Miguel Vargas, who looking like a bald Khal Drogo. This surprised me because the last time I saw Vargas on stage was back in the 1990s when he played Paris in "Paris and Alexander" with Bart Guingona. These two bad guys had a featured song of their own entitled "Burn."

The ensemble of 20 Aztecs, Soldiers and Priests sang so beautifully behind the leads. Their vocals blanketed the stage with a carnival-like atmosphere for the festive scenes, and cathedral-like atmosphere during the divine scenes. A distinct group of four singers,namely Roxy Aldiosa, Mikee Baskinas, Paula Paguio and Ian Hermogenes, were had funny moments as the friendly neighborhood Gossipers. 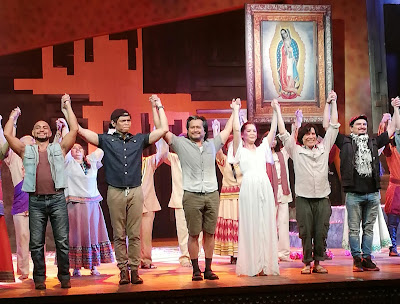 
The colorful Aztec tribal costumes, as well as Gov. Nuno's glittering finery, were designed by another revered veteran in the field, Ms. Celia Diaz Laurel. The armor and helmets of the Spanish soldiers, which looked very good, were designed by Ogie Reonal. Dance choreography was by Julie and Rose Borromeo, with fight choreography (including fencing!) by Miguel Vasquez. The geometric Aztec-inspired multi-tiered set, with the skeletal cathedral on the right side, were designed by Mio Infante. Lights by John Batalla and sound by Rards Corpus complete the essential stage elements.

The book and the lyrics of this musical were written by Joel Trinidad. The music was composed by musical director Ejay Yatco. The music was very diverse with different moods, more traditional than Yatco's usual edgy tunes, merging exuberant Mexican beats with solemn church music, while influenced by Broadway showtunes  They got no less than Repertory Philippines grand dame Ms. Baby Barredo to be the overall director, and that is as veteran as you can get to stage an original English-language musical play like this.

This is a wholesome, religious-themed musical complete with political intrigue and a love story, highly recommended for the whole family. No matter what your religion may be, that beautiful moment of the miracle of the Castillan roses and the image in Juan Diego's tilma will definitely move you, possibly to tears.