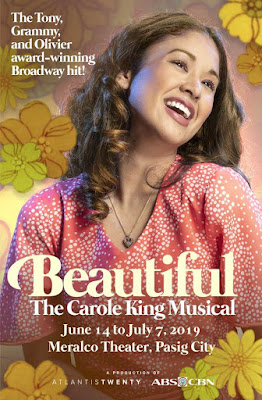 I know Carole King as the artist behind the phenomenal album "Tapestry" released in 1971. It was #1 on the Billboard Album chart for 15 weeks and stayed within the chart for the next 6 years. It won the Grammy Album of the Year in 1972, while its tracks "It's Too Late" won Record of the Year, "You've Got a Friend" won "Song of the Year." The double-sided hit single "It's Too Late/ I Feel the Earth Move" was #1 on the Hot 100 chart for 5 weeks.

This 2013 musical "Beautiful" followed Carole King's songwriting career 12 years before "Tapestry" when she was a precocious 16-year old auditioning her song in New York City. She met and fell in love at first sight with her lyricist Gerry Goffin in college and married right away within the same year. 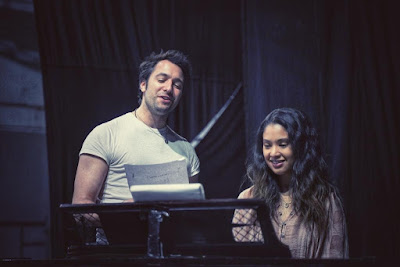 The whole play was a literal jukebox musical -- just singing one song after the other like a variety show, with no effort in the writing of the book (by Douglas McGrath) to integrate the lyrics of the songs into the story or the dialogues. It was just a simple chronological chronicle of Carole King's career and the songs she wrote, at first with Gerry Goffin and later on her own.

Carole and Gerry would sing a raw bit of the song first, then later we will hear the same song sung by the "recording artists" who made these songs popular hits, like the Drifters, the Shirelles and Little Eva. In between these song numbers, we would hear banter in the 1650 Broadway office about the song's performance in the charts and see episodes from Carole and Gerry's troubled marriage at their home or at a Vermont ski resort as the main dramatic conflict of the story.

Also featured in the story were the career and romance of their contemporary songwriting rivals and supportive real-life friends Cynthia Weil and Barry Mann. Their own set of hits  competed with those of Carole and Gerry's on the charts, like "On Broadway" by the Drifters and "You've Lost That Loving Feeling" by the Righteous Brothers. 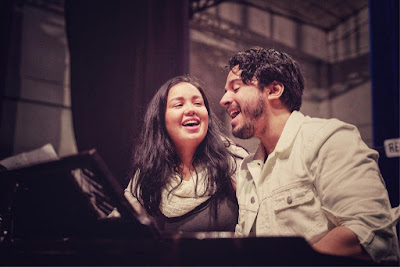 Kayla Rivera played Carole King as a mousy, old-fashioned young woman who wore simple, even dowdy, clothes and hairstyles for most of the show. In Act 1, she often got overshadowed by the noisier, more colorful characters around her. It was only when she sings with that beautifully fluid voice of hers that she captures our full attention. This was especially true when she bloomed with confidence with her powerful Tapestry solos in Act 2, particularly "It's Too Late" and "(You Make Me Feel Like a) Natural Woman." However, she was not yet convincing when she shadow-plays the piano, which was an integral instrument of Carole King's songwriting and performing career.

Nick Varricchio (last seen on the local stage in the 2015 "Saturday Night Fever" Asian Tour) played the thankless role of Gerry Goffin, who despite co-writing some of Carole's best songs, also stole her best years away from her with his irresponsibility. Mikkie Bradshaw-Volante and George Schulze often steal their scenes as Cynthia Weil and Barry Mann as they have more snazzy costumes, more bombastic singing voices and funnier lines. Jaime Wilson (as songwriter manager Don Kirshner) and Carla Guevara-Laforteza (as Carole's mom Genie) lent effective support even if they did not get to do much singing.

Tim Pavino, Markus Mann, Arman Ferrer, and Jep Go sang, strutted and glided as the members of the Drifters. Among the four, for me it was Go who stood out with his solid solos in songs like "Up on the Roof" and "On Broadway." As the Righteous Brothers, Rhenwyn Gabalonzo wowed the audience with his rich deep baritone for Bill Medley's part in "You've Lost That Loving Feeling," with Ferrer providing the tenor harmony of Bobby Hatfield in similarly impressive fashion. This catchy duet had the best audience response of the night, ironic because it was NOT a Carole King composition. Dean Rosen (as Nick of the Bitter End nightclub) and Nelsito Gomez (as Neil Sedaka) played the other male ensemble roles. 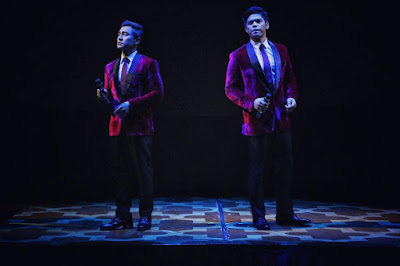 Gab Pangilinan was the elegant lead singer of the Shirelles who sang the first Goffin & King-penned #1 single "Will You Still Love Me Tomorrow?" Teetin Villanueva was Carole's babysitter who was given the break to record the original version of "The Loco-Motion" as Little Eva, with its perky pink song and dance number. Jill Pena played the fictional temptress Janelle Woods who sang "One Fine Day" for Goffin & King, only to cause their domestic distress. Maronne Cruz (as Carole's BFF Betty), Gabby Pineda and Alex Reyes played the other female ensemble roles.

Director Bobby Garcia again led a world-class team of artists and technicians to mount a Broadway-quality production to the stage of the Meralco Theater. Set designer Faust Peneyra used large panels of orange-hued geometric patterns (like those seen in silk ties from the 70s) to frame the stage, which worked well with the lights designed by Broadway's Aaron Porter (back after "Waitress" last year).

We were subtly led us through the evolution of popular culture from the late 50s to the early 70s, with the costume design of Raven Ong, the hair and makeup design by Leslie Espinosa and the joyful choreography of Cecile Martinez. Broadway sound designer Josh Millican (also back from "Waitress") worked hand-in-hand with musical director Farley Asuncion to create the perfect soundtrack to accompany the action on stage. The songs of Carole King were simply so infectious and familiar, you will sing along! 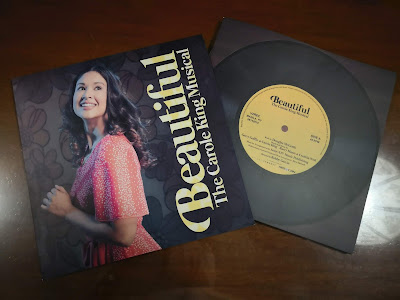 "BEAUTIFUL:The Carole King Musical" runs from June 14 to July 7, 2019, with shows at 8 pm from Fridays to Sundays, with 2 pm matinees on Saturdays and Sundays. The venue is the Meralco Theater in Pasig City. Tickets can be scored through Ticketworld, with prices range from P5,000 (orchestra center), P4,000 (orchestra sides and loge center), P2,500 (loge sides) and P1,500 (balcony center and sides).