Review of VIRGIN LABFEST XV - SET B: Of Students, Supports and Sexes 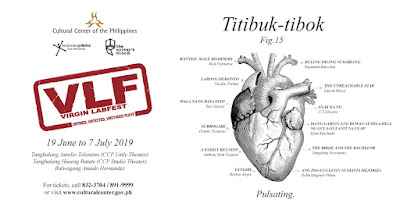 I have been watching the Virgin Labfest at the CCP for six years in a row now. The fresh one-act plays chosen for this festival had been exceptional theater pieces, and this year is already its 15th year, with the stimulating theme of "Titibok-tibok". This year, a record number of 207 scripts had been submitted and the top 12 were chosen to be staged. The festival started yesterday with the three plays of Set A.

The Staged Readings have also been grouped into sets of 2 or 3, and now costs P100 a ticket (formerly free). For Set A and B, there is a theme of "Once They Were Virgins" featuring the first VLF plays of veteran VLF playwrights, like Chris Martinez, Jun Lana, Liza Magtoto and Chris Millado. The other staged readings were plays submitted this year, but which did not make it into the top 12.

Here are the three plays of Set B which premiered this afternoon: 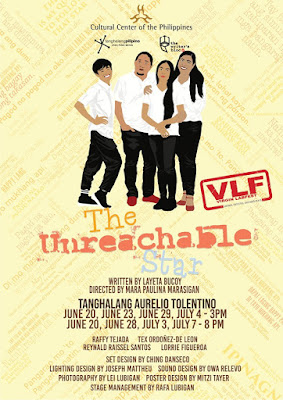 The story is about a poor family who could barely get by with their financial situation, but they will do everything so that their youngest daughter Ali, who is a freshman in UP, can continue her studies and graduate. The father relies on the patronage of their barangay captain, occasionally becoming a petty crook. The mother is a blind fanatic of a patron saint she calls Nuestra. The gay elder brother does odd jobs including driving a tricycle to help.

Raffy Tejada and Tex Ordonez-de Leon (as Tatay and Nanay) had to amp up their performances to keep the energy up in this rather static play. Reynald Santos as Kuya goes over the top with his gay antics to spice things up some more. The suspense of play hung on a mystery being kept from Ali when she came home. However, I felt that this secret did not make such a strong impact as it should when it was revealed. 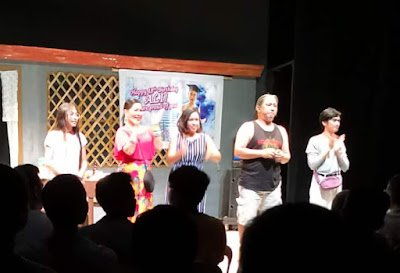 I felt this was because VLF virgin Lorrie Figueroa (as Ali) could not seem to keep up with her more experienced co-stars acting-wise. She seemed nervous and very tentative in her maiden effort. When Ali made her own surprise revelation towards the end, her announcement lacked a knockout punch. I trust that as the festival goes on, Figueroa should get her bearings and confidence up in her next performance dates. 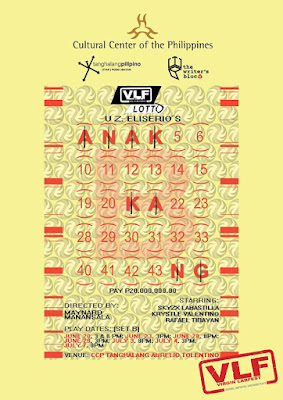 Pina's father passed away and her OFW mom Connie came back to bury him. While they were sorting out his things, Pina hotly confronted Connie for her absence in her life, while Connie defended herself by reminding her daughter of the material comforts her hard-earned money got for the family. Suddenly, Pina found the last lottery ticket which her father bought before he died, and saw that it had won them P10M.

These two characters were played by two actresses who had been acclaimed before for their performances in theater, and they were both solid here. Krystle Valentino (as Pina) made her VLF splash four years ago as the lead in the beautiful "Si Maria Isabella at ang Guryon ng mga Tala" (2015). Skyzx Labastilla was awarded for her riveting turns in "Indigo Child" (2016) and the one-woman show "Ang Dalagita'y Isang Bagay na 'di Buo" (2018). Rafa Tibayan (Valentino's leading man in "Maria Isabella") played a smaller yet marked role as Pina's activist boyfriend Niko. 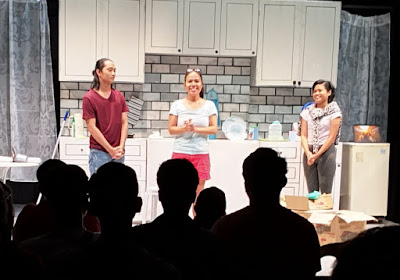 This play was a balanced mix of drama and comedy as it follows the confrontational conversation between a rebellious teenager Pina and her absentee OFW mother. It was shocking to hear a daughter speak so disrespectfully to her mother that way, but sharp witty humor effectively tempered the unsettling situations onstage. The simmering tension between the two women was paced and developed so well by the director until the whole thing just boiled over in the end. 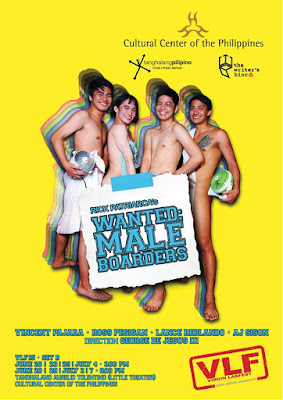 After a disagreement with his mother, Melody, a cross-dressing gay guy, moved into one of the room in a boarding house for boys, to the distress of current boarders: namely, the naive inexperienced Marco, the studious nerd Ian and the alpha male Andrew. With Ian always in his room studying and Andrew usually out with his girlfriends, Melody and Marco eventually develop a relationship beyond mere friendship.

Melody was played by Lance Reblando, a triple threat who was last seen in "Ang Huling El Bimbo." He would incorporate his talents of flexible acrobatics and even singing into his bold role. Marco was played by Ross Pesigan, whose baby-face allows him to play youthful innocents, like he did in the recent gay drama "Laro." Andrew was played by Pesigan's scene partner in "Laro," Vincent Pajara with his swaggering macho accent. Ian was played by AJ Sison, who still needed to loosen up some more in his rather tentative performance when compared to the all-out, no-holds barred portrayals of his co-actors. 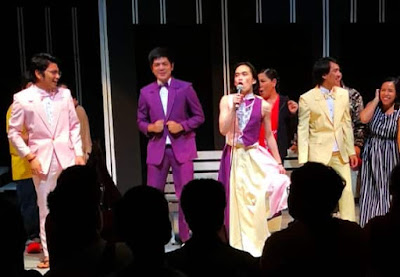 Of all the plays in this year's VLF, this was the one with the most pre-festival buzz because of its very raunchy posters and photographs of its four main actors naked with only towels protecting their modesty. True to its promise, the play frankly tackled issues of a man's sexuality, with a generous helping of naughty humor. With the exaggerated daring sexy antics and a hilarious manner of achieving a time lapse effect, this was the easy audience favorite for this set, and most probably for the whole festival.