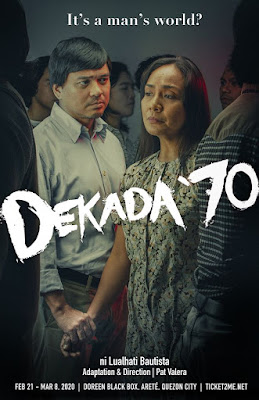 The title "Dekada '70" is a popular Palanca Award-winning literary classic by Luwalhati Bautista first published in 1983, recognized for its brave political and feministic stand. It was adapted into a film by Chito Rono in 2002, shown during the Metro Manila Film Festival, starring Vilma Santos, Christopher de Leon and Piolo Pascual (who swept as Best Supporting Actor in practically all award-giving bodies that year for his role as Jules). I am not proud to confess that I had not read the book yet, nor was I able to watch the film before. Therefore I watched this musical play without any knowledge of its full plot.

Amanda was the subservient wife of self-made architect Julian Bartolome, and loving mother to a brood of five rambunctious boys, namely Jules, Gani, Em, Jason and Bingo.  While Amanda yearned to find a job of her own, Julian imposed his stern objections for her to do anything more than be the homemaker she had been all those years. Amanda realized that if she went on living like this, she will die without leaving any substantial legacy.

The main story begins towards the end of the 1960s, when Jules was already in college and exposed to political activism via his close friend Willy. When Martial Law was declared in 1972 and Willy fell victim to bullet during a rally, Jules left home and took his fight to the mountains as an armed rebel. Meanwhile, Em took up journalism in UP where he took up the same fight, but using words.

"Dekada '70" was basically the story of one regular middle-class Filipino family during that turbulent period of time in our near past. This family's wholesome bourgeois existence was disturbed when children went to college, became politically aware and made their own decisions. The family also personally experienced corruption, abuse and tragedy at the hands of government authorities. Meanwhile, while there is a struggle for class freedom in society, there was also a struggle for personal freedom within the home. 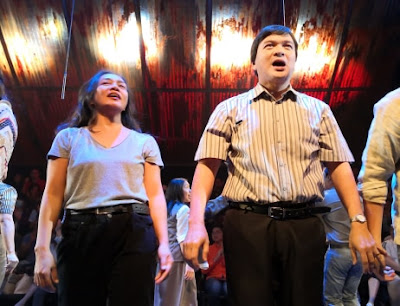 Stella Canete-Mendoza was riveting as the central character of Amanda Bartolome. It was her journey from her first childbirth experience, through her years as dedicated wife and mother, up to her firm decision to act upon her own liberation. Her first song "Gusto Ko, Pero" was her Shakespearean soliloquy. This same inner conflict in women that Bautista integrated into the politics of the story is still being tackled in current cinema, like "Marriage Story" as a recent example.

Her real-life husband Julienne Mendoza (a favorite actor of mine since I saw him in the first run of "Rak of Aegis" in 2014) played his proud and toxic character of Julian with remarkable restraint, just as a typical father-figure was naturally expected to act. Just when I thought he would not have a song of his own, he delivered the song "Minsan May Tahanan" before the show ended with palpable vulnerability. 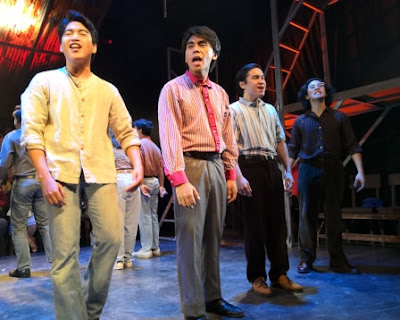 Jon Abella played the eldest son Jules, who underwent a dark and disturbing transformation when his eyes were forced open by political violence. His powerful singing voice was showcased in his song "Balikat," which expressed his emotions at a friend's unjust death. Vincent Pajara played the second son Gani, who got married first and enlisted in US Navy for financial stability. Boo Gabunada played the middle son Em, who became a journalist against his father's wishes for him to take up something more stable. His frustrations were expressed in his solo "Boses ni Em" which closed Act 1. (Esteban Fulay, Jr. alternates as Em.)

Iggi Siasoco and Abe Autea started out with childish mannerisms as their characters Jason and Bingo were still in elementary in Act 1. However, emphasizing their wacky youth early on made their dramatic moments later in Act 2 all the more heart-rending, especially with the ordeal Jason had to go through. On the other hand, Autea led the incredibly sad and tear-jerking song "Kapatid" on which he also played the acoustic guitar. 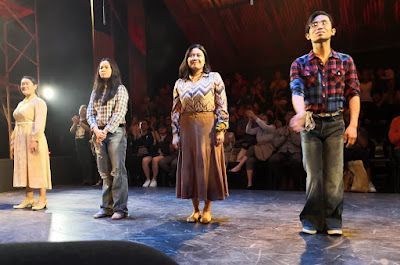 
Victoria Mina played Tess, Amanda's friend who was the mother of Willy. Gel Basa played Evelyn, the unplanned wife of Gani. (Justine Pena alternates as Evelyn.) Matel Patayon played Mara, Jules' partner in the armed resistance who later became his wife. These three women were given a beautiful song to sing ("Payapang Pampang") together with Amanda. Paw Castillo gave a fervent portrayal of Willy (Juan Miguel Severo alternates as Willy, which I think is an interesting piece of casting I'd like to see), whose activist views were expressed in his song "Sigaw ng Bayan". Phi Palmos, Tope Kilatchko, Sabina Basilio and Rona Raissa Angeles play prominent roles in the ensemble.

Director Pat Valera wrote the adaptation for the stage as a musical, acting as dramaturgist, as well as song lyricist. His epic vision resulted in this intensely-emotional, heavily-dramatic piece of theater. This musical (with music by Matthew Chang, lights by Meliton Roxas Jr. , set by Ohm David, costumes by Hershee Tantiado) was first staged under U.P. Dulaang Laboratoryo in June, 2018, and was restaged later that same year in the Doreen Black Box, Areté, Ateneo de Manila. I was not able to see it back then. 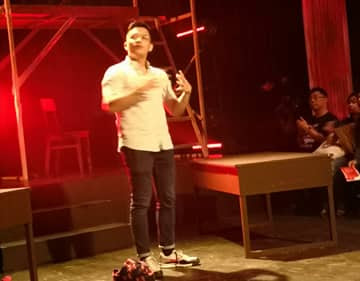 This year, Black Box brings back "Dekada '70" to the Arete once again, this time as a new member of Philstage. This production is surely on its way to securing a number of Gawad Buhay citations. On top of performance and technical merits, this show carried a strong call for vigilance and pro-action in the face of oppression. The rousing Act 2 opening song "Bayan, Bayan, Bayan Ko" made sure this urgent message came across, as relevant now as it was all those 40 years ago.

This current staging of DEKADA '70 runs at the Doreen Black Box, Arete, Ateneo de Manila from February 21 to March 8, 2020. Show times are Friday and Saturdays at 8 pm, with 2 pm matinees on Saturdays and Sundays. Ticket prices at P1200 (Gold), P1000 (Regular) and P700 (for students). The show is about 2 hours and a half long, with a 10 minute intermission. The first two weekends are already sold out, so hurry to snag those remaining tickets for the closing weekend.