Review of PETA's UNDER MY SKIN: Horizons of HIV 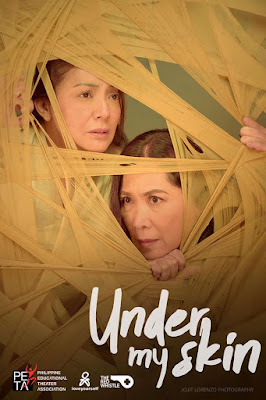 The scourge of HIV-AIDS in the Philippines is still growing leaps and bounds even now. The present statistics are alarming, adding a staggering 36 new HIV patients a day in 2019. This number only stood at 2 new patients a day just 10 years ago. This is despite what seemed to be repeated information campaigns about HIV coming from all forms of mass media, the theater stage included. This new play written by Rody Vera attempts to reeducate its audiences with how people nowadays get HIV-AIDS and what can be done about it.

Dr. Gemma Almonte was a physician who had dedicated herself to the continual study of HIV and manage cases of HIV referred to her. Her role was basically what held all the stories told in this play together. On opening night, it was Roselyn Perez who played the good doctor in her first professional play in Filipino in her 40+ year theater career. Perez had already played an AIDS doctor before in "The Normal Heart" for which she won awards. Here, Dr. Gemma was mainly a narrator and an educator. However, she was also given one dramatic moment of pure empathy with a young AIDS patient she was particularly attached with, and Perez worked that scene for all its worth. (Her alternate is film actress Cherry Pie Picache, and that should also be something to catch.)

Dr. Gemma's newest patient was Jonathan had concomitant infections of pneumonia and pulmonary TB. When his HIV test turned out positive, the news caused much anxiety for his current partner Greg, his ex-lover Syd (Eko Baquial), and Syd's younger current lover (Jarred Jaicten). From whom did Jonathan get it and to whom had he passed it on to? How can a partner support his infected partner? This central story was the focal point around which discussions about HIV's effects on gay relationships revolved.

Mike Liwag played the frail Jonathan, while Gio Gahol played his terrified lover Greg. Both of these actors made a mark in excellent indie films last year, Liwag in "Culion" and Gahol in "Sila-sila." The conflict Greg faced may be the knee-jerk reaction of many HIV patients when they first hear the news, and Gio . The highlight of these two roles was a spectacular curtain dance routine representing the birth of their love affair. The two actors get to show off their athleticism and grace as they perform acrobatic moves on the flowy apparatus. (Miguel Almendras alternates as Jonathan, while Anthony Falcon alternates as Greg.) 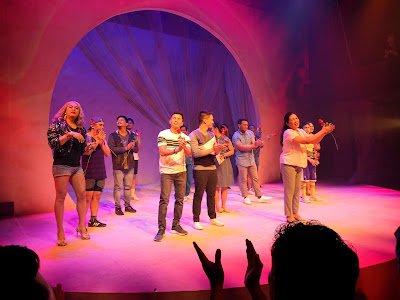 Dino was a sickly 14-year old boy brought to Dr. Gemma by his mother Aling Loida for a chronic cough. When his test result was unexpectedly positive, Loida wondered how her Dino got it when all he did was play DOTA with his friends. Dylan Talon is already college graduate but because of his slight build, he could still pull off this key role of Dino, a young teenager, with disturbing realism. Kitsi Pagaspas was a natural in her serio-comic role of a harassed mother, somewhat like her role in "Charot!" but dialed down given the nature of this play. (Her alternate is Lotlot Bustamante.)

Mary Rose was a stressed-out mother who had a five-year old son whose diarrhea never got well. She went to have it checked with Dr. Gemma, and it turned out he was HIV positive, which meant that he could've only gotten it from her. Now, how did she get it? How about her other kids? Gold Villar Lim played the shell-shocked Mary Rose in her fear, despair and indignance. (Her alternate is She Maala.) Mico Esquivel played her husband Louie during his singular fateful moment of irresponsibility which led to disastrous results. (His alternate is Bene Manaois.)

There were two other episodes which were played out like breaks from the main storyline. Both segments featured Dudz Terrana in full drag. In the first, Terrana was a comedy bar performer who just accompanied his friend to the HIV testing center and decided to take the test himself. This may seem dry on paper, but here, this scene was given a full stage production treatment, complete with chiffon curtains and graphic projections to show the results per patient's birthday.  In his second scene, Terrana was Mother, the owner of a beauty salon who treated his employee (Jason Barcial, alternate Joseph Madriaga) unfairly when he tested HIV positive. His monologues were replete with gay-speak which flew over my head but those who understood were all laughing their heads off. 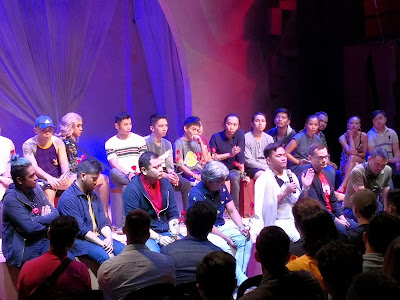 Talkback session after the show.

Director Melvin Lee had to harness all his imagination and creativity to make a show about deadly serious and morbid topic like HIV-AIDS entertaining and engaging, and he succeeded. There was enough comic relief without totally undermining the serious advocacy behind it, and Lee made sure that this critical balance was kept intact. Teresa Barrozo (composer and sound designer), Benjamin Padero and Carlo Tabije (production design), Ian Torqueza (lights designer), Steven Tansiongco (video designer), Nicole Primero and Carlos Deriada Jr. (choreographers) kept the proceedings interesting throughout the show -- not a dry moment at all.