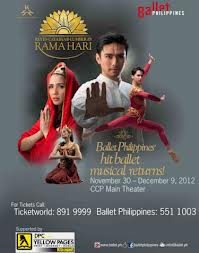 I have long heard about the 1980 theater classic "Rama Hari," who starred Basil Valdez, Leo Valdez and a then relatively unknown singer named Kuh Ledesma.  This epic show was  a collaboration among giants in the theater world.  The choreography was by Alice Reyes, the founder of Ballet Philippines.  The libretto was by Bienvenido Lumbera, a National Artist in Literature, adapting stories from the Indian epic "Ramayana". The music was by Ryan Cayabyab, who was only 26 years old back then when he wrote the score.  The set and costumes were by the late Salvador Bernal, also a National Artist. 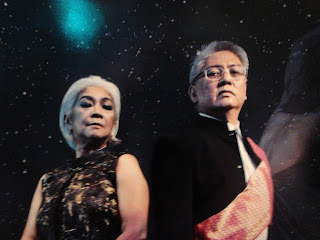 This year, Ballet Philippines (under Ms. Margie Moran) brings all the magic back to the CCP from November 30 to December 9, 2012, with a cast headed by pop stars Christian Bautista and Karylle.  This is must-see theater!

Must see, yes.  But I have not had the time to go buy tickets.  Then just earlier this week, I chanced upon a promo in Facebook for free tickets to Rama Hari from herworld.com.  I just answered the questions and shared their FB status, and did not think much about it anymore.  Then, last Thursday November 29, while doing surgery in the operating room, I unexpectedly get a call from Ms. Kae of herworld.com announcing that I had won THREE free tickets to this show on December 1!  I picked up the tickets that very afternoon.

Being a Saturday, my clinic on December 1 was only supposed to be up to 2 pm. However, it did not end on time.  I saw my last patient by 4 pm.  Without having eaten lunch yet, I immediately went home to pick up my wife and daughter.  We unfortunately reached the CCP Main Theater already past 6:30 pm.  We barely sat down, already regaled by the clean white stage design, and Christian Bautista's amazingly soaring voice that we caught, when after he sang, the intermission was announced!  We barely caught the last 10 minutes of Act 1.  So this article will basically be a review only of Act 2.

Act 2 tells the story of Rama and Sita encountering the evil brother and sister duo Ravana and Soopranakha.     Sookpranakha lusts after Rama and tries to seduce him.  Sita was deceived, lured and abducted by Ravana.  Rama enlists the help of Monkey King Hanuman to help him get Sita back.  Will the devoted couple ever get back together again?

Wait a minute, isn't that already the whole story we read in all the press releases for this show?  So what on earth happened in Act 1?  Anyway....

It took a while to figure out what was going on onstage.  The conceit here is that the story of Rama and Sita were being simultaneously told in both dance and song!  While Christian and Karylle were playing Rama and Sita as actors and singers, there were Jean Marc Cordero and Katherine Trofeo  playing the same characters Rama and Sita as ballet dancers.  Even the supporting roles of Ravana, Soorpanakha, Hanuman and Rama's loyal brother Lakshmana, have both singers and dancers to represent them.  Your eyes will be very busy following all the action on stage, not to mention the English subtitles they are flashing overhead!

When it reached the Ravana/Soorpranakha episode, I did not expect the language of the play to turn modern, funny and even vulgar!  There were definitely Parental Guidance moments in that part of the play, not only in the dancing, but also in the song lyrics! 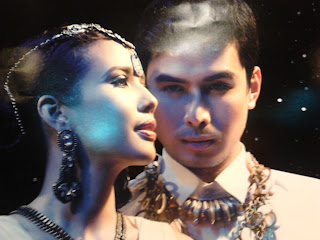 Christian Bautista and Karylle really carried the show very well as Rama and Sita.  They both look regal in stage presence and demeanor.  And their singing is flawless!  Soaring and effortless, this was a vast improvement of my previous viewing experience of their performances in "West Side Story" years back, which was sadly lacking in excitement or power.  But tonight, their performances as Rama and Sita were memorably stellar, though both were a bit stiff in the dancing department but we can overlook that.

As for their ballet counterparts, Katherine Trofeo danced Sita very well indeed.  Very very graceful.  That part where she was being ravished by Ravana was heartbreaking and dramatic.  On the other hand, Jean Marc Cordero, in my opinion, unfortunately did NOT have bearing enough to look like a Rama.  He did not feel credible as the King and Hero.  The male dancers who essayed Lakshmana (Luis Cabrera, Jr.) or Hanuman (Emmanuelle Guillermo) all had better physicality than Jean Marc, so he pales in comparison when he is dancing with these other guys.  His ill-fitting old-rose-colored outfit did not really complement him as well. 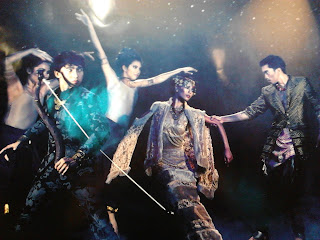 The singer who played Ravana (Christian Rey Marbella) had a fantastically high voice.  His songs were reminiscent of those of Judas in "Jesus Christ Superstar."  The more famous Ravana may have been Robert Sena, but Mr. Marbella did not disappoint.  The dancer who played Ravana (Timothy Cabrera) similarly had that appropriate sinister look, presence and dancing skill.  The singer who played Soorpranakha (Amparo Sietereales)  had a lot of fun with her naughty role and sang powerfully with evil glee, and so did her ballet counterpart (Rita Angela Winder) match this with lustful dance moves.  The singer who belted the songs of Hanuman (Breznev Larlar) had a strong voice to match his sense of humor, as did the dancing counterpart of this simian role (Guillermo) with his physical comedy.

"Rama Hari" was really a stage experience of a different sort we rarely encounter now.  The live music played by the Philippine Philaharmonic Orchestra, with the amazing vocal stylings of the UP Concert Chorus, was perfectly rendered and in sync with the busy stage action. It is indeed must-see theater.  Go catch it as it runs only up to December 9, 2012.
Posted by Fred Said at 3:20 PM