PAMANA: Relive the Spirit of Ninoy and Cory! 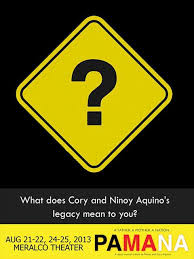 "Pamana" tells the story of a typical low middle-class Filipino family.  Lola Azon is a retired Metro Aide street sweeper during the Martial Law time and a big admirer of her namesake, Pres. Corazon Aquino.  Her son Edgar has grown disillusioned with how the government went after the EDSA Revolution, so he decided to be an OFW, working in Dubai, then Switzerland. Azon's grand-daughter/Edgar's daughter is Trina, who has to make a decision whether she will join her dad abroad or stay put in the country she is just discovering to love. 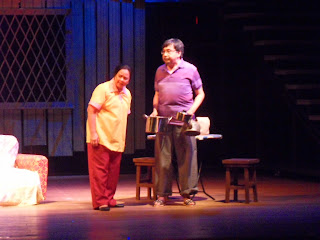 The actors all did very well to essay their roles.  Of course, Malou de Guzman was very effective as Lola Azon.  We believe her and we feel her pain.  She had perfect chemistry with another theater veteran Bodjie Pascua, who played her husband Turo.  Their number together "The Noise Barrage" was very memorable. Kakki Teodoro had a nice soprano lilt in her voice. As Trina, she represents the idealistic youth. I liked her best in "Ang Tatay Ko" where she tells us about her long-distance relationship with her OFW dad via the Internet. It was refreshing to see Jett Pangan in a Filipino play after "Jekyll and Hyde" and "Nine".  His voice is really solid as he tackles his rather one-dimensional cynical role of Edgar the best he could.

The best and most original part of the play for me was the very first major musical number, where there were parallel stories being told simultaneously, Lola Azon telling us how she was inspired by the Ninoy Aquino funeral procession in 1983, as Trina tells us how she was inspired by the funeral of President Cory in 2009. The presence of those four honor guards, whom we clearly remember steadfastly stood around President Cory's coffin for several hours during her actual funeral parade, lends further sentimental punch to the scene. 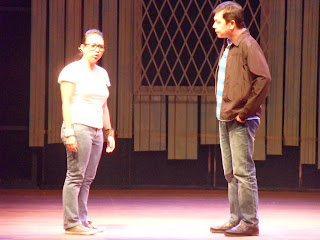 As for the rest of the play, truth to tell, the family conflicts it tells us are simple, common and oft-tackled in movies and other plays already.  It was only the way that this story, which spans three generations, had been integrated with several inspirational video messages of Ninoy and Cory Aquino which distinguish this play from others.  We will revisit the best of the best moments and memorable quotes of the two dearly departed icons in the videos edited by Jun Reyes.  Ninoy's poem about the "Candle of His Life" was especially beautiful, poignant and apt.

I can't explain exactly why, but somehow I felt that the Meralco Theater was too big for this play. The material seemed better fit for a smaller stage.  I felt that they had some difficulty filling up the big stage.  I sort feel that it might work better and raise more goosebumps in a more intimate venue like the PETA Theater.

For me, the only sequence that actually needed that big of a stage was the interpretation of Jim Paredes' EDSA-1 anthem "Handog ng Pilipino sa Mundo", complete with a simulated tank and flag waving.  The images during this big number were haunting and truly captured the essence of that historic event. 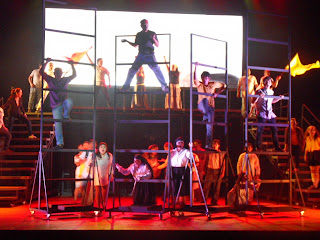 This show is a production of the Ninoy & Cory Aquino Foundation in partnership with Indie.Go Media and the Philippine Educational Theater Association (PETA).  It calls itself a docu-musical tribute to Ninoy & Cory Aquino.  Its aim is to remind Filipinos of the exemplary lives of the elder Aquinos, Ninoy's "spirit of sacrifice" and Cory's "faith and selflessness."

Being a play about political figures, this show is politically-charged.  Knowing then that this show is a tribute, you do not expect it to be an impartial version of our country's recent history.  This show is "yellow" through and through, and targeted for a "yellow" (or at least unbiased) audience as well. The writer Rody Vera did try to balance this with the point of view of the Edgar character who was disappointed with the country after EDSA 1 and left.  This is NOT for the staunchly anti-"yellow" (who probably have a different version of events), unless they can respect the spirit of the proceedings with an open mind and a civil tongue. 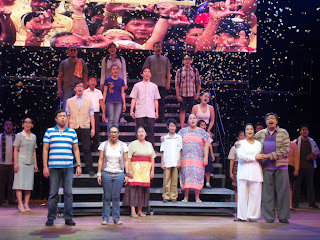 I was originally supposed to have attended the gala night scheduled on Ninoy Aquino Day, the 30th anniversary of his assassination at the airport tarmac.  However, because of the adverse weather brought about by the enhanced monsoon, that gala show was cancelled and deferred to Saturday night.  The event was supposed to have been attended by the Aquino family, including President Noynoy Aquino himself.  To watch this play with the children Ninoy and Cory left behind in attendance would have been a more emotional experience.

Kudos to director Maribel Legarda, musical director Vincent de Guzman, esteemed composers Ryan Cayabyab and Fr. Manoling Francisco SJ, and the rest of the PETA cast and crew for bringing this inspirational story to life in a form so vivid and sincere.  This may not have been a perfect play, but it is a perfect tribute. 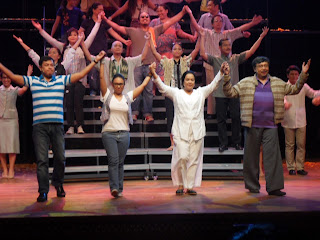