My Yearend Roundup: THE BEST OF PHILIPPINE THEATER 2019

For the year 2019, I had seen and written about 44 theater productions: 13 musicals, 18 full-length plays, and 15 one-act plays. Not included in these citations were the numerous musicals which were restaged this year like "Himala," "El Bimbo," "Binondo" and "Rak of Aegis" (again)

I will list here what I feel were the best among those theater shows I have seen and written about for 2019. 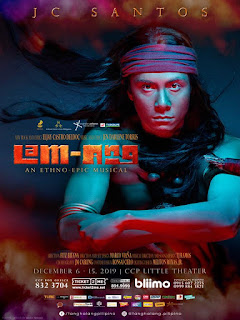 Popular movie star JC Santos was an inspired choice to play the lead title role, making a most charismatic Lam-ang. Handsome of face and physique, Santos drew attention to him whenever he was onstage, even when his character turned to the dark side at one point. Anna Luna matched Santos' stage presence as the mysterious Kannoyan. Even when she only came out in Act 2, Luna's Kannoyan attracted Lam-ang with her sense of compassionate leadership, as well as her ability to engage him in naughty banter. Tex Ordonez-de Leon played the story-teller Baglan. From the opening scene to the finale, her hypnotically robust singing voice would imbue the entire three-hour run of the show with haunting dramatic authority.

The music, sound engineering, props, costumes and choreography of "Lam-Ang." The costumes and sets of "Adarna." The catchy jingle tunes of "Charot." The period costumes of "Miong." 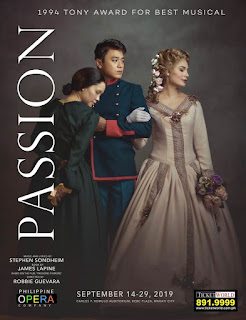 I remembered Fosca to be desperate, but not as insidiously manipulative as Shiela Valderrama-Martinez portrayed her last night. Her heavenly singing voice was beautifully radiant, shining though the severely deglamorizing make-up and drab gowns she had on. Vien King makes his leading man debut as Giorgio. At first, King seemed too young to be the heroic Capt. Giorgio. Because of his youthful countenance, Giorgio's dalliances with Clara and Fosca looked like May-December affairs, which gave these liaisons another layer of danger and recklessness. This relative youth of King's Giorgio actually worked in the show's favor, since it gave context to the decisions Giorgio made, which may be puzzling if made by a more mature man. 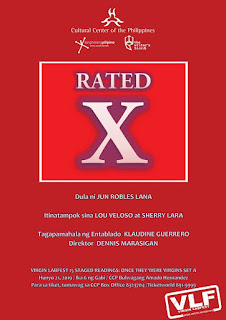 Two 70-something senior citizens were stuck in bad traffic jam. Since they did not have a driver that day, Elvira had to drive her husband of 45 years Manolo to the hospital because he seemed to be suffering a heart attack in progress. Lou Veloso's acting was very restrained, owing to the fact that he was playing a weak man slowly succumbing to a heart attack. This situation allowed the ever-luminous Ms. Sherry Lara to shine brilliantly for all she's worth. In spite of the fact that she was just sitting down on a chair for practically the whole play, Lara's Elvira was funny, naughty, raunchy, heartbreaking, poignant, beautiful -- one of the best one-act play performances I had ever witnessed. 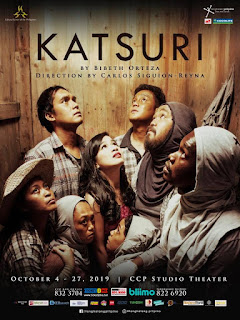 Written by: Bibeth Orteza (based on John Steinbeck's novella "Of Mice and Men")
Directed by: Carlos Siguion-Reyna

With his hefty body build, Jonathan Tadioan was the natural choice to play the bulky hulk Toto (Lenny in the book). Tadioan's Toto was a gentle giant teddy bear when he tells about his love for soft furry rabbits and puppies. However, he can also exude an air of danger when provoked as he forgets how strong he is. His co-stars' best scenes were those they shared with him. Marco Viana was able to effectively convey George's deep sense of concern for his mentally-challenged friend Toto, trying his best to keep Toto out of trouble. Such was the genuineness of George's love which made his final decision all the more painful. 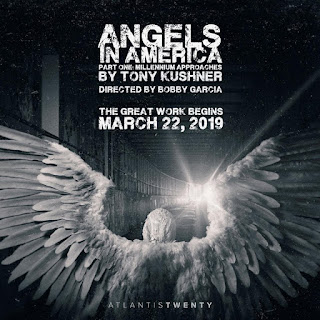 It was late 1985 in New York City. Prior Walter shows his boyfriend Louis Ironson the Kaposi Sarcoma lesion in his arm, and confessed that he had AIDS. A macho, brash and influential lawyer Roy Cohn does not accept he had AIDS, a disease associated with homosexuals, instead calling his disease liver cancer. A mild-mannered Mormon clerk of court Joe Pitt struggles with his delusional pill-popping wife Harper and his closeted homosexual urges.


Topper Fabregas brought us along Prior Walter's painful journey from the fabulous queen to the frail shadow AIDS reduced him to. Art Acuna was an acting powerhouse as Roy Cohn, totally subsuming the fearsome arrogance of his character. Markki Stroem was perfectly cast as Joe Pitt, clean-cut boy-next-door, with a secret burning his soul.

The stage direction, compact set designs and graphic projections of "Angels in America." The stage direction and sliding front wall set design in "Stop Kiss." The set design and King Lear's costume in "The Dresser." The round set and lighting design of "Dancing Lessons." The cozy living room in "Father's Day." 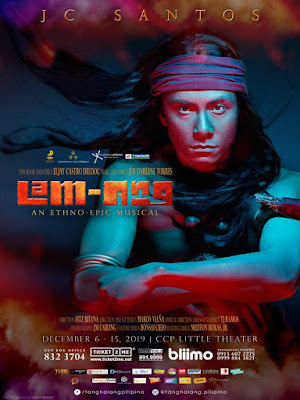 I definitely knew the name of Lam-Ang, the central character of an pre-Hispanic Ilocano epic, since my high school days. It is acknowledged to be the oldest among the folk epics of Luzon. However, when I was racking my brain today to try and recall his story, I frustratingly drew a blank. So when I went to watch this new Tanghalang Pilipino show this afternoon, I had absolutely no idea what the plot was going to be.

This was Tanghalang Pilipino second stab at making an original musical out of a local ethno-epic. The first one was the Bicolano epic "Ibalong" (MY REVIEW) back in 2013. However, I am particularly excited for this show because this was only the third new original Filipino musical to debut this year, after PETA's "Charot" and Rep's "Quest for the Adarna".

Lam-ang grew up without his father Lokan, a chieftain who never came home from war. When he grew up to be a strapping young fighter, Lam-ang left his home against his mother Namongan's will to find his father. After he was able to kill the headhunters who caused his father's death, Lam-ang was anointed as their new chieftain when he got back home.

Impetuous and reckless, Lam-ang conquered his surrounding tribes with his battle savvy. However, this arrogance and blood-thirstiness was met by disdain by the gods, inundating his domain with endless rain. This forced Lam-ang to venture to Calanuitan to lay claim to their resources. Plans changed when he was smitten by their female chief Kannoyan.

Popular movie star JC Santos was an inspired choice to play the lead title role, making a most charismatic Lam-ang. Handsome of face and physique, Santos drew attention to him whenever he was onstage, even when his character turned to the dark side at one point. His singing voice was remained muscular and solid as he performed the numerous battle songs and love songs required of his role. He's also got the hero's moves and choreography down pat, which executed with elan, grace and strength. He was such a natural performer, such that it was a surprise to learn that this was only his first musical play.

Anna Luna matched Santos' stage presence as the mysterious Kannoyan. Even when she only came out in Act 2, Luna's Kannoyan attracted Lam-ang with her sense of compassionate leadership, as well as her ability to engage him in naughty banter. Tex Ordonez-de Leon played the story-teller Baglan. From the opening scene to the finale, her hypnotically robust singing voice would imbue the entire three-hour run of the show with haunting dramatic authority. Hazel Maranan lent regal pathos to Namongan in her role as grieving widow and protective mother. Raflesia Bravo played the amorous temptress Saridandan with uninhibited boldness.

Lance Reblando and Ybes Bagadiong played Lam-ang's pet rooster Taraok and dog Tangguob respectively, both with amazing consistency and playfulness. Alvin Maghanoy was a frisky Batang Lam-ang with his sense of adventure and duty even in his youth. With his imposing heft, Remus Villanueva gave Lam-ang's father Lokan an indelible image even after his death. Jonathan Tadioan played the village priest Tandang Guibuan, whose wisdom was blinded by his devotion to his gods. Paw Castillo made a lasting impression as Lam-ang's mentor Sumarang, who did not fear to fight for what he believed was right. 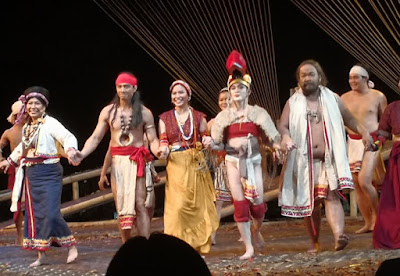 Director Fitz Bitana and Jen Darlene Torres worked on the music and lyrics that gave this show its unique brand of ethnic energy. TJ Ramos's musical direction and sound design was most impressive creating a virtual wall of sound rich with voice and percussion, enveloping the audience with an immersive yet surreal atmosphere.

The set design of co-director Marco Viana may seem simple with its three inclined ramps adorned with ropes, but the lighting of Meliton Roxas gave it a living spirit. The rousing choreography of JM Cabling made full use of the whole set in his multiple battle and travel sequences. The proud native costumes by Bonsai Cielo complete the ethno-epic tapestry.

Aside from being a proud reminder of our pre-colonial heritage, writer Eljay Castro Deldoc was even able to include subtle commentary about our country's present day culture of violence in his book. This important production deserves to be re-staged and toured around the country from hereon in for Filipinos of all generations to appreciate and embrace.

"Lam-ang" has a limited two-week run at the Little Theater of the Cultural Center of the Philippines from December 6-15, 2019. There will only be two more shows today, at 3 pm and at 8 pm.