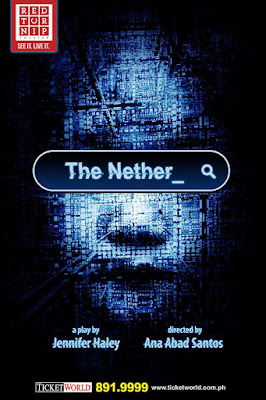 For its final production of its 4th season, the Red Turnips presents Jennifer Haley's 2015 Olivier-nominated play entitled "The Nether." This progressive theater company had always been tackling sensitive topics before like infidelity ("Closer"), homosexuality ("Cock") and depression ("Rabbit Hole") but the topic of "The Nether" absolutely pushes the boundaries of live theater to a most dangerous edge.

In the near future, the internet will have progressed into a vast network called the Nether, realms where people work, study and live out their ultimate desires in virtual anonymity. Detective Morris is investigating Mr. Sims, a wealthy man who created a realm called The Hideaway, a resort where he caters to the sexual fantasies of a most perverse clientele. The disturbing report of her undercover agent Mr. Woodnut provided the basis of her interrogation as she toed the line of ethics and morality between the cyber and real world.

Even as of now, the miracle that is the Internet is an inescapable reality in daily life. We connect to it everyday to know everything happening around us in almost real time. We use it to communicate and brainstorm with our friends and family all over the world. People are already working, studying and finding leisure on various online platforms right now.

The topic aside, as an acting vehicle, this play is a gold mine. The entire cast delivered memorable performances.

Bernardo Bernardo is a veteran actor I have seen in several movies and TV shows. However this is the first time I am seeing him act on stage. His Mr. Sims was so arrogant and his online character of Papa was so slimy. The way he was portrayed by Bernardo, we were able to see where he is coming from, yet we still hate him as he made our blood boil in both roles. Bodjie Pascua, I had seen in several plays before, but this is the first time I am seeing him perform in English. His Doyle, a teacher relegated by circumstance to becoming the anonymous voice behind a sexual fantasy, is a very pathetic character, and Pascua just inhabits him so well. Just seeing these two acting giants together is already worth the price of admission.

Jenny Jamora is fierce and fearless as Morris. Her petite, waif-like stature was quite a contrast against the formidable heights and bulks of Bernardo and Pascua. But in her slinky black leather outfit, Jamora stood her ground during her bold confrontation scenes with those two big men.  TJ Trinidad played agent Woodnut with delicacy and care, we can feel his palpable discomfort from afar. His was not an easy role to play as he was the one actually playing out the sick fantasy albeit under the guise of investigation, very very discomfiting to watch.

The presence of an actual young girl in the center of all of this depravity more than doubled the discomfort factor of this play. Cherubic child actress Junyka Santarin played little Iris so innocently, delightfully and vibrantly (hard to believe this is only her first play!), such that the disturbing nature of the situation was even made more reprehensible. Delicate-looking child actress Alba Berenguer-Testa (from "Annie" and other musicals, in her first straight play) alternates as Iris. I trust that these children have been guided accordingly by their parents and director Ana Abad-Santos about the sensitive nature of their roles.

Congratulations to director Ms. Abad Santos for a very brave undertaking achieved with remarkable sensitivity. The eerie lights of John Batalla, the airy soundscape of Teresa Barrozo and the opulent Victorian set (with its stone steps and gargoyles) of Ed Lacson all contributed essential sci-fi elements to complete the illusion of a decadent virtual world of the Nether. 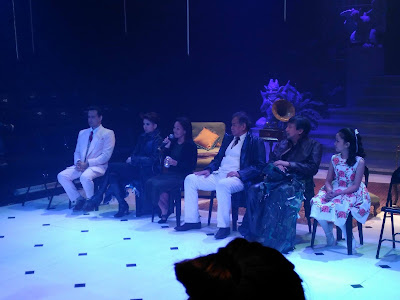 
We have seen this taboo topic in question tackled in various films and tv shows, even on tv news, and it undeniably disturbs us. Honestly, seeing this perversity unfold live onstage was an unnerving experience. There is no skin exposed, mind you, but the actual touching and hugging we saw up there certainly made my skin crawl and sent uncomfortable shivers up and down my spine. This play is art which will provoke all sorts of agitated emotions. This is NOT an easy play to watch. You can't just sit back and relax. Are you up for this? Is "conservative" Manila ready for this?