Review of UP Dulaang Laboratoryo's MAKINAL: Woes of a Woman 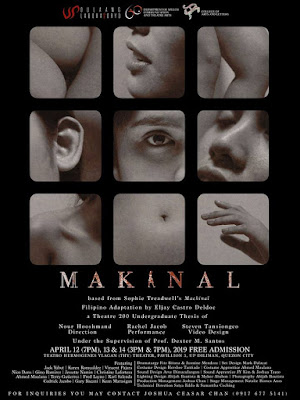 This play was second of a series of seven plays which will serve as thesis productions for graduating theater arts students. "Machinal" was a play written by American playwright Sophie Treadwell and had its Broadway debut back in 1928. For this particular production, Treadwell's script had been translated into Filipino by Eljay Castro Deldoc. It will serve as the thesis of Theater 200 students: Nour Hooshmand (for direction), Rachel Jacob (for performance), and Steven Tansiongco (for video design), under the supervision of Prof. Dexter M. Santos.

Helen was a harassed secretary at work and an unappreciated daughter at home. Desperate to get out of her situation, she agreed to marry her wealthy boss, Mr. George Jimenez, despite being totally repulsed by his presence and his touch. After an unwanted baby and a steamy one-night-stand, Helen stood at a crossroads in her life, not knowing how to get out of the prison built around her.

At the beginning of the play, it was emphasized that this play was about this one woman (bravely played with mad wide-eyed fervor by Rachel Jacob), and she could actually be any woman. From there, the whole play was divided into eight episodes in the life of this woman, namely: Business, Home, Honeymoon, Maternal, Prohibited, Intimate, Domestic and the Law. I did not hear the name Helen mentioned until the final episode already. It was a powerful statement that this tragedy could happen to any woman.

In the first episode, we hear the cacophony at her workplace as her vicious fellow employees were all ganging up on her when they felt that she was the favorite of their boss (first of multiple roles played by Jack Yabut). The next scene with her mother (an ear-splitting Karen Romualdez) was a shouted exchange of words where each one was not actually listening to the other. Seeing her daily hell as set up in these two first scenes, we already feel the inner turmoil boiling inside this woman and clearly see why she was going out of her mind. 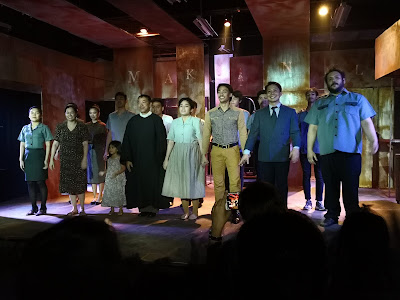 The Cast at their Curtain Call

We all saw and felt how dirty, disgusted and resistant she was during her honeymoon night with her new husband. Then later in stark contrast, we saw how calm, happy and relaxed she was when she was intimate with this other man Arturo (a very confident Kevin Vincent Pajara), whom she just met for the first time in a bistro. The shift of her facial expression and personality were so drastic, she felt like two different women. However, it was clear that we were still watching the same one woman.

Director Nour Hooshmand was very sure in her vision on how she wanted Helen's story told. The backdrop, ceiling and sides of the set designed by Marc Dalacat looked like slabs of cold copper. It felt like an inescapable metallic box in which our young woman was trapped. On these were placed multiple LCD screens where the video graphic designs of Steven Tansiongco also set the time period and the mood of the scenes. This claustrophobic set effectively created a stifling mechanical milieu that could overwhelm the weak of heart and constitution, like poor Helen. 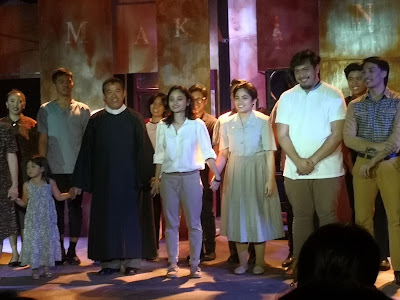 I was surprised to learn after the show that this play was written way back in the late 1920s, even before the Great Depression on Wall Street. These hellish situations that Helen experienced still exists now among the women of today. It is disturbing to realize that the story about this young woman is as current now as Sophie Treadwell wrote back then, as if no Women's Liberation Movement ever happened in between.

So, Treadwell's words from her very first scene were indeed prophetic. This IS a story about any woman, but maybe Treadwell never foresaw that this statement was going to be a timeless truth to this day, Or then again, maybe she did.

MAKINAL played for only 5 performances from April 12-14, 2019, 7 pm with 3 pm matinees on Saturday and Sunday. The shows were for free, but a bag was passed around after the show for donations since this was a students production.  The venue was at the Teatro Hermogenes Ylagan in Pavilion 3 of Palma Hall. This was the first time I had been in this black box style theater, fashioned from one of the labs of the old Physics Pavilion as I knew it during my own days in UP Diliman. 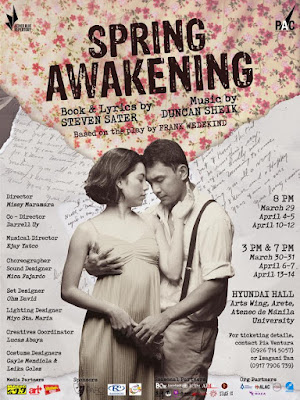 10 years ago, it was Atlantis who first brought the controversial musical "Spring Awakening" to Manila, under the direction of Chari Arespacochaga (MY REVIEW). I did not like it too much back then, mostly because I could not hear the lyrics of the songs too well where I was seated. Because of this, I did not like most of the songs too much because of the poor sound quality or unintelligible singing by some members of the cast.

This year, the Ateneo Blue Rep is restaging "Spring Awakening." Once again, there is a female director Missy Maramara at the helm. Initial reactions from the shows of the first weekend had been exuberantly positive, so I decided to catch this new staging in the hopes of renewing my appreciation for this multiple Tony Award winning musical (for Best Musical, Direction, Book, Score and Featured Actor) which I did not get the first time.

It was 1891 in a German town.  Wendla Bergmann had "blossomed" as a young woman yet her mother does not think she should know who babies are made. Melchior Gabor is radically intelligent in thought but still tended to be rash in his actions. Moritz Stiefel had been doing badly in school and his teachers do not want him to graduate to the next level. Ilse Newman was a victim of abuse in her home, so she ran away to live in a liberated artists colony. The play followed these four young people, along with their relationships with each other, their friends, teachers and parents.

The venue of this Blue Rep production was the Hyundai Hall of the beautiful new Arete building in the Ateneo de Manila campus. The entire production was only set up on the huge stage, including the audience area with chairs and floor seating areas . The actual theater seats were not used anymore as everyone was on the stage very close to the action. However, this time, the sound system was designed to fit that setup, so I was hearing the words and lyrics crystal clear.

In the matinee show I caught yesterday afternoon, the lead roles of Wendla and Melchior were played by student actors, Erika Rafael and Ian Pangilinan respectively, making them very close to the actual ages of these two characters. Rafael had a dusky radiant beauty that made her stand out from the rest of the ensemble. Her rich sensuous singing voice was clearly heard right at the beginning with her solo "Mama Who Bore Me." Pangilinan may have a magnetic presence as an actor, but his falsettos were at times not strong enough to be heard clearly through the musical accompaniment. The chemistry between them was not really an automatic click, but it eventually became more believable before Act 1 ended. (More experienced actors Krystal Kane and Sandino Martin alternate in these roles, so that should be very interesting to watch as well.)

The marked role of Moritz was played by Jason Tan Liwag. He had that angry grit in his singing voice which worked very well in songs like "The Bitch of Living," "And Then There was None" and "Don't Do Sadness." (Juancho Gabriel alternates in this role.) The supporting role of Ilse was played by Alexa Prats who had a unique powerful timbre in her singing voice, best heard in "Blue Wind" which she sang in a scene with Moritz. The role of abused child Martha was played by Sabrina Basilio, who sang solo in "The Dark I Knew So Well." The homosexual pair of Hanschen and Ernst was played by Anthony Peralta and JP Lapuz, but their featured reprise of "The Word of Your Body" in Act 2 felt oddly detached and extraneous in the narrative.

The strong underlying current of teenage rebellion and highly sexualized themes in its book and lyrics as written by Steven Sater (based on an 1891 German play of the same title by Frank Wedekind) and put to music by Duncan Sheik may not be everyone's cup of tea. At the risk of angering the show's devoted fans, it is not exactly my cup of tea to be completely frank as I realized after watching this show twice now, ten years apart.

However, this Blue Rep staging led by director Missy Maramara was undisputedly topnotch,  The ensemble work by the youthful cast was earnest and energetic. The stylized set design, featuring loosely-hatched wooden beams and wooden floors barely painted with white, was by Ohm David, enhanced by the lights of Miyo Sta. Maria. The raw musical arrangements by Ejay Yatco brought forth a heady atmosphere of teenage angst. This production of "Spring Awakening" possessed an excellent overall quality that could rival those of professional theater companies.

Ateneo Blue Rep's SPRING AWAKENING opened last March 29 and will run up to April 14, 2019 at the Hyundai Hall located inside the Arete in the Ateneo de Manila University campus. There are 8 pm shows on weekdays Wednesday to Friday, and two shows 3 pm and 7 pm on Saturdays and Sundays.