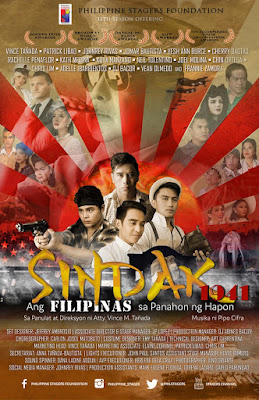 Like how last year's "Supremo Redux" was a reworking of "Bonifacio: Isang Sarsuwela," this 18th season production of the Philippine Stagers Foundation entitled "Sindak 1941" is a reworking of their 2014 musical "Filipinas 1941". The basic outline of the plot about two Filipino brothers during World War II remained intact but with some notable revisions.

Important details like the Death March, comfort women and the Hukbalahap movement were still integrated in the story. However, some historical figures who were characters in the original play like Manuel L. Quezon and Jose P. Laurel were not anymore included in this new version. Instead focus was trained only on ordinary Filipinos, their travails and their grassroots heroism to overcome adversities.

There was also a shocking major revelation of an erstwhile unknown information about US Gen. Douglas McArthur which would give his celebrated "I shall return!" promise a controversial asterisk. This critical detail was unearthed while writer Atty. Vince Tanada was doing further research into World War II topics in Japan.

The story was the two Dimaculangan brothers, Felipe and Nestor. Felipe sacrificed his own education and worked as a school janitor to send his kid brother to school. Nestor was a brilliant student who went into the shoe-making business after graduation. When Japan attacked the country in 1941, the paths of the two brothers parted ways. While one went up the mountains to become a guerrilla warrior, the other collaborated with the Japanese in order to get into their good favor.

Like in all the other major Stagers plays I had seen before, founder and moving spirit Atty. Vince Tanada was director and directed as well as lead actor. Tanada attacked the role of Felipe with his signature flamboyance and theatricality that his millennial fans eat up and love. His tenor singing voice was stronger than ever as the notes he was singing soared way above everyone else onstage. (Patrick Libao and Jomar Bautista alternate as Felipe.)

Johnrey Rivas played the rich and cocky younger brother Nestor whose efforts to keep his own family secure took him down an unpopular path. Rivas had risen up the ranks of the Stagers to lead roles as his acting and singing improved with each play and musical he joined. (Patrick Libao also alternates as Nestor.)

Vean Olmedo played Sofia, the school teacher who was Felipe's inspiration. This was a harrowing role to play, as Sophia's beauty attracted the lustful attention of a cruel Japanese officer and she was held captive and suffered much from this monstrous slavery. (Yesh Anne Burce and Kath Medina alternate as Sofia.)

Kuya Manzano played Gen. MacArthur. This was his first project with the Stagers and my first time seeing him in a role that was not a Spanish soldier or friar. (Frannie Zamora, Joel Molina and Chris Lim alternate as MacArthur. This was the role that earned Lim an Aliw Award for Best Featured Actor.) Bea Martin played the role of MacArthur's sexy blonde girl-Friday Col. Cromwell.

Adelle Ibarrientos and OJ Bacor played the whorehouse madams Mauricia and Salvacion. Chin Ortega played the demented mute street wanderer Tata Edong, who spoke clearly to us as narrator of events. The role of the child Pancho used to be the grandson of Tata Edong in the original play, but this time Pancho was the son of a guerrilla fighter Gorio. Dean Rafols played Pancho and Jomar Bautista played Gorio. Chris Lim played the sadistic Japanese officer Masanobu. 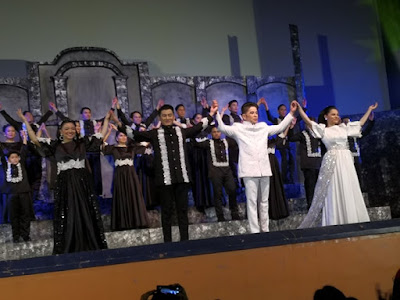 Penaflor, Rivas, Tanada and Olmedo lead the cast at the curtain call.

Like all Stagers play before this, Tanada knowingly uses an energetic and youth-oriented uniquely style of performance to drive his message home to his hard-to-please young audience who had probably never seen a play before. Every song is a big production number with cast members singing and dancing in unison in all parts of the stage. There were some jokes for comic relief and romantic scenes for "kilig" thrills. The finale is a strong patriotic statement, complete with the red, white and blue colors, yellow stars and a sun formed in the background.

The Stagers are an untiring and dedicated group of theater artists. They have been playing "Sindak" with all its difficult songs (music by Pipo Cifra and lyrics by Vince Tanada) and gut-wrenching emotions four full shows a day (a punishing 8 am, 11 am, 2 pm and 5 pm schedule) for five or more consecutive days a week. No other local theater company can boast of such a schedule.

While others may call their style unsophisticated and low-brow, this signature popular style of telling stories from history was what endeared the Stagers and their plays to the college students for whom they perform. These shows inculcate in the young audience love and loyalty for the motherland and hopefully, also ignite in them an interest in watching or even performing in theater.

"Sindak 1941" is being shown in SM North EDSA and other venues all over Metro Manila and key cities all over the country since July 2019, and will run up to March 2020. These shows can fill up the whole theater, mostly with students from an entire school. For schedule of performances. check out the Phil. Stagers website, Facebook and Twitter accounts.