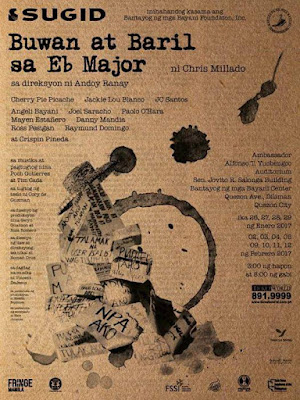 “Buwan at Baril sa E♭ Major” by Chris Millado was bravely staged in 1985 (the year before the EDSA People Power Revolution) by the Philippine Educational Theater Association (PETA) at the Rajah Sulayman Theater, Fort Santiago in Intramuros, then under the direction of Apo Chua. This year, SUGID Productions Inc. chose this same play as its maiden offering under the direction of Andoy Ranay. This show is produced in collaboration with the Bantayog ng mga Bayani Foundation, whose Center in Quezon Avenue is serving as the play's venue.

The production was divided into five chapters. The first part was about one Peasant who meets his long-estranged younger brother, a Worker, during the historic People’s March in May 1984. In the second part, a Priest presents a female Itawis Refugee (Angeli Bayani) under his care. The next chapter was about a bourgeoisie Socialite (Jackie Lou Blanco) who chats animatedly about her social awakening. The fourth part was about a Wife (Cherry Pie Picache) who speaks to the lifeless body of her NPA guerilla husband. The final episode was about a Police Officer who interrogates a Student Activist that he had arrested from a checkpoint.

Angeli Bayani's character spoke only in the Itawis dialect of Cagayan province. Some of her statements were translated into Filipino for us by the Priest (played by no less than current TV star JC Santos). However, in her raw and searing breakdown scene, we do not actually understand a word she was saying. Yet with only her tears, her scars and her plaintive voice, we still get a vivid picture of the torture her family experienced in the hands of 21 soldiers who broke into their home.

Jackie Lou Blanco was perfectly cast as Monina, an English-speaking mestiza from an upper middle-class family who actively joined protest rallies in the streets, braving tear gas and truncheons. Blanco was so lively and delightful in her monologue with her hilarious oh-so-familiar pronouncements so typical of the bourgeois class. This part was surely a guilty viewing pleasure for many in the audience, who probably actually know someone like her.

Cherry Pie Picache was very restrained in her quietly powerful monologue. The dramatically-charged subject matter of her segment could have been conventionally addressed with hysterics, but there was none of that here. Instead, Picache handled her character with subtlety and dignity as she talks with and about her dead husband. (Mayen Estanero alternates in this role.)

The low key first episode about the brothers basically served as an introduction to the historical setting of the whole play. Crispin Pineda and Reymund Domingo played the Peasant and the Worker respectively. (Danny Mandia alternates as the Worker.) final episode about the police interrogation was so brutal and unsettling, yet it was balanced by a sense of dark humor. Joel Saracho was vicious as the investigating officer, but his flashback to his own youth provided some lighter moments to diffuse the tension. Dulaang UP star Ross Pesigan played the student Arnold Mendoza with his smart-alecky charm.

The musical score (by Tim Cada, Poch Gutierrez and Vincent de Jesus) done live on cello and classical guitar was so elegant in establishing the mood. You will hear some names mentioned and repeated among the episodes to somehow connect the stories in the same general time frame. The stories in this play relive the tense period a year or so before the 1986 EDSA Revolution. For us who lived through that time, it was amazing to even imagine how a show about activism like this actually got staged during that same time. 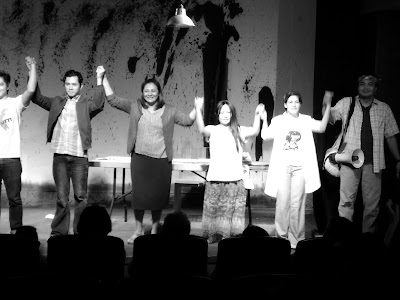 Chris Millado’s “Buwan at Baril sa E♭ Major” runs at the Ambassador Alfonso T. Yuchengco Auditorium of Bantayog ng mga Bayani Center located in Quezon Ave., Diliman, Quezon City. The schedule of performances are as follows: January 26, 27, 28, 29 (3pm and 8 pm), February 2, 3, 4, 5, 9, 10, 11, 12 (3 pm and 8 pm). A special Gala was held on February 3 at 8 pm. For ticket inquiries, please call or text Gian Viatka at 0917 845 6200. The funds raised from the performances aims to bring this production to colleges, universities and local government units in Metro Manila and the provinces.

From its press release: SUGID Productions Inc. is composed of directors, actors, designers and educators, with more than a hundred years of aggregated cultural work experience. It aims to tell the stories of our land and people, of the unheard and untold. It listen to stories of parallel communities with parallel paths – distinct stories that are relevant and responsive to our time. It means to engage peers and audiences alike, and offer spaces of conversation and participation.