Review of Rep Phils' A COMEDY OF TENORS: Doppelganger Distress 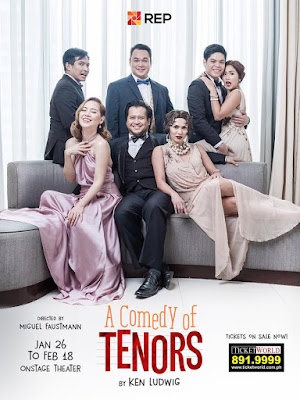 In recent years, Rep had staged a number of Ken wacky comedies written by playwright Ken Ludwig. They did "Shakespeare in Hollywood" in 2011, "Leading Ladies" in 2012, and "The Game's Afoot" (MY REVIEW) in 2016.  This year, as the opening salvo for their 81st season, Rep decides to stage yet another Ken Ludwig play. This time, it is the sequel of the first play by Ludwig that Rep did a little ways back 15 years ago.

In 2003, Repertory Philippines opened their 66th season with Ludwig's "Lend Me a Tenor". Directed by Zenaida Amador, that production starred Miguel Faustmann as famed Italian tenor Tito Merelli and Joy Virata as his wife Maria. Arnel Carrion played the harassed show producer Henry Saunders and Michael Williams played his mousy assistant Max, who turned out  to have a hidden talent. Liesl Batucan played Saunder's daughter Maggie, on whom Max had a crush. Rem Zamora played a funny fanboying hotel bellhop.

In its sequel, "A Comedy of Tenors," all those crazy characters are back in a madcap mistaken-identity comedy, as its Shakespeare-inspired title suggests. Henry Saunders had now leveled up to be producing a major opera concert in Paris, France.  Max had also leveled up, from being Saunder's assistant, then son-in-law (as Max married Maggie), and now, also a bonafide opera performer in this concert, sharing the spotlight with no less than "Il Stupendo" Tito Merelli himself.

Tito Merelli is going through some midlife crisis drama -- marital insecurity regarding his wife Maria's fidelity, parental insecurity regarding his daughter Mimi's purity, and career insecurity regarding up and coming young tenor Carlo Nucci. All these problems troubling Tito blow up in a major hullabaloo just two hours before the show was about to begin and all the well-laid plans about the concert began to unravel in a wild pace. As Henry and Max scrambled to find a replacement for Tito, they suddenly heard Beppo the bellhop belt out an aria!

I knew that Lorenz Martinez can hit those high notes from the first time I saw him as lead performer in "Lorenzo" (2013) (MY REVIEW).  However, this is the first time I heard him actually sing operatic arias, and with conviction at that. Since he played both Tito (the temperamental star) and Beppo (the loquacious bellhop) who were both opera-singing Italians with heavy accents, Martinez had to comically convince us that they were two different people, giving each character his own subtle quirks. I was amazed at how he can emerge from doors on opposite sides of the stage as different guys one scene right after the other. I can just imagine all the running he had to do backstage.

Arman Ferrer makes his debut in a comedy, and in Repertory Philippines, with this play. He is clearly the most comfortable when it comes to opera singing among the actors. You can clearly hear his classical training when he sings his arias. His comedy timing may still need a little honing compared to his co-stars, but this guy can act as well as he can sing.

Noel Rayos is really very versatile and dependable when it comes to singing, as well as outrageous comedy, as we remember him in his most memorable roles in "Walang Sugat" (MY REVIEW) and "The Producers" (MY REVIEW). Roles like Harry Saunders come so naturally for Jeremy Domingo. He could do roles like this blindfolded already. The more problems his concert had, the more stressed out Henry got, the funnier Domingo became.

Issa Litton impressed me with her performance in "Mga Ama, Mga Anak" (MY REVIEW) last year, and she was again a sexy comic standout in this one as Tito's elegant fiery wife Maria. Mica Pineda had a very daring opening scene with a mere throw pillow covering her torso. She did her loud and lively best to beef up her role as Tito's daughter, Mimi.  Shiela Valderama-Martinez played Racon, a Russian soprano diva and Tito's former one-night stand who wanted to rekindle their romance. I do hope they change the gown she was wearing because those extra folds of fabric in the front do not look flattering on her at all. 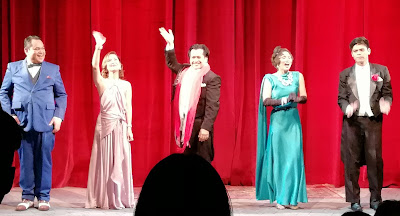 Domingo, Valderrama, Martinez, Litton and Ferrer at their curtain call

The pace of the play was snappy especially in the Act 1 which was fun and delightful. Act 2 was initially bogged down with those stretched-out Beppo soliloquies with the tongue dish. But it picks up its pace after those were over and done with, leading to a hilariously energetic climax with the two Titos and their ladies. On a side note, I hope they reconsider deleting that scene where Beppo groped Mimi's tush. The audience who was laughing out loud just earlier suddenly fell silent at that awkward scene.

Anyhow, the best thing about this play was that we treated to lead actors who were able to actually sing their operatic arias live! That rehearsal scene of the three tenors singing an aria from La Traviata (I think) was really so good.

With Miguel Faustmann in the director's chair, we get another slickly-staged over-the-top farcical comic treat that Rep does so well. The comic situations came at us fast and furiously, as well as those silly one-liners with various opera references true fans will lap up with glee. Frankly, I thought having an uncanny doppelganger was a corny plot device, but it was able to effectively bring about a merry-mix up of events as could be for the audience to be thoroughly entertained.

A COMEDY OF TENORS runs from January 26 to February 18, 2018 at the Onstage Theater in Greenbelt 1, Makati City. Show schedule is at 8 pm on Fridays and Saturdays, with 3:30 pm matinee shows on Saturdays and Sundays. Tickets cost ₱1,500 for Orchestra Center (Reserved Seating) and ₱1,200  for Orchestra Sides (Free Seating).