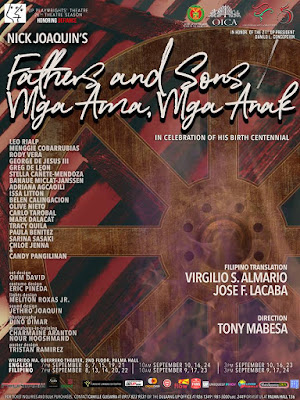 I got off work a little late this afternoon. I reached the Wilfrido Ma. Guerrero Theater a little past 3 pm already, and the play had already started. I was standing at the back first, waiting for a time when I can find myself a seat. However, director Tony Mabesa noted this old man standing there sticking out among the young kids and offered me the empty seat beside him. So that was how I got to watch this play seated beside the director himself, hearing some of his directorial commentary along the way. 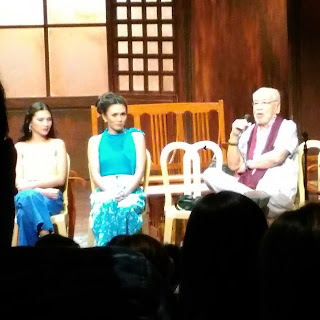 Director Tony Mabesa sharing his thoughts after show,
with Paula Benitez and Issa Litton beside him.

It was a day in the mid-1970s in a suburb just outside Manila. Zacarias Monzon was a man who rose out of poverty by running a horse-drawn carriage business. From his earnings, he was able to build himself an enormous mansion. The most remarkable piece of furniture in his house was a very long dining table which can accommodate three dozen people.

Aside from his first wife and his two surviving legitimate children Marcelo and Nena, Zacarias would go on to have many mistresses and many other children. However, when the family fortune turned to the worse and a debilitating stroke, Zacarias was left alone in his house with only Nena and his last mistress, a young prostitute named Bessie, taking care of him. His son Marcelo, now a business bigshot, never forgot nor forgave his cruel father who found pleasure in using the whip on his children.

Veteran actor Leo Rialp was playing a flawed man on the ebb of his life, yet his performance of Zacarias was vivid and strong. His naughtiness brought about by his dementia was even oddly delightful, especially in that scene when he was getting drunk with gin. There was a scene when he was repeating lines over, when you cannot tell if this was a mistake or it was in character, so realistic in his breakdown. The tattoos (henna) you see on Rialp's body was an idea of the dedicated actor himself to make him fit the look and personality of Zacarias more. (Menggie Cobarrubias alternates in this role.)

I think this is the first time I saw acclaimed playwright Rody Vera act and he was intensely passionate in his role as Marcelo. He was the character in the middle of the three generations in this play -- his father's son and his son's father -- so his was technically the central character. Reacting to the faults of his father and those of his son, this was the character who developed the most. It was his emotional explosions that ended Act I and Act II which were the most painful dramatic highlights of the whole show. (George de Jesus III and Greg de Leon alternate in this role.)

We only see the character of Sofia, Marcelo's socialite wife, in Act II, she provided that vital sparkle of humor and frankness that kept this play from wallowing in melodrama. As brilliantly played by Issa Litton with perky, almost manic, energy, she stole every scene she was in. Our attention gets drawn to her patrician beauty, her chic fashion but most importantly to her scintillating personality and shocking liberality --  a woman ahead of her time. (Adriana Agcaoili alternates in this role.)

The cheap and skanky way she was dressed, you'll think that the character of Bessie is just a comic figure at first. However, her maligned character's true heart and dignity will unfold and be revealed before the play ends. It was in these concluding scenes that Paula Benitez shone, providing the play's most tear-jerking moments. (Bessie is also played by two other young actresses Sarina Sasaki and Chloe Jenna. However the most interesting casting choice is that of Candy Pangilinan, who is more mature than her other alternates, hence will definitely give the character more depth to work with. Her age will also change the dynamics between her Bessie and the other characters.)

The dutiful sister Nena is the symbol of society's expectation of daughters -- to be the one to care for their aging parents. She never left the family home, never got married, never practiced her profession, yet to the end, she still felt like she had not offered her father her best. This self-sacrificing role was played with sincerity by Banaue Miclat-Jannsen, as her character tread the line between filial duty and personal frustration. (Stella Canete-Mendoza alternates in this role.)

Tracy Quila played the role of Chitong, the son of Marcelo and Sofia who could not make up his mind on what career he wanted to take. He quit law to become a seminarian, but the event in the play made him even more confused. (Carlo Tarobal and Mark Dalacat alternate in this role.) Olive Nieto played the humorous role of Mrs. Paulo, the nosy neighborhood nurse who had a big crush on Zacarias as she was growing up. (Belen Calingacion alternates in this role.)

The magnificent set depicting the classic all-wood interior of the Monzon mansion by Ohm David is the first thing that will strike you when you enter the theater. The lighting of Meliton Roxas Jr. provided the shadows that enhances the dramatic moods, particularly in that haunting last scene. Eric Pineda's best costumes were those stylish pieces worn by the flamboyant Sofia. Those striped bell-bottom pants worn by Chitong reminded us that this play was set in the 1970s. The sound design was done by the ever-efficient Jethro Joaquin. 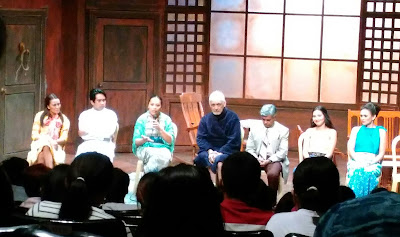 The cast members answer questions from the audience after the show.

"Fathers and Sons" was written in English by Nick Joaquin based on his own short story "Three Generations." This was in 1976, exactly the year when he was declared National Artist for Literature.  Its Filipino version "Mga Ama, Mga Anak" was translated by National Artist Virgilio Almario (Rio Alma) and Jose F. Lacaba for the PETA production in 1977 directed by National Artist Lino Brocka.

Just three years ago in February 2014, Tanghalang Pilipino restaged "Mga Ama, Mga Anak" directed by Joel Lamangan and starring Robert Arevalo as Zacarias. There was nostalgia in that TP show as Lamangan and Arevalo were in the cast of that original 1977 PETA production. Unfortunately, I was not able to watch it then. So I was glad that to learn that UPPT is going to restage it this year to mark Joaquin's birth centenary. Nick Joaquin was born Sept. 15, 1917.

Director Tony Mabesa shared he decided to complete the translation of the last few pages of Joaquin's English script (skipped in previous productions) because he wanted to clearly deliver what he thought was the essential message of the play. The political undertones of the play (remember that this was originally staged in 1977) became crystal clear and undeniable because of that fiery final scene.