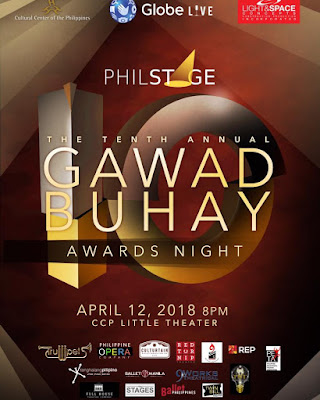 The emcees of the night were Topper Fabregas and Meann Espinosa, both on their third time as emcees of this awards show. The two had comic chemistry throughout that buoyed up energy during the length of the show. They had recurrent funny digs at the Solaire and "The Lion King" from their opening spiel up to their closing. They had an orchestra of one, Rony Fortich at the piano. He had been tasked to time the acceptance speech and start playing music once the speech reached the one minute mark as a sign to wrap it up. 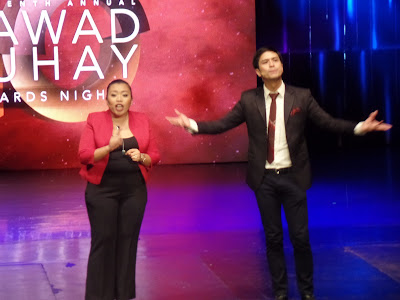 The opening number was based on Topper's frustration of not having been in a Gawad Buhay winning musical. So, there were a series of songs from various musical productions that have won over the years featuring Topper in various silly antics in many of them. These shows were: "Annie,""3 Stars and a Sun," "Grease," "Rak of Aegis", "Mabining Mandirigma," "Bluebird of Happiness," "Little Women," "Juan Tamad at ang Limang Milyong Boto," "Skin Deep," "Stageshow," "Priscilla Queen of the Desert", "Caredivas" and "La Cage Aux Folles".

Chris Millado and Celeste Legaspi present the awards to the two automatic winners of the night, each was the only nominee in their respective categories. 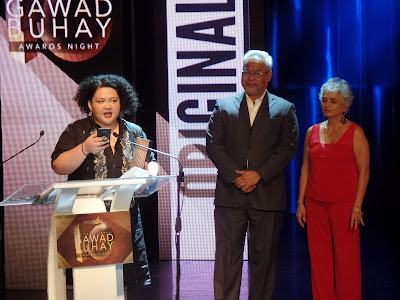 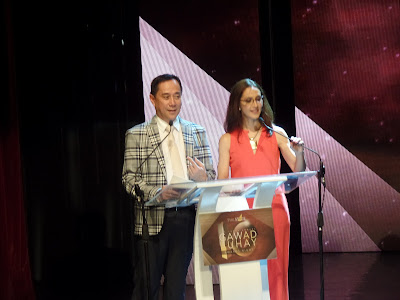 Local theater royalty Audie Gemora (in a plaid coat) and Menchu Lauchengco-Yulo presented the technical awards. The stark simplicity that was "Agnes of God" swept all its nominations in these categories.

This was followed by a song number rendered by the ensemble of "Ang Buhay ni Galileo" led by Bodjie Pascua. This was the first of the three nominees for Best Original Musical Composition which would be performed tonight.

Meann and Topper came out in tights and were hilarious in their interpretative dancing routine. Actual ballet dancers came out to "show us how it should really be done." 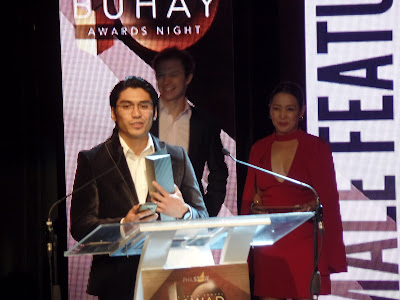 Romeo Peralta dedicated his award to his wife and three sons. 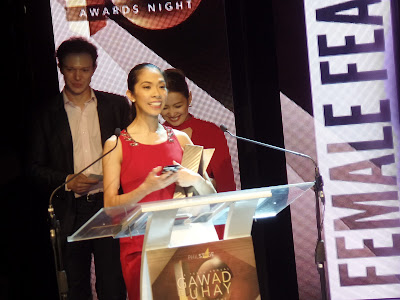 This award was received by choreographer Gerardo Francisco, whom we will see more of winning in later categories. 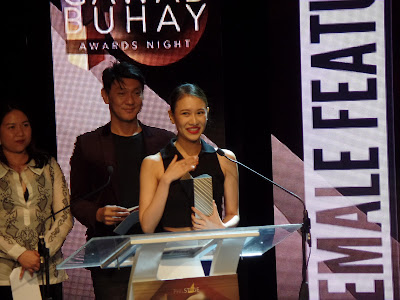 Abigail Oliveiro had such a charming British accent when she gave her speech. 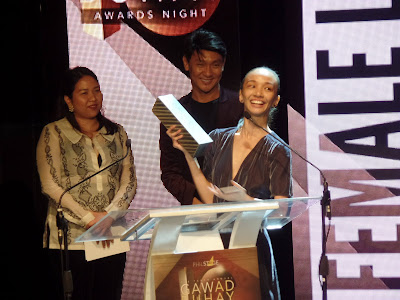 The awards for the male dancers took a long time to give out properly since Ms. Leloi made an error in the winner announcement (causing Topper to call her Faye Dunaway, LOL!). After going through all the fuss to correct the error, it turned out that San Juan was not present to receive his award.

Arman Ferrer sang one of his songs from "Maynila sa mga Kuko ng Liwanag," another nominee for outstanding musical composition.

Lisa Macuja and Toots Tolentino present the remainder of the dance awards. 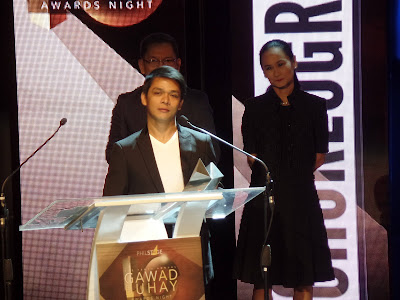 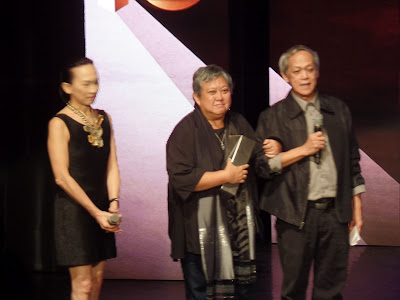 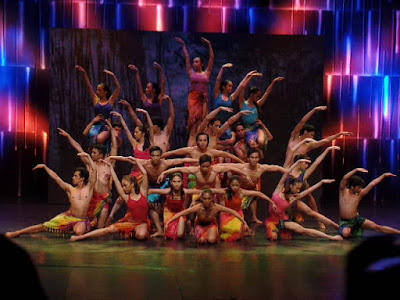 Tanghalang Pilipino's Nanding Josef and former Ballet Philippines principal dancer Cecile Sicangco present the Natatanging Gawad Buhay award to Agnes Locsin. We were shown live samples of her diverse artistry in choreography: the haunting "Arachnida" and the joyful "Magkaugnay". No speech was given, instead Ms. Locsin presented Nonie Buencamino doing a modern interpretative dance about a guy who loved taking selfies.

There was a short medley of tunes from "Chitty Chitty Bang Bang" by the ensemble led by Yanah Laurel and the four kids who played Jeremy and Jemima on the show, Albert Tilos, Noel Comia Jr., Isabelli Araneta-Elizalde and Zoe Alvaralde.

A most irrepressible (as usual) Jon Santos and Myke Salomon presented the next awards as their past characters Bernadette (from "Priscilla") and Faraj (from "Caredivas") respectively. All three winners were no shows last night. 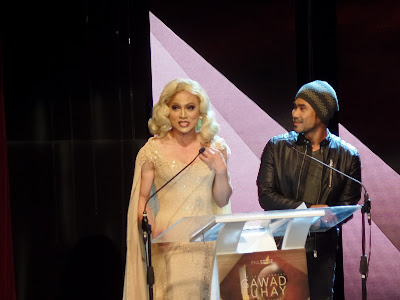 Jon Santos and Myke Salomon, a.k.a. Bernadette and Faraj

Aicelle had just left for the UK to join the touring production of "Miss Saigon" as Gigi.

Geisler's award was received by his director Chris Millado, who cited how the theater could be a tool for rehabilitation of lives.

Karla Gutierrez and Rem Zamora presented the much-anticipated acting awards for plays. These are very tightly contested categories. All the winners were in attendance last night. 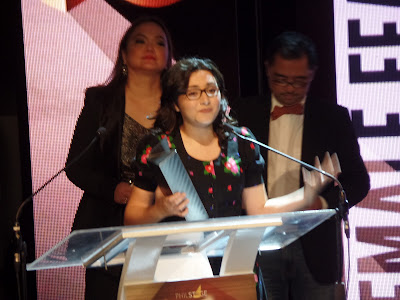 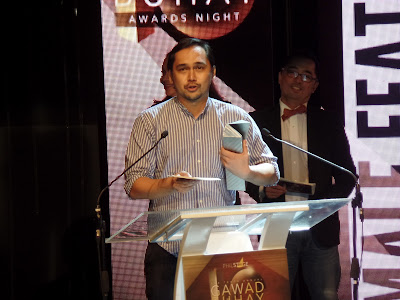 Marco Viana thanked his mother for defending him
when others question his decision to be an actor over being an engineer. 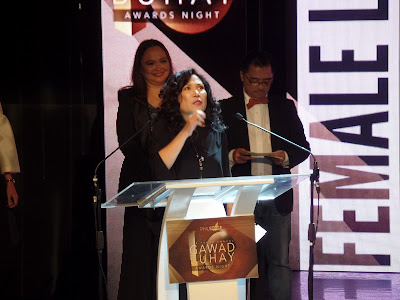 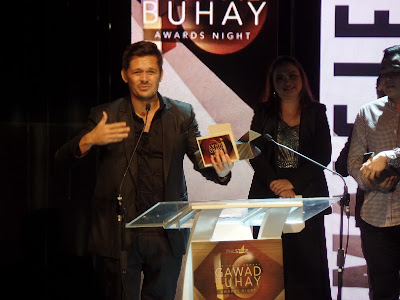 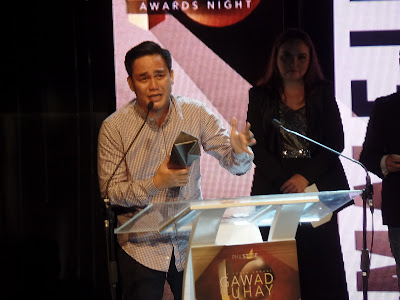 A tie! The two winners showed contrasting reactions to their wins. Spafford was so cool and collected, while Ibesate was emotional and tearful. 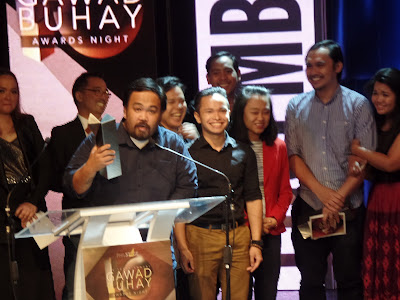 The winning ensemble of "Ang Pag-uusig"

Topper and Meann called Tads back out onstage and ribbed him for having lost his 7th straight acting nomination, saying how Baron Geisler edged him already by winning on his very first play and nomination. Tads was a great sport about it.

A short dance excerpt from "Ibong Adarna" followed, the scene depicting the fight between the three brothers, when the two elder brothers betrayed their youngest. 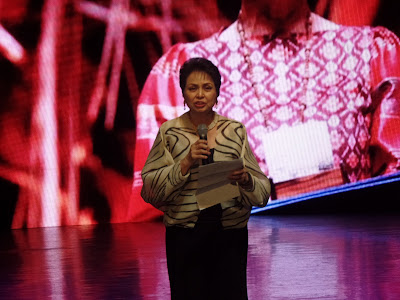 Nanding Josef and Maribel Legarda presented the night's second Natatanging Gawad award to Ms. CB Garrucho of PETA. There was a short video clip of her eloquent speech which she gave last year, when PETA was given a Ramon Magsaysay award. Ms. CB came up the stage while being serenaded by PETA talents with the wedding song from one of her past shows, "Canuplin" (1980).

An energetic tap dance number excerpt from "Newsies" followed performed by its all-male (+ one lady) ensemble led by Jef Flores, to the delight of the audience. 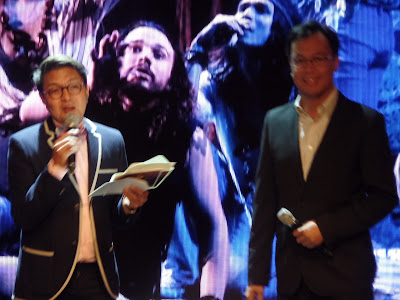 Yatco could not receive his award in person because he was at work on the final re-staging of "Sa Wakas" last night.

This was Mr. de Leon's final work with Ballet Manila before he immigrated to the US.

The In Memoriam segment was an instrumental piece played on piano and cello. The introduction was given by Joy Virata. The list of dearly departed talents this year included Bernardo Bernardo, Soxie Topacio, Mario O' Hara, Spanky Manikan and Richard Cunanan.

Jaime del Mundo and Roselyn Perez presented what could be the most exciting awards of the evening. 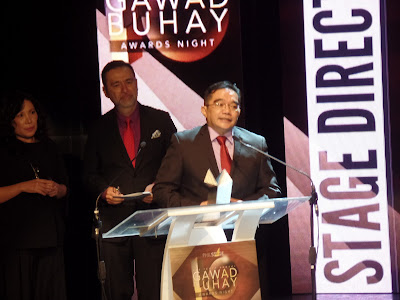 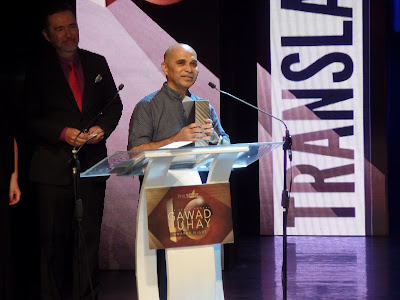 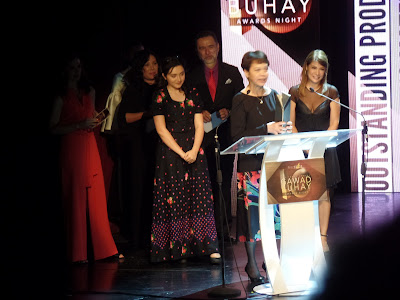 This award was received by Joy Virata, and the three actresses who were made up the ensemble of this play: Pinky Amador, Menchu Lauchengco-Yulo and Rebecca Coates.

Michael Williams and Dennis Marasigan present the final awards of the evening. And this would prove to be a sweep  of four categories by a single production. 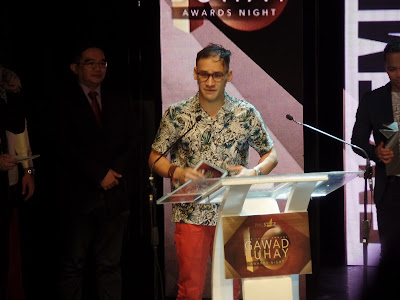 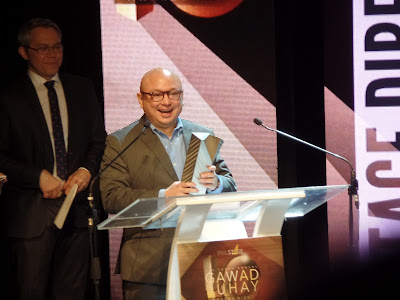 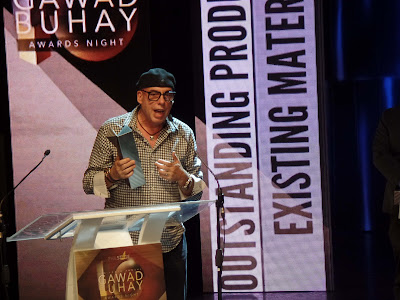 The show closed with a song specially composed for the occasion by Vincent de Jesus as performed by singers from his shows "Himala" and "Paano Ako Naging Leading Lady".