Review of Rep's ARSENIC AND OLD LACE (2018): A Charming and Chilling Comedy 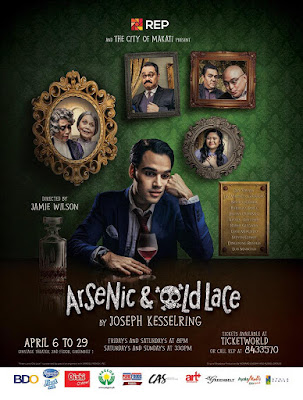 I had vague memories of watching the film version of "Arsenic and Old Lace" during one long haul plane ride a few years back. That 1944 film was directed by Frank Capra and starred Cary Grant in an oddball mix of murder and madness in an old house where two little old ladies lived. The film felt more theatrical than cinematic, never hiding its theater roots. Now I would get to watch the actual play as staged by Repertory Philippines as only they can deliver material such as this.

The elderly spinster sisters Abby and Martha Brewster lived in their ancestral home in Brooklyn with their nutty middle-aged nephew Teddy, who believed he was President Teddy Roosevelt. One night, their younger nephew Mortimer, who wrote theater reviews for the newspaper, came for a visit. He discovered a startling "charitable" activity of his aunts, which he frantically tried to cover up for. To complicate matters, another long-estranged nephew Jonathan, now a ruthless criminal, also decided to crash in that same night.

This play was written way back in 1939 by Joseph Kesserling. It was first staged on Broadway in 1941, playing more than a thousand shows until it closed in 1944. These old American plays are an automatic fit for Repertory Philippines. They simply do them so well like no other local theater company does. In fact, Rep had staged "Arsenic and Old Lace" two times before, in 1981 and 1988.

This year, Jamie Wilson takes a stab at directing this latest incarnation. Dennis Lagdameo designed the house set, which was very much part of the action. Bonsai Cielo, who just won the Gawad Buhay for her elegant Victorian-age costumes for Rep's "In the Next Room", designed the 1940s garb required in this one. John Batalla and Jethro Joaquin, both Gawad Buhay awardees for Rep's "Agnes of God", team up again for lights and sound design respectively.

Joy Virata was an automatic choice for Abby Brewster. She again proves her subtle brand of comedy for which I had long admired her for in several Rep plays in the past. Jay Valencia-Glorioso matched Ms. Virata's sense of wit every step of the way. As a pair, they were quaintly cute and delightful, even if they do what they do to those poor lonely gentlemen guests.

Nelsito Gomez was back in Rep playing someone much lighter than those two intense characters he played last year to critical acclaim. His disparaging lines as critical Mortimer Brewster about the theater were hilarious. Jeremy Domingo can really play these dimwitted characters like Teddy Brewster like it was second-nature for him to do so. He is so convincing in his delusions. Apollo "Sheikh" Abraham struck an sinister vibe the moment he set foot on stage as Jonathan Brewster. He did not really look like Karloff's iconic Frankenstein monster, but he sure was one scary-looking dude.

Barbara Jance was perky and liberated as the pastor's daughter Elaine who was not going to let Mortimer get away from her that easily. Robbie Guevara had that diabolical plastic surgeon character of Dr. Einstein down pat and crazy. Steven Conde came in only in the last act as pesky police Officer O'Hara who annoyed people by telling the long-winded plot of the play he was writing. Gabe Mercado played two roles, that of Elaine's father the Rev. Dr. Harper, and later the police Lt. Rooney, both stern and very opinionated characters.

The first act where the macabre premise of the play was being set up was rather slow, uneven, and may feel as stodgy and stuffy as those elderly characters on the stage. There were a lot of dated references to events current to the time the play was written, like the political and war climate or the quality of theater shows. The references to American personalities like Teddy Roosevelt (and his charge up San Juan Hill) or Boris Karloff may also prove head-scratching for many younger audiences.

However after the intermission, the whole madcap mixed-up mayhem simmered steadily into an entertaining boil by the third act. By then, the audiences were already so at home with the eccentric Brewsters, their silly neighbors (especially the policemen!) and the whole absurd black yet comic situations they got themselves into such that the laughs came more freely and easily, up to the end. Being a old-fashioned black comedy may be hard to sell, but those who enjoy a little twisted humor in their theater plays will definitely enjoy this one. 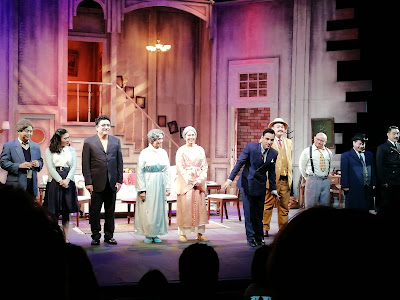 "Arsenic and Old Lace" runs from April 6 - 29, 2018 at the Onstage Theater in Greenbelt 1, Makati. Show times are at 8 pm on Fridays and Saturdays, with 3:30 pm matinees on Saturdays and Sundays. Ticket prices at P 1,500 for Orchestra Center (reserved) and P 1,200 for Orchestra Sides (free seating).