"D' Wonder Twins of Boac" is the last offering of PETA for its 45th theater season. Writer Rody Vera adapted Shakespeare's "Twelfth Night" and transported the story to the Philippine movie industry of the late 1960s when the film studio system was already on the decline.  I found that a very interesting concept, and furthermore, it will star one of my favorite stage actresses Cris Villonco in the lead.  This was most certainly a must-watch for me. 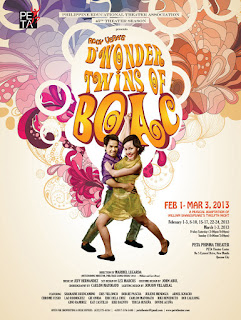 Viola (Cris Villonco) and Bastian (Chrome Cosio) are the titular twins from Boac, who were a talented song and dance duo.  On their way to try their luck in the movie industry in Manila, their ship capsizes and the two were separated when they were lost at sea.  We later see Viola in Manila as a sampaguita vendor. When she hears that Campanilla Pictures were holding an audition for an Elvis movie, she gets the idea to dress as a boy named Cesar to try her luck.

The owner of Campanilla Pictures, Don Orsino (Lex Marcos), wants to propose marriage to the recently-widowed Donya Olivia (Shamaine Centenera-Buencamino) of rival BLV Pictures, in order to unite their two studios.  He sends Cesar to be his emissary to Olivia. However, fate has it that Olivia actually takes a fancy to fair Cesar, not knowing that "he" was actually a girl in disguise.  By this time, Viola/Cesar was already falling in love with Don Orsino!

On the other hand, unknown to Viola, Bastian had long been in training as a movie stuntman, so it was inevitable that the twins' paths will cross one day.  However, how will Bastian figure in this already complicated love triangle entangled in a web-like comedy of errors that his cross-dressing sister is now involved in?

This whole absurd situation is hilarious as you can imagine.  The comedy worked back in Shakespeare's time and it works up to now.  The director Maribel Legarda, fresh from her directorial successes in other PETA hit shows "William" and "Care Divas," injected a lot more Pinoy comic touches to tickle the young audiences whom this play targets.  The theater was full-packed to the rafters with high school and college students and they were really howling with laughter in many scenes.

I have never seen Cris Villonco in a role like Viola before.  She was quite "cute" as Cesar.  Of course, she did not really look like a real man, but she looked like she was having a lot of fun doing it.  Her songs were  in a more pop voice and style, rather than the trilling soprano we are more used to hearing her sing in her previous shows like "Walang Sugat" and "Noli Me Tangere." Those scenes of Doc Orsino and Direk Luciano (Roi Calilong) teaching Cesar how to seduce a woman was very laugh-out-loud funny, as with that scene where Donya Olivia turns the tables on Cesar seducing moves.

Chrome Cosio's role as Bastian was not as extensive as Viola's.  His memorable highlight were those scenes with his stunts trainer, the sneaky Antonio (Riki Benedicto), that really brought the house down with laughter!  Chrome was not shy in showing off his physique, to the delight of the high school girls in the audience.  However, since he was showing his body off several times from the first song number to the last, it did look a little too repetitive, thus losing its novelty factor.

This is my first time to see the acclaimed Shamaine Centenera live in action.  She was very fierce, funny and fearless as Dona Olivia.  She had a near wardrobe malfunction during the show I watched, but she survived it with aplomb.  Lex Marcos was debonair as Doc Orsino, but also very funny. I cannot imagine his alternate, the older Bodjie Pascua, to be better fit as Orsino than Lex.

A side plot involved Luciano, a low-brow director of masses-oriented "bakya" movies, and his nemesis Malvolio, who is a snobbish director of quality serious films.  The conflict between these two directors was also very interesting as it was funny.  The Malvolio character took time to warm up to the audience though, as played by Lao Rodriguez.  The supporting characters of Olivia's drunken Uncle Toma (Gie Onida), her foolish suitor Rudy Castelvi (Eric V. dela Cruz) and her secretary Maria (Kat Castillo) also had their funny moments.

The whole play worked out quite rollickingly fun. Well, that is, until the ending when they tried to inject something of a historical perspective as to what happens next in Philippine cinema.  In my opinion, it did not really end the show too well, as it felt like a totally different play.  There was that one moment when the audience fell silent also, so I think maybe they did not get it too.  This is only the first weekend though, and maybe they still tweak the execution of that scene a little in the coming shows.  In any case, after that momentary hiccup, the play recovered when the final song number came on and enlivened the stage again. 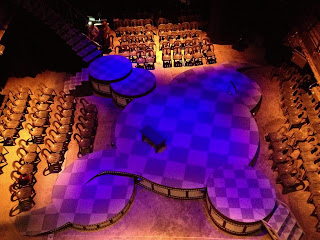 When I entered the auditorium and took my seat, the first thing I noted was that the old stage was not there.  Instead there was a beautiful multi-tiered stage with a staircase going up to the balcony on one side.  There were now seats all around this stage.  This new stage made everything more exciting.

Congratulations to PETA, Ms. Maribel Legarda, Mr. Rody Vera and the cast and crew of "D' Wonder Twins of Boac" for this most innovative and originally envisioned Shakespearean play I have seen, after "King Lear" also by PETA just a couple of years ago.  May you continue to succeed in your mission to bring to the Filipino youth original interpretations of the Philippines' and the world's best literature!