I completed Level 350 of Candy Crush Saga last week.  And since then, I have not played anymore.  Now, who is calling me an addict?  Haha!   I have looked back at this game, and why it was so hard to resist. 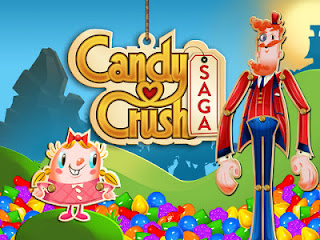 Who are these characters anyway?  Never cared to know their names...


Sometime in March this year, my kids downloaded this new game on the iPad called Candy Crush, that was supposed to be very popular.  It looked like "Bejeweled," but with yellow, red, purple, blue and green candy pieces, with that hypnotic music playing (which I dislike, so I always play on silent mode).  When I checked it out and tried the game myself, it turns out it was not really that new anymore.  Because this game was connected to Facebook, I was very surprised to see a LOT of my FB friends already right in the thick of their Candy Crush adventures. Seeing your own progress vis a vis your friends gives this game an additional challenge.

If you do not want to part with any money, which includes me, you need to connect with FB to progress as starting from level 30, there are points where you need to obtain tickets from your FB friends in order to board a train or a plane to get to the next levels.

I reached Level 350 without having to spend a single cent on lives, on special powers, or what.  Nor did I have to turn back the clock of my tablet (as many true CC addicts do) to fool the app to giving me a fresh set of five lives.  I just play with lives that CC provide for free and the lives that my friends send to me.

The first few levels were pretty easy.  Just form those trios, fours and fives in a row, and get points.  At first, it was just clearing the jellies.  Later on, these jellies got thicker and thicker, they needed to be hit so four to five times before they get cleared.  We get to have other challenges, like bringing down the ingredients, namely cherries and acorns.  Make sure they are in a column with an arrow at the bottom, and do not trap them in shoulders.

Striped candy is formed when you align four in a row.  It can have horizontal or vertical stripes depending on how the direction of the last candy to complete the four.  The direction of the stripes determine the direction of the sweeping power of this candy.  If you complete a letter L or T with same color candy, this forms a Wrapped candy.  When these explode, they clear a nine square area around it.  combine five candies in a row and it forms those multi-colored chocolate balls, which we in the family, called "Buchi" (because they looked like one).  When you switch a Buchi with a regular candy, all the candy of that color on the board are cleared.

These special candies can also be switched with each other.  A Stripe-Stripe combo sweeps in cross directions.  A Stripe-Wrapped combo sweeps three layers in an up and down cross.  A wrapped to wrapped combo, now that is spectacular, as it produces a 9x9 square big explosion.  A Buchi-Wrapped combo makes all the candy of that color into wrapped and explodes accordingly.  A Buchi-Stripe combo is very useful since all candy of that color become stripes, then sweeps in many directions.  Of course, a Buchi-Buchi combination is the most special because it can clear out ALL the candy of all colors on the board.

In the much higher levels, there is another special candy shaped like fish.  When you clear such, it releases three fish that  eat isolated jelly squares.  If you are lucky, these would be the jellies you left at the corners. 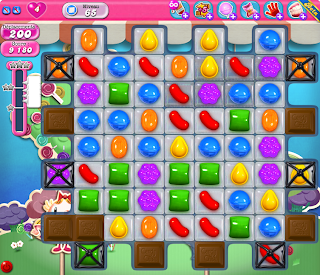 It would be easier to fulfill these tasks if there were no pesky obstacles, but what game does not have them?

A relatively easy obstacle are those black coils.  They can be switched with anything, and seems innocent at first.  You can see this and feel their effect in higher levels when entire columns of black coils block the sweeping powers of striped candies.

When you go beyond level 50, you will meet and HATE chocolate!  These things multiply so quickly and stay that way unless you can clear candy beside them.  Later you will see that if you clear all the chocolate, they are cleared for good.  Well, that is until those higher levels when there would be chocolate churning machines.

Even more irritating than the chocolate are those bombs!  These bombs indicate numbers on them, sometimes as high as 20, but many times as low as 3.  This number counts down every move you make, and you should clear the bomb with a same color combo before it reaches zero.  Or else, the bomb explodes, and the game ends right there and then.  Like chocolate, there would also be bomb churning machines in certain levels.  You would waste many moves just trying to clear the bombs, and not fulfilling your orders; not to mention you can still have plenty of lives left at that point.

There are many levels which you can clear in a single try.  Yes, even beyond 200 or 300.  Mostly though, you waste a life or two to figure out what this level is trying to make you do.  But then again there are those terror levels which stymies even the most serious of addicts.  It is true what they say, this game is purely out of luck, luck of what the next candies it will give you.  Yet, the sense of achievement after passing each level, especially the hard ones, is so indescribably satisfying.  Many times, you cannot help but elatedly shout "Sugar Crush!" when you see that phrase flash on the screen after a particularly challenging level. 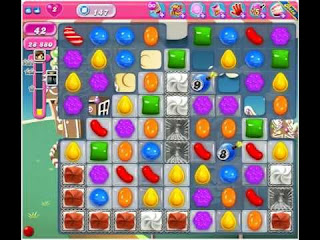 The level where I spent the most time was that darned Level 147.  I spent a whopping 3 weeks before I conquered that monster which was supposed to be a simple "clear the jelly" type, but the combos that would make you destroy the thick multi-layer jellies at the bottom just would not materialize.  I also had a hard time at Level 165, 167, and 305, spending about a week each in those levels before passing.  There are surely others, but these are the stumpers I remember the most.

I sometimes feel that the game knows when you are already frustrated and planning to quit.  Because just when you least expect it, you will get your elusive Sugar Crush, and you continue!  Especially if you see a friend gaining on you or passing your level!

The first level most people have difficulty with is Level 65.  I do not really remember that it was memorably bad for me, but a LOT of my friends have been stuck there for so long, such that this was the level where Candy Crush drove them crazy enough to quit.  I have helped a couple of FB friends out in completing this challenging level.

And then, there is the super easy Level 252, where you simply need to get 30,000 in 30 seconds.  However, they give us a lot of "+5" candies which give you a 5 second extension in time. I got a whopping 1.2 MILLION points.  My son was more patient than me, played the level again for me, and got an even more whopping 3.1 MILLION points!

OK, so now I am at Level 351 and have not been playing anymore for five days today.  There are only two FB friends ahead of me, and they are doctors, one dermatologist and one pediatrician.  You draw your own conclusion from that.  Another doctor is trapped back at 350 after two weeks, but maybe he has passed it by now, I haven't checked.  Let's just see. I am not closing my book completely on this saga.  Who knows, when I see many friends gaining on me at Level 350, I may again have interest to continue the game.  But for now, I have decided to simply stop.