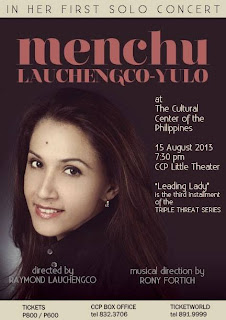 Menchu Lauchengco-Yulo  is no doubt the First Lady of Philippine Theater now and maybe throughout my twenty years or so of being a fan of local theater.  I find it very amazing that this concert "Leading Lady" is only her FIRST solo concert, and she only had it now at the ripe age of 50!

This concert is the third and final installment of the "Triple Threat" series of monthly one-night-only concerts at the CCP Little Theater featuring theater stalwarts who could sing, dance and act.  Last June, the first show starred Nonie Buencamino.  The second show last July was all about Audie Gemora.  Sadly, I was not able to see both of those shows due to schedule conflicts.  I almost missed this concert too, but luckily the stars intervened in my favor.

The stage had a piano at left, and a bunch of props on the right behind a folding divider. Behind the piano, the stage had so many lights set up.  I was imagining now this concert was going to be lit by those lights, and beautifully it was.

Ms. Menchu entered the stage wearing a black sleeveless one-piece pantsuit, with only earrings and necklace as accessories.  Nothing too fancy.  She first talked about her love for the theater, the butterfles in her stomach, and how she wanted to connect with her audience, from the front row to the back.  With Mr. Rony Fortich at the piano, she launched into her first song "You There in the Back Row" from the show 13 Days to Broadway.

She followed that up with "Everything's Coming Up Roses" form Gypsy and "On a Clear Day You Can See Forever" from the musical of the same title. 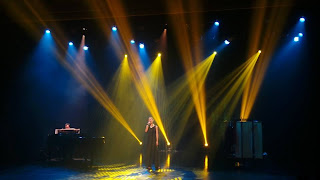 After that she talked about her first audition for Repertory Philippines The King and I back when she was 15.  She did not get a role then, though her brother Raymond (then 12, now her director for this show) did.  But this show ignited her passion for musical theater.

She began in ingenue roles, and had a funny spiel talking about all the shawls she had to learn to act with.  She then sang a series of ingenue songs, like "I Feel Pretty" from West Side Story, "Sixteen Going on Seventeen" from The Sound of Music and "Green Finch and Linnet Bird" from Sweeney Todd.  She's still got that sparkling soprano lilt in her, even though she confesses she has not sung any of those songs for years.

Then she talked about her transition to more mature songs, getting to sing songs like "Don't Rain on My Parade" from Funny Girl, then "I Dreamed a Dream" from Les Miserables, ending the series with "Don't Cry for Me Argentina" from Evita.  She was not only singing these songs, she was in full character.

After this, she talked about singing mature love songs as a leading lady, then she segued into a medley of "As Long as He Needs Me" (from Oliver!) and "My Man" (from Funny Girl).  She also sang "Stars and the Moon" from Songs for a New World.  She was bathed in blue lights during this song which she described as a song with "all the emotions written into it."  Beautiful rendition. 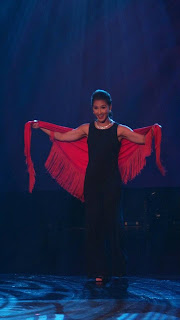 She then talked about how she found it difficult to make people laugh in comedies.  She followed that spiel with a different yet still amazing performance like I don't think I have ever seen her do before.  The song is "(Not) Getting Married" from Company.  That wonderful song was a true show-stopper.  Ms. Menchu was so vibrant and funny in that song marked with very fast delivery of very tongue twisting lyrics.  Guest singer Teenee Chan and even the pianist Mr. Fortich sang support for this song.

The next song was "Send in the Clowns" (from A Little Night Music).  So much emotion and drama in this inherently dramatic song.  After this, she talked about her dream to play Elphaba in Wicked, then, as green lights played around her, sang a heartfelt "The Wizard and I."

She introduced her next song calling it the most beautiful song she has heard.  To the surprise of the audience, she sang a song in Filipino. It was "Magbalik Ka Na Mahal" from Rama Hari by Ryan Cayabyab. She confesses that her Filipino was not too good.  However, after hearing

her rendition of that love ballad, you wouldn't believe it to be true.

The next song is "Meadowlark" from The Baker's Wife.  I know the song, and I knew Ms. Menchu has sung it.  But I never knew how powerful this song could be before.  Ms. Menchu really owned this song. This was THE highlight among many highlights of the show.

The final song in her official programme was "Colors of My Life" from Barnum.  And the lights on stage burst into multiple colors as the song was describing.  Certainly sums up her most colorful life as a theater actress. 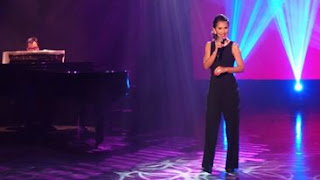 Of course, the audience will not let her go simply after that.  She acquiesced by serenading us with a song from Passion called "Loving You."  I was waiting for her to sing this, and was so happy she actually did. She mixed in the song "Not a Day Goes By" (from Merrily We Walk Along), and mash-up was seamless.

For a final encore, she toasted us with her water glass (which miraculously did not run out through the length of the show despite her frequent sips) and the song "Ladies Who Lunch" from Company.  She was charmingly fierce in her rendition.

So there goes the very successful first solo concert of Ms. Menchu Lauchengco-Yulo.  I feel so fortunate to have been one of those who have witnessed her grand solo concert debut.  Life begins at 50 indeed, especially for a talented trooper like Ms. Menchu.  We already knew she would be so good, yet she even surpassed all our expectations.  So many good things still remain to be discovered in her already illustrious career in theater in the years to come.  And we will all be there to watch and cheer her from our seats as she regales us on the stage.