Recap of DO YOU HEAR THE PEOPLE SING? Manila: Timeless Boubil and Schonberg Songbook 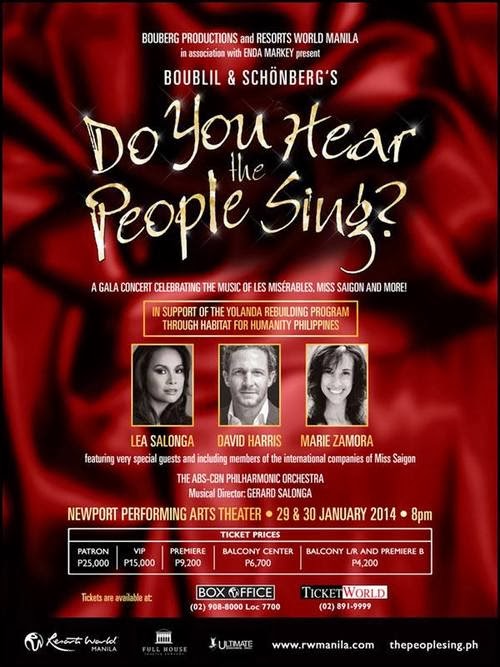 "Do You Hear the People Sing?" is a touring musical production featuring various international  musical theater luminaries singing classic songs written by the acclaimed pair of Alain Boublil and Claude Michel Schonberg.  This show made its debut staging in Indianapolis in 2011, and has been touring ever since.  Manila had its turn to host this show January 29 and 30, 2014 at the Newport Performing Arts Theater at Resorts World Manila.

This was expensive affair with cheapest balcony tickets costing almost P5000 each, going all the way up to P25,000 each for Patron seats.  However, the underlying heart of this show is that it was a benefit show aiming to raise P24M to build 200 houses for the victims of Typhoon Yolanda in Tacloban care of Habitat for Humanity.  All the artists who sing and perform on stage will donate their time and talent for this noble endeavor, as the appreciative audience donate their price of their ticket. 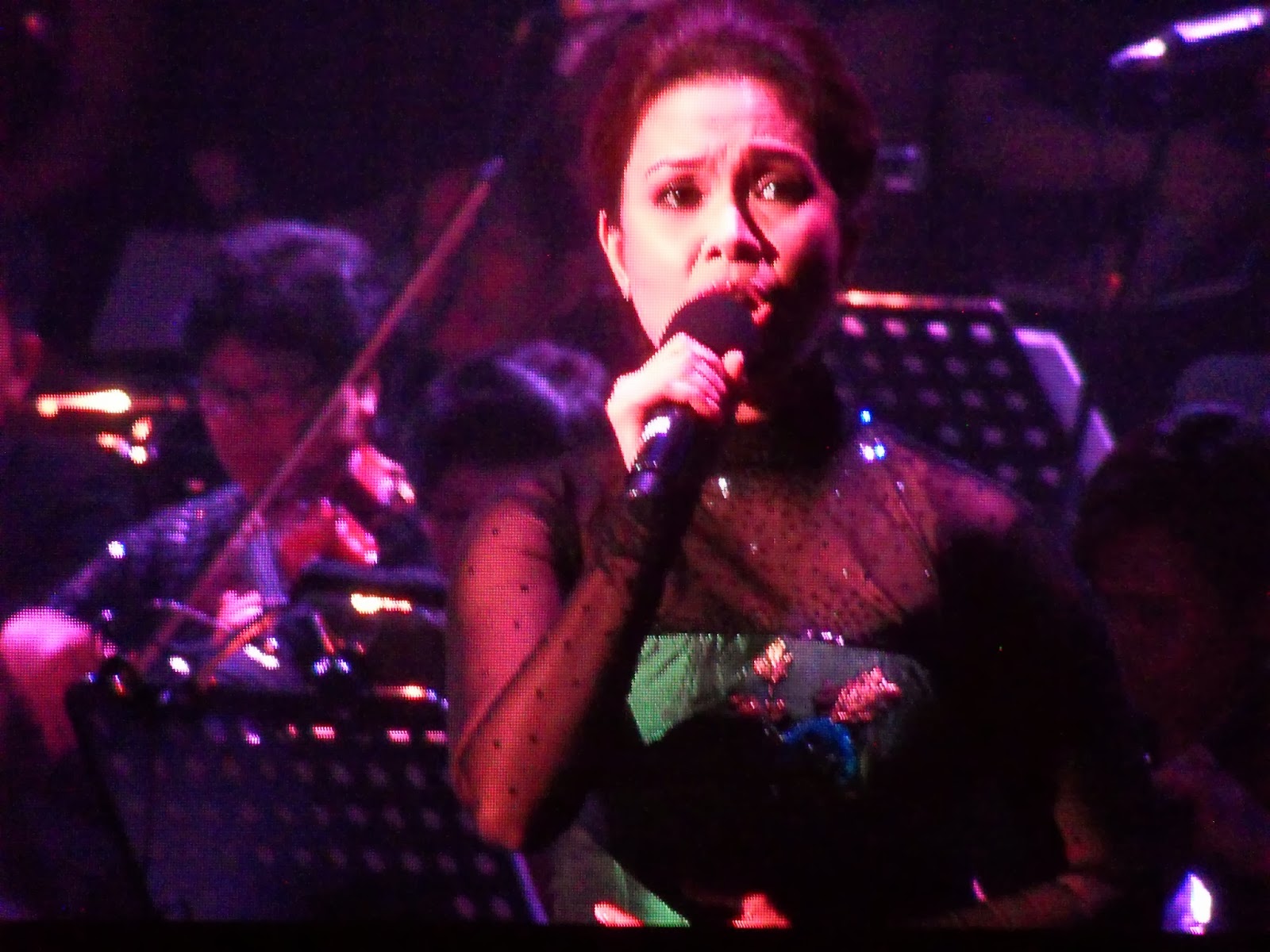 The show started when the curtain rose on Gerard Salonga conducting the ABS-CBN Philharmonic Orchestra onstage, playing an overture with familiar tunes from Ms. Saigon. Behind them were two rows of choir singers.  The first song number is already a showstopper in itself, Jon Joven singing the rousing "Bui Doi". Jon hit the ball right out of the park right away with his powerful rendition of the song which opened Act 2 of Ms. Saigon.

After he sang, Jon was joined onstage by guest foreign artist, Australian David Harris.  They told us the story behind the birth of Ms. Saigon.  This was followed by a performance of "The Heat is On in Saigon" by a collection of theater artists called Ms. Saigon Ensemble. I recognized Robbie Guevara and Jake Macapagal among them.  Macapagal nervously stumbled as he introduced the next performer, none other than Ms. Lea Salonga herself.

Ms. Lea came onstage in a red gown and started to sing a series of songs from Ms. Saigon, starting with "I'd Give My Life for You" which was flawless.  After talking about her experiences as a naive 17 year-old struggling with the requisite bed scenes, Lea sang "Last Night of the World," with the dapper David Harris singing the role of Chris.  Harris' voice was so high and soaring. This duet ended in a passionate kiss which surprised the audience.
Next up was "I Still Believe".  We get to hear the new lyrics to be debuted in the upcoming 2014 revival, though personally I preferred the old words.  Playing the role of Ellen was Carla Guevara-Laforteza, who was breathtaking.  Not that I'm complaining, but I wonder why it was not Menchu Lauchengco who sang with Lea for this song?

The final song in the Ms. Saigon set is "The American Dream" sung by no less than Mr. Leo Tavarro Valdez, who had actually played the Engineer on London.  After he floored us with his flexible vocals and physical comedy skills in this hilariously sleazy performance, he was joined by Lea and they introduced the next set and singer. 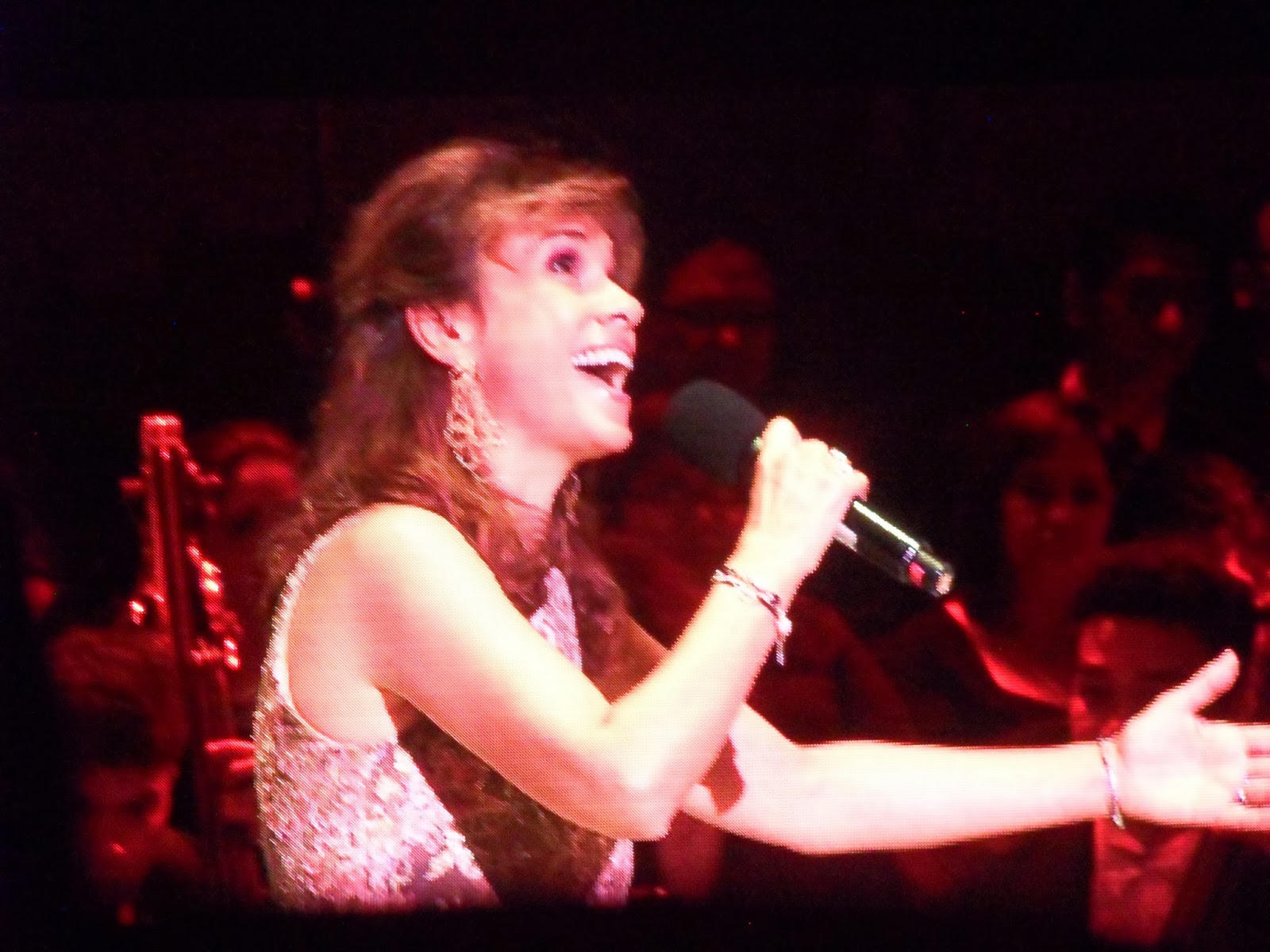 The other foreign guest artist was French soprano Marie Zamora. Her first song for the night was actually in French, "Au Petit Martin" from Boublil and Schonberg's first production La Revolution Francaise.

This unfamiliar song would be followed by more unfamiliar songs from another less known show called "Martin Guerre."  The performances of these serious songs though were memorably first-rate.  Jed Madela unexpectedly gave an impassioned and intense performance of the title song.  David and Marie joined up to sing the love song "Live with Somebody You Love" which also ended with a passionate kiss."  Then Lea joined them onstage to sing "The Land of the Fathers."

The next set of songs have been songs which had been deleted or retooled from various shows.  Marie sang Colette's song "I Saw Him Once" from Les Miserables, which was dropped because the play was already too long, though I seem to have heard this song already before.  Then Lea sang "Too Much for One Heart" which was dropped from Ms. Saigon and rewritten as "Please."  I have heard Lea sing this song before in one of her concerts.  Lea introduced Rachelle Ann Go who stirringly sang a new song for the character of Ellen, "Maybe."

Lea then joined Rachelle onstage and they belted out a pop version of "I Dreamed a Dream" which sounded amazing.  After this duet, the rest of the company joined the two on stage and they all sang "This is the Hour" which closed the first act. 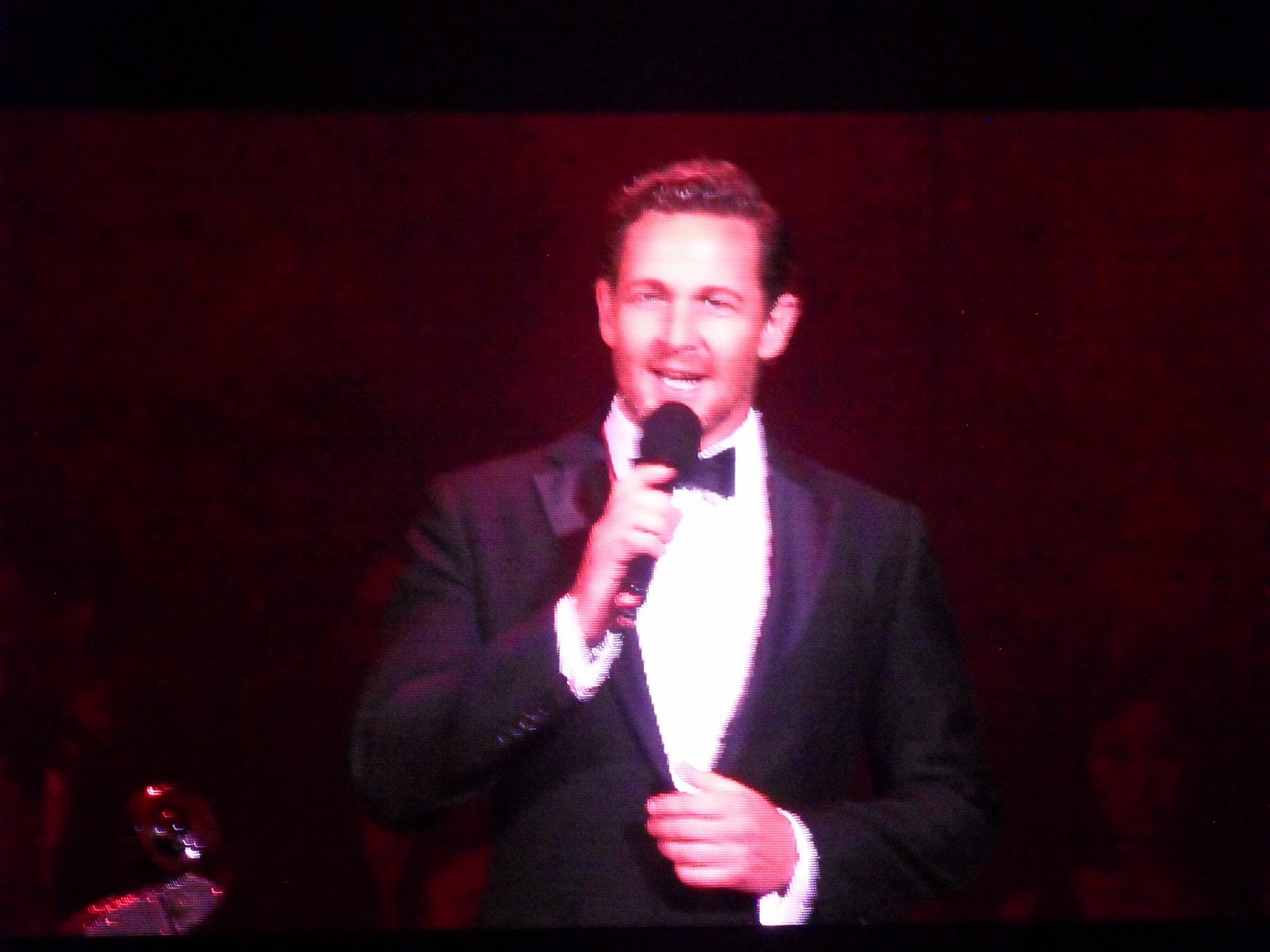 After the 20 minute intermission, the orchestra began to play an unfamiliar Irish-sounding sprightly tune. That turned out to be from the latest Boublil and Schonberg show Pirate Queen.  Carla Guevara again came out playing the title role of Grace O'Malley singing "Woman".  She blew us away with her strong voice and portrayal.  David came out again and sang "If I Said I Loved You" with Carla, which again ended with a passionate kiss, which had the audience tittering with the recurrent inside joke.

The audience clapped with anticipation as the French tricolor appeared on the video backdrop and the Orchestra played the Les Miserables Overture.  The first song would be the first song written for the show, "On My Own."  Marie sang the original French version "Mon Histoire" and Lea joined her with the English version.  The Ensemble followed with "At the End of the Day."  Leo "Understatement" Valdez and Menchu Lauchengco-Yulo played the Thernadiers performing the very funny and irreverent "Master of the House."  I have to say I was disappointed that this was Ms. Menchu's only solo spot in the whole show.

What followed were all my favorite songs from Les Miz.  For the beautifully haunting medley of "In My Life" and "A Heart Full of Love," the love triangle was played by the night's three main soloists: David, Marie and Lea. There were a couple of obvious mic glitches at this part but negligible. The Javert ballad "Stars" was sung by Michael Williams.  "Empty Chairs at Empty Tables" was heartbreakingly sung by David Harris.

David then segued into "Bring Him Home."  Surprisingly he was joined onstage by Michael Williams.  Then with the next verse, Cocoy Laurel (who played Jean Valjean in the Manila production of Les Miz) came out and sang.  Cocoy looked awkwardly dwarfed singing beside the tall David, but he still held his own.  Jon Joven sang the punishing final verses before all four sang together to end the song.  Amazing number.

Everybody else came out onstage. The powerful drama of seeing and hearing "One Day More" sung live never gets old, and it was the same here tonight.  This final song ended in a spray of golden confetti and the audience rose for a much-deserved standing ovation. 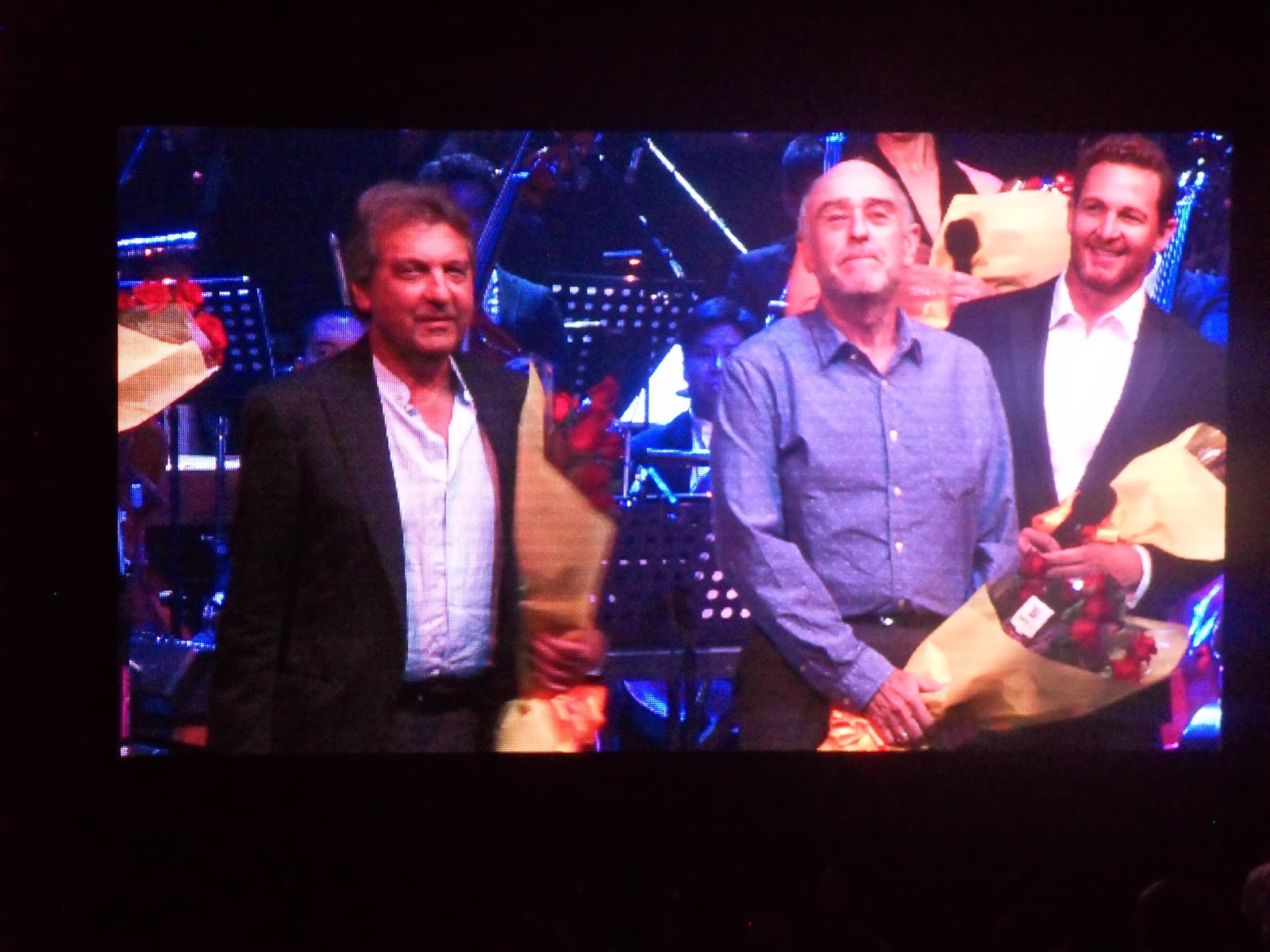 The audience was in for a surprise because the main men Claude Michel Schonberg and Alain Boublil themselves took to the stage and addressed the audience with their special messages of thanks.  These were very touching words indeed.  Everybody onstage then closed the show with the concert title song "Do You Hear the People Sing?"  And with that, this night of thrill- and goosebumps-inducing music and singing for a good cause came to an end.  The exhilaration we felt after the show was unbelievable!