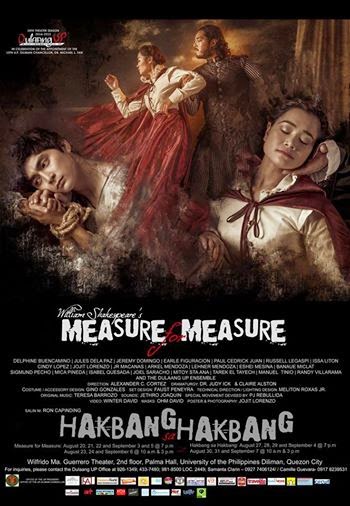 A Shakespeare play is always a challenge to watch because of its intricate language and plotting, but it really pays off with satisfaction after the show. I am not familiar with this play entitled "Measure for Measure," which is currently being staged by Dulaang UP. I was very curious to go see this uncommonly staged Shakespearean play.  However, because of schedule limitations I was only able to watch during the second weekend of its three week limited run. The shows shown that week had another challenge for its audience, the Shakespearean verses had been translated into Filipino!  Now that is quite a way to end Buwan ng Wika, isn't it?

From the beginning, admittedly the story of this play was not the easiest to get if you have not read any synopsis about it.  Slowly but surely though you will get into its drift.  This play was set in Vienna. Duke Vincentio leaves for abroad leaving his deputy Angelo in charge of the city. A nobleman Claudio gets his young girlfriend Julieta pregnant out of wedlock. Angelo charged them with fornication, and mercilessly metes a death sentence to Claudio for this offense.

Claudio's friend Lucio visits Claudio's sister Isabella in the abbey where she is a novice nun and convinces her to appeal for her brother's life. Angelo is seized with lust by Isabella's wit and beauty and offers her an indecent proposal, Claudio's life for her virtue. Isabella discusses her dilemma with a mysterious hooded friar Lodowick, who was in fact Duke Vincentio in disguise.

You will really be fascinated with the way the cast delivered its kilometric lines (65% in verse!) in tongue-twisting classical Filipino, as meticulously translated by Ron Capinding. The title alone is a challenge in translation. I probably would have translated "Measure for Measure" with the more literal "Sukat sa Sukat," rather than "Hakbang sa Hakbang". This required a deeper understanding of the play's underlying message. It was funny how Capinding translated the name of the brothel manager Mistress Overdone among many other sexual double-entendres into crisp irreverent Filipino.

Mitoy Sta. Ana was practically on stage the whole time as the Duke and his alter-ego, the Monk. He may at times be fumbling with his complex long monologues or settling into a dry singsong rhythmic delivery at times, but his characterization was no less impressive for such a difficult role. I want to see theater veteran Jeremy Domingo slay this Duke Vincentio character in the English version.

As the virtuous novice Isabella, Delphine Buencamino was simply riveting. In that scene where she was lawyering for her brother in front of Angelo, she aced those difficult lines. Her monologue as she was contemplating on her dilemma was also very demading as it vacillates from wanting to save her brother to saving her virtue. Up to her last moment, which is a puzzling silent answer to a question by the Duke, Buencamino was haunting and elegant. (Cindy Lopez plays this role in the English version.)

This is already the third Shakespearean play by Director Alexander Cortez after "Macbeth" and "Richard III". This play is traditionally called a comedy, but there is a heavy dramatic conflict that lies therein which makes the director's job of balancing these two aspects a definite challenge. Director Cortez succeeds in telling this complex story with both effectivity and artistry.

The stylized costumes of Gino Gonzales with those white and ecru overcoats and robes and wacky blond wigs and head gear. The commanding two-tiered set with imposing walls and a grand banister as well a dungeon underneath was a creation of Faust Peneyra.  Meliton Roxas, Jr. was responsible for the precise technical direction and lights. Teresa Barrozo incorporated a music design which highlighted some comic moments with silent movie-like sound effects. The talented artistic staff deserve accolades for the illusion of 15th century Viennese opulence their effects created on the limited stage space.