Recap of ST. LUKE'S AT 111: THE CONCERT: From a Performer's View 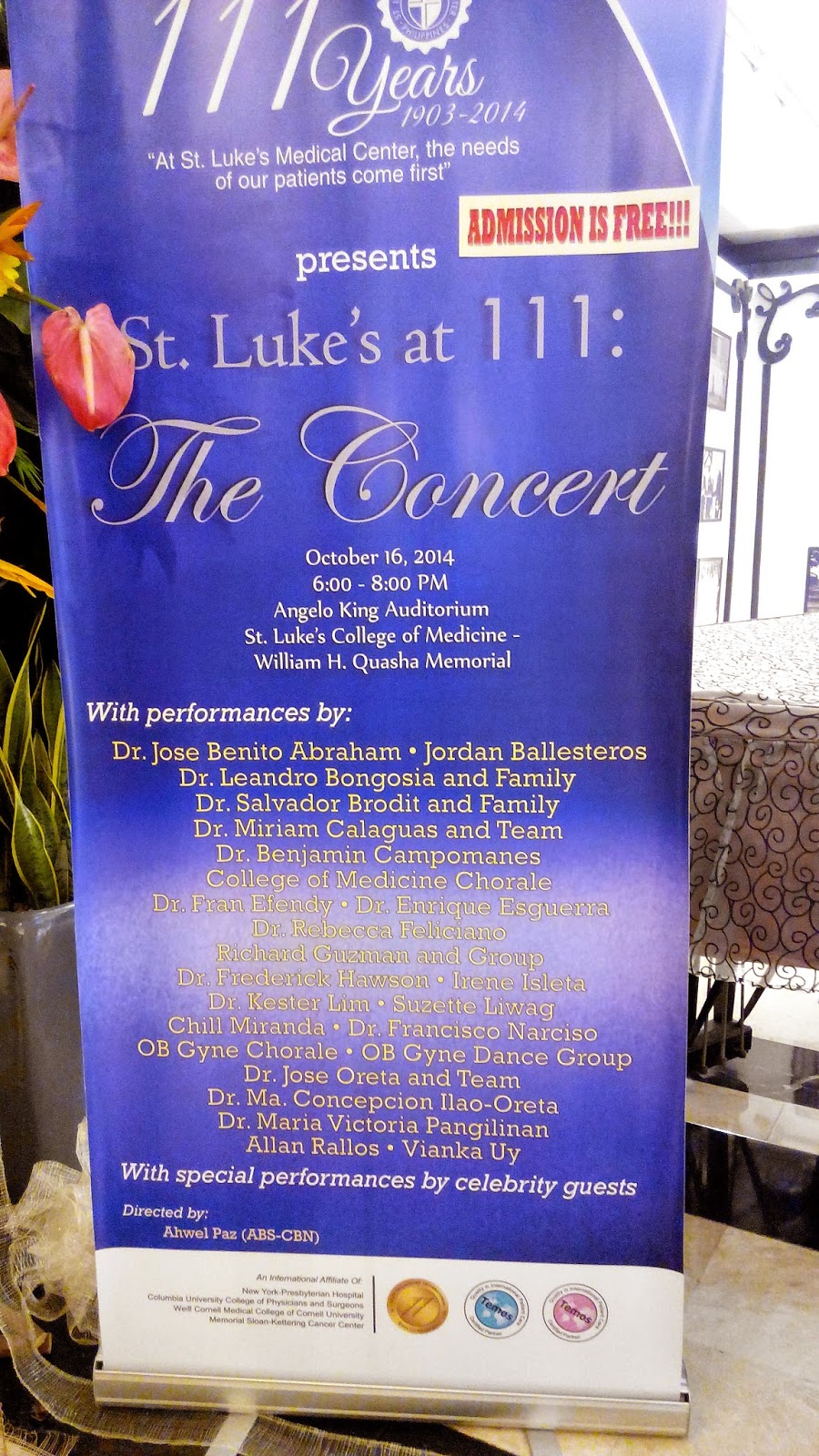 This year, St. Luke's Medical Center is celebrating its 111th year of existence in delivering world-class healthcare to the Filipino people. Like previous years, this is a whirlwind week-long celebration.

October 13 was Big Night at the Crossroads along Mother Ignacia. This was a night when various departments of the hospital come up with their best production numbers in quest for the big prize. October 14 was Doctor's Night at the EDSA Shang Hotel. This was a night of fellowship for the medical staff, marked by ballroom dancing, a raffle with big prizes and a retro performance by the 70s OPM band, the Boyfriends. Tonight is the annual Bingo night for the SLMC Family, with a car as the first prize.

Last night October 16, there was a big concert held at the auditorium of the St. Luke's College of Medicine also to commemorate the anniversary. This was also on simultaneous live broadcast to BGC for them to watch and join the festivities.

Last month, I received the invitation letter to be one of the performers in this concert, as a soloist and as a member of TOSD (our Lettermen-inspired singing group led by Dr. Jose Oreta). Therefore, this post will mostly be a behind-the-scenes recap of how this concert came about, than about the concert itself. We would be receiving regular reminders from the hsopital staff in charge of the show, Sir Mon Portes and Ms. Yvette Lansangan. 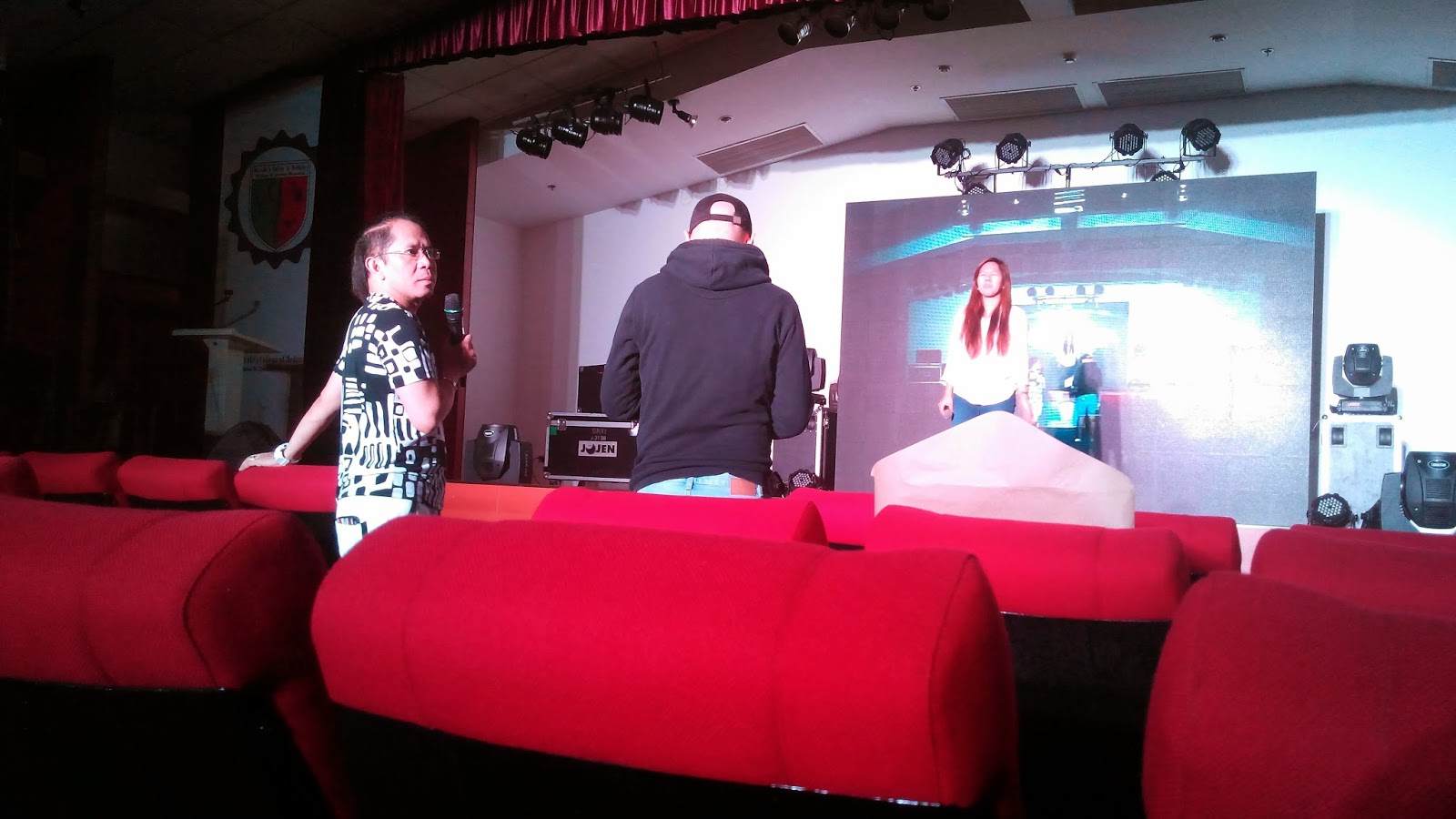 The first organizational meeting was held last October 2 only. We met our director, Ahwel Paz, whom I knew of as a radio personality on DZMM. We found out then that this was no ordinary concert they were planning. It was not a simple "one song after the other" type of concerts we had before. They had a concept of making it a variety show with the songs split across five genres -- retro, OPM, jazz, pop-rock-R&B and Broadway -- all in medley formats. Needless to say, we doctors were all apprehensive about this complex plan, which we have never experienced before.

Our first rehearsal was on October 11 only, just five days before D-Day. Of course, we are dealing with doctors, nurses and staff who are working in the hospital. It was difficult to expect complete attendance, even if the rehearsal schedules were split up for each genre medley. Even on the second rehearsal on the afternoon of October 13 or even the technical rehearsals on the day itself October 16, attendance was never complete. We never really saw everyone who will be performing yet. So it will all just come to complete fruition come performance proper only.

It was very interesting to see how productions of live shows like this go on behind the scenes -- the microphones, the sound quality, the blocking, the props, the lights, the videos and the waiting time in between so that the director gets what he likes perfectly done. Direk Ahwel led us all in a fervent prayer after the final tech rehearsal, and his final advice was to just have fun.

It was about 6;30 pm, our voice-over announcer Jesse Andal (Nursing Manager in QC) announced the beginning of the show.  The night began with a short pre-show with Dr. Miriam Calaguas (Radiation Oncology) playing "La Vie En Rose" on piano, accompanied by an accordionist. Her guest rad-onco from Spain, Dr. Felipe Calvo, sang a Spanish love song while playing what else but a Spanish guitar. 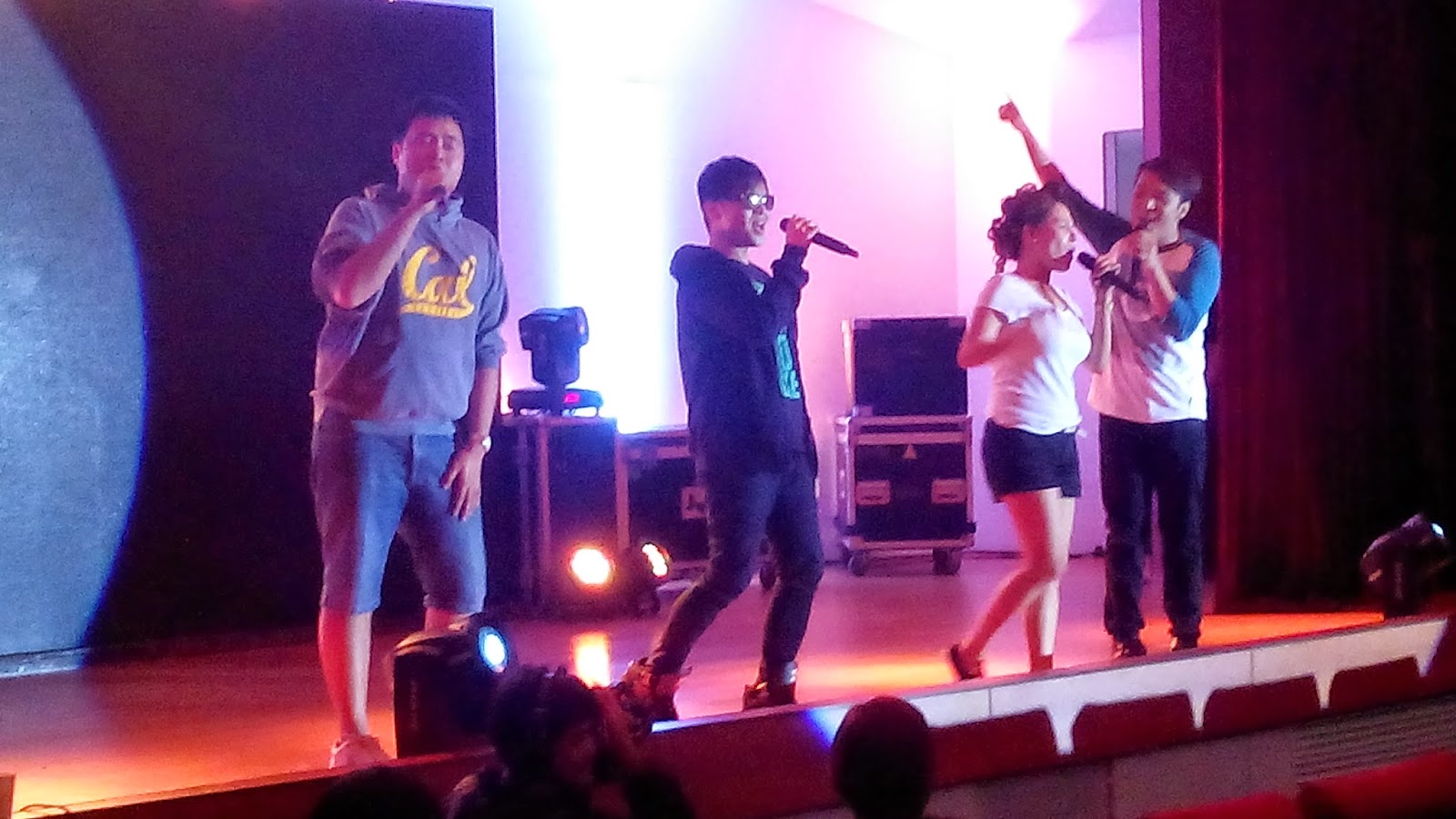 Marc Mabasa and company at the rehearsals.

The official Opening Number was kicked off by some professional singers from singing competitions here and abroad. They sang current hits like "Titanium," "Wiggle" and "Rude" (VIDEO) among others. This group was led by Mark Mabasa, one of the contestants from X-Factor. Mabasa was quite the livewire performer with great vocal range and had a Daniel Padilla look about him for his female fans. His companions were karaoke champions, and they were also very good belters, which of course remains to be the standard of good singing in contests here. They all had their turn to wow us with their belting prowess (with a twist of comedy) in their rendition of Beyonce's "Listen."

By this time, all of us included in the first segment called "50s-90s" were already herded backstage. After the emcees -- Dr. Henry Esguerra (GS) and Ms. Yayo Aguila -- gave their opening spiels, we were onstage sitting in our designated spots. First up was Drs. Lee and Arlene Bongosia (Cardio and ENT-HNS) with their talented children singing "Chattanooga Choo Choo." Our TOSD -- Dr. Oreta (GS), Dr. Bongosia, Dr. Louie Llido (GS), Dr. Bobby Ramos (Rad Onco), Dr. Epoy Maranan (Neuro) and myself -- took over to sing "Goin' Out of My Head/Can't Take My Eyes Off You" Lettermen medley. After this, I stepped forward to render Matt Monro's "From Russia with Love" solo. Those were my first two songs done right there. 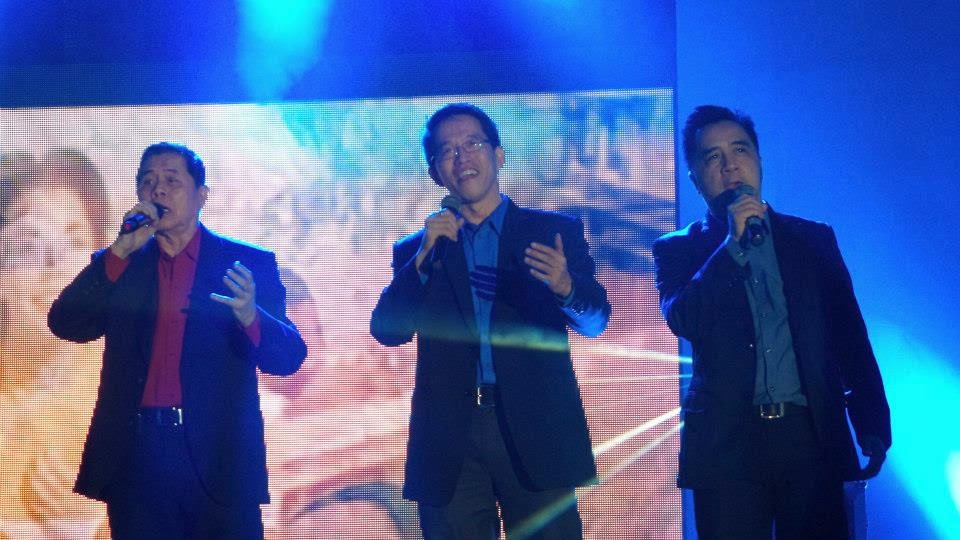 Thank you Dr. Epoy Maranan for this picture of  our half of TOSD in action.

From there, the medley segued to Dr. Joben Abraham (Urology) and his saxophone as he played the Wham tune "Careless Whisper". This was followed by Dr. Esguerra on a velvety version of Eric Benet's "The Last Time". Ms. Irene Isleta (Manager of HR in QC) delivered her take on "Used to Be" and "Gone Too Soon." The set concluded with Dr. Abraham playing "Nothing's Gonna Change My Love for You" later joined in at the chorus by all of the singers onstage.

Next was the OPM segment, and TOSD was part of this one as well, we got back up onstage to our new designated spot. Dr. Oreta had to make a quick change to his Barong Tagalog to sing his flirtatious "Titingin-tingin" medley with his lovely wife Dr. Ching Ilao-Oreta. TOSD then sang our version of the kundiman "Ikaw" with our spanking new choreography which was only whipped up last Monday. That was my third song done. 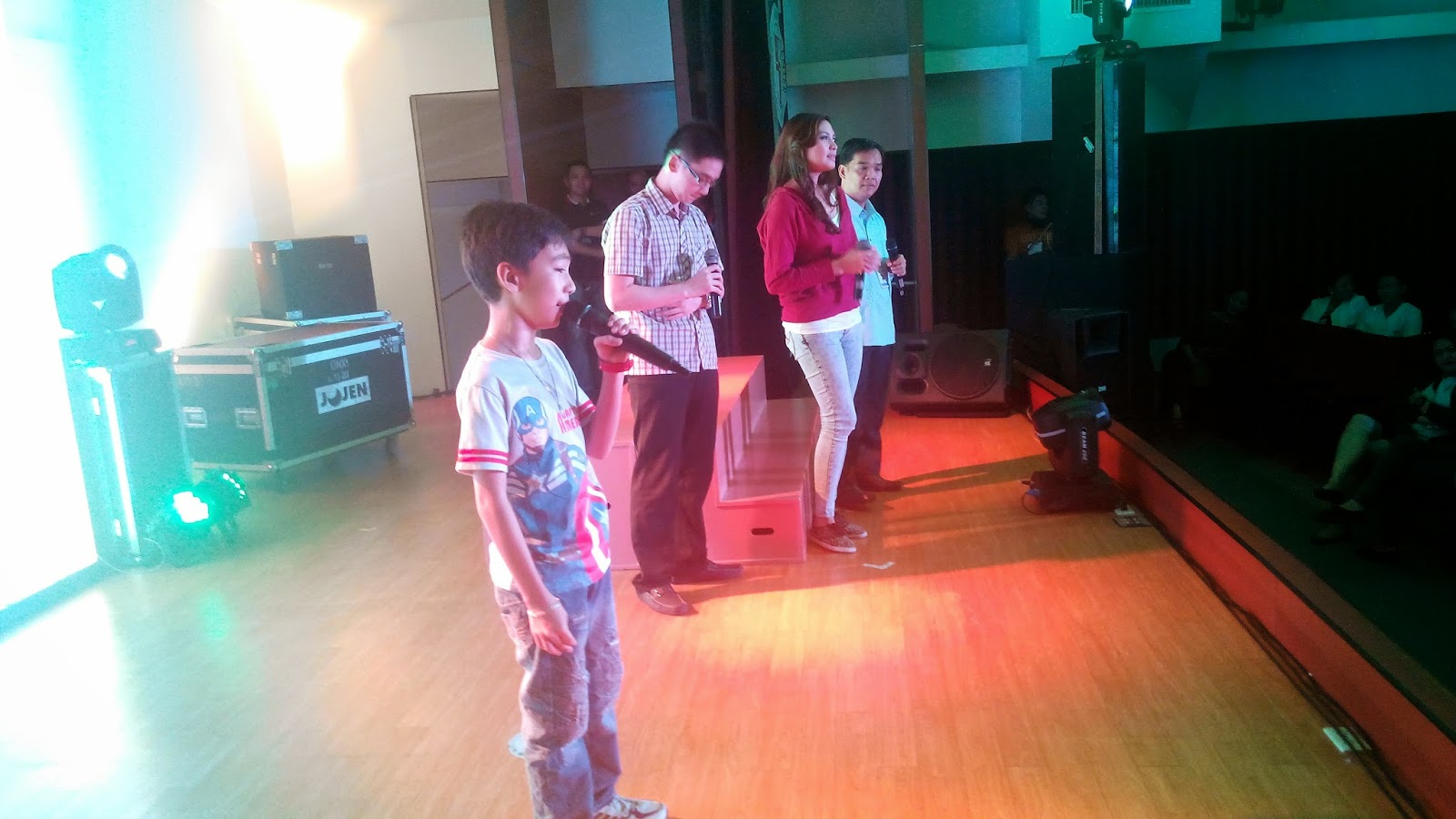 Earl already earned our admiration for his singing during the rehearsals.

Mr. Allan Rallos (Manager of Pathology in QC) earned a lot of female fans last night with his stirring renditions of Martin Nievera's "Ikaw" and Wency Cornejo's "Hanggang." We heard more female fans screaming as Dr. Fran Efendy (a Neurology resident from Indonesia) sang a smooth-as-silk version of Side A's "Forevermore." Chill Miranda (Ambulatory Care nurse in QC) lived up to her name by singing a cool version of "Power of Two". (I know that song is by the Indigo Girls so I am not sure why it was in this OPM segment.) As the finale, Earl Manalo, better known as "KBL" in the last The Voice Kids contest, regaled all of us with his belting prowess with Regine Velasquez's "Dadalhin."

The next segment is the Latin-Jazz segment, the only segment where I am not included in the line-up. So this was the only time I got to sneak into the audience to watch the performances and take videos. First up was Dr. Salvador Brodit (Pain Management) and his wife singing "Say Something." This was originally planned as an acapella number with the whole family, but this final version is just a passionate duet by husband and wife that ended with a kiss.  Dr. Efendy again delighted his female fans with his version of Michael Buble's "Everything" (VIDEO), even inviting them to sing along with him. I never knew Vicky Pangilinan of the legendary Music and Magic was a dentist in St. Luke's! She was so good as she glided through her rendition of "Someone to Watch Over Me." Finally, Dr. Abraham took to his sax again for "Besame Mucho" with Dr. Ching Oreta in fiery red, dancing a steamy tango with our choreographer.


Next up is the Pop-Rock-R&B segment, which had an elaborate concept we never really saw completely in rehearsal. It started with an acapella version of Pink's "Just Give Me a Reason" by the OB-Gyne Chorale. Then, the OB-Gyne Dance Group started the party upbeat mood with Bruno Mars' "Treasure". Chill again took the stage in a slinky black body suit to sing Beyonce's "XO". Then Richard Guzman (Patient Experience Officer in QC) and his guitarist sang a duet of Extreme's "More than Words" and successfully engaged the audience to sing-along.

Then from the audience area, Vianca Uy (nurse from SLMC-BGC) sang Alicia Keys' "If I Ain't Got You", followed by Jordan Ballesteros (nurse in Annex II-4th) singing John Legend's "Ordinary People".  I walked onstage to sing Robbie Williams' "Angels." That was my fourth song and last solo spot. Then Dr. Brodit and his whole family sang Bruno Mars' "Just the Way You Are" led by his two young sons. Jordan followed this with another John Legend song "All of Me" enjoining the audience to shine their cellphones in the air, which they did.

Dr. Kester Lim (Orthopedics) brought the house down with his rapid-fire rapping of Mackelmore's "Can't Hold Us," featuring Jordan and Vianca on the sung parts. The high spirits were kept up by the OB Chorale on the ubiquitous "Happy" by Pharell Williams. Everybody was dancing as this song was being sung, ending this segment with so much bouncing excitement. Believe it or not, I was also there on stage though all that high-NRG jumping and dancing! 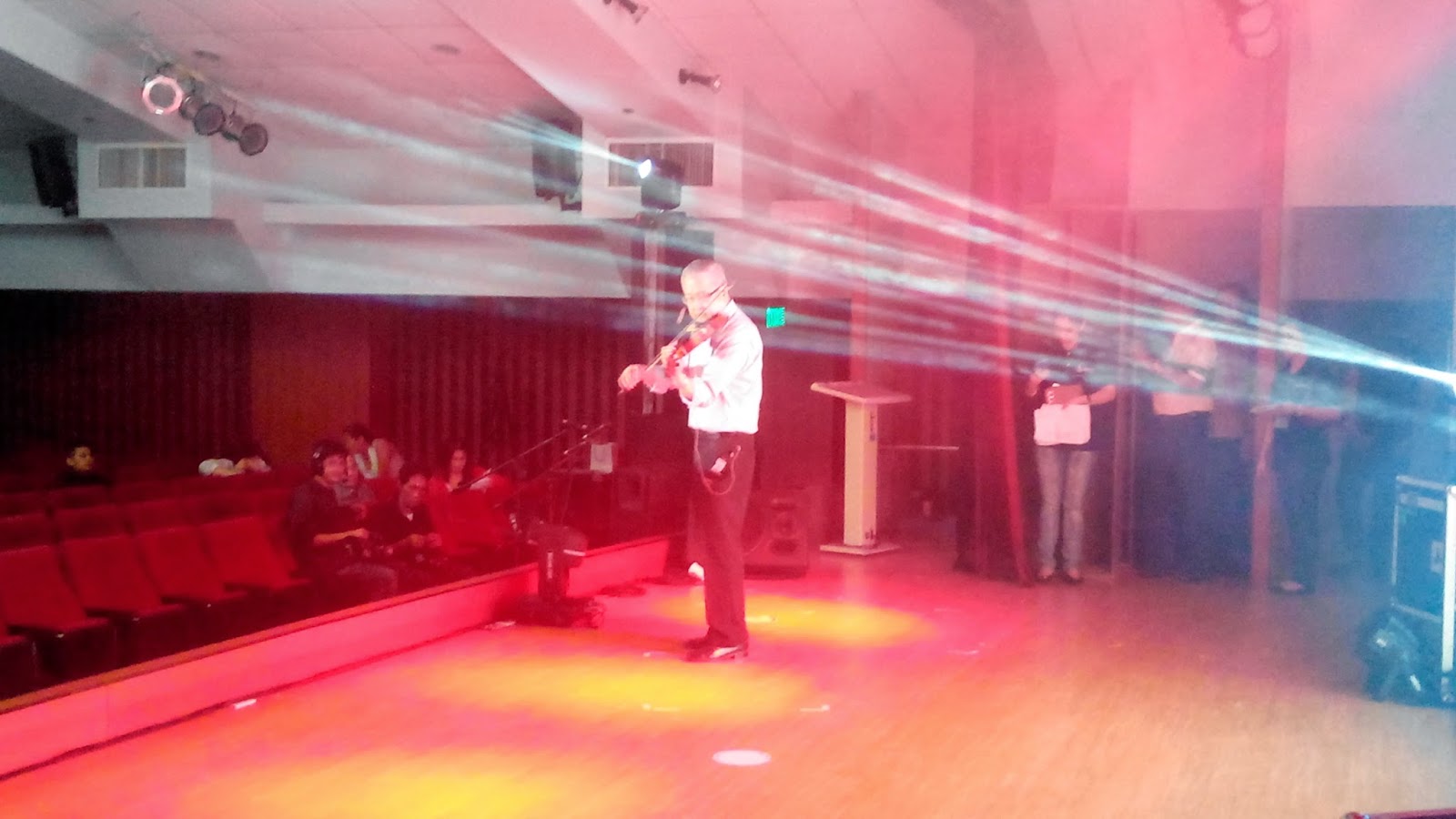 Dr. Narciso's violin playing was as mesmerizing during the rehearsals as it was in the show.

The last segment is Classical and Broadway. Dr. Francisco Narciso (Pathology) enchanted us all with his violin solo playing the complex piece "Czardas." TOSD again took the stage to sing "Love is a Many Splendored Thing" in harmony. My last song done, finale left. Up to now I do not really know how I did this night, but I am already very relieved at this point.

Dr. Maita Feliciano (ENT-NS) rendered her favorite ballad "Someone Like You" (from "Jekyll and Hyde"). St. Luke's Got Talent winner Suzette Liwag amazed everyone with her strong soprano pipes singing "I'd Give My Life to You" (from "Ms. Saigon") and "Light In A Million Mornings". Joshua Marquina, who won two silver and three bronze medals at the WCOPA last year, then came out to sing "Bring Him Home" (from "Les Miserables") to end the set.

Then it was time for the finale number -- "One Day More" from the musical "Les Miserables". With our guest Marquina as Jean Valjean, all of us performers went back on stage to sing this rousing song. I had some solo lines in there as Javert (a wish come true for me, hehe). As we sang the last line of the song, confetti showered the stage and all of us from all sides.

The curtain call was set to the tune of Pharell's "Happy" as everyone too their final bows. With that, we all congratulated each other for the general success of the show as all the tension in the past week suddenly got lifted off our shoulders. We were all very tired but so very happy we had been part of the celebration of a big and important anniversary occasion in a special way. 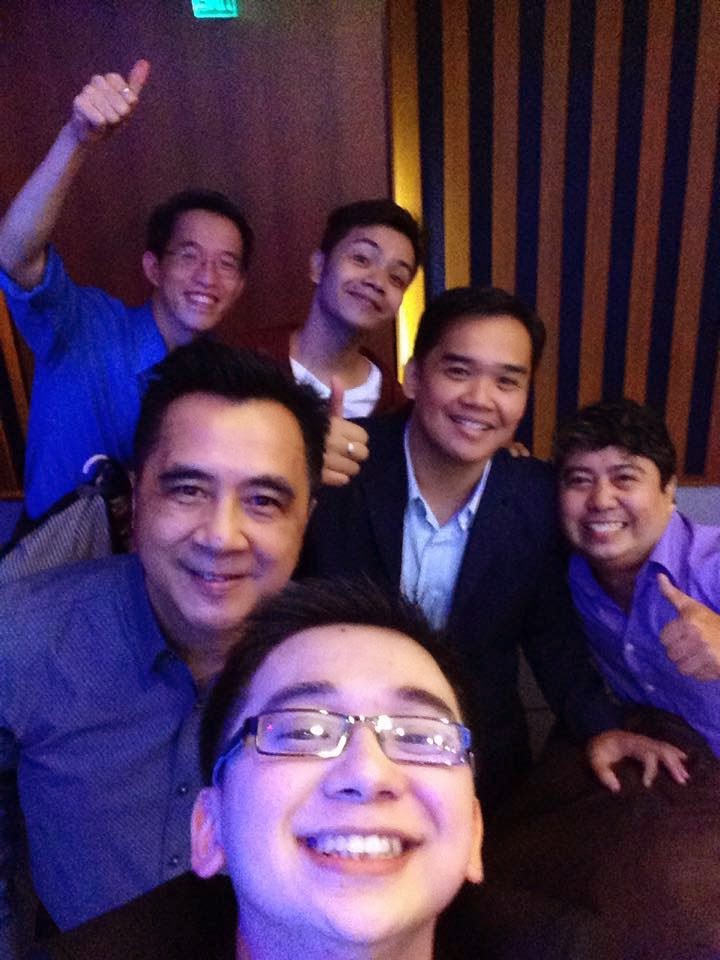 Selfie with Drs. Maranan, Brodit, Efendy, Sir Allan and Jordan.
Too bad there weren't more pics of all the participants together. 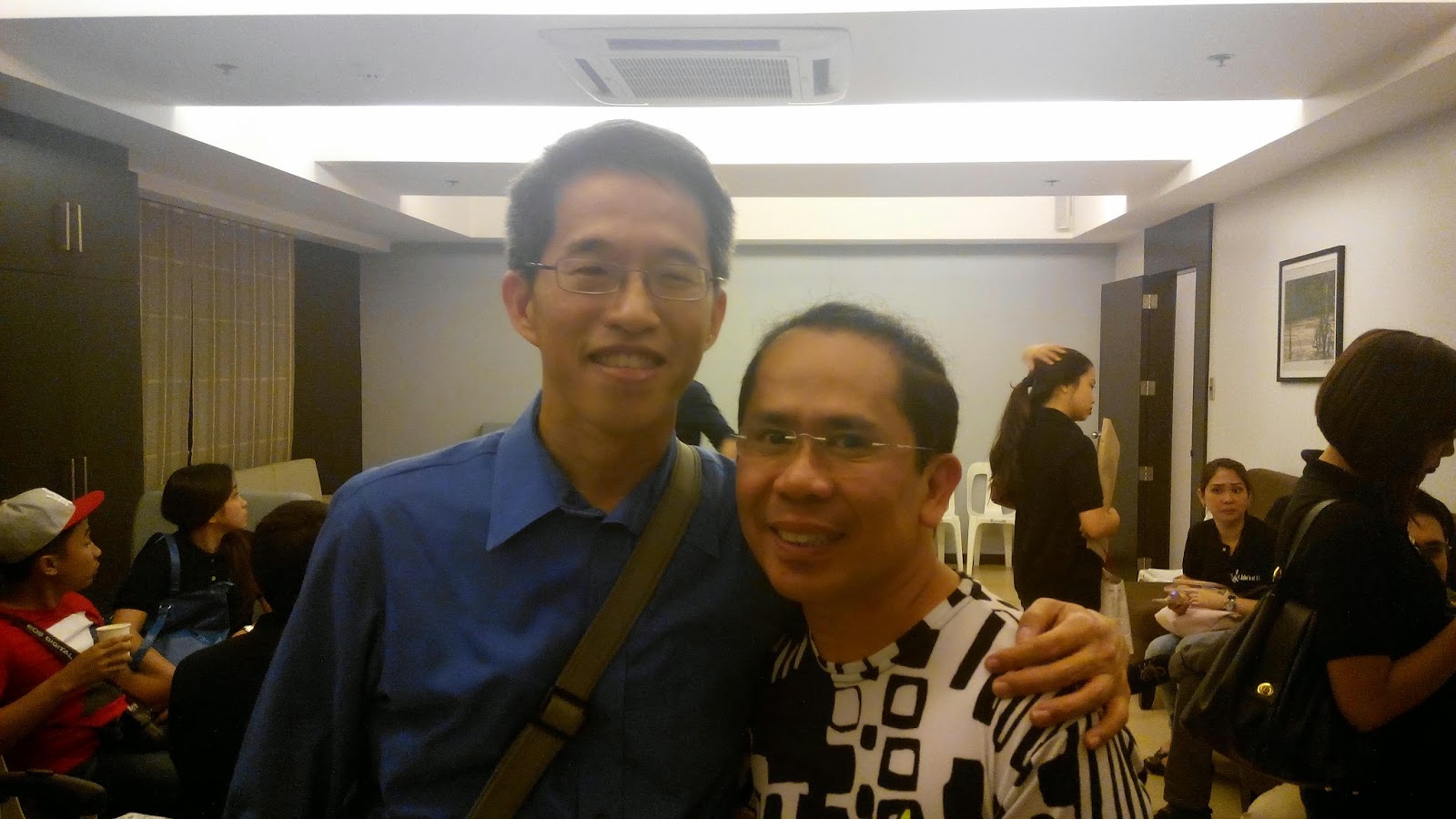 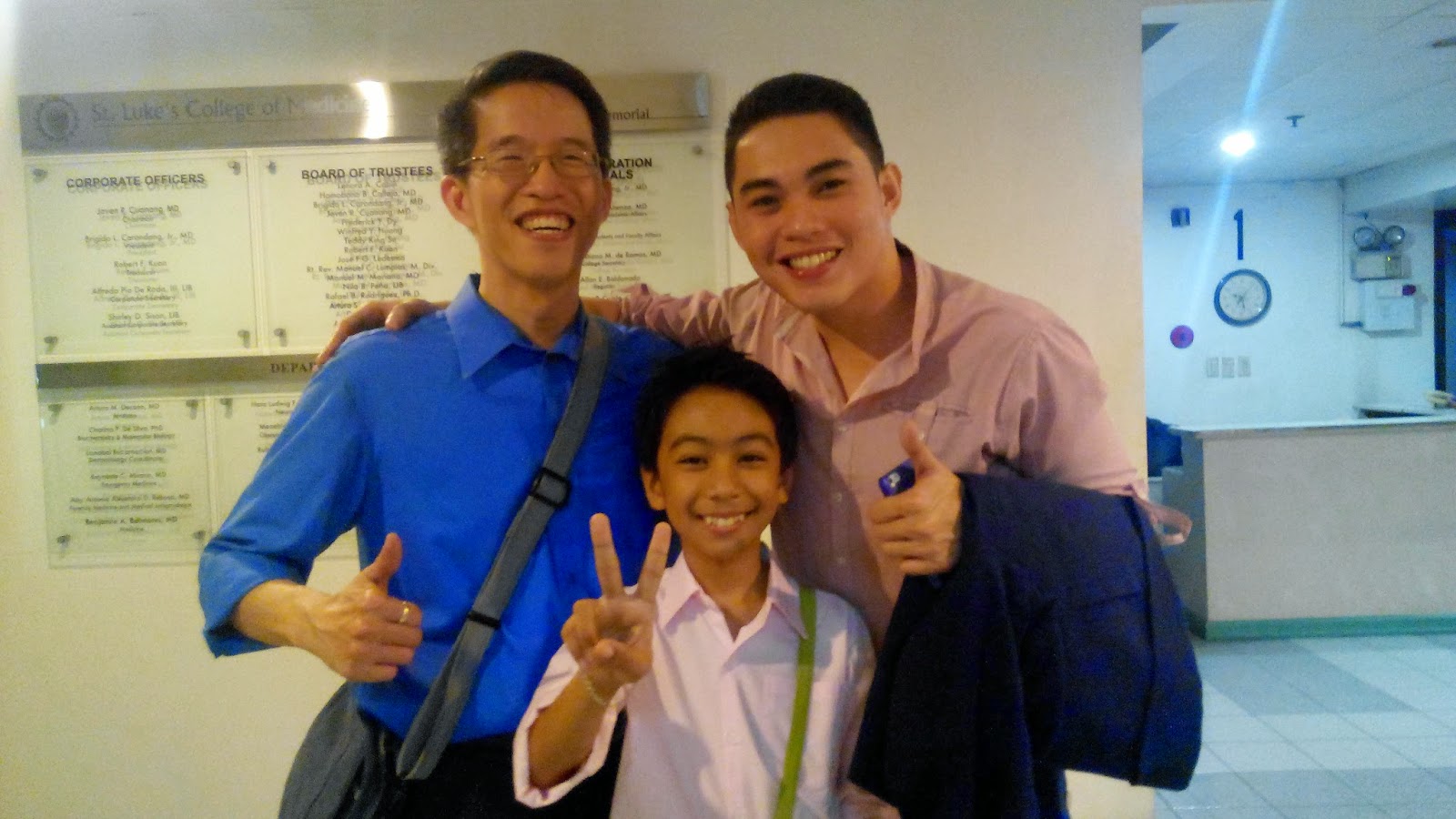 Pic with Josh and Earl