I have not been to the Solaire complex before today. First of all, I am not really a casino-goer. When they had concerts at their ballroom, like the Jacksons just earlier this month, the schedule did not fit mine. But today, I was invited to attend the inauguration of a facility which would make me return to Solaire time and time again. This was the Theater at Solaire. 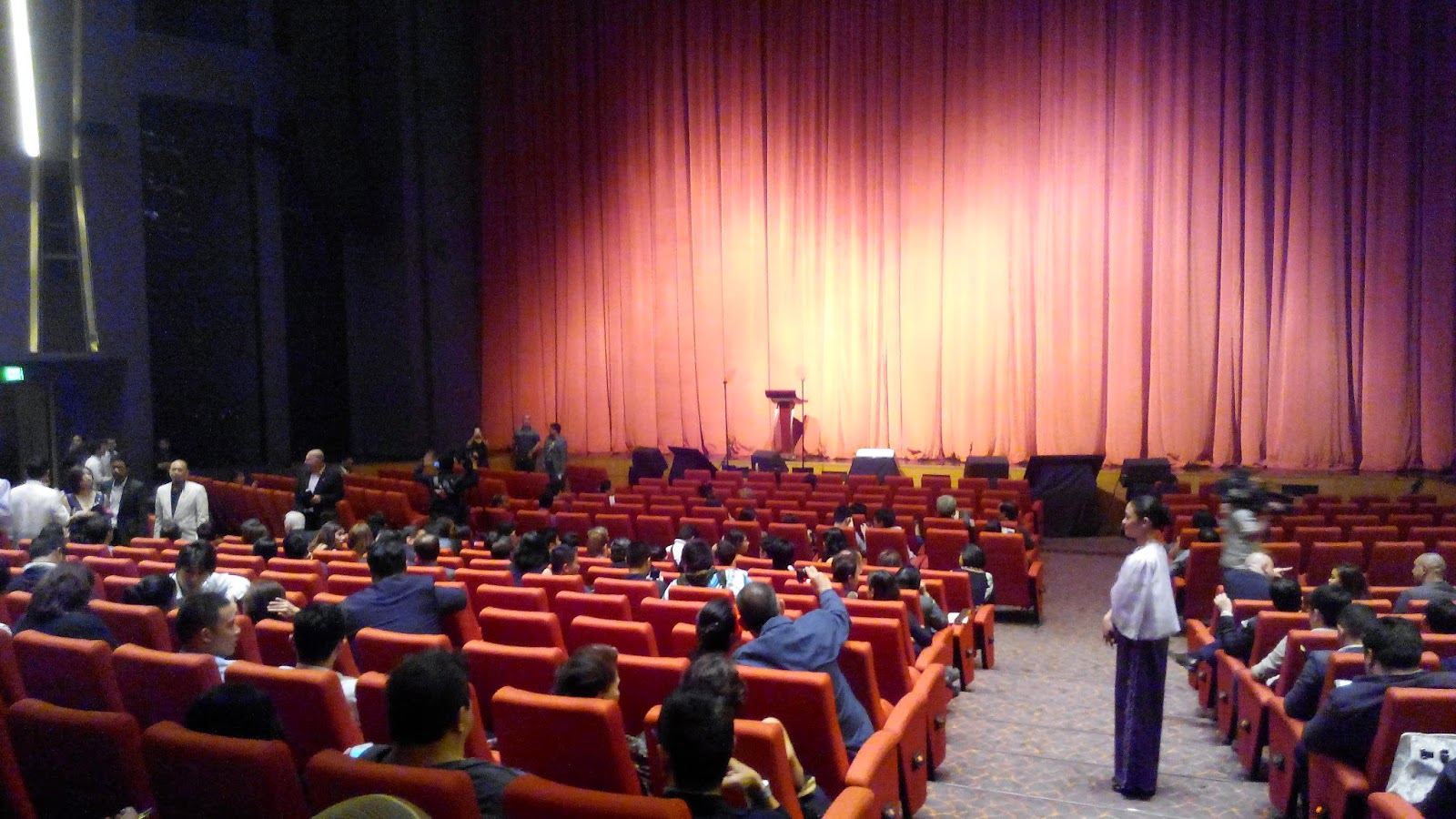 The theater had a spacious and elegant lobby. There were 1,760 seats inside. Its main conceit is its usage of the Constellation Acoustic System, which enables the acoustic properties of the theater fit that of the event being held, all with just a touch of a finger. Theater at Solaire is first and only theater venue with this sophisticated sound system, and only the third such theater in the whole of Asia. 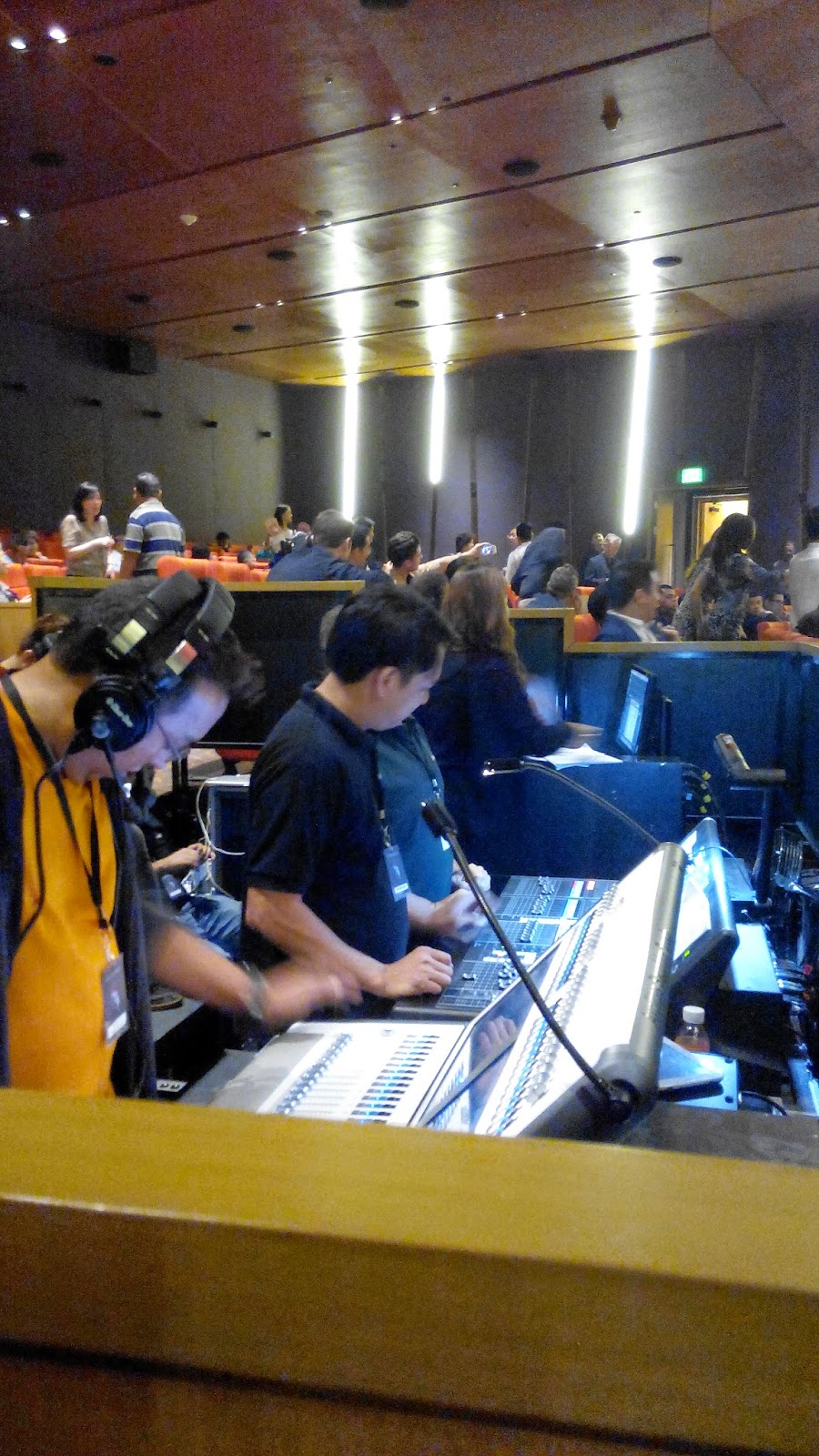 The guests were mostly dressed to the nines as the posh venue seemed to demand. There was a sumptuous buffet cocktail served along the corridor which included roast beef (rare!) and salmon among others. A particularly exciting souvenir given to the guests was a Solaire Swatch Watch, a limited edition made specifically to commemorate this special milestone.

The time in the ticket says 8 pm but the show began about 8:30 already with the assumption on the stage of Mr. Thomas Arasi (President and COO of Solaire), followed by Mr. Jasper Evangelista (VP for Brand and Marketing), with their respective opening remarks. Important people behind the theater were introduced. These were: Ed Concepcion (Theater Manager), Shax Siasoco (Venue Technical Director) and Sandy Hontiveros (Talent Center Manager). Finally, veteran stage performer Mr. Audie Gemora was introduced as Solaire's Director for Entertainment. 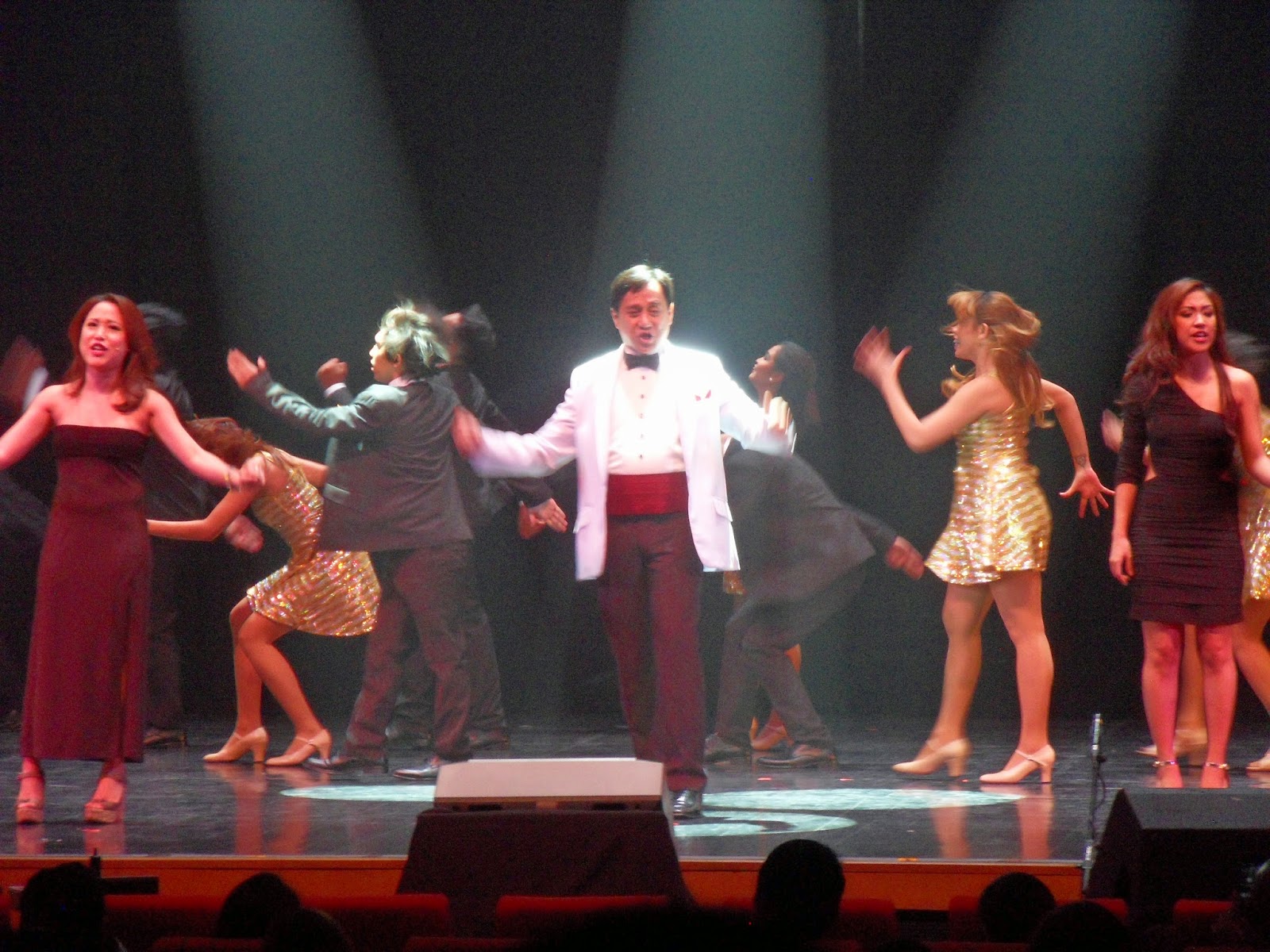 Mr. Gemora opened the show with his revue on how to put on a stage presentation, from a blank stage to the sets, costumes, screen backdrop, etc. until the show is ready, all set to the tune of "Putting It Together". Ironically, there were sound glitches in this first number where some lapel mics would lose sound. Not to worry though, these glitches would not happen again in the rest of the show. 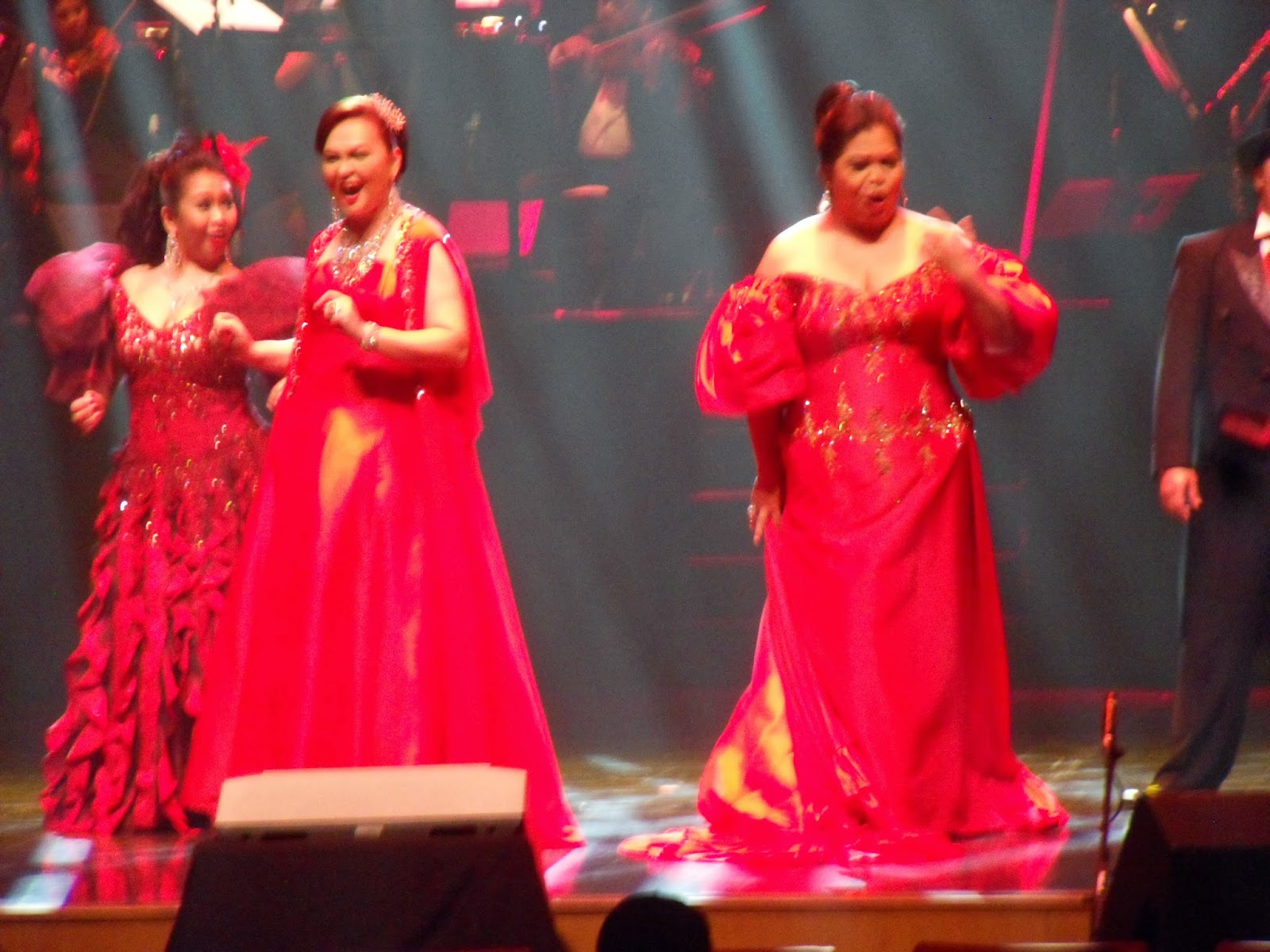 Gerard Salonga appeared on screen talking about the theater and its special sound system. He came out on stage to demo the equipment with musician Robert de Pano and his trumpet. You can clearly hear the difference of sound quality with the Constellation on and off. After his short talk, Salonga went back to lead the ABS-CBN Philharmonic Orchestra in a Classical Suite.

The three leading sopranos rendered solos, Karla Gutierrez, Myramae Meneses and Camille Lopez-Molina. Ervin Lumauag provided tenor counterpoint in certain songs, as other members of the Philippine Opera Company joined in others. The big highlight of this suite is the appearance of prima ballerina, Ms. Lisa Macuja-Elizalde and some male consorts from Ballet Manila. She danced a challenging number from "Sleeping Beauty" with her faultless pirouettes. 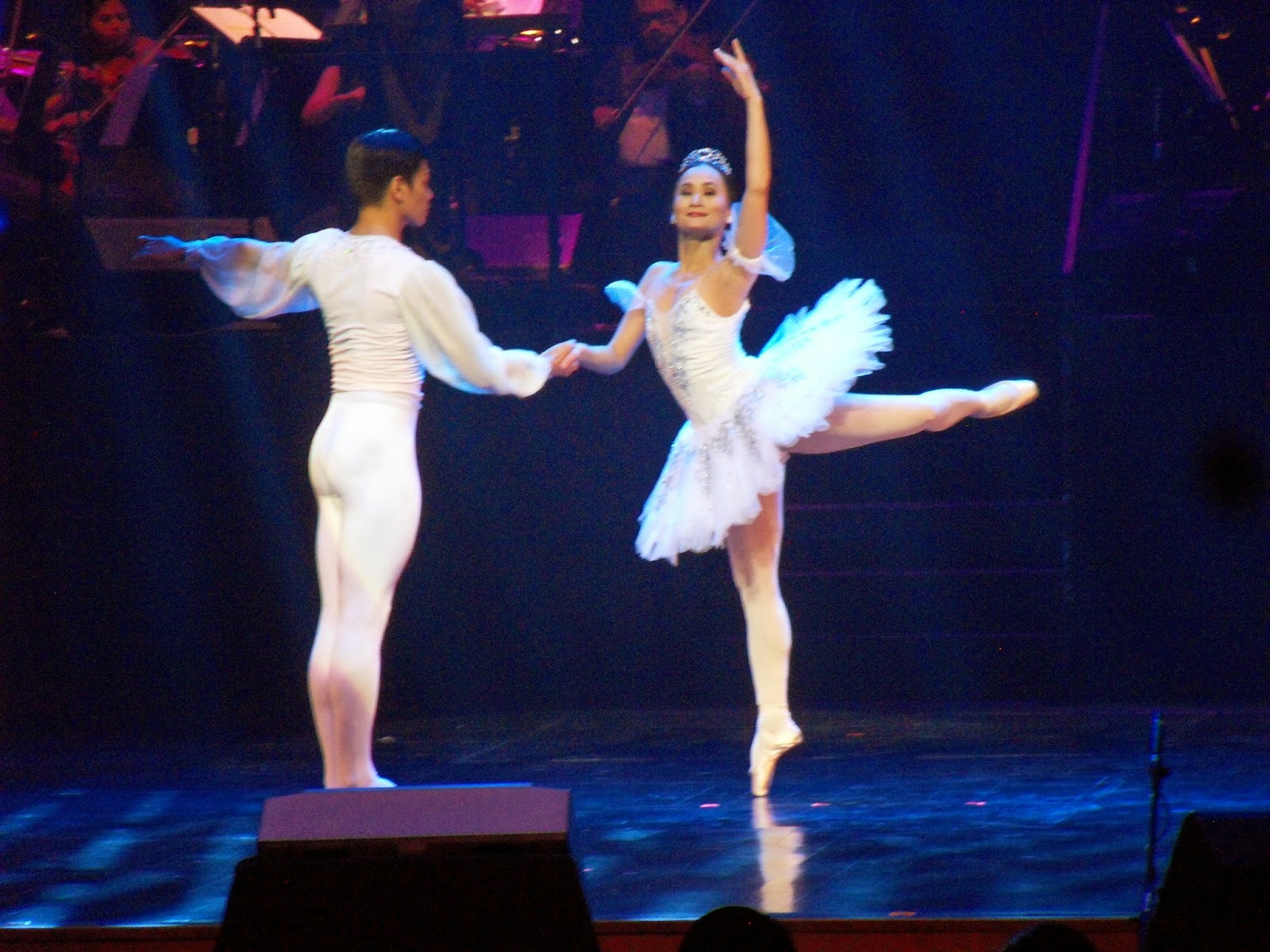 Maestro Ryan Cayabyab appeared on the big screen to talk about the multi-purpose rehearsal studio located backstage. He would segue to introduce the next suite about Filipino musicals. Robert Sena and the Ryan Cayabyab Singers (including Poppert Bernadas) would sing a song from "Stageshow." Karylle sang a song from "Rama Hari". Myke Salomon sang "Magsimula Ka" from the musical of the same title. Isay Alvarez sang a uptempo boogie number from "Katy!" Aicelle Santos sang "Basang-basa sa Ulan" from the mega-hit "Rak of Aegis". She would be joined by Sena and Salomon for "Halik." Finally, Ms. Isay came back onstage to sing "Minsan ang Minahal Mo ay Ako", later joined in by the others, to end this suite.


Ms. Solaire and Ms. Philippines-World Valerie Weigmann appeared on the big screen to talk about the dressing rooms and the other events which could be held in the theater. Sam Concepcion came out to sing Pharell's "Happy". He would be joined by a number of Solaire models. This segment would showcase different kinds of dancing. First up was Ednah Ledesma and two male partners for a ballroom exhibition. Regine Tolentino was fiery and fabulous in her dance number with the 38 Degrees, who lifted, flipped and threw her around. The Manoeuvres had an interesting dance number with only the LED lights on their costume visible in the total darkness. 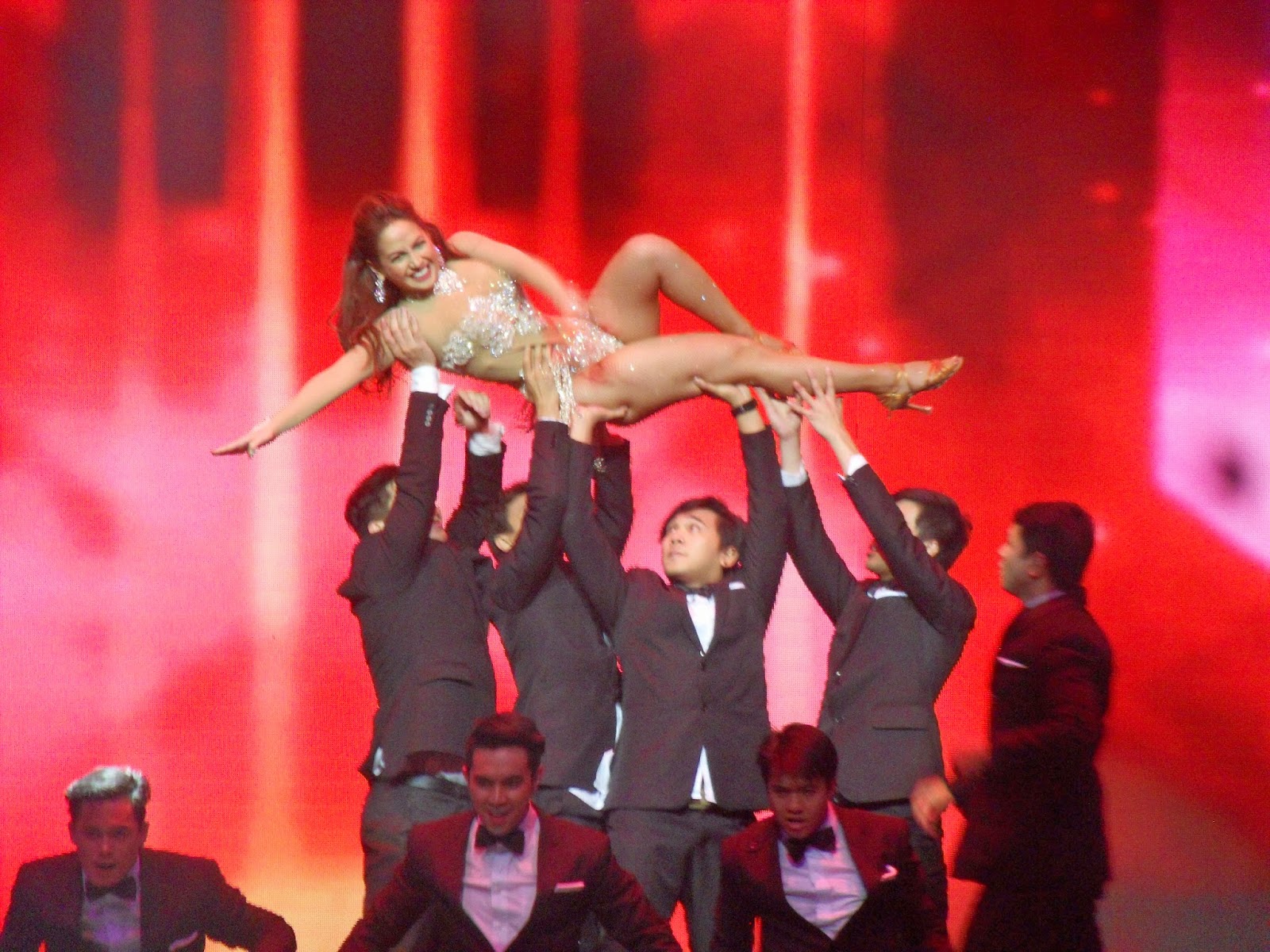 Mitch Valdez was the next person who introduced the next act on screen, the OPM Suite. Morissette, Christian Bautista and Yeng Constantino all had their solo spots, which were well and good. However, it was when they got together to sing "Sana'y Wala ng Wakas" that their set was elevated to different level. Their harmonizing sounded so very good indeed.


Martin Nievera came out to sing his solo spot with the song "Kahit Isang Saglit." He then sang a little bit of "Music of the Night" (from "Phantom of the Opera") to introduce the final performer of the night.

Lea Salonga was on fire as she sang for ten minutes or so straight, with a medley of punishing Broadway songs that only she can sing so flawlessly well -- "Memory", "I Dream a Dream", "On My Own", "For Good" and to cap it all off "Defying Gravity". Words cannot adequately describe the power and the passion in her renditions of these iconic songs. You really have to watch the video below from beginning to end to know what I mean!

Audie Gemora came back on stage to reminisce with Lea about the last time they were on stage together, which was when Lea was only 9 years old. Then they led off to sing the Solaire song "Brighter Than the Sun". Everyone else in the cast of performers later joined in as well. The end of the rousing song was greeted by a merry rain of confetti, and this special night was over. 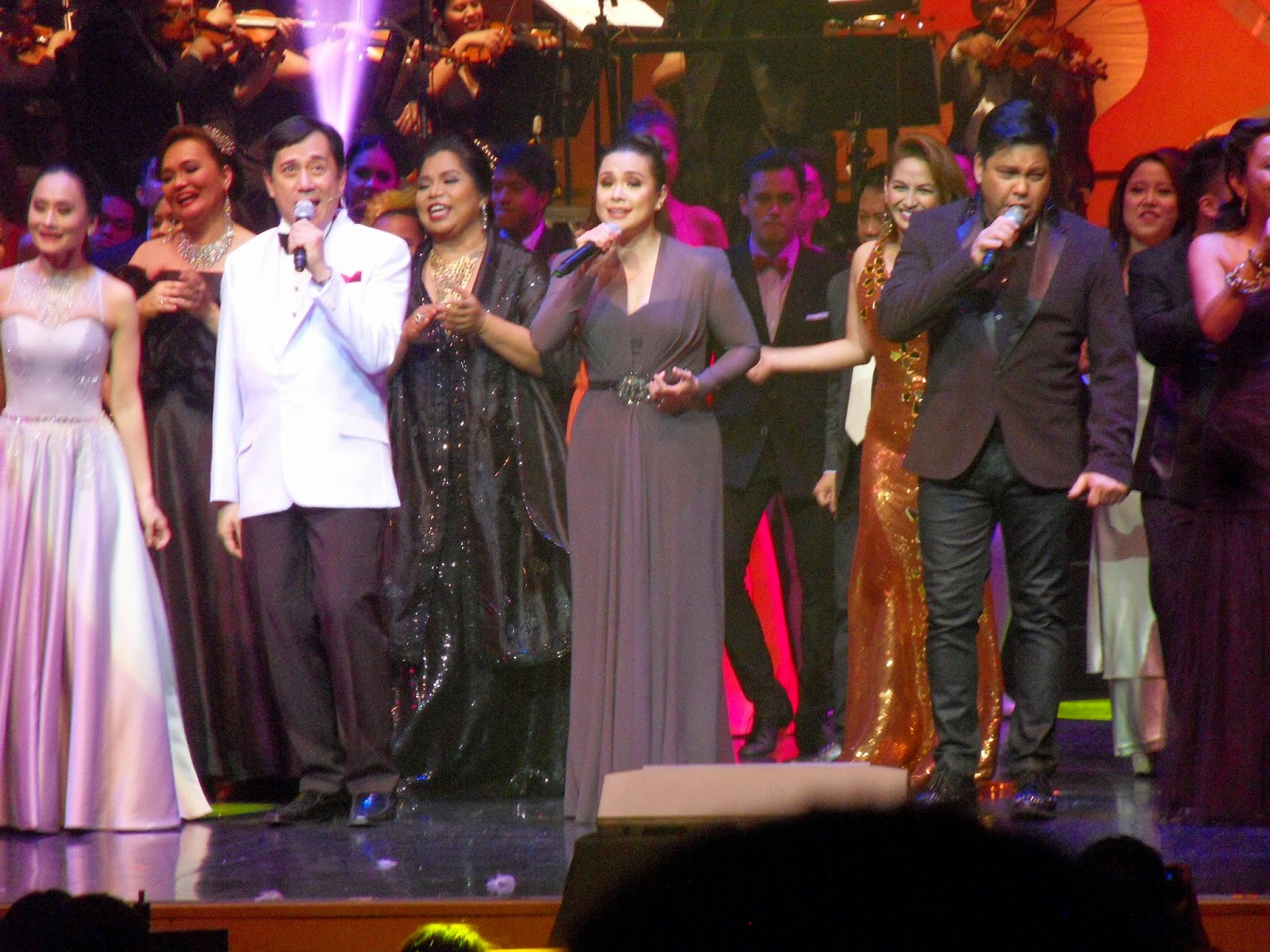 The top-notch production staff behind this show is a Who's Who of current Philippine Theater. The director is Dexter Santos. The writer is Floy Quintos. Production design is by Mio Infante. Lighting design is by John Batalla. The impressive graphic designs were by GA Fallarme. Kudos to all for a great show! 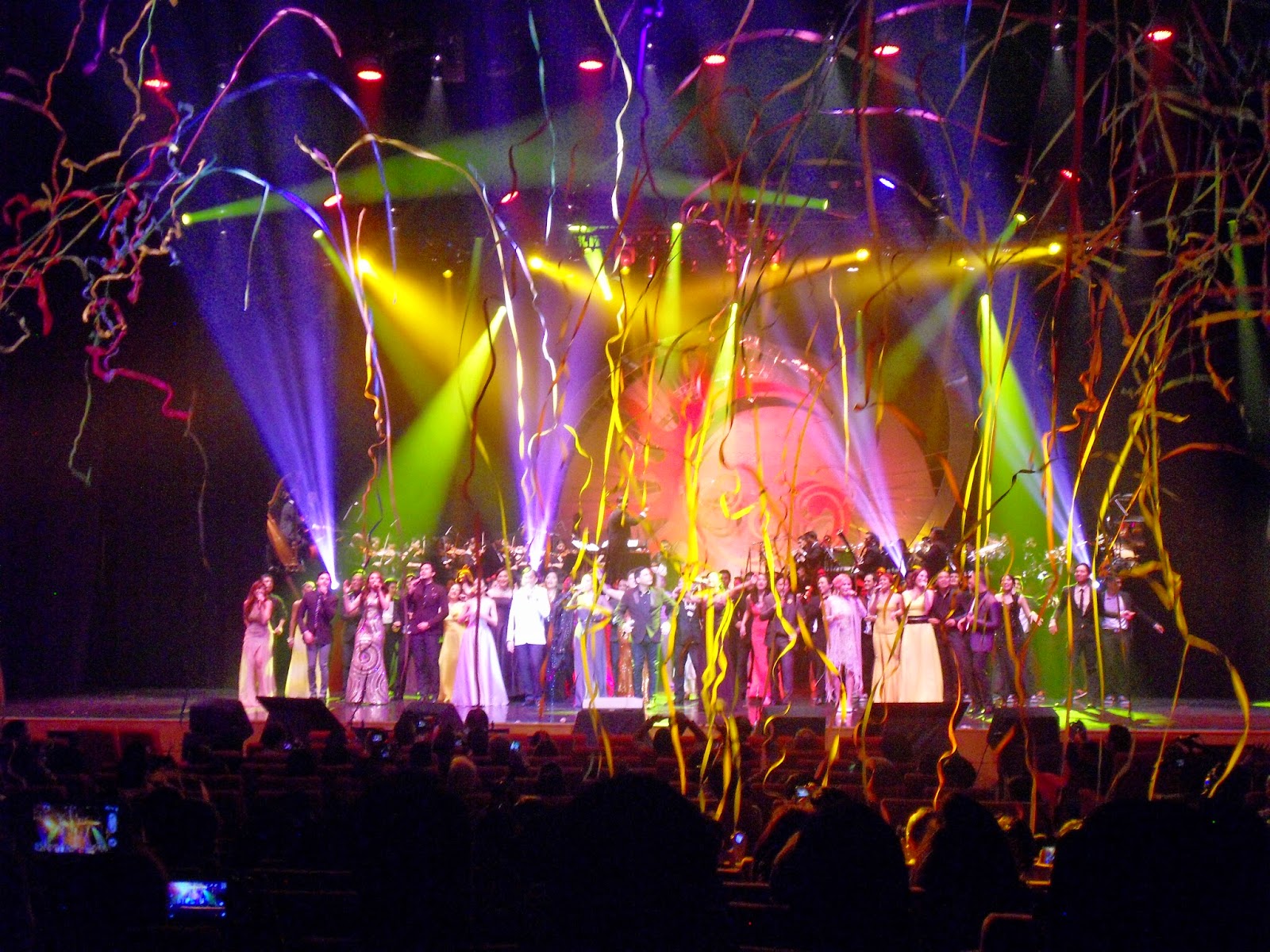 Postscript: There was a bit of a problem for guests on their way out as there is no elevator or escalator going upstairs back to the theater lobby! Everyone had to climb up the steep high escalator or the regular stairs (three flights up!), even the ladies in their high heels (including Ms. Annabelle Rama, who was there with husband, Eddie Gutierrez). I am pretty sure though that the Solaire management will have this problem figured out in time for the big maiden presentation of this theater -- the international touring production of CHICAGO to run by the first week of December.