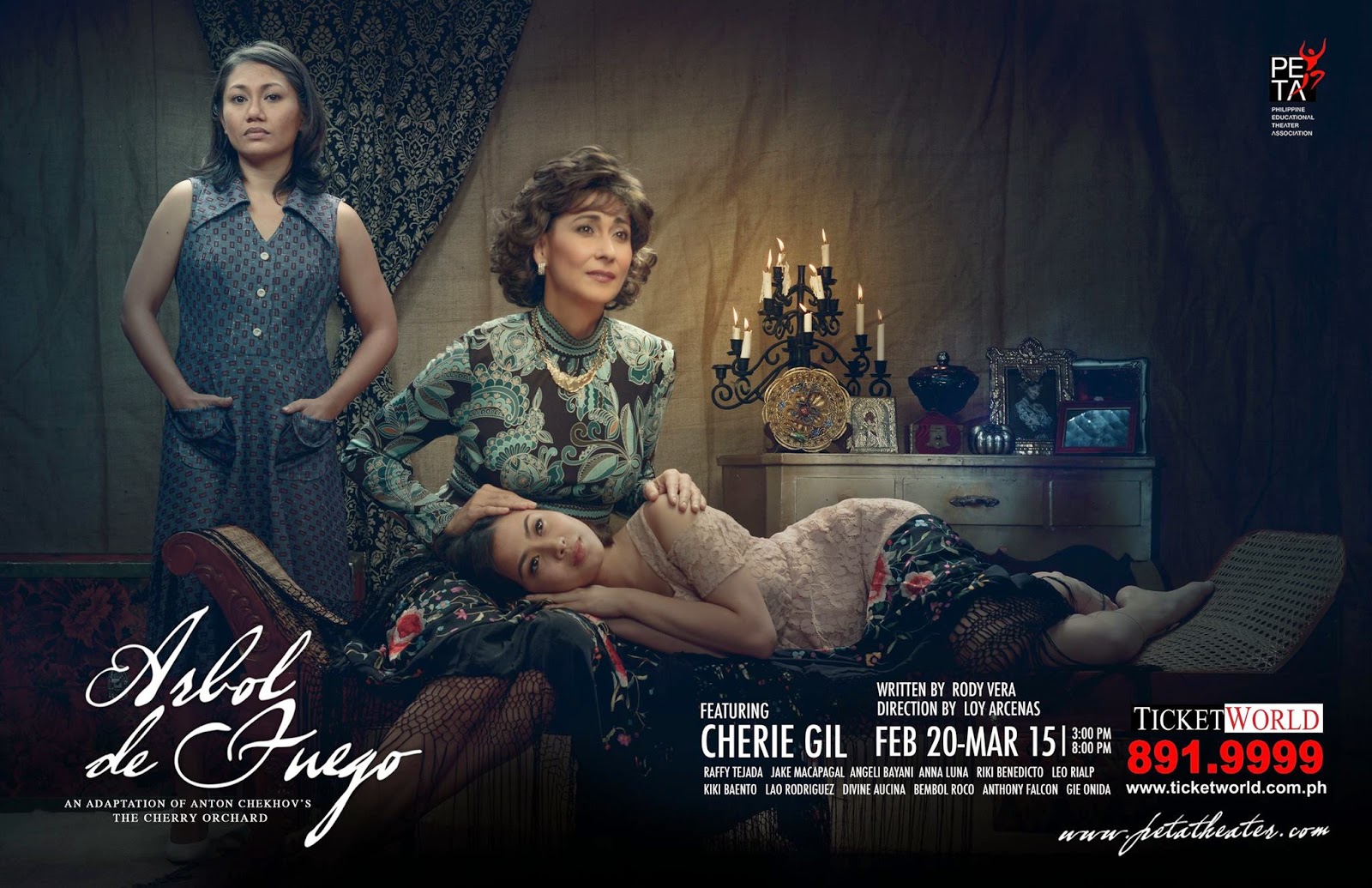 Anton Chekhov is one of Russia's greatest playwrights. There are three plays he is most remembered for. These are "The Seagull" (1896), "The Three Sisters" (1901) and his last play, which debuted only months before his death in 1904, "The Cherry Orchard." PETA's latest offering "Arbol de Fuego" is a Filipino adaptation of "The Cherry Orchard" written by the prolific Rody Vera.

The story of "Arbol de Fuego" revolves around the decline of a landed wealthy family . The play is set during the Martial Law days in Talisay, in Negros province. Enriquetta Jardeleza-Sofronio returns home after five years of living in Madrid, only to discover that their family now stand to lose their their beloved farm and estate known for its titular grove of flame trees. Nonoy Tiking, a son of the Jardeleza's former sugarcane farm hand who became rich with his businesses, suggests big plans to save the land by cutting down the flame trees and making a subdivision. Enriquetta simply cannot accept this solution, but it appears inevitable. 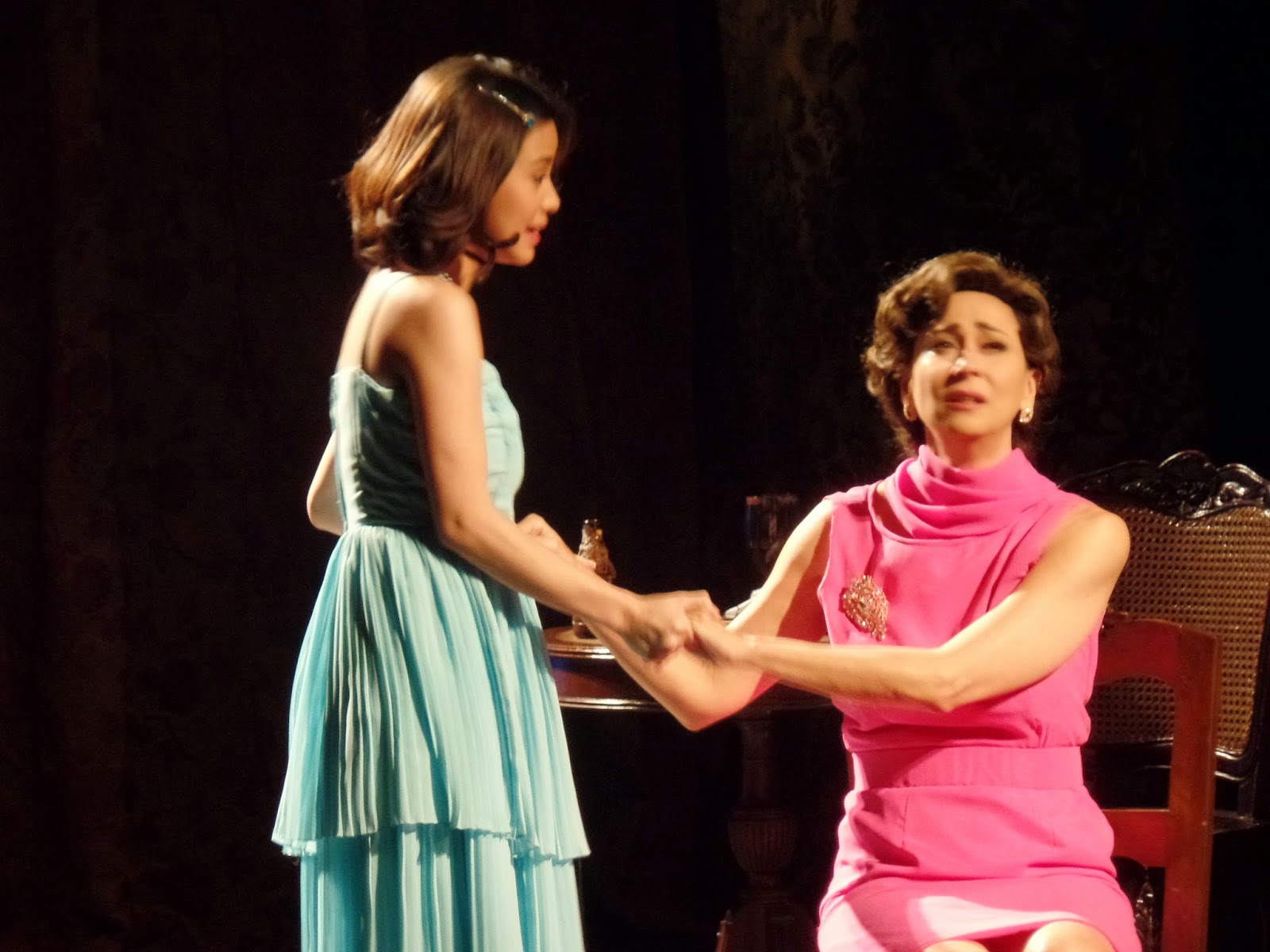 
Cherie Gil was flawless as Enriquetta. She is tall, beautiful, classy, the perfect insulares aristocrat. She possess the whole stage whenever she was on it. Her comic timing was impeccable and so charming. There was even a scene when the spotlight was on something else, but Ms. Gil can still draw audience attention with her dancing antics in the dark on the side of the stage. I had seen Ms. Gil in two one-woman shows before, where she inhabited big diva characters Maria Callas and Diane Vreeland. "Arbol" proves that she also be part of a big ensemble, but really she can't help but stand out. Best Actress awards are definitely forthcoming for this performance. 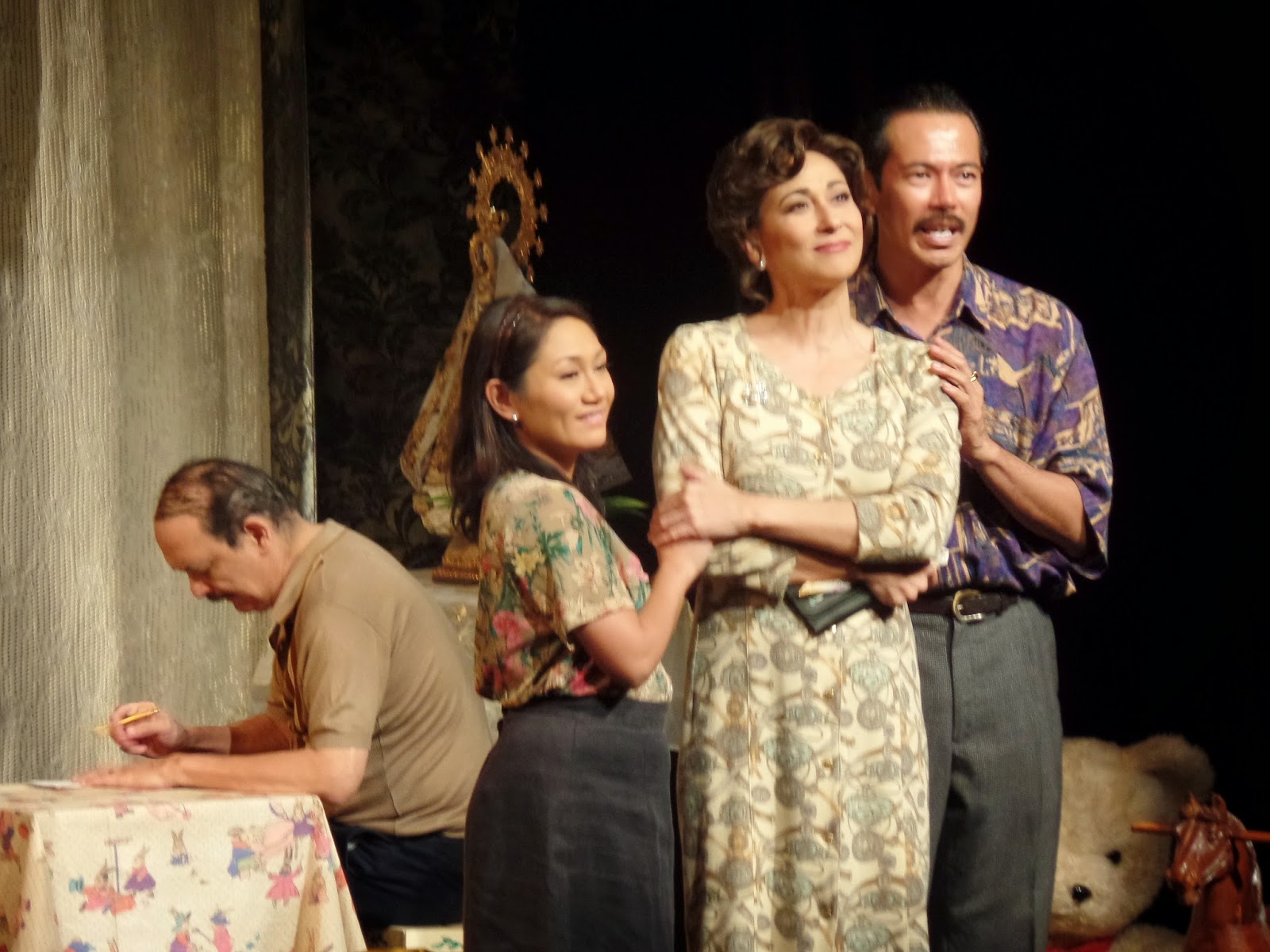 
Jake Macapagal, with his tough exterior and moreno complexion, did not seem to be the right actor to be cast as Adjie, the effeminate brother of Enriquetta. But again, he effectively went against type and imbued this character with so much delightful idiosyncrasies. Another transformative performance was that by Leo Rialp. This tall Hispanic actor usually played haughty rich men, and he can play those with his eyes closed. Here in "Arbol", he played family friend Chitong, an unkempt man with disheveled clothes with a bad reputation for borrowing money and a bad comb-over. He totally nailed this sadsack character so much against what we knew him for. 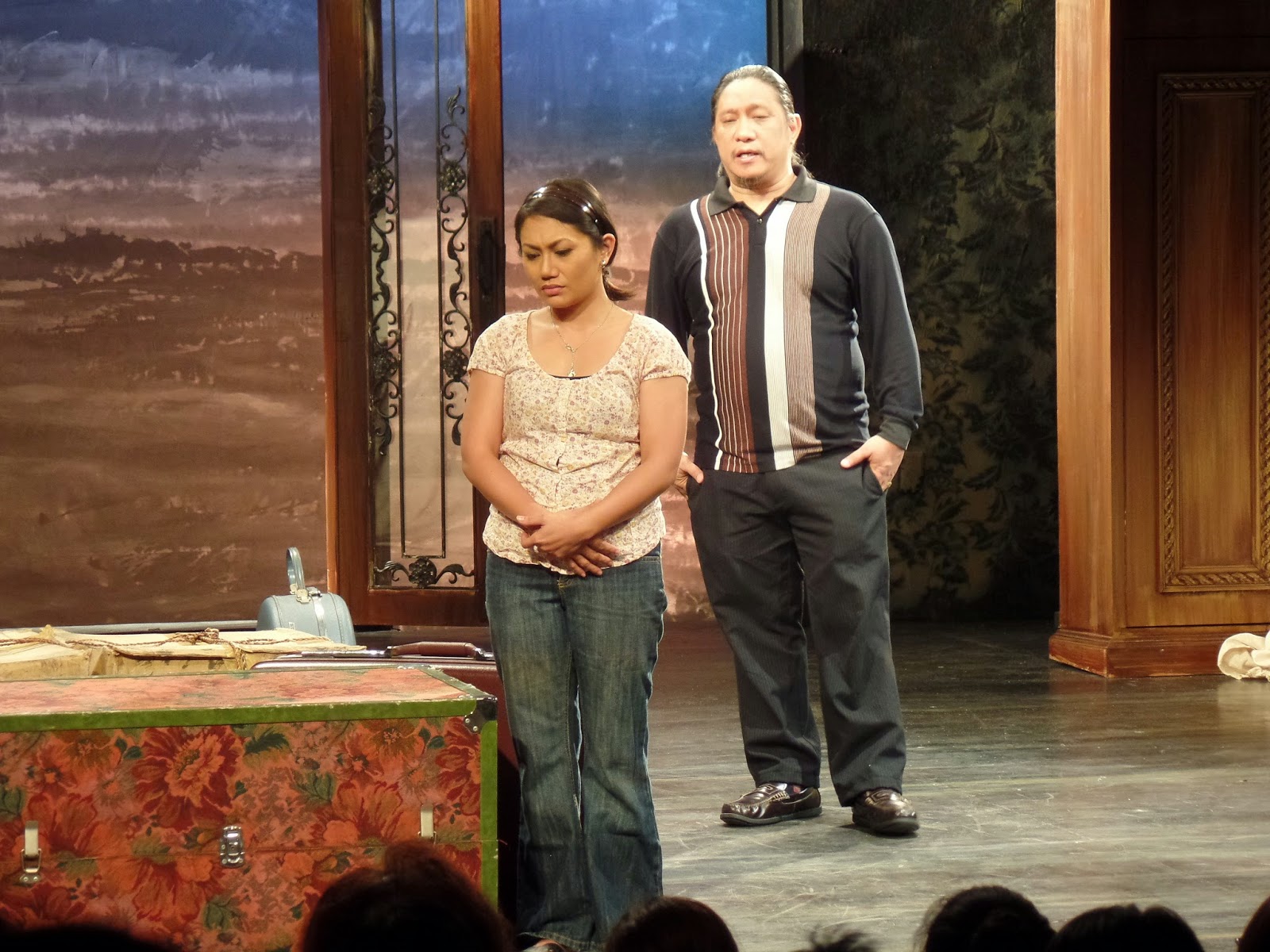 Angeli Bayani is perfectly cast as Charito, a mousy spinster but nonetheless, an efficient caretaker of the estate. Her character is being teased with that of Nonoy Tiking, everyone thinking they are a couple bound for the altar. Her frustration with his failure to commit and propose to her was portrayed so well. Raffy Tejada did not immediately seem to be the correct actor to portray Tiking because of physical mismatch (long hair, beer belly), but he eventually grew into the role as the play went on.

Enriquetta's optimistic daughter Carmen was played by the upcoming indie actress Anna Luna. Her character's partner onstage is Dante, an idealistic perpetual college student, played by Riki Benedicto. The two don't really look like they make a good pair at first, but their parts were written and played out so well, with much romantic thrill. 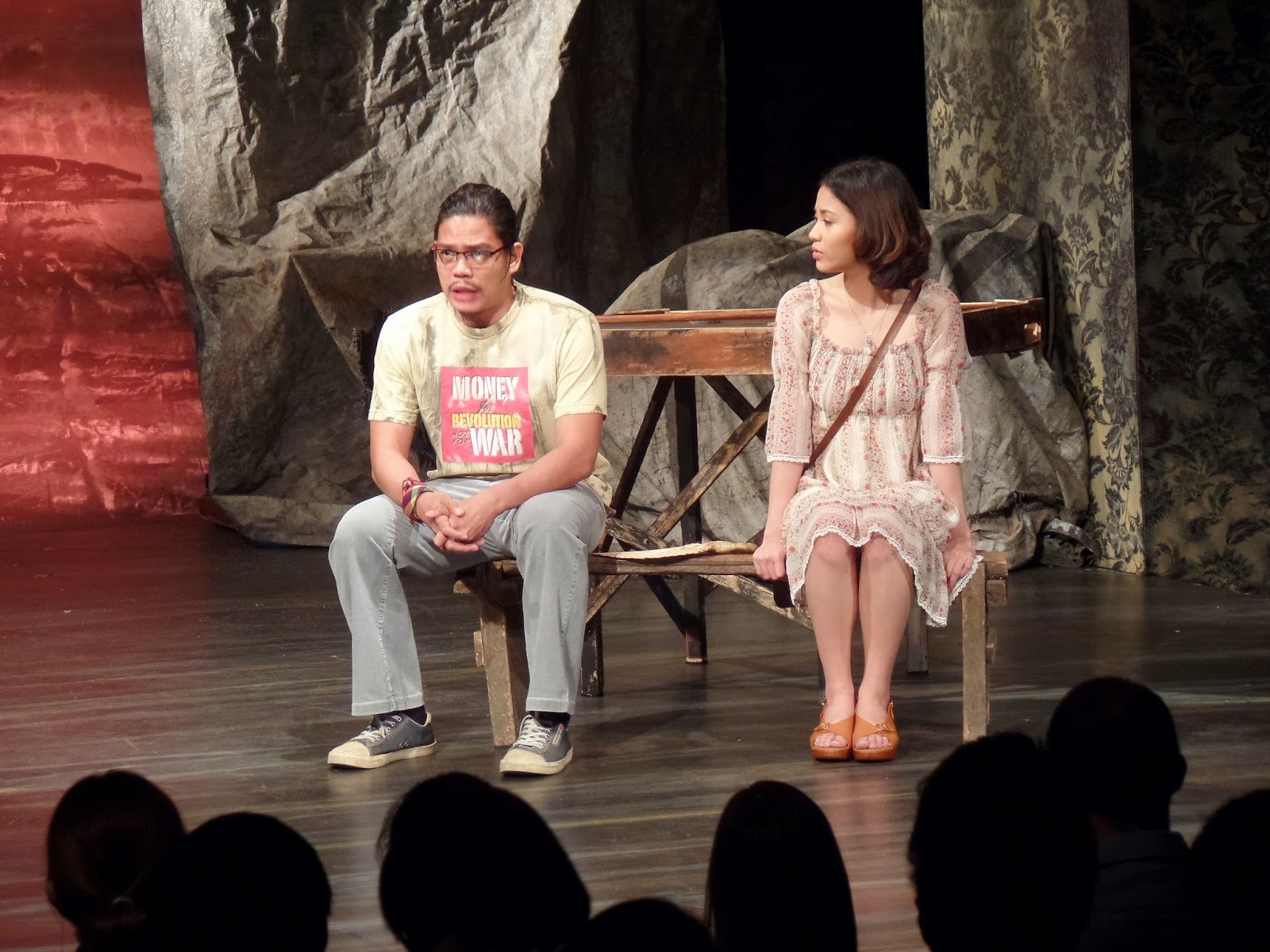 What drama about the aristocrats would be complete without the servants, who are also with their own little dramas. The scene-stealing standout is really Divine Aucina, who was hilarious as Ling-ling, the flirtatious maid. I have to say though that I was confused as to what role Anthony Falcon played here. His good looks and stylish clothes seem to go against his character Caloy's social standing. He would probably be better suited in the Dante role. Bembol Roco plays the role of Manoy Iking, the mayordomo, who is already slowly becoming senile. The role was awkward as written, but Roco played him with dignity. 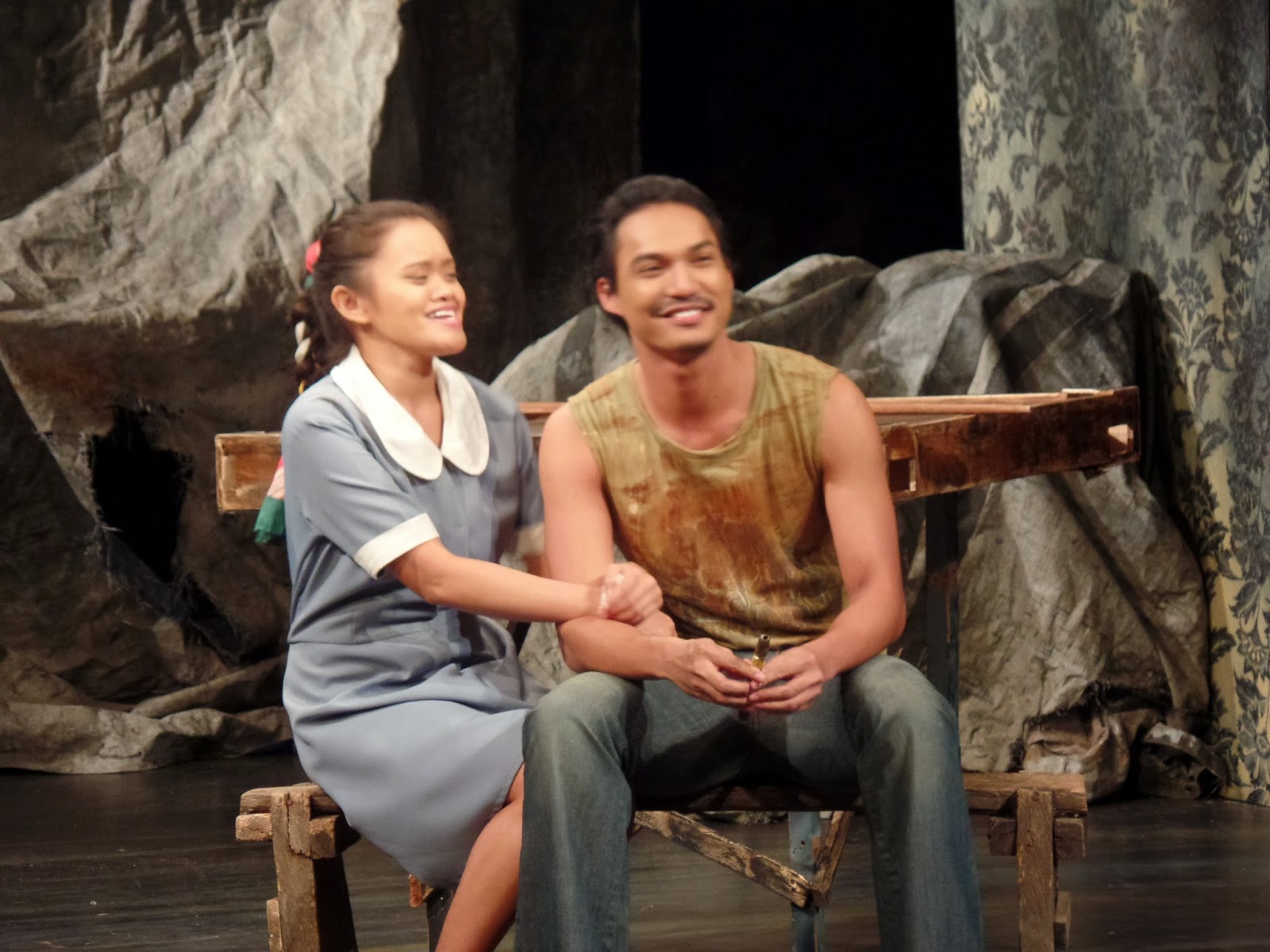 I was expecting "Arbol de Fuego" to be a heavy drama, especially when I saw that top rated dramatic actors are playing the leads. However, I was very pleasantly surprised that there was so much humor in it. Writer Rody Vera's Filipino adaptation has brought out the farcical elements of Chekhov's drama, chock full of sociological sarcasm. The actors really took their roles to heart. They delivered their kilometric lines in thick Bacolod accent with so much heart and passion, with their sense of humor fully intact. The dynamics between the actors on the stage are riveting and a joy to watch.


Congratulations to director Loy Arcenas and the rest of the PETA cast and crew for another excellent and memorable production. This play should be amply rewarded come awards season later this year.